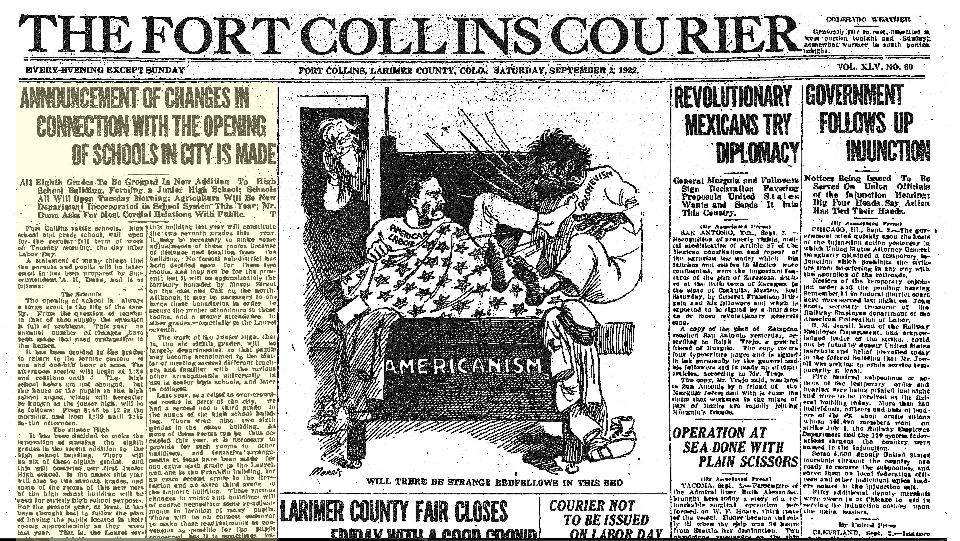 The Fort Collins Courier from September 2, 1922 as found on ColoradoHistoricNewspapers.com.

On Saturday, September 2, 1922, Fort Collins residents opened their newspapers to find an announcement from Albert H. Dunn, the superintendent of schools, on the front page. After several years of talking about it, the city of Fort Collins was finally going to have its very first junior high school. Up until that time, kids attended grade school from kindergarten to eighth grade, at which point many moved on to find employment or to get married. But by reorganizing seventh and eighth grade into a junior high format, it was hoped that students would get a taste of what high school would be like, and they’d choose to continue their education.

In elementary schools, students remained in one classroom all day long, usually with only one instructor. They learned the basics: reading, writing, mathematics, history, etc. In high school there was an entirely different format to the day. Students had a series of teachers, each one knowledgeable in the specific field in which they taught. And students were expected to begin considering broader topics, such as Agriculture (which was added to the high school curriculum the same year that the Junior High was born). 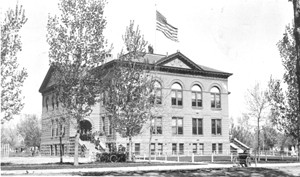 Fort Collins High School was formed in 1889. It was housed in a couple of other buildings before this one was built on Meldrum between Mulberry and Magnolia in 1903. (This photo is from the Fort Collins Archive – #H09765.)

The idea of having a transitional period between grade school and high school started to take hold in America in the 1910s. The first junior high in the U. S. was established in 1910 in Berkeley, California.

One of the earliest mentions of junior high schools in the local newspaper was an article on August 25th, 1915 that explained to residents what a junior high was. According to the article, fifty-seven cities across the United States had junior highs. New York City and Los Angeles were leading the charge in converting to this cutting-edge educational format. By 1919 there appears to have been regular discussions among the school board, as well as among residents, regarding the creation of a junior high system in Fort Collins. There was also a lot of talk at the time about how crowded the schools were. 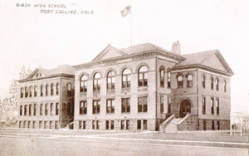 An addition had been added to the south side of the high school in 1915 (towards Mulberry Street). Though some wanted to build an entirely new high school, others felts a second addition to the current building would be sufficient. The plan for the addition won out and in 1921, the building was extended towards Magnolia. In 1922, the newspaper announced that “It has been decided to make the innovation of massing the eighth grades in the recent addition to the high school building. There will be six of those eighth grades, and this will comprise our first Junior High school.”

By collecting all of the eighth grades, and a couple of the seventh grades, together into one building, students could receive instruction from a variety of teachers who were experts in their discipline (as opposed to when the eighth grades met in the grade schools and had only one teacher covering every subject). Not all of the seventh grades fit into the new annex of the high school building, however, and these remained in their respective grade schools for the time being. (It also appears that 2 eighth grades remained in place — one at Laurel School and one at Remington School. No explanation is given as to why there was room for two 7th grades in the new annex but the two 8th grades would have to meet elsewhere.)

All of the seventh and eighth grades were governed under one principal, Miss Margaret Demmel, formerly the principal of the Laurel Street School.

In 1924, the high schoolers were finally to get their new school building, located at 1400 Remington Street (now CSU’s University Center for the Arts). In Robert Pike’s history of Fort Collins High School, he wrote, “Friday, May 9, 1924, was a cold, windy day in Fort Collins. However it failed to dampen the spirit, excitement and enthusiasm of the large audience that witnessed the laying of the cornerstone to the new $400,000 Fort Collins High School building…. High school and junior high had been dismissed for the occasion.”  The students walked together from their old building to the new Remington Street site. 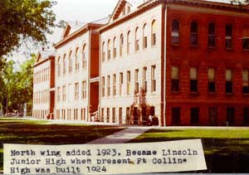 The note under this photo isn’t quite accurate as the annex was finished in 1922 and the junior high wasn’t called “Lincoln” at the time that it expanded to take over the entire building in 1925.

The junior high wasn’t given any particular name, just as the senior high hadn’t been when it was formed in 1889. The high school was simply called the Fort Collins High School and the junior high was Fort Collins Junior High. But in 1939, the students at Lincoln Elementary wanted to honor their well beloved principal and former teacher, Margaret “Mame” Harris. They decided to change their name to Harris Elementary. That is when the junior high decided to take the name of Lincoln for itself, becoming Lincoln Junior High School.

The junior high continued to grow and became so crowded by the end of the 1950s that a second junior high was built for the district. Named after former schools superintendent David Lesher, it was built further from the center of town in the new University Acres subdivision (on the site of the former CSU experimental farm). The Lincoln Junior High PTA group was so excited about the creation of a second junior high that they clipped all of the newspaper articles about the new building and put them into a scrapbook which is still located in the Lincoln Middle School library today. 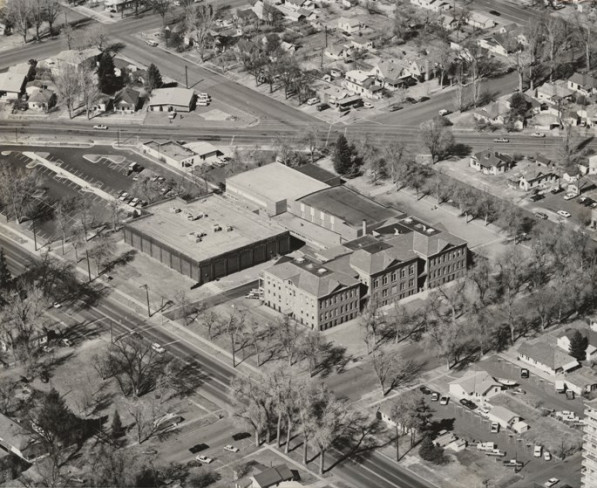 Aerial photo of Lincoln Junior High around 1974, just before it was remade into the Lincoln Center. The Mulberry pool (seen to the left of the school) was newly built.
(Photo from the Fort Collins Archive – #H25122.)

By the 1970s, the community felt that they needed a performing arts center rather than using the auditoriums of the junior high and high school buildings. Elliott Heidekoper, a farmer who owned land to the northwest of town along Vine Drive, donated just under 70 acres of land to the school district to be used for a new junior high. In 1975, the new school was completed and the transition was made. The old Lincoln Junior High was torn down (although the gymnasium on the west side was retained) and replaced with a new performance space, the Lincoln Center, named after the school that formerly stood in that location. 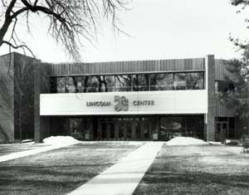 The new Lincoln Junior High was built without ornamentation in a modern style in which geometric forms were combined to create patterns of shapes. Long hallways with floor to ceiling windows provided natural light and two enclosed courtyards connected students to nature. (The hallways were also cold in winter and the locked courtyards were hard to maintain through the summer.) 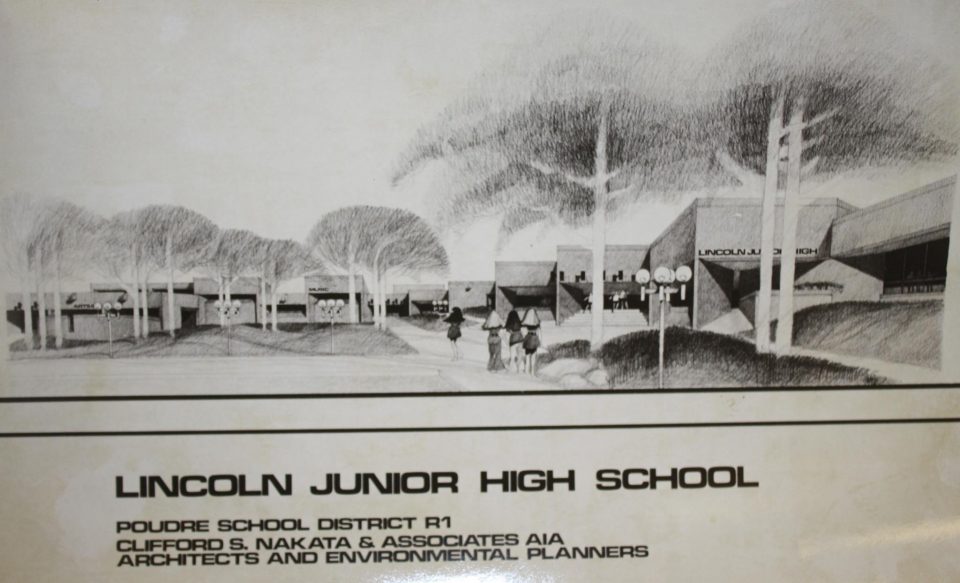 An architect’s rendering of what the new Lincoln Junior High would look like.
(Image from the Fort Collins Archive.)

Each department (math, English, and social studies) had its own “pod” with a central area and staff office surrounded by the classrooms for that department. When the school changed from being a junior high to a middle school in 2009, the teaching staff were rearranged by grade rather than department, creating a 6th grade pod, 7th grade pod and 8th grade pod. This helped to create a tight grade-level community between staff and students. A well equipped kitchen was used for home economics classes and both wood and metal shops were located along the same hall. 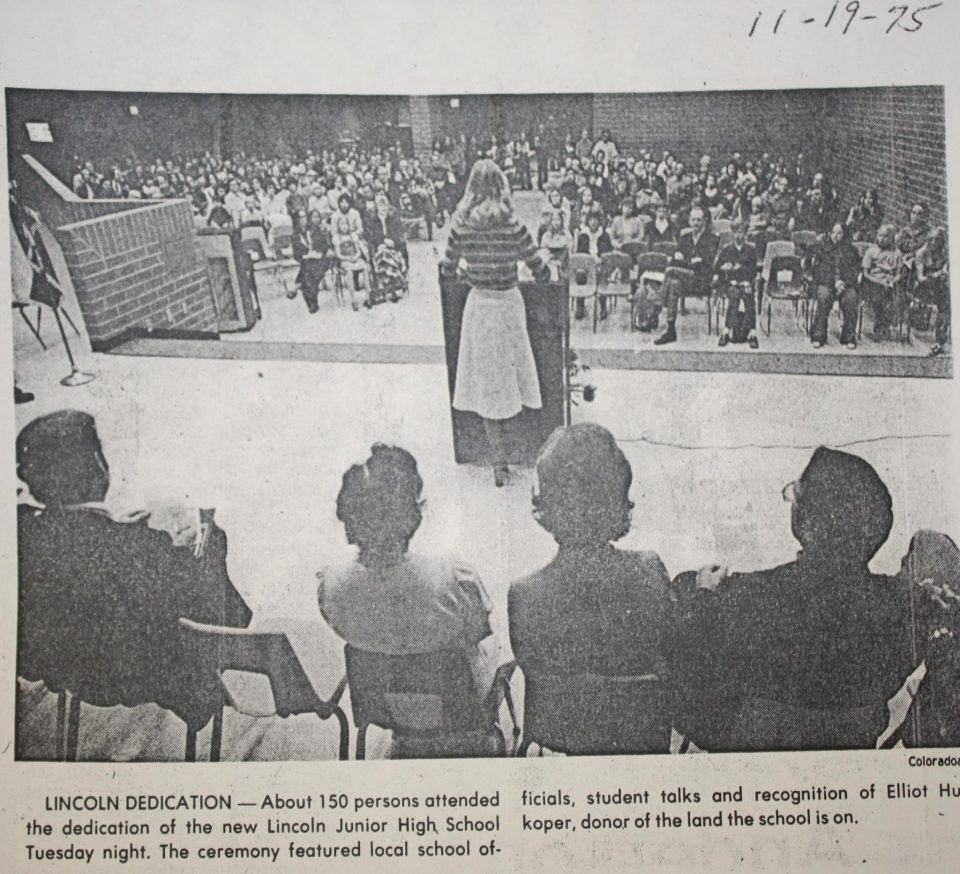 A dedication ceremony was held for the new building in November of 1975.
(Newspaper clipping from the Fort Collins Archive.)

The Colorado Public Schools of Choice Act of 1990 led to changes in schools across the state. Students were no longer required to attend their neighborhood school but could elect to attend any school in the state as long as there was space in the building. This led to programmatic changes throughout the school district as schools for the first time had to market themselves to local families. In the late 1990s, the principals of several schools including Dunn Elementary, Lesher and Lincoln Middle Schools and Poudre High School began to consider the International Baccalaureate program, feeling that it was a good fit for their students. Lincoln Junior High was the first Fort Collins secondary school to embrace the IB model for all students, recognizing that every student can benefit from academic rigor that is tightly interwoven with an emphasis on personal development.

In 2009, the Poudre School District switched from a junior high to a middle school model. The middle grades schools had contained seventh through ninth grades, but the change meant shifting to serve sixth through eighth grades instead. It was at this time that Lincoln Junior High became Lincoln Middle School. 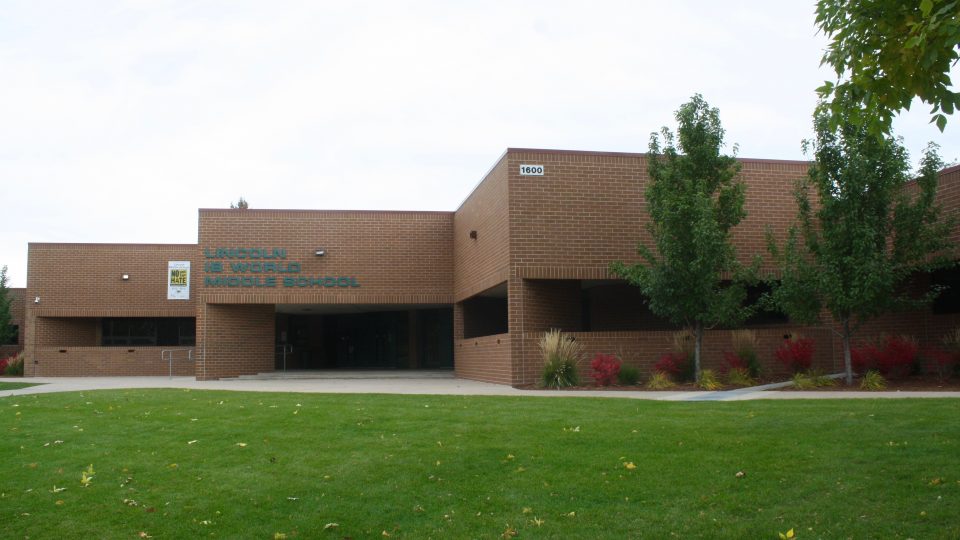 For ninety-five years, Fort Collins Junior High / Lincoln Junior High / Lincoln Middle School has grown and shepherded tens of thousands of Fort Collins’ children through some of the most difficult years of childhood. The school’s top-notch staff has been well beloved through the years with schools throughout the city being named for former Lincoln teachers and administrators. From Lincoln’s halls have come lawyers, doctors, teachers, artists, musicians, city council members, and state legislators.

Lincoln, you have been a blessing to the city of Fort Collins for 95 years. Happy Birthday! 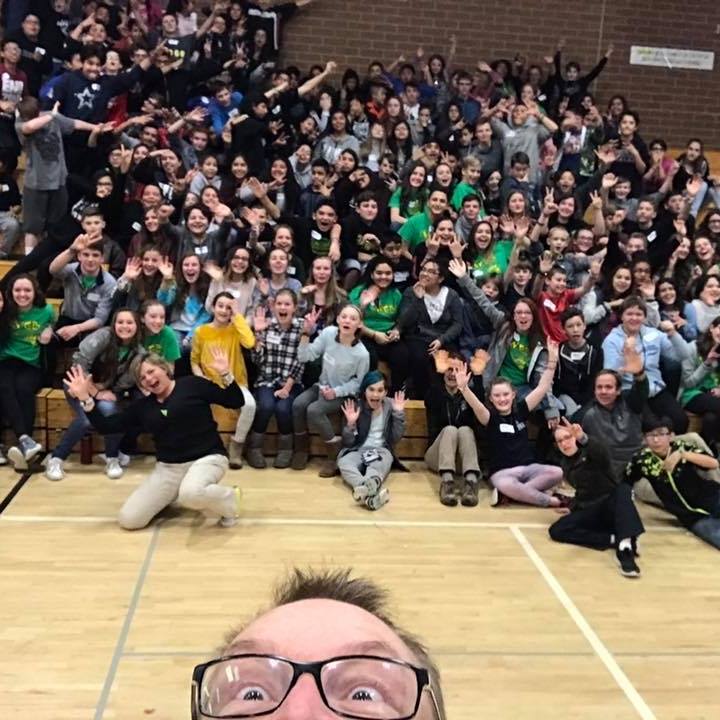 The ubiquitous assembly drone caught this photo at Lincoln
(as found on the school’s Facebook page).