Harkless Hicks – and Hattie and Josie

While researching stories, such as that of Charley Clay, Hattie McDaniel, and the Collamer brothers, I repeatedly kept coming across a neighbor’s name in the census records and city directories that intrigued me — Harkless Hicks. I’ve never met anyone named Harkless before. It struck me as an odd name. But as I said it out loud, it hit me; Harkless was simply “Hercules” said with a deep southern accent. Digging deeper I found that the spelling of Mr. Hicks’ name seemed to change depending on who the census taker was that year. He appears also as Harklis, Harklies, and Arkles. But the city directory and newspaper were pretty consistent in using Harkless. No matter how it was written, I suspect that with a name like Hercules, Mr. Hicks was a large man.

Harkless, like his neighbor Charley Clay, and the McDaniels around the corner, was part of the small Black community that lived on the 200 and 300 blocks of N. Meldrum, and along the 300 blocks of Maple and Cherry.

The story of Harkless Hicks is one without much of a beginning or end. He was born on Christmas day in 1862 in Kentucky, during the middle of the Civil War. And that’s all we know of him until he appears in the Fort Collins Courier on August 25, 1898. 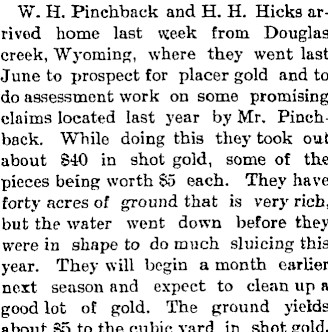 William H. Pinchback may have lived in Fort Collins in 1898, but by the 1900 census, he, along with his wife and five children, were the only Black family living in South Littleton.

It’s possible that Harkless and William Pinchback’s wife, Silva, were brother and sister as they were both from Kentucky and were only two years apart in age. But that is entirely speculation.

According to the 1900 census, Harkless was a day laborer and his wife of 17 years, Hattie, was a laundrywoman. Harkless was unable to read or write, though Hattie could do both, which might explain a couple of mentions of Hattie that appeared in the newspaper.

In January of 1900, Charles F. Brinker sold Hattie two lots on N. Meldrum street, which she immediately signed over to an Alston Ellis. My guess is that Ellis held the mortgage for the two properties. The following year, Mr. Ellis signed 310 and 312 N. Meldrum over to Hattie Hicks as the sole owner. This is kind of boring stuff, but it does show that Hattie and Harkless were hard workers and were able to buy property of their own.

On December 10, 1902, there was a very short mention in the Weekly Courier of Hattie serving a dinner at the Odd Fellows hall. Unfortunately there’s no indication of whether this was a regular event, and no sense is given of who might be expected to attend.

Though I’ve never heard of opossums in the Fort Collins area, they apparently are in Colorado according Denver Wildlife Control.

And then, on the evening of September 5th, 1905, things got really interesting. Apparently Harkless was asleep in bed with his feet towards the window and his arm thrown over his head. As he was snoring away, Hattie sat in a chair next to the window, combing her hair. The window was slightly ajar, and right around 10 o’clock, an unknown assailant stood outside that very window and fired a shot at Harkless. The bullet grazed the bottom sash of the window, glanced off the foot of the iron bed, and ricocheted towards Harkless’ head, tearing a hole through the arm he had resting across his forehead.

Hattie jumped up and ran to find her husband’s revolver. Unfortunately, she wasn’t able to locate it. And by the time she ran out of the house to see who had shot her husband, the assailant was long gone. Though Harkless was at a loss to explain who might want to harm him, Hattie said in no uncertain terms that she knew who was at fault. (Unfortunately the paper doesn’t divulge who Hattie knew the shooter to be.)

As an aside, the writer of the article in the paper adds that if the bullet had followed its natural course (apparently meaning if it hasn’t ricocheted off of the bedstead), it would have passed from the bedroom into the room behind where a boarder, Mrs. George Washington (I am not making this up.) was sound asleep.

Later additions of the paper declare that George Staten was charged with the shooting. One article described him as a Creek Indian. Another said he was Black. Either way, he had been a border with Harkless and Hattie and after an altercation with Harkless, had left in a huff. Apparently he decided to set things straight by attempting to shoot Harkless in his sleep.

After reading about this story in the paper, I went to the house where Harkless and Hattie lived — 310 N. Meldrum. I checked every window that I could, but at some point the original wooden windows were replaced with aluminum, so the place where the bullet grazed the sash appears to have been removed. (The house is slated for demolition and no one lives there any more. So lest you think I was peering into someone’s windows, looking for bullet holes, I wasn’t. I was only gazing into an empty house.)

In the March 7, 1906 Weekly Courier, the announcement came that Hattie had died the week previous, after suffering for several weeks with dropsy. She was 58 years old when she passed. Rev. Monroe, from the First Baptist Church, came to the house and officiated her funeral.

Harkless bought an adjoining piece of land in the summer of 1906. And in 1907, he married again, this time to a real firecracker of a gal named Josie.

Josie shows her spark in 1910 when she has an altercation with Nellie Clay, Charley Clay’s daughter-in-law. I can’t even begin to describe this scenario any better than the newspaper already does.

It’s unclear what kind of relationships Josie built with her neighbors, especially when she felt free to whack someone upside the head when they reached a point of disagreement. But things turned scary in 1911 when some boys came upon Josie while she was working in her garden. They set their dog upon her.

Frightened out of her whits, Josie ran up onto the porch of the house, then dashed inside to find her husband’s shotgun. She then proceeded to chase the boys down the street, waving her empty gun at them. By the time the sheriff came, she was back at her house throwing a fit. The newspaper article is a little unclear, but it appears she was waving the gun at Harkless while he tried to calm her down. Though Josie made it plain that the boys were constantly tormenting her, it appears that no charges were filed either against the boys. 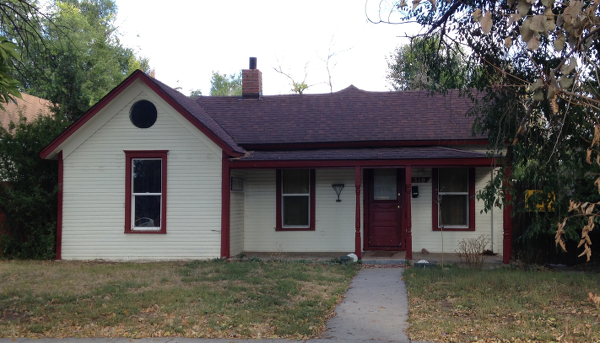 310 N. Meldrum, where Harkless and Josie Hicks lived. (The large circular opening in front was probably added in the 70s.)

The following year, Josie was fined $10 for swearing. Apparently a family had come to N. Meldrum to look at a house and, according to Harkless and a boarder, had called Josie names. The visitors denied this and declared that Josie had fired off a string of choice words against them with no provocation. The court ruled in favor of the visitors and Josie received the fine.

Things seem to have settled down after this because Josie no longer appears in the newspapers. Harkless and Josie appear in the city directories through the 20s. It looks like Josie may have died on May 9, 1922 (according to a Find-a-grave listing of her burial site at Grandview Cemetery) except that she continues to show up in the City directory for another 5 years. By the 1930 census, Harkless has a housekeeper named Martha Lyle and Josie is gone.

Harkless died on December 12, 1932, and is also buried at Grandview Cemetery.

We don’t really know much about Harkless or either of his wives. I could find no pictures. And with the exception of a few mentions in the newspaper, how he lived and spent his days is largely left to our imagination. But he lived in Fort Collins for over 30 years and was known by many influential people of his day.

When we study history, we often spend most of our time on the important people — the movers and the shakers who built grand buildings and made significant changes to our community. Though less grand, we also look back to the pioneers, homesteaders, and farmers who worked hard and helped to create a community, and an economy to support it, right here along the Poudre River. Their contributions might not have been as extravagant, but they were important and foundational as well. But the stories of the poor and the disenfranchised are the ones that most often fall through the cracks of time. And yet they also contributed to creating the Fort Collins that we know today.

Citations that weren’t mentioned specifically above:

All newspapers were accessed through ColoradoHistoricNewspapers.com.