People move to the Old Town area for many different reasons: walkability, caché, the schools. Not too long ago, people moved to Old Town because it was cheaper than many other parts of town. And a large number of people have chosen to live in Old Town because they like the character and feel of living in an older neighborhood.

But that neighborhood character and feel is fragile and can easily be altered. It can be changed slightly — for the good, as when someone repaints their house, or for the bad, as when owners are unable to keep up with repairs on their property. Or it can be changed extraordinarily, as when a hundred year old house is torn down and replaced with a new house that is 2, 3, even 4 times the size of the original.

In many neighborhoods throughout Fort Collins, residents have a promise of stability that is maintained by covenants enforced by a local Home Owners Association (HOA). These associations dictate such things as the style, size, and even paint color of the houses within the boundaries of the HOA. If a house is lost, due to fire or some other reason, the covenants can even dictate what style the new house should be rebuilt in (as the residents of the Parkside neighborhood in Colorado Springs found out after the Waldo Canyon Fire). Old Town, however, has no HOAs. The only protections that have been put in place to maintain a sense of stability for residents, and predictability for developers, are created and enforced by the City itself. 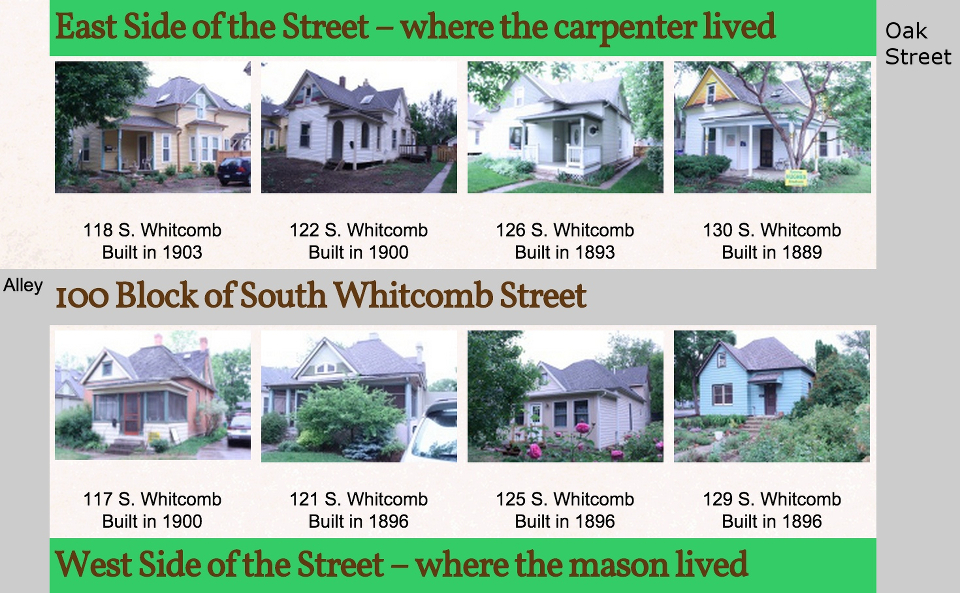 This graphic was used on the North of Prospect (now defunct) website during the midst of the controversy. The house at 122 S. Whitcomb was still standing at the time the post was written on May 28, 2012.

So in the spring of 2012, when residents along the 100 block of S. Whitcomb Street received a notice that a couple was seeking a variance for a new house they were going to build on the street — a new house that would require the tearing down of a 112 year old house that matched 7 others on the street — the neighborhood was immediately alarmed. Many of the residents had lived on the block for decades. One had even lived there her entire life. A change of this magnitude was, by its very nature, disruptive. But the fact that the demolition had been approved and the neighbors hadn’t even been alerted, caused a great deal of consternation. (City code has since changed. Neighbors are now alerted through front yard signage that owners are seeking to demolish a property.)

A meeting was set up by the Landmark Preservation Commission to give the neighbors and the new home owners a chance to dialogue about what was going on. The neighbors requested that no matter how large the new house was, all they truly wanted was for the façade to match the overall style of the surrounding historic homes as much as possible in order to maintain the character and feel of the street face. An architect offered to help draw up the plans. A developer agreed to help as well.

But the new home owners were set on the plans they already had — plans that included a large silo shaped protrusion on the front of the house (which was the cause of the variance they were requesting). The silo reminded one of the owners of farmhouses that she saw while biking along Bingham Hill Road. She wanted to include it in her new house. 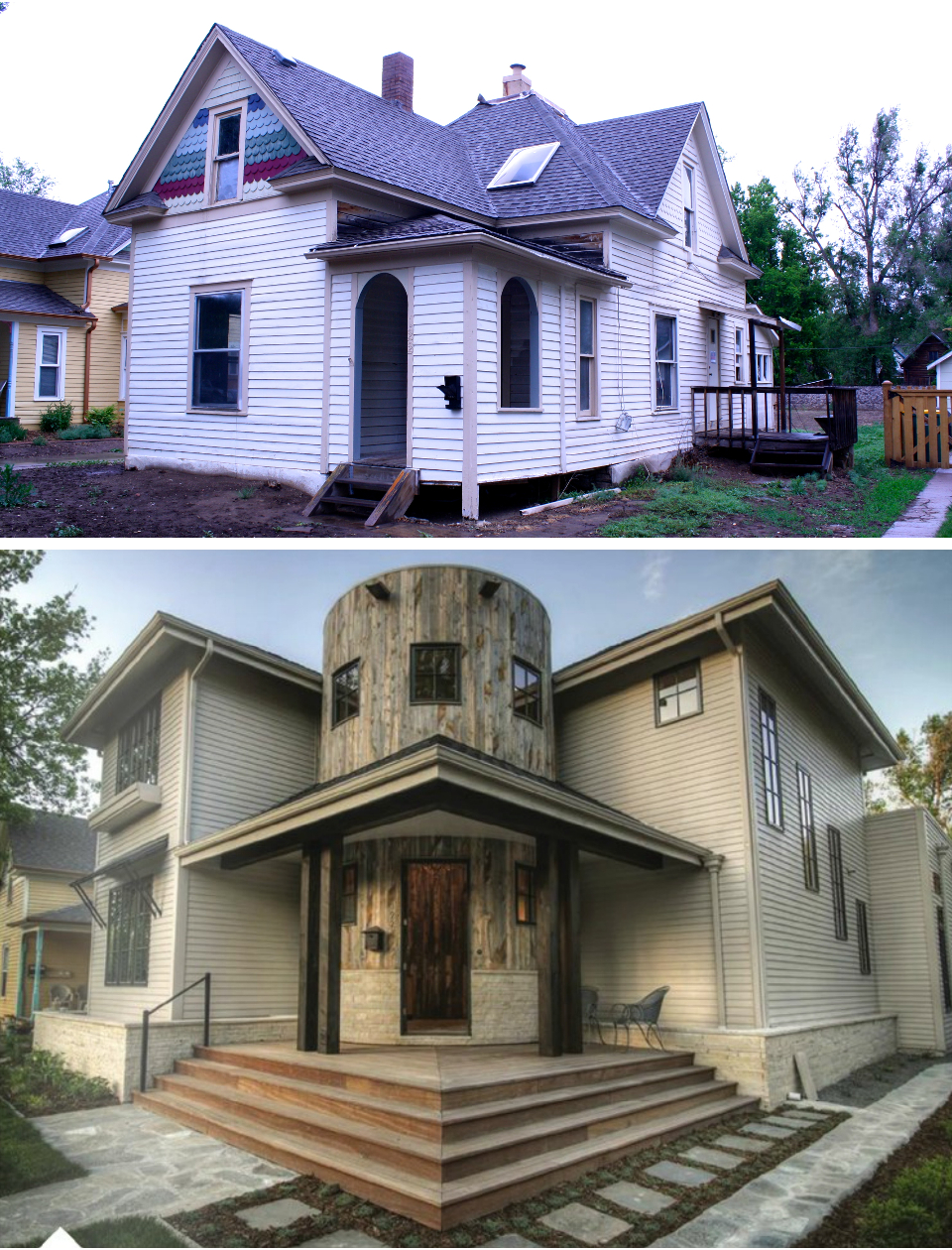 The top photo was taken in May 2012. The bottom photo was featured in the August 2013 edition of Lydia’s Style Magazine.

During all of the turmoil, the neighborhood meetings, and in preparing for the Landmark Preservation Commission meeting, residents began to explore the history of their houses. They were arguing against this intruding house, yet they didn’t know what their basis for argument was other than, “It doesn’t feel right.” So they began doing some research, digging up the names of former residents, as well as the original builders. They included the other neighbors on the block whose houses weren’t part of the matching eight houses, but several of whom, nonetheless, were also concerned about the proposed new structure.

What the neighbors found, as they began to dig, was exciting. The neighborhood had once housed a county commissioner, a deputy assessor, and a judge, among other well known personages. A carpenter had built one of the houses at one corner and a mason had built a house on the opposite corner. In time, the carpenter built three more houses in a row, living in the one he had just built while working on the one next door. The mason did the same. Through this process, houses of increasing size and decoration were constructed, yet each bore an overarching resemblance to the last. 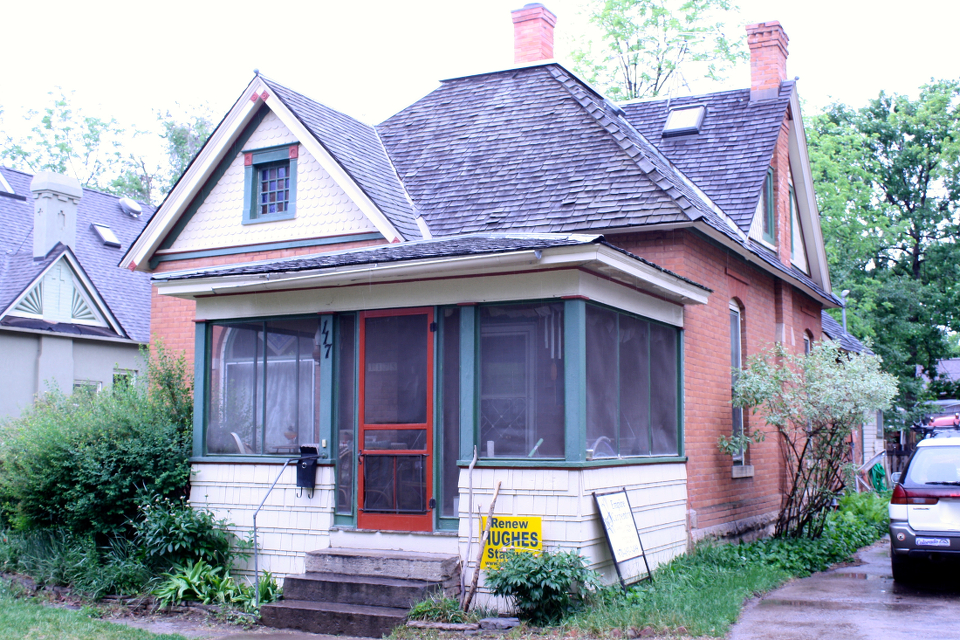 The fourth of four houses built by a brick mason along S. Whitcomb.

The neighborhood decided to seek landmark designation for a small historic district. They hoped that the designation would protect the block from the loss of a 112 year old house and the insertion of a new house with a significantly different look and feel than the rest of the street. But even if they failed in that regard, what they had learned while researching their own houses convinced them that historic designation would be worthwhile.

While they were preparing the nomination documents, the historic house at 122 S. Whitcomb was demolished. Ironically, during the demolition the bulldozer had a bit of a mishap. It was almost as if the old house got in one last laugh before being hauled away. 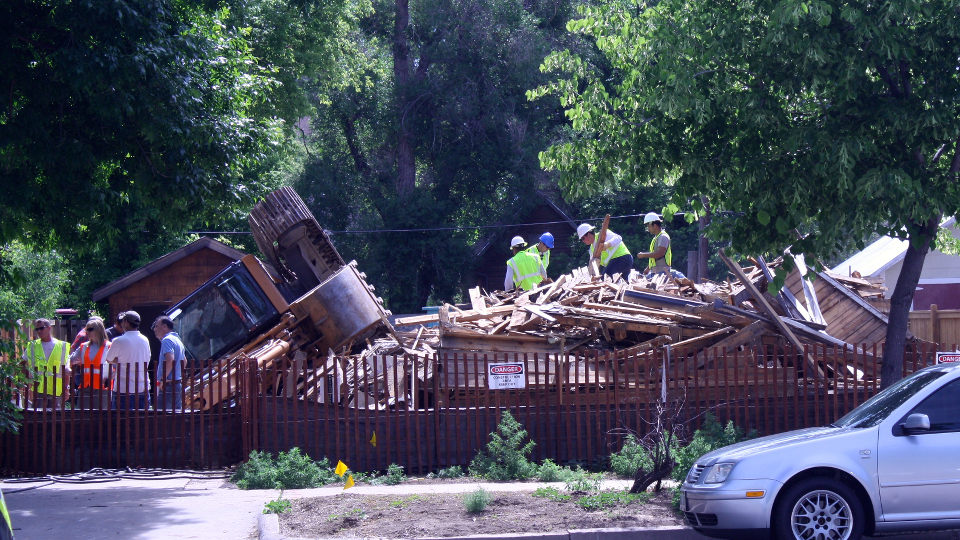 The nomination documents were ready by the fall of 2012 and were reviewed by the Landmark Preservation Commission (LPC). Essentially, the role of the LPC in the process is to vet the documentation and verify that the “historic” structures are indeed historic. In order to be given landmark status, the properties had to meet at least one out of four standards of significance.

The district was found to meet not just one, but three out of the four standards. The LPC moved to approve the nomination. The next step was to gain the approval of the city council.

On December 18, 2012, Fort Collin’s newest historic district was created by the city council. The district contains fourteen properties, one of which is the new silo house at 122 S. Whitcomb. (It is a “non-contributing” building.) Since becoming a historic district, one of the home owners has taken the opportunity to renovate their house, restoring some of the historic detailing that had been lost over the decades. 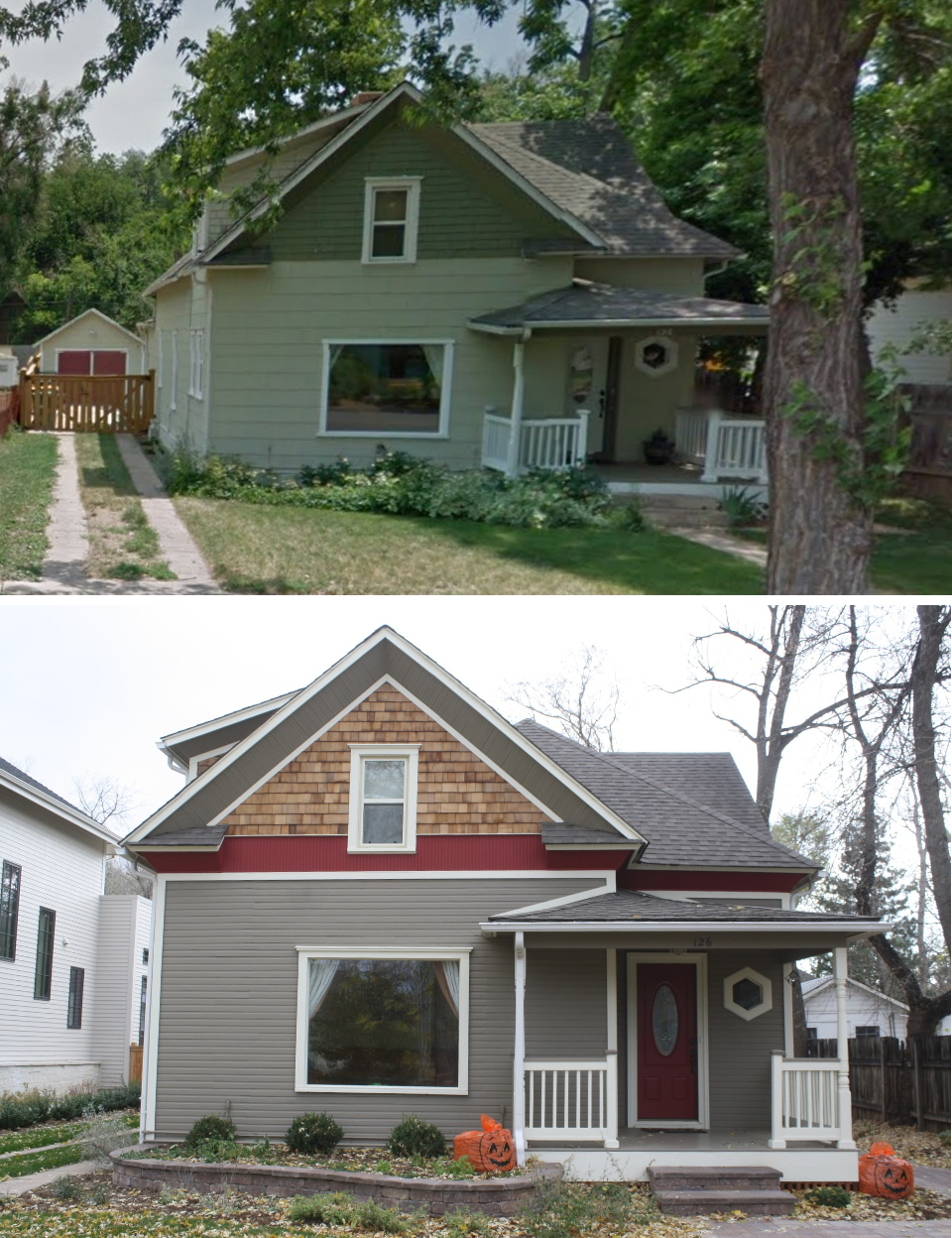 126 S. Whitcomb – before and after renovation.

Though the district has been altered, not only by the addition of the silo house, but also by another new house on the northeast corner of the block, the remaining historic buildings are now protected as local landmarks within the district.

In the end, the residents found that it was only by landmarking their properties that they were able to maintain some control on the character and feel of the neighborhood in which many of them had lived for several decades. They, like the Sheely Neighborhood residents before them, used landmarking as a tool to create stability along their street. (The sizable financial benefits were just an added bonus.)

The city will not preemptively declare a property to be historic. There are two ways in which a determination can be made. Either a home owner can request a Historic Review, which is generally only done if the owner is considering adding an addition or razing the property (or if the home owner wants to sell the property and believes that advertising it as a development opportunity will increase the likelihood of a sale). Or the homeowner can request historic designation. But it is always up to the home owner to initiate the process. The City does, on occasion, conduct surveys of properties in order to assess the historic and cultural capital and to document, for archival purposes, the history and architecture of the city. But it is always up to the landowner to start any historic designation process.

To find out more about historic preservation in Fort Collins, check out the Historic Preservation page on the City’s website. From there you can access all sorts of helpful information. But two particular pages you might be interested in include the Historic Review page and the Designations page which explains the local, state, and national programs.

It was the creation of this historic district, and the ordeal that the neighbors went through to try to preserve the character and feel of their street, that first got me involved in historic preservation. I wrote much of this story from my own knowledge of the events that took place, though I did check dates (primarily by using information tagged in photos of the neighborhood that I had taken, but also through the nomination form and city council records).

Information on some of the important early residents came from the Whitcomb District nomination form. Nomination forms of this sort are often online. But the creation of this district is so recent, that it doesn’t appear to have been added to the internet yet. I had a copy of the form that was sent to me a few years ago by Kevin Murray, the local resident who prepared the form.

Although I have taken my own photos of the silo house, the one from Style magazine matched the angle so well of the photo I had of the original house that I decided to use their photo instead of my own. You can see the magazine’s photo, as well as the accompanying article, in the August 2012 edition of Lydia’s Style Magazine.

Although I had taken a “before” photo of 126 S. Whitcomb, it was rather blurry. So I used the Google Streetview version in the “before and after” comparison. All other photos are my own, including the street layout at the top from North of Prospect (now defunct), which is my own blog, and which I’ve let lie since taking on Forgotten Fort Collins.

The top image of the blackened house was taken before demolition. Apparently the black paint helps to keep asbestos from going airborne. Whether or not that is true is unknown to me. I saw the demolition and didn’t see anyone monitoring for airborne asbestos. The black seemed appropriate however, as the house, and the neighborhood, were in mourning at the loss.

The following two images are for those interested in getting an aerial view of the difference between the older house at 122 S. Whitcomb and the newer one. The older image is from Google Maps and the newer from Google Earth. Unfortunately they were taken at different angles and in different lighting, but the difference in the overall shape and style of the new building from the old is still readily apparent. 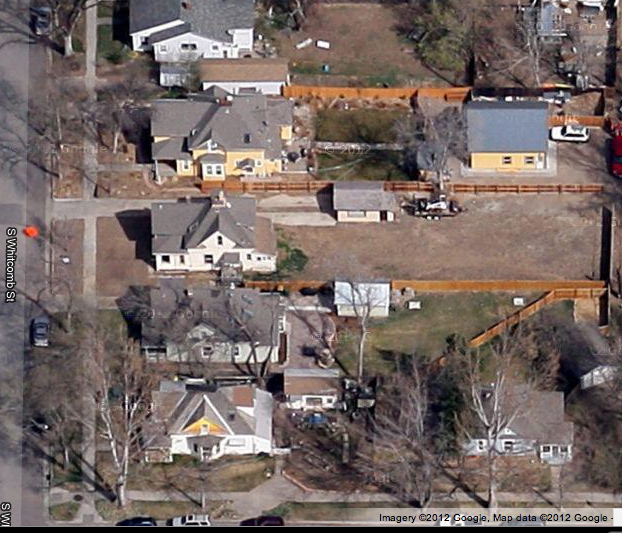 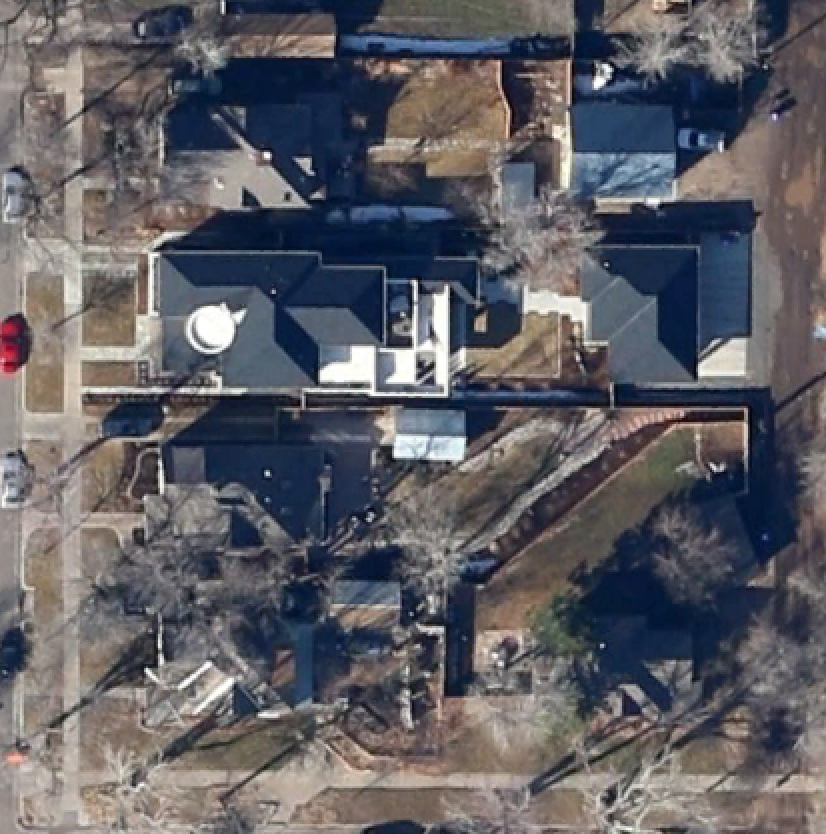 2014 Google Earth view of the southeast side of the 100 block of S. Whitcomb.