As you sit and enjoy a meal in the Rodizio Grill in Fort Collins, you note that you are in a remodeled train station. There is a great history of this building and the trains that transported passengers to various destinations from this building for almost 50 years.

These two UP buildings are sometimes confused with the railroad competitor Colorado and Southern buildings which were located in the 100 block of Laporte Avenue west of College. The Colorado and Southern passenger depot was demolished in about 1959. This building was almost certainly designed by famed architect Gilbert Stanley Underwood, who designed many depots across the UP system, Greeley’s among them. 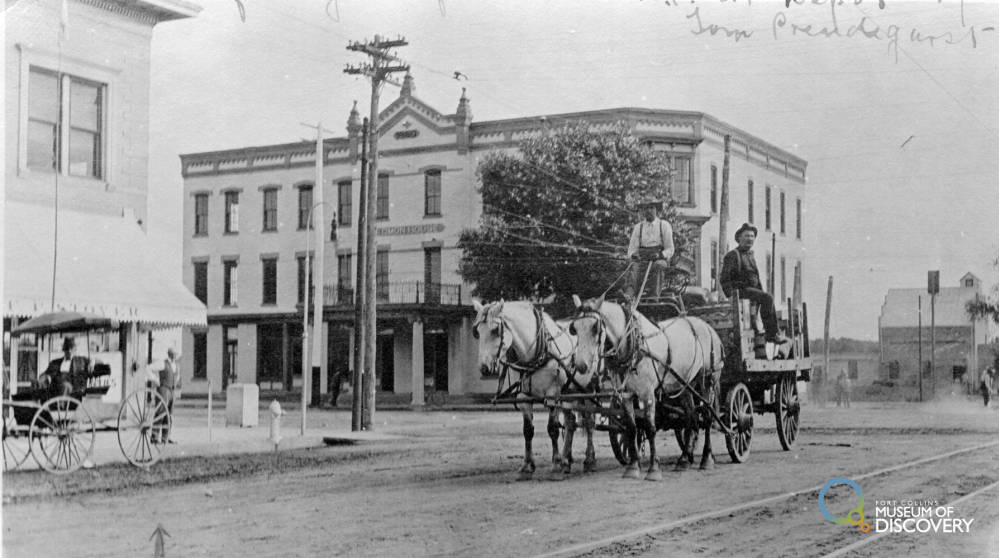 First load of freight transported from the Union Pacific on Linden Street, July of 1911. My great-grandfather, Edwin L. Burrill, is riding on the wagon and Tom Pendergast is driving the team. The Tedmon House is seen behind them. (Fort Collins Museum of Discovery, H00767.) 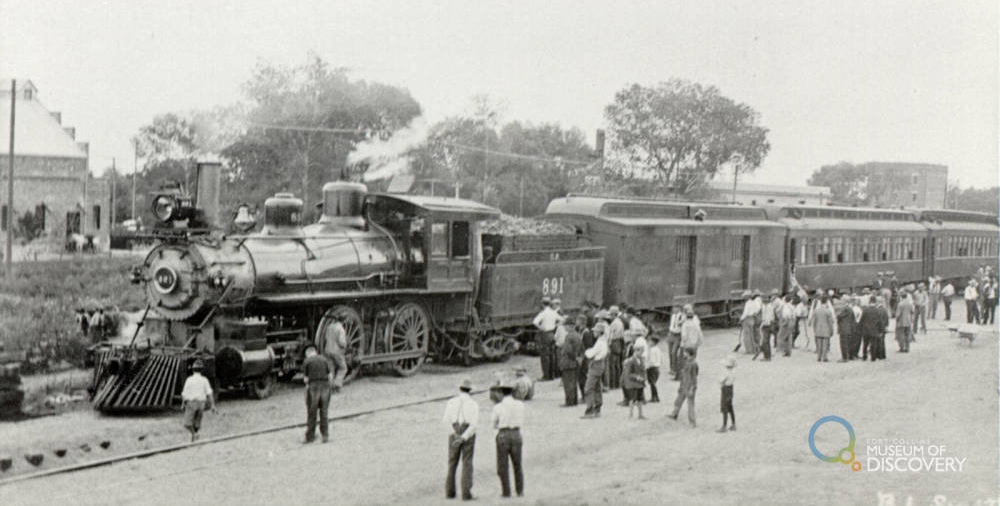 Arrival of the first through passenger train between Denver and Fort Collins, July 15, 1911. At this time, the Tedmon House was used a passenger depot. (Fort Collins Museum of Discovery, H01913.) 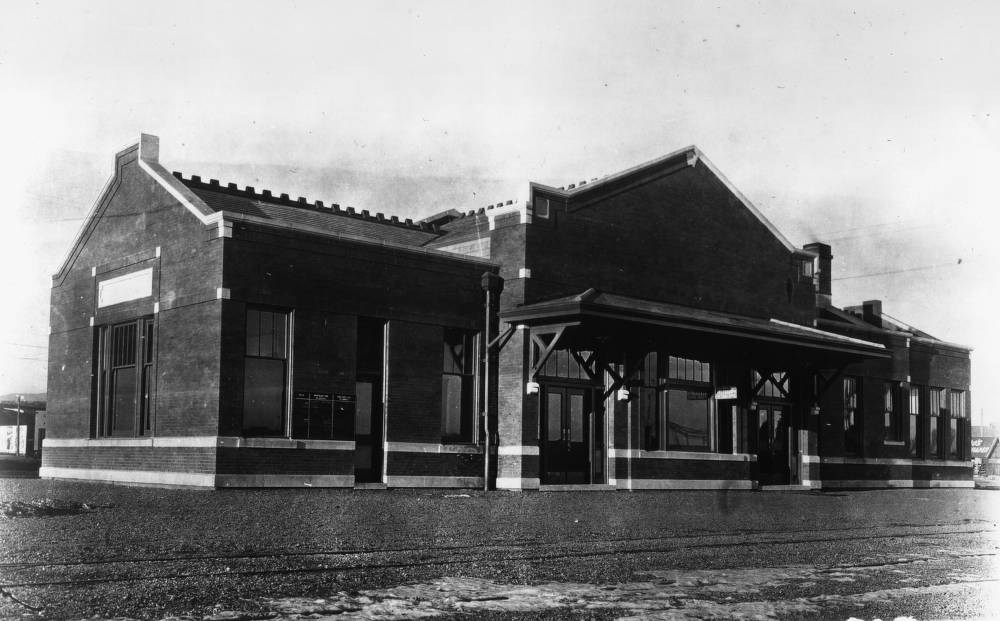 My connection to this building is my family’s employment by Union Pacific which goes back to 1927. When my dad, E.A. Burrill, was first hired on to UP, he told of stoking coal into the furnace in the basement of this building. Over the years, various family members employed by Union Pacific would not only pass through this building as part of their job but they would depart on trains for various points that UP served. 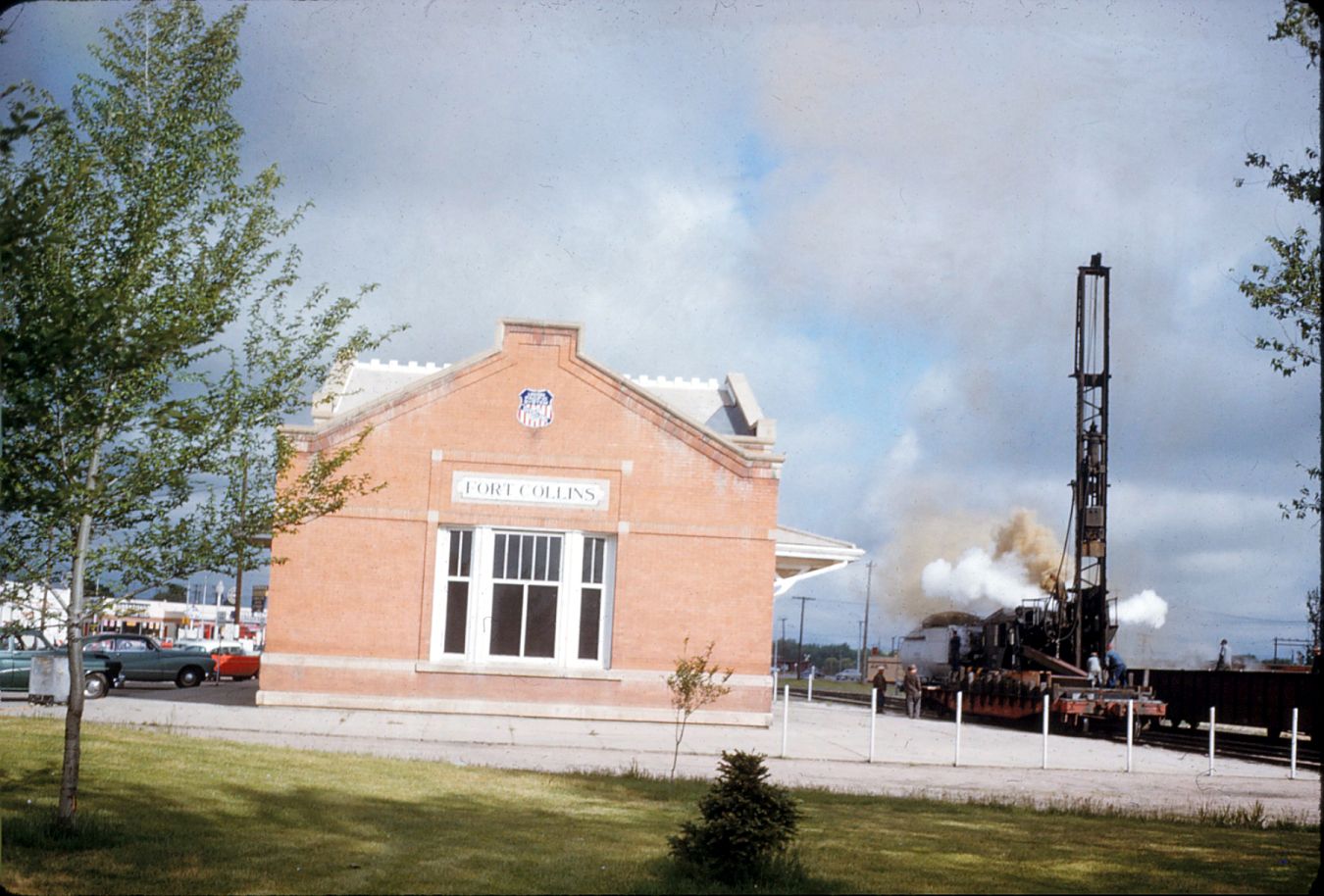 Over the years, the depot was served by both trains and bus service, usually to Greeley or LaSalle to connect with UP Passenger trains to points elsewhere. I don’t know when passenger train service was discontinued to Fort Collins, it was sometime in the mid 1950’s but passengers could board bus connections 4 or 5 times a day to either Greeley or LaSalle. 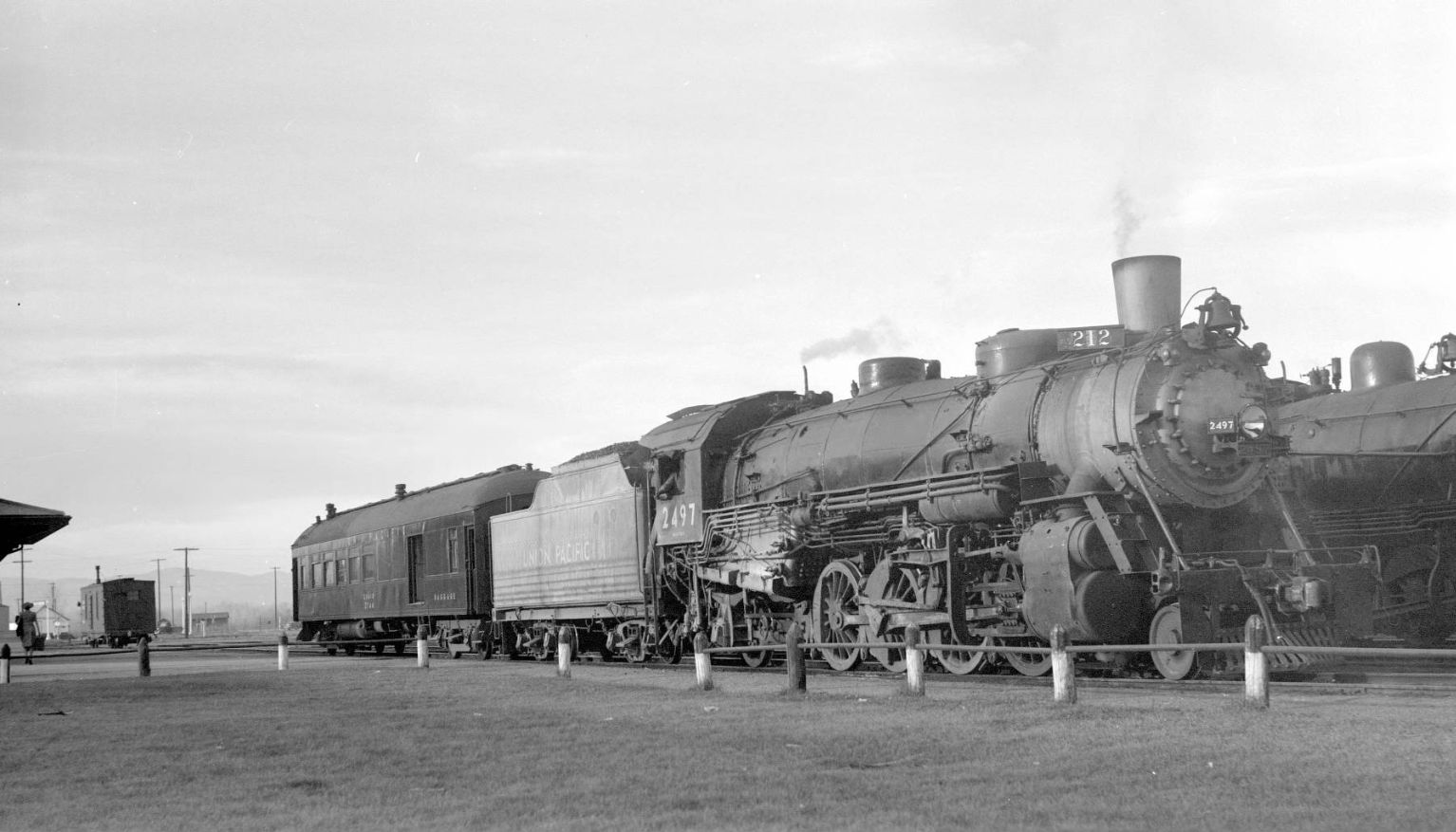 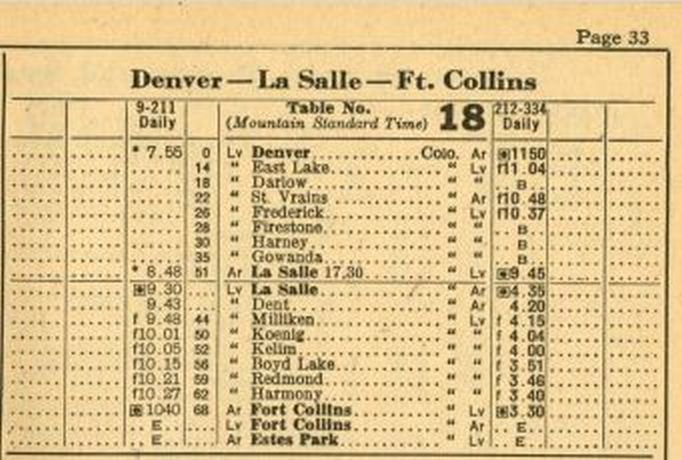 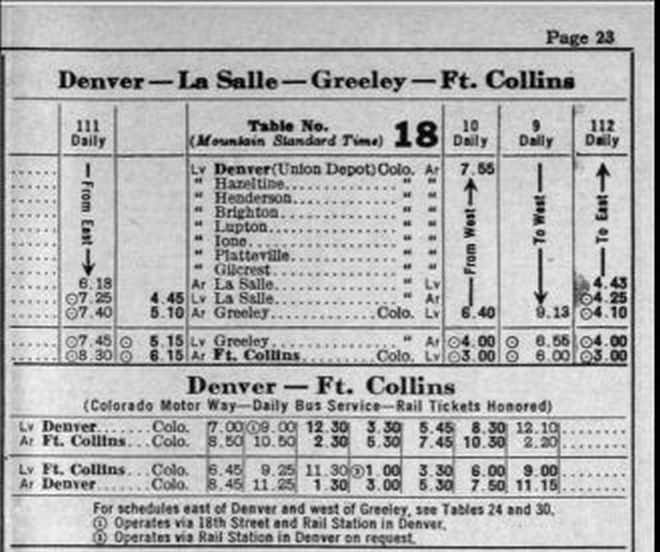 By 1961, bus service has replaced the train to LaSalle but there were six bus arrivals and departures daily from the Jefferson Street Station.

I believe that the bus service lasted until about 1965 when UP closed the Jefferson Street Station and consolidated both passenger and freight employees in the freight house at 350 Linden Street. I believe that the last passenger agent was Luther B. Whitehead, a very good friend of my family. You could still go to the freight house and buy a ticket to ride a UP passenger train until April of 1971 when Amtrak took over the service but in the late 1960’s passengers had to make their own arrangements to get to Greeley or LaSalle. Union Pacific soon sold the Jefferson Street Station to Bob Everett, who operated a paint store in the building. The Everett family retained ownership of the building for some time. Other businesses which occupied the building included Pioneer (later Mountain States) Electronics which sold electronic components and supplies. 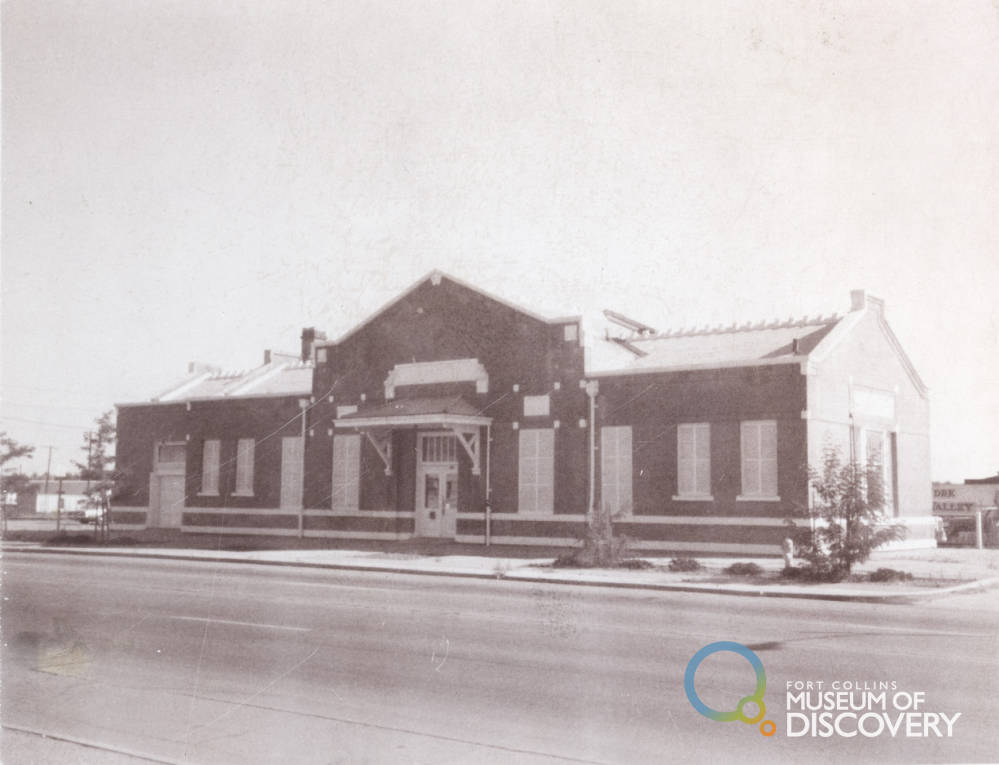 By 1975, shutters where added to the windows of the building. (Fort Collins Museum of Discovery,
200Jef78)

Sometime in the mid 1980’s the building changed hands again and the idea of a restaurant came to be a reality. I believe the first restaurant was established in about 1986 and was indeed called the Jefferson Street Station. The business changed hands on several occasions and in the 1990’s a Cheyenne based restaurant chain called “Sanford’s Grub and Pub” was housed in the building. In about 2015, the current owner of Rodizio Grille took over. I believe the building is owned by a group of investors now. The building is beautifully cared for by the current owners and occupants. The word is that the Rodizio Grille is among the finest restaurants in Fort Collins at this time. Trains still pass on the rear side of the building behind a fence on a regular basis. The Union Pacific is still very much a part of the Fort Collins scene. 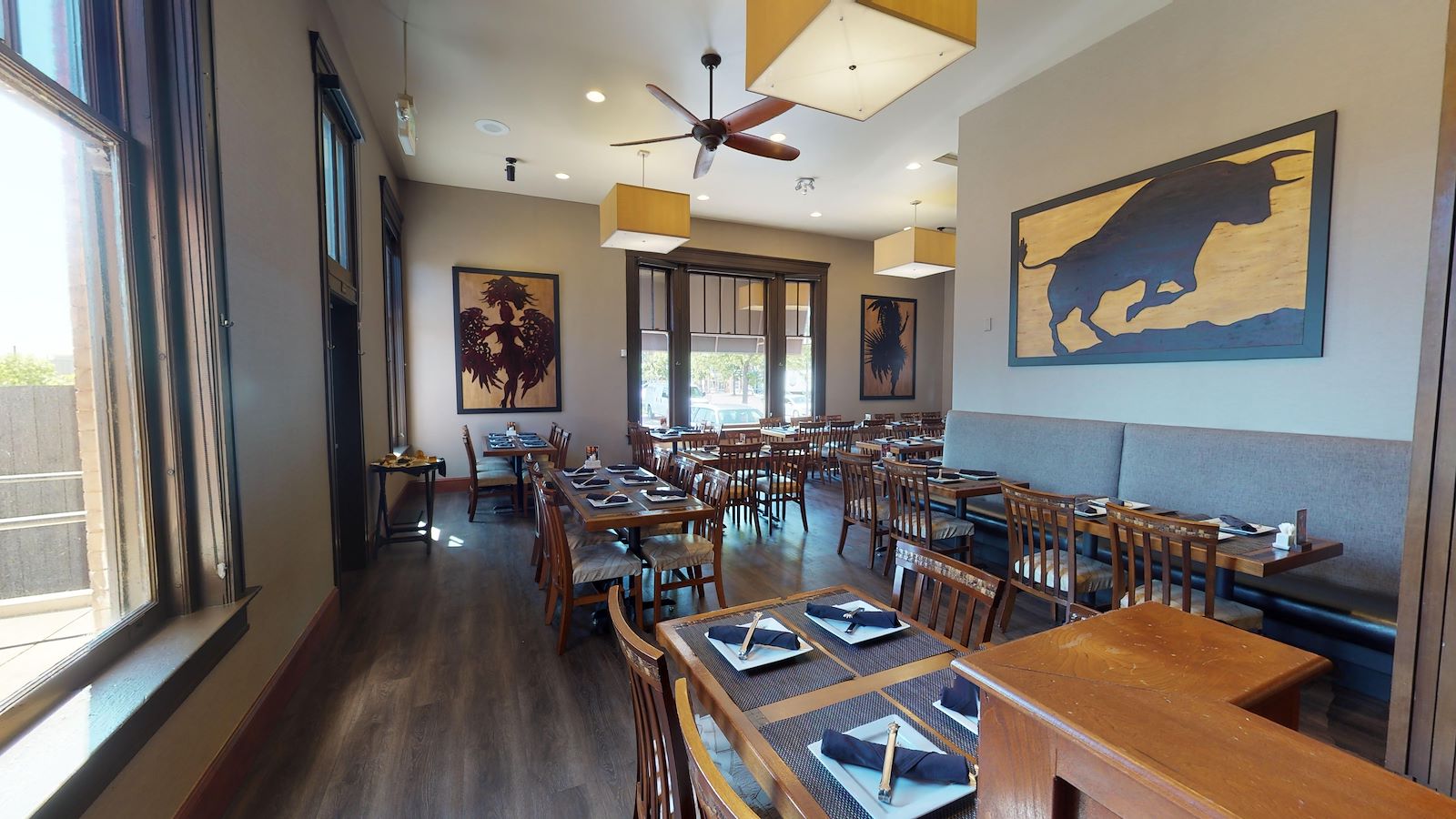 The exterior of the front side of the building as seen in 2018 with “Union Pacific” sign still displayed. (Photo from Tripadvisor.)

Author Bio: Jim Burrill, a 4th generation native of Ft. Collins, is a fan of historical buildings and old trains. Semi-retired from Hewlett-Packard, he spends his time at his family property in Ft. Collins and his hideaway in  the Black Hills of South Dakota. He can be contacted at 844jim(at)gmail.com.