Holy Family Catholic Church – A Parish for the People 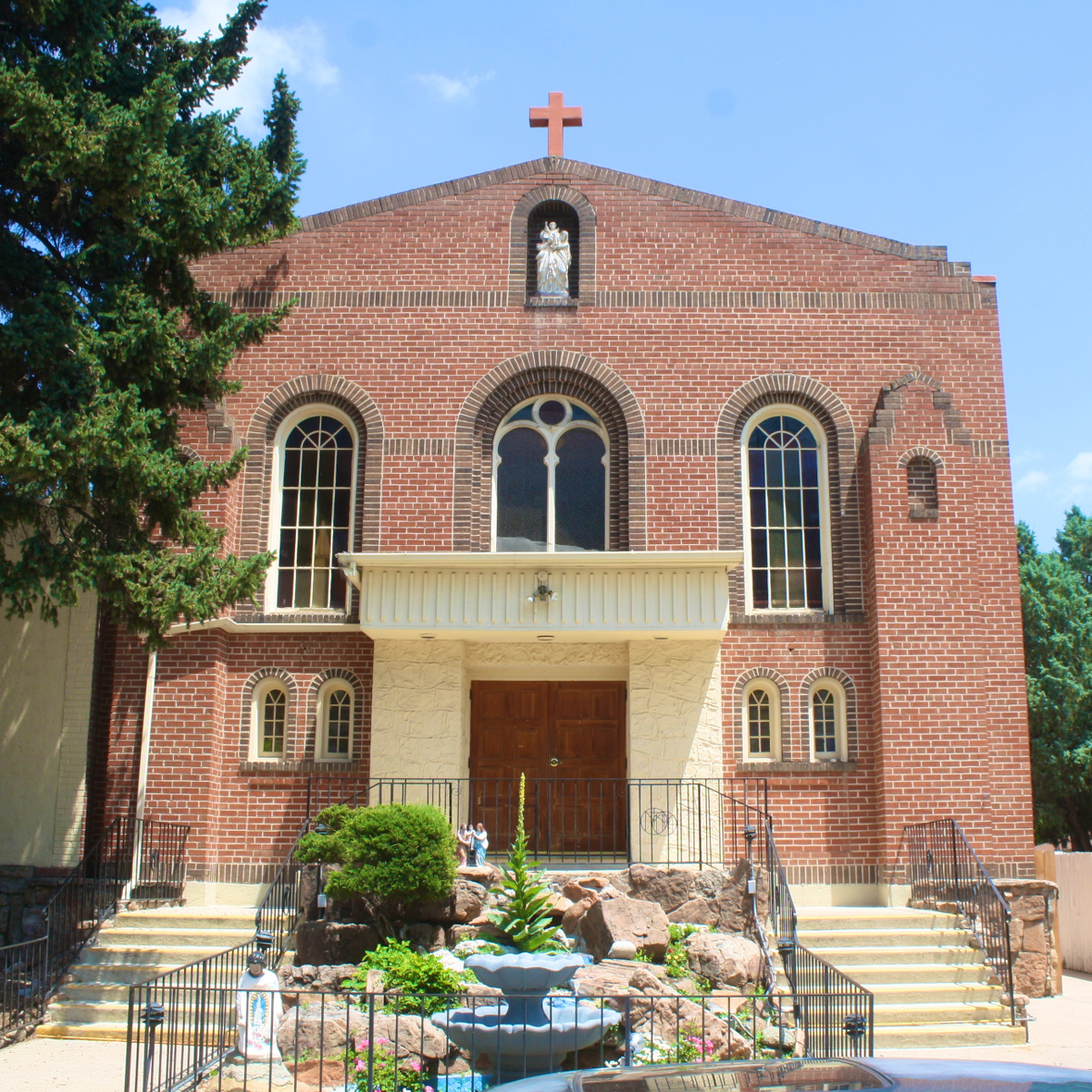 Holy Family Catholic Church at the corner of Whitcomb and Cherry in Fort Collins, Colorado.

In the early 1900s, the sugar beet industry took root in northern Colorado. The farmers employed migrant workers to harvest the fields. In the beginning, these workers migrated from farm to farm, starting in Texas and working their way north, first to thin the beets, then to harvest them. It was soon discovered that skilled laborers provided a better beet in the end (with a higher sugar content). Sugar mills helped farmers to find and train laborers. They discovered that immigrants from Europe were often already familiar with beet harvesting. Germans (who had been living in Russia) were a plentiful source of experienced workers and formed the basis of the early beet labor force. The Buckingham and Andersonville neighborhoods were located on the Sugar Factory property and enabled workers to bring their families to Fort Collins and settle down. (Buckingham stands just north of Lincoln Ave. near where Woodward Governor is currently building their new complex. And the Andersonville neighborhood is just to the east of Lemay and south of the train tracks near Vine.)

Mexicans took on jobs at the Ingleside quarry, providing limestone that was needed in the sugar making process. By 1910, they began to seek work on the beet farms and in the sugar factory as well, and they settled into the Alta Vista neighborhood, which they called “la Colonia Española.” Immigration from Europe came to a standstill with the start of the Great War and Mexicans filled the gap that was left by the Volga Germans. Eventually all three sugar beet neighborhoods, came to be known as “tres colonias.” The history of these neighborhoods and the Hispanic families that lived in them during the time of the beet factory are remembered through the Museo del las Tres Colonias which resides in Andersonville.

Located on the other side of the Poudre from the city of Fort Collins, the immigrants were set apart from the residents of the town physically, which kept integration between the migrant workers and city residents to a minimum. (This barrier was somewhat breached in 1904 when a flood led to many Fort Collins residents aiding the German-Russians with food and clothing. There doesn’t appear to be a similar barrier-breaching episode during the time that the colonies were comprised primarily of Hispanics. If anything, prohibition inside the city limits and distilleries in the neighborhoods outside the city led to even greater separations between the two people groups.)

This Second Presbyterian Church building was located on the northwest corner of Whitcomb and Cherry and became the first home of the Holy Family congregation.

Myron Akin, a former mayor of Fort Collins, writes about a missionary chapel in “The Jungles” (which is what the Buckingham neighborhood was frequently called) in his 1909 journal. A Presbyterian himself, it’s likely that this chapel that Akin mentions was, if not Presbyterian, at least Protestant in nature. Catholics had to cross the river to attend Mass at Saint Joseph’s Church (at the corner of Howes and Mountain Avenue). Although all Masses at that time were given in Latin, the Homily was still preached in the vernacular, which at Saint Joseph’s meant English. The Spanish speaking congregants were able to attend Mass, but it was much harder for them to participate, both because of the language barrier, and because of a strong cultural barrier (which is a nice way of saying that the folks of European origin were pretty darn racist against the immigrant Mexican population. An article from the Fort Collins Weekly Courier in September of 1901 gives a shocking description of the supposed character of the average Mexican immigrant. But I’ll save that for a future post on racism in the city.)

Father George Joseph LaJeunese at St. Joseph’s Church sent a request in 1924 to the bishop asking for a priest who could serve the Spanish-speaking population in the area. Father Joseph P. Trudel, a French-Canadian and Spanish speaker, was appointed and served as the first priest for the fledgling new congregation that would come to be known as the Holy Family Church. They first met in the old Second Presbyterian Church building that had been vacated only a couple years previous when that congregation moved to a new building at the corner of Grant and Maple. A new church building was raised in 1929 at the cost of $12,000 on the southeast corner of Whitcomb and Cherry, kitty-corner from where the Hispanic congregation had been meeting. Lee Martinez (for whom the park just down the street was named) was a strong supporter of the church and assisted with construction by hauling steel beams from the railroad depot to the construction site by horse and wagon. (It’s interesting to note that the St. Joseph’s church building also cost $12,000. But that was in 1900 dollars. When adjusting for inflation, at least twice or three times as much money was spent on St. Joe’s as was spent on Holy Family.) 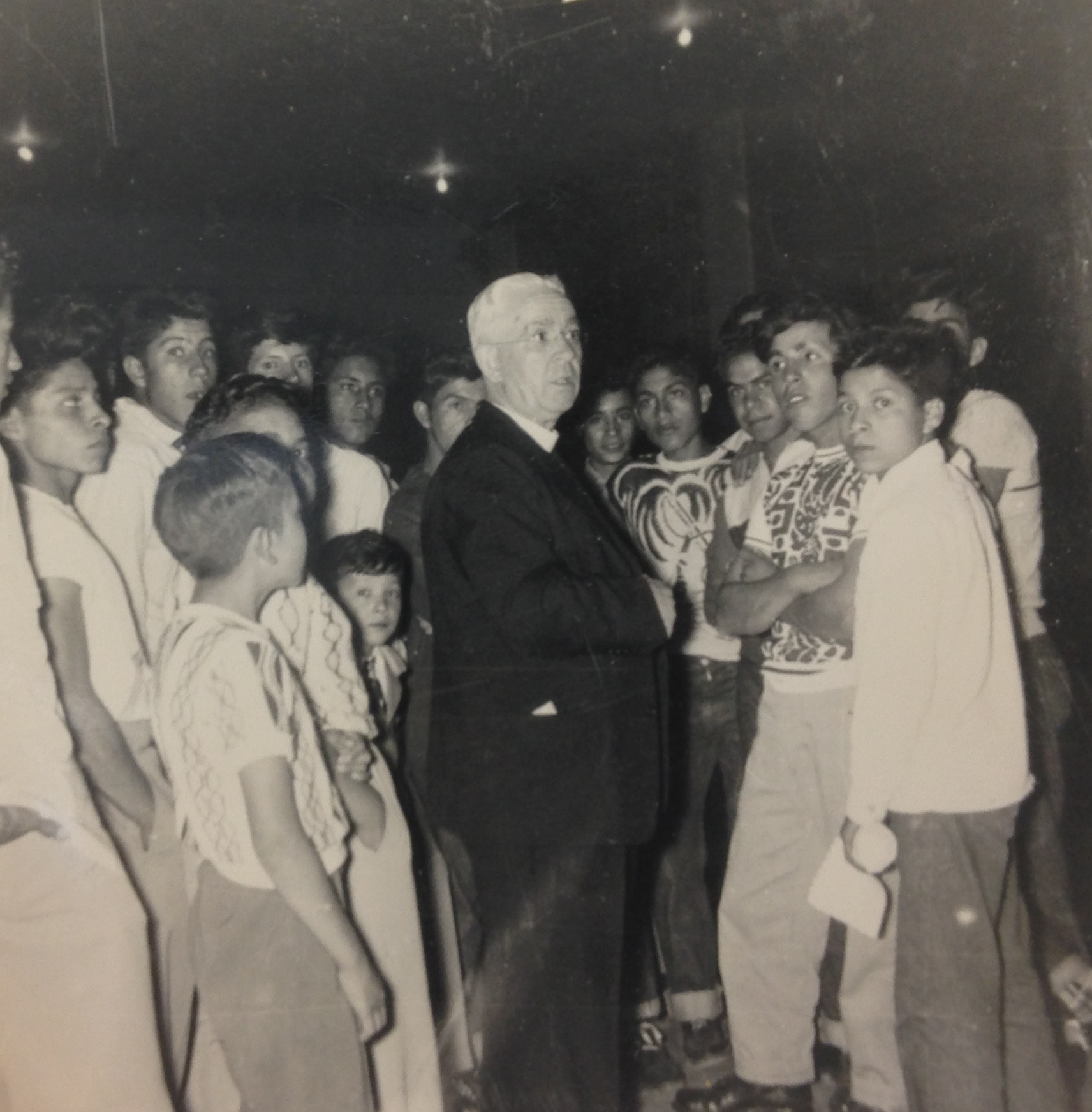 Father John R . Fullana and youth from the church.

In 1936, Father Trudel stepped down as priest due to failing health. Father John Fullana, of the Theatine Fathers, took his place, and it was under him that the church really came of age. Father Fullana had a heart for people, all people, and he worked tirelessly not only for the direct benefit of his parishioners, but also for the benefit of all Fort Collins residents. During his tenure the recreation center was built which included a gymnasium, auditorium, library, meeting rooms, classrooms, and a kitchen. In 1975, the school district built a new school on Laporte Avenue and allowed the Hispanic community to name the building. (This is another interesting story that begins with racism and ends with appeasement and which I’ll share in a future post.) The community was pleased to name the building after Father John Fullana. 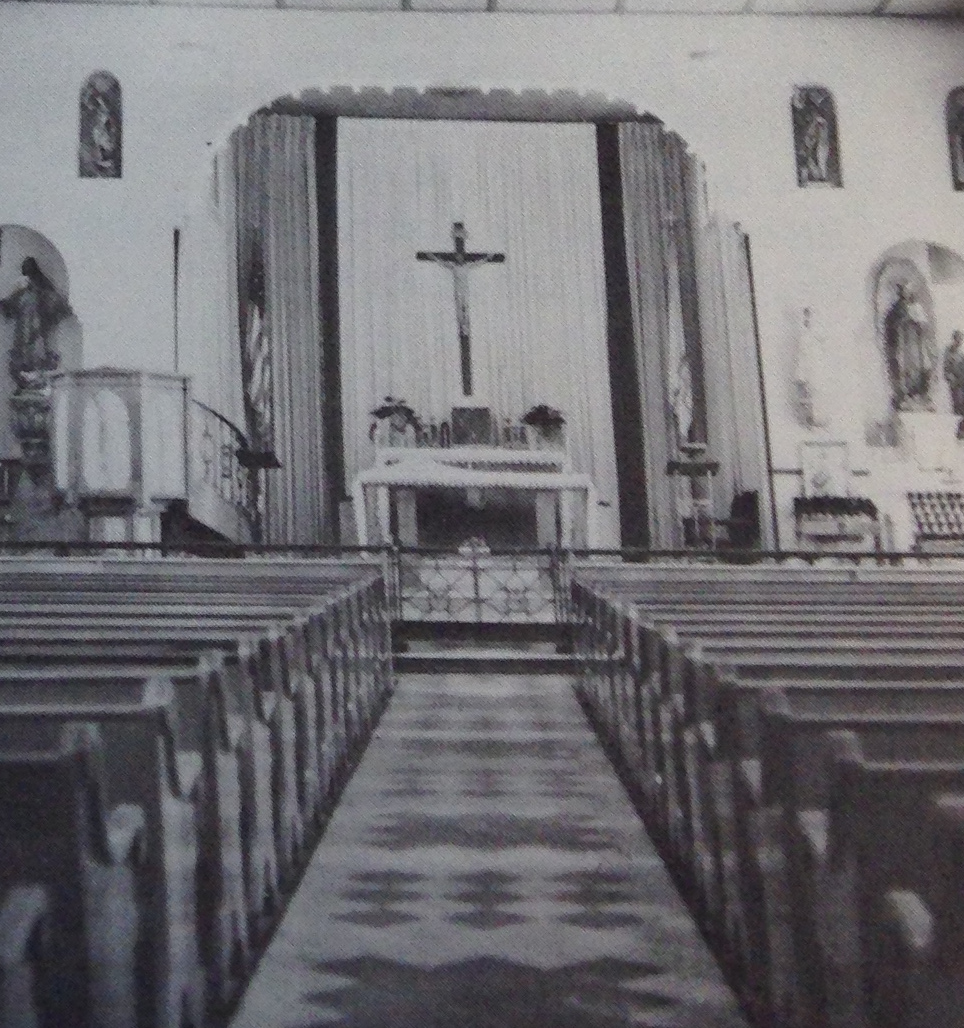 The inside of the church before the fire in 1969.

On March 7, 1969, Father Bartholomew Quetglass, the parish priest at the time, was visiting a sick congregant in the hospital. He returned to find the interior of the church ablaze with a fire that had apparently started from one of the candles. The interior of the building was essentially gutted with only a few items that remained salvageable. (The badly charred crucifix was coated with plastic resin and returned to the church after renovations were completed. It stands as a reminder that God will see the congregation through even the hardest of times.) The church was devastated by the tragedy, yet they also saw God’s goodness through their sorrow as the congregation stepped forward and helped generously with renovations that left a newly refurbished church building. 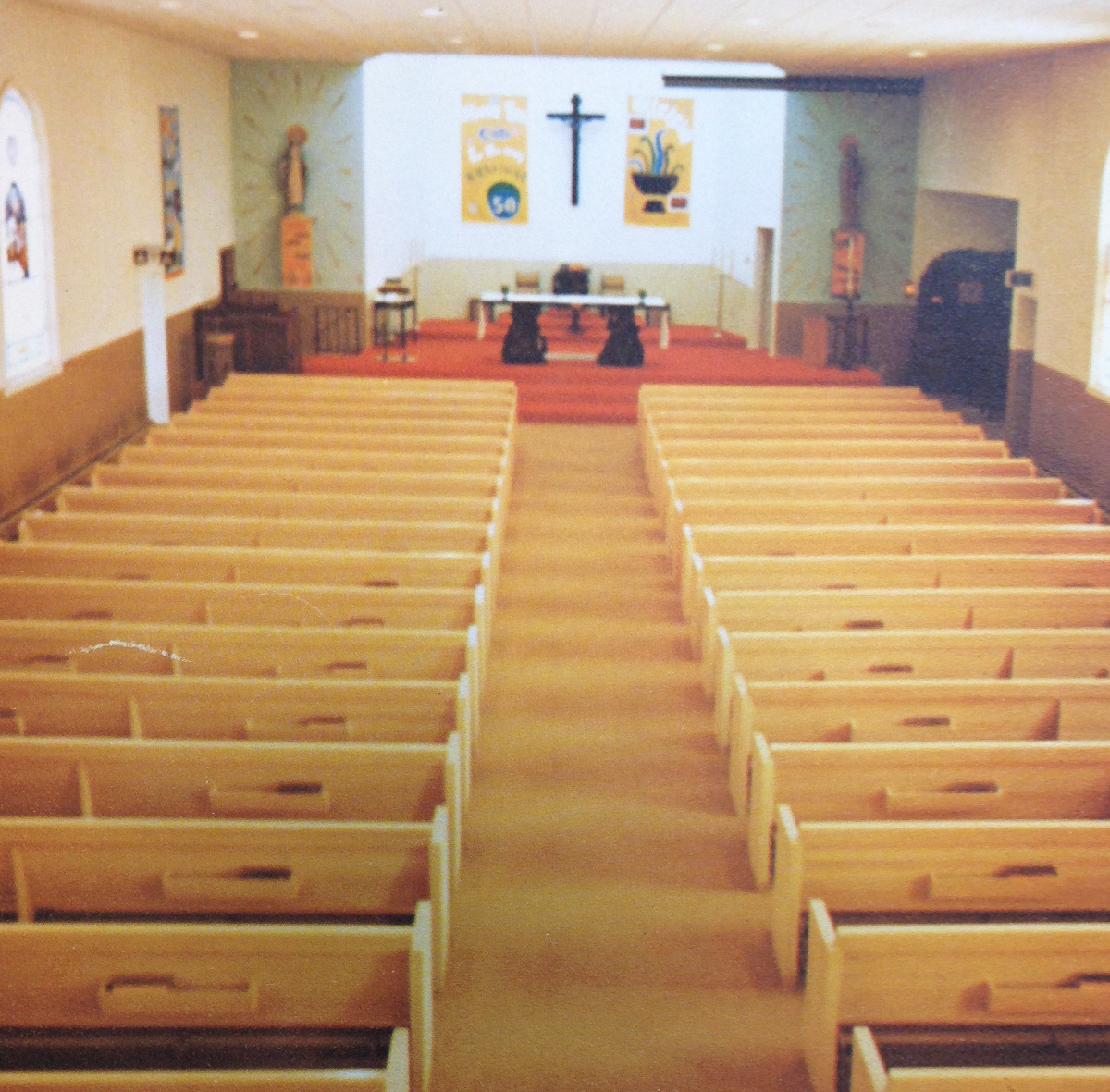 The interior of the church after the fire.

From the time people started coming up from Mexico, looking for work or to escape from the Mexican Revolution, until 1924, this community was looked upon as foreigners — a potential mission field, but also a pestilence. There was little to no effort on the part of long time residents to help the Hispanic community assimilate or integrate into the wider Fort Collins community. The request by the congregation of St. Joseph’s church to peel off the Spanish speaking parishioners and assemble them in a smaller satellite building with their own priest, was an act of repelling that which was unlike them. In other words, not only were the people of Fort Collins not inviting the Hispanics to join the community, but they weren’t even neutral on the topic. They actively took steps to force a continued separation between the dominant and immigrant cultures.

This racism didn’t end in 1924, but with the creation of the Holy Family Church, the Hispanic people finally had a place that they could call their own. The church was the center of their community. Father Fullana, with quiet love and determination, began to speak out on behalf of his people for a better way. He advocated for his parishioners, who he called “nuestra gente,” or our people.

The church has gone through many ups and downs over the years. There have been several priests who have come and shepherded the people of this congregation, each bringing their own unique strengths and abilities to build up the church. Father Anthony Homar, at the church from 1951-1960, once told a young man, “For Spanish speaking people, my son, the church is much more than a religion, it is our heart. To leave the church, is to abandon your very heart.” Holy Family Church has been the heart of the Hispanic community these past 90 years. Unlike most Catholic churches which cover a geographically defined parish, Holy Family’s parish extends over all of Northern Colorado to include all Spanish speaking people in the area. This “heart” of the community is quite literally, therefore, a church for the people.

Additional articles to look forward to:

Prejudice within the School District: I have been a vocal advocate for Lincoln Middle School for the past 5 years. All three of my children attended the school and received not only a rigorous education, but they also learned about being active participants in building a strong, cross-cultural community. But Lincoln Middle School also has the highest percentage of non-white kids of any middle school in the city, and is stereotyped accordingly. The prejudice in the community became evident as we told people what school our kids attended. Even teachers from other schools frequently marginalized our kids because of which middle school they attended.

The Hispanic Community in Fort Collins through the eyes of the Valdez family: I spoke with Don Valdez on the phone on Monday and we’re hoping to get together in July to talk more about the Hispanic community and its history in Fort Collins. I look forward to having several good stories to tell from that meeting.

Racism in Fort Collins: Although I had once planned on doing a general post on the history of racism in Fort Collins, I’ve come across so much material that is specific to racism against Hispanics in the city that I now plan to do a post dedicated to that topic alone. It’ll be a downer post. But hopefully it’ll also be a catalyst for change.

All photos for this article (except for the very first photo at the top) were thanks to Maria Fuerte, at Holy Family Church.

Much of the history of the church was taken from books of the history of the church that the congregation had compiled for various anniversaries, most notably the 75th anniversary. I was able to access a copy at the Archive at the FCMoD, but the Brother at Holy Family also photocopied much of that book for me. And Maria Fuerte copied additional information on the fire that took place inside the church. It was in speaking to the Brother and to Maria that I really got a sense of the situation of the church, as a church and as a subset within the larger community of Fort Collins. I really appreciate them taking their time to speak with me. (And for putting me in touch with Don Valdez who I will hopefully be writing about within the next month or so.)

I couldn’t find an inflation calculator that would convert 1900 dollars to 1929 dollars. But by using a couple of different calculators, I was able to get a general sense of the difference between the $12,000 spent on St. Joseph’s and the $12,000 spent on Holy Family. This calculator converts old amounts to 2014 dollar values. The CPI inflation calculator can convert 1913 dollars to 1929 dollars. The cost of St. Joseph’s church building can be found in the history section of their website. And the cost of the Holy Family Church building is from history documents that I viewed at the Archive as well as in the Holy Family church office.