A friend recently loaned an old folder full of stories to me. It had been compiled in the 1970s from the scrapbook of the Society of Early Pioneer Women as well as from interviews with daughters of pioneers. Though I’ll write more about the booklet at another time, I wanted to share the following story with you that caught my eye.

Just before Christmas of 1861, a son of Louis Cyr, a husky young French-Canadian, called at the Sherwood ranch situated on the Poudre River bottom five miles southeast of Fort Collins. He inquired for the Judge but was told he wasn’t there. Young Cyr called two more times. Then on the first day of January, he made his third call but the Judge was still absent. “Bill” Sherwood asked if there was anything he could do. Young Cyr told him he wanted to get married.

“If that is all you want, I can perform the ceremony,” said Sherwood. The young swain refused to be married without a Bible so Sherwood  brought out a large volume of Shakespeare’s works which satisfied Cyr.

On arriving at the home of the “bride-to-be,” the young lady had disappeared. She was the daughter of Suis Lewis and his Indian wife and was as wild and timid as a fawn. After a vigorous search, she was found hidden under a pile of blankets. She then was married by the most intricate method that frontier methods and wits could devise using over an hour of time and witnessed by two gamblers, McIntosh and Rice.

After the ceremony, Suis Lewis, father of the bride, insisted upon a marriage settlement which he proposed in the following manner: “You make paper that if my gal behave and boy get drunk and raise the devil, my gal gets all his horses. If my gal do wrong, he tell her go hell.”

This story is not attributed to any author, but it can also be found in the Sons of Colorado magazine from January 1908. Luella M. Rhodes, one of the earliest members of the Society of Early Pioneer Women, was the author. It is also found, in more embellished form, in Ansel Watrous’s History of Larimer County, Colorado. Given that Ansel’s book was published in 1911, it’s likely that he used Rhodes version as the fodder for his own rendition of the story. 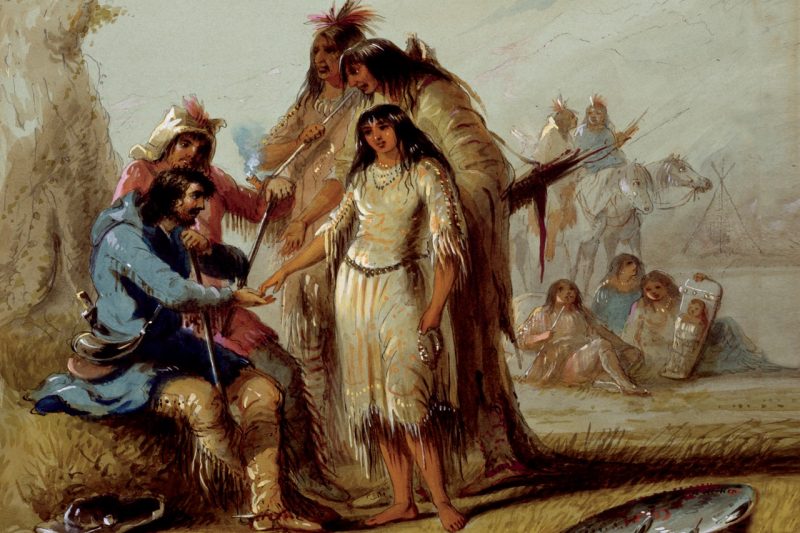 Detail from Alfred Jacob Miller’s “The Trapper’s Bride.” Author Andrew Graybill’s book, “The Red and the White,” looks at three generations of a mixed-race Native American-white family. From On Point with Tom Ashbrook.

Unfortunately I have not been able to find any other mention of Louis Cyr or his son, nor Suis Lewis (called Jesus Lewis in the Sons of Colorado version of the story) or his daughter.

Although the tenor of the story is light hearted and clearly meant to bring a chuckle from its audience, it also shines a light on the treatment of women in the day. On the one hand, the girl appears to have been joined in this marriage against her will. It was probably a decision made by her father, not by herself. On the other hand, her father insisted on a prenup agreement that would favor her if her husband turned out to be a drunkard.

One of the treasures of this collection of stories is that it was written by pioneer women with an eye toward the duties, social events, clothing, and experiences of women in particular. Watch for more excerpts in upcoming articles.

The Society of Early Pioneer Women still exists today! It is now called the Pioneer Women Association. Female descendants of the early pioneers (or at least of families that have been in the area for several generations) as well as women who have been in northern Colorado for at least the past 30 years, can become members. The women meet on the first Friday of each month, and the current head of the women’s group, Judy Jackson, is the same woman who loaned me this collection of stories.