When Laurel Street Was the Center of Midtown

Today the term “Midtown” is used to refer to the area south of Prospect (SoPro) and north of Harmony (as seen in the “Midtown Plan” that the city council adopted in October 2013). But not so very long ago, Midtown referred to the neighborhoods that straddled E. Laurel Street all the way down to the Fort Collins High School (now the University Center for the Arts) on Remington. Today this area is known as Old Town East (despite the fact that the term “Old Town” historically only referred to the part of downtown within the triangle).

Sigh. I wonder how often old timers listen to newcomers and wonder if everyone’s talking about the same city when the same exact names now refer to totally different parts of town. Needless to say, today the Midtown Historic District is generally referred to as the Laurel School Historic District. (Cough. And by “Laurel School” I mean the building that now houses Centennial High School, not the school located on E. Locust Court named Laurel Elementary. See what I mean?!)

“Located in Fort Collins, Colorado, the Midtown Historic District is a residential area that reflects the characteristic features of a middle-class farming community that developed in the late nineteenth and early twentieth centuries.” – description from the founding documents for the district.

The documents that were filed with the United State Department of the Interior in 1980 also state that,

“The District includes 665 properties. Of these 549 contribute to the historic and architectural fabric that gives the District its integrity; another seventy-two are more modern buildings that are nonetheless compatible with the older structures; and another forty-four are intrusions that detract from the fabric of the area.”

Unfortunately, those numbers have changed over time. The Button House is a well known recent example of a historic house that has been lost. 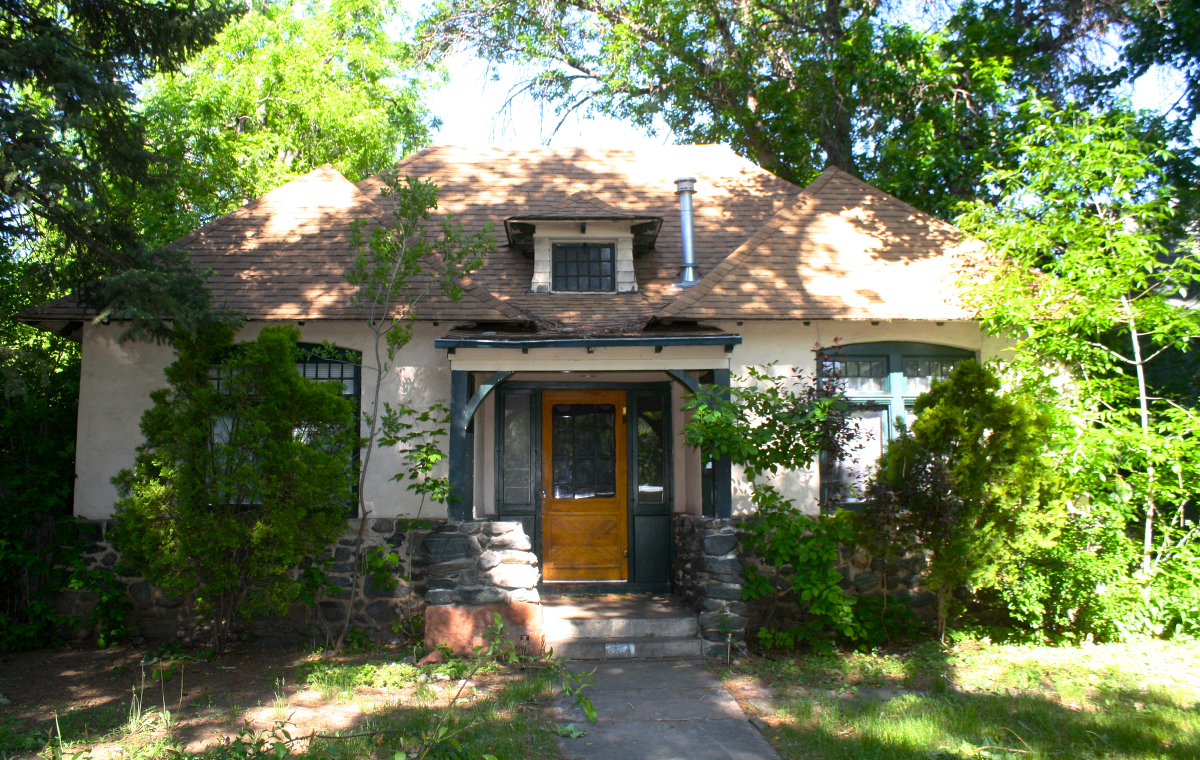 The Button House as it looked in June 2013. This house was taken down in 2014 after the previous owners had essentially demolished it through neglect. The house had been built in 1897 and had an Old World feel to it.

But other buildings have also been modified, or demolished and replaced, as well. Not every occurrence makes the news as the Button house did. 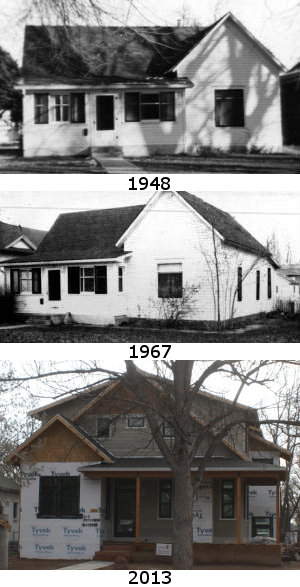 616 Peterson Street was listed as a contributing historic house in the 1980 document for the historic district. But in 2013 the house was replaced with a new structure. (The two older photos are from the county assessor’s files and can be found at the FC Archive – 616pet48 and 616pet67.) This is just one example. I’m sure there are others.

Unlike historic districts in many cities, this district is made up of many Plain Jane types of houses, reflecting the simple origins of our city. Unlike Denver, Boulder, and Colorado Springs, all of which saw an influx of money from mining and other sources, the history of Fort Collins is grounded first and foremost in agriculture, which was not a particularly lucrative business at the time (and many would say it still isn’t today). Because of our city’s humble beginnings, many of the houses in the Laurel School Historic District are also of humble style. The chief exception to this rule lies upon Remington Street where those who had made a pretty penny on real estate, or livestock sales, or through some other means were wont to build grand mansions. Unfortunately, many of the grandest of these were torn down to make way for new buildings and parking lots before the historic district was created.

“The Midtown Historic District developed over a sixty-year period, but throughout that time it retained a certain uniformity. A vast number of the structures are small, one-story brick or frame cottages rectangular in shape. They have few decorative elements, but are unmistakably late Victorian. On Remington Street, however, are a number of larger, more elaborate brick houses designed by local architects. These buildings clearly represent the Italianate, Queen Anne, Eastlake and other thrusts of Victorian architecture, as well they might, for they were constructed for the wealthier, more prominent people in the city. And finally, scattered through the District are schools, churches, and other buildings that characterize a residential neighborhood.” – description from the founding documents for the district.

Depending on how you count it, there are either 2 schools, or 4. The old Laurel Elementary school, for which the district was named, is now Centennial High School. And the old Fort Collins High School is now the University Center for the Arts – CSU. But one of the first buildings built to be a school is also in this district. After being used as a school for eight years, the local Catholic church used the building until Saint Joseph’s was built in 1901. 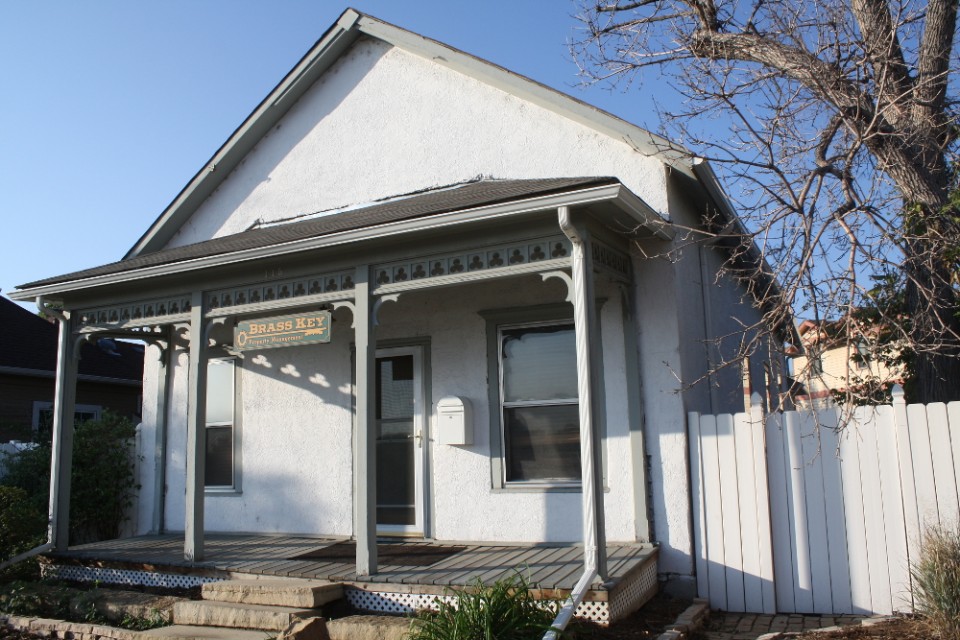 This was the first building constructed to serve as a school and the first Catholic church in Fort Collins. It was turned into a residence in the early 1900s. It is located at 115 Riverside.

There are several apartment buildings within the district, but only one is listed on the historic district nomination form as being historic — Kensington Place. 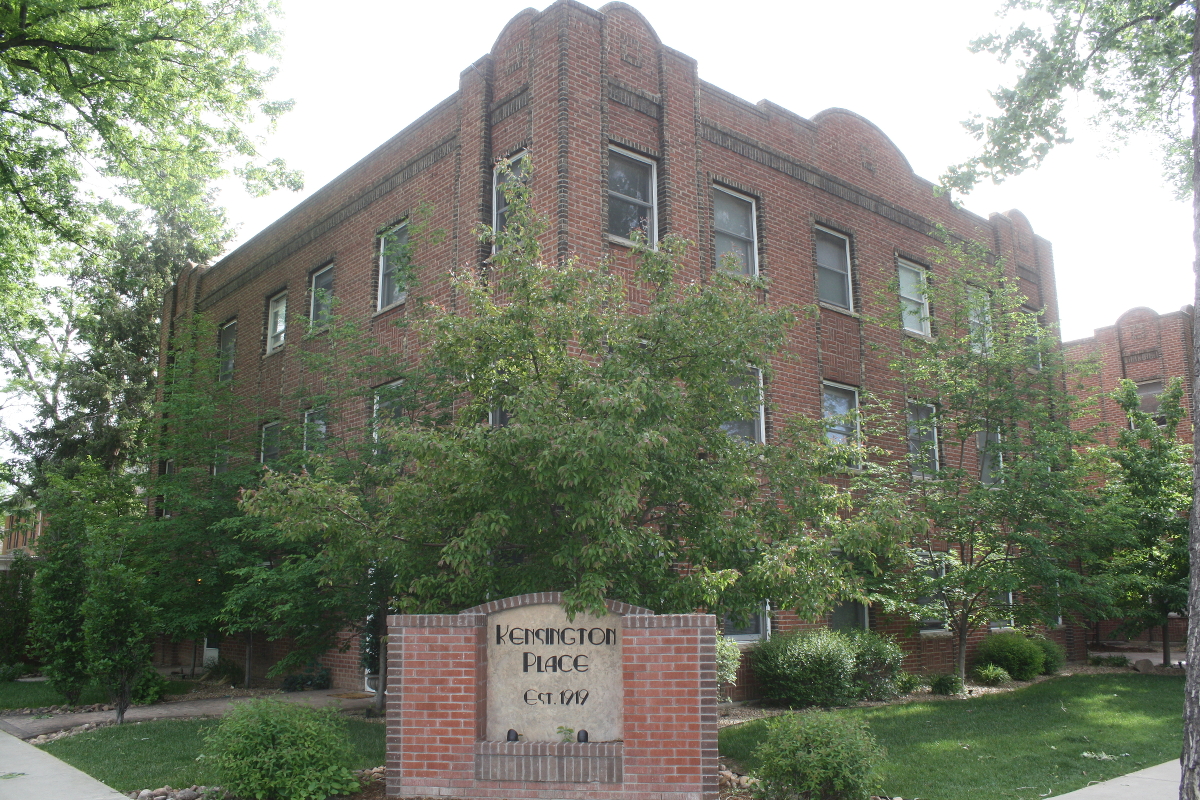 Kensington Place was built near campus along a street that also had a school and a small grocery.

There were at least five grocery stores in the district, all of which are now used as residences. One was the Laurel Street Grocery, right across from the elementary school (now high school). This is the only one that was listed as having originally been a grocery in the historic district documentation. There was the East Side Grocery, which was later called Carpenter’s Hall, at the corner of Magnolia and Whedbee. The South Side Grocery was located at 318 Pitkin Street. Bob’s Market used to reside at 338 E. Elizabeth.  (The 338 E. Elizabeth property appears to have been left off of the nomination form altogether, despite the fact that its neighbors are all included.) And the Plum Street Grocery sat at 411 E. Plum. 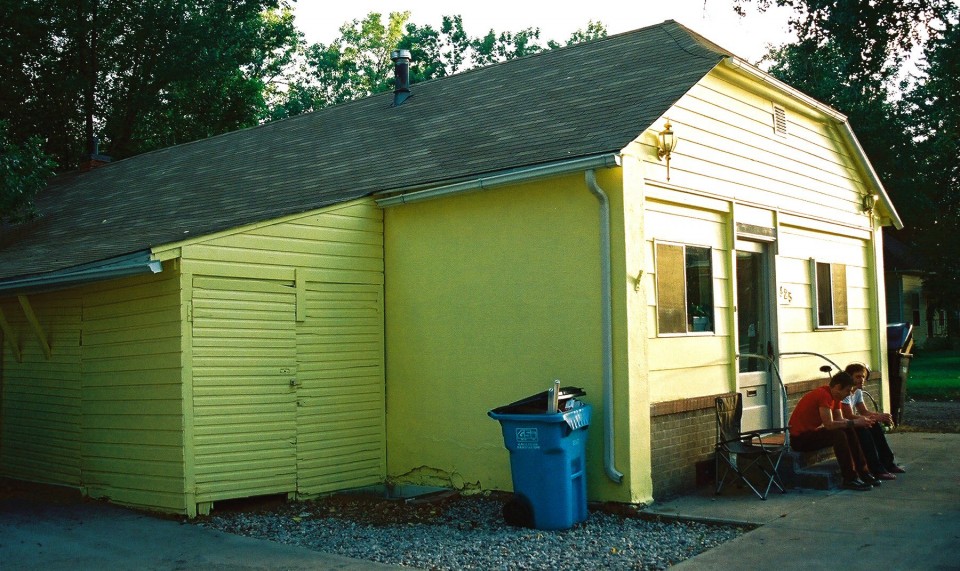 The Laurel Street grocery, after it had been turned into a residence. (Photo courtesy of Paul Schonfeld.)

There’s a library in the district, but it was added after the period of significance, so it’s not historic. But there is also a historic library in the district, made even more significant by the fact that it was built in part through a grant from Andrew Carnegie (yes, THE Andrew Carnegie). He selected Fort Collins as one of the recipients of his grants because he liked the fact that we were a dry town (no alcohol allowed). Little did he know that we’d one day become the “Napa Valley of Beer”. The old Carnegie Library became the local history museum when the new library was built. And when the history museum was folded into the Discovery Museum and the new entity became the Fort Collins Museum of Discovery, the old building came to house the Arts Incubator. 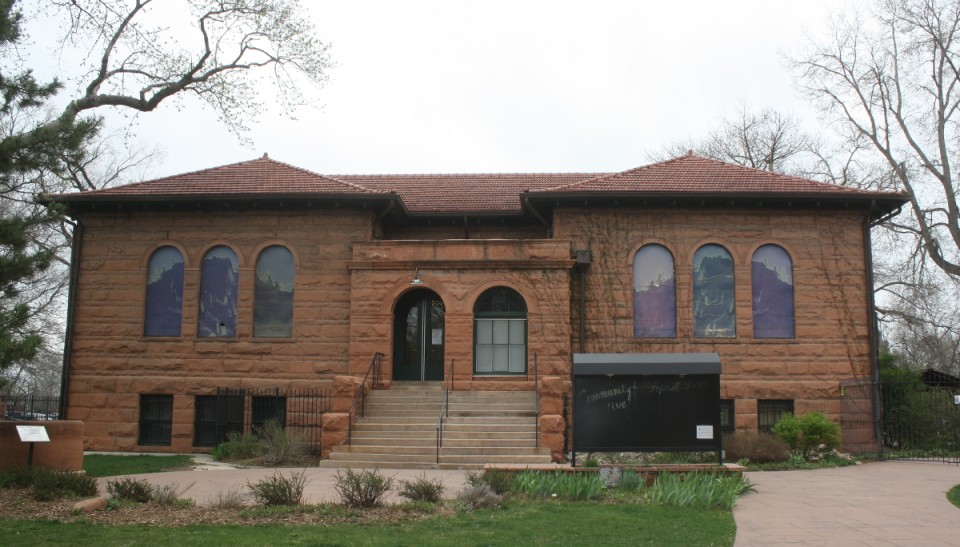 Albert Bryan was the architect of the Carnegie Library, which was built in 1903.

There are also four historic cabins that have been moved to the courtyard area just to the south of the old library. There you can find Auntie Stone’s cabin, the Upper Boxelder School, the Franz-Smith cabin and the Antoine Janis cabin. 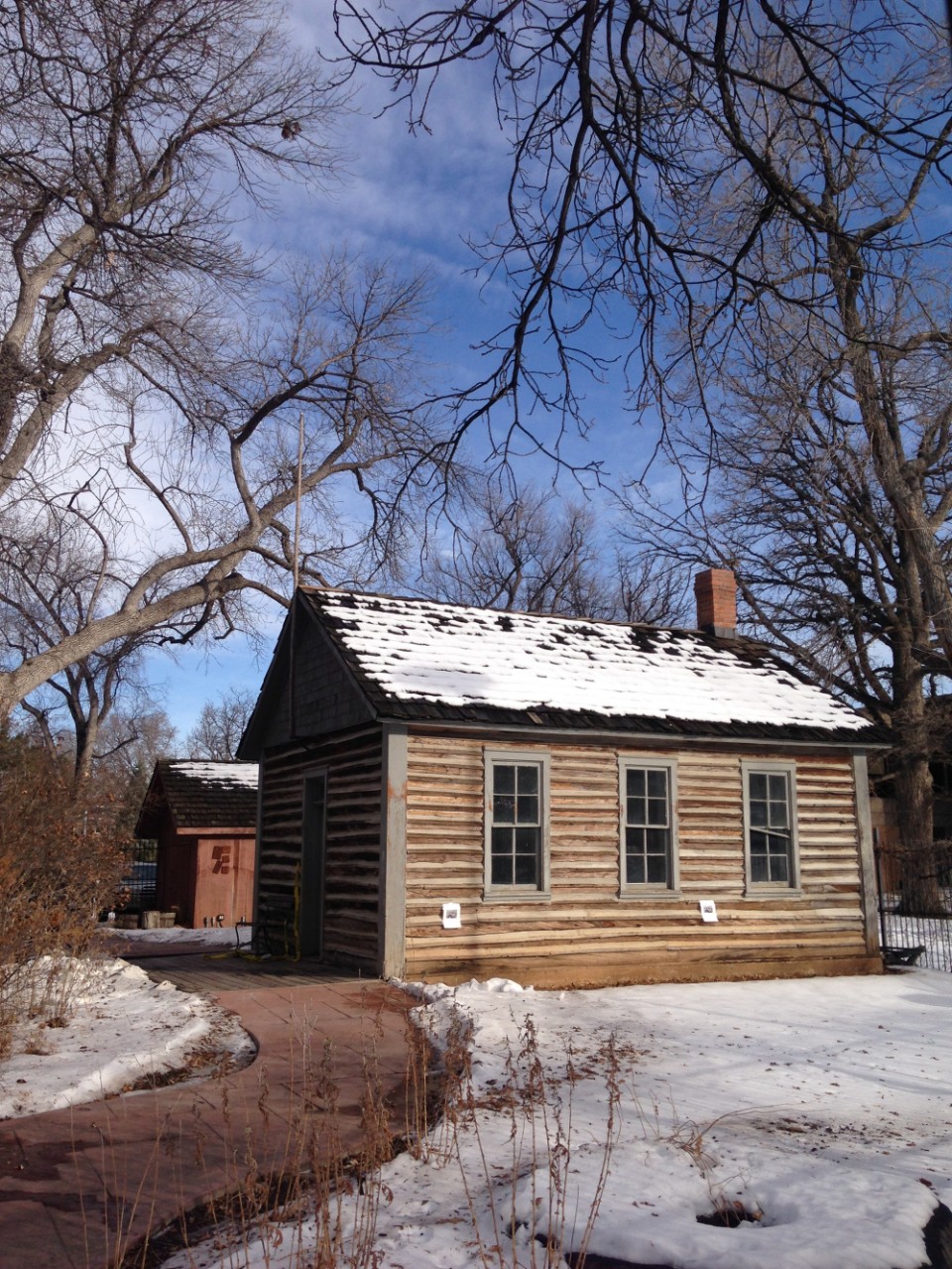 And there are seven churches in the historic district, including the one on Riverside that was already listed above.  Two of the churches are still houses of worship, though the congregations have changed several times over. These would be the old German Congregational Church at 201 Whedbee and the old Bethlehem Evangelical Lutheran church at 300 Whedbee. The People’s Tabernacle, at 717 Whedbee, was also still being used as a church recently, although last I saw the building was up for sale. The old Adventist church at 400 Whedbee is now a residence.  And the last two churches, St. John’s (305 E. Elizabeth) and the First Church of God (500 Mathews), were included in the list of newer “intrusions” into the district. 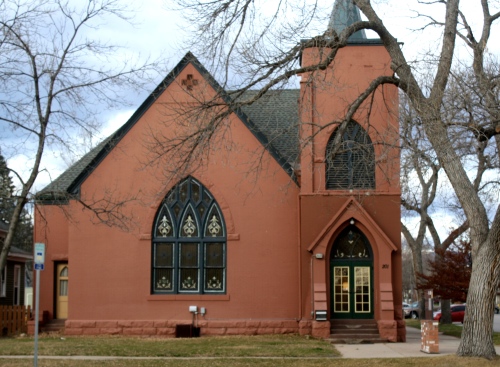 This church was built for a German congregation in the early 1900s. It was designed by Montezuma Fuller. It stands at the corner of Oak and Whedbee and is one of seven church buildings located within the Laurel School Historic District.

I find it interesting to note that multi-use residential neighborhoods were the norm 100 years ago. And there was a sense of what was appropriate in a residential neighborhood (small grocery stores, schools, and churches) and what was not (all the other businesses that were clustered around downtown rather than spread out into the community). Places where children might frequently visit were included in the midst of a neighborhood in order to grant easy access to those who were probably going to be walking as their chief means of transportation. Multi-use neighborhoods are making a comeback in America and I believe our current planning code encourages this kind of development today.

The Laurel School Historic District is a real treasure in Fort Collins, with several incredibly important and significant buildings within its boundaries. But because it is only on the National Register and not on the local register, it’s vulnerable and important buildings could be lost. Hopefully the financial incentives of being within the historic district will encourage home owners to maintain the integrity and historicity of these buildings that are such a significant piece of Fort Collins history.

Cat McClintock’s post from Lost Fort Collins entitled Tour de neighborhood markets was invaluable to this post. There are several stores that, from looking at the landmark nomination form, I never would have known had once been stores. Landmarking back in the 1970s and 1980s was not as rigorous a process as it is today and it appears that a great deal of important historical information has not been captured for this district. So if anybody’s looking for a history project to dig into….