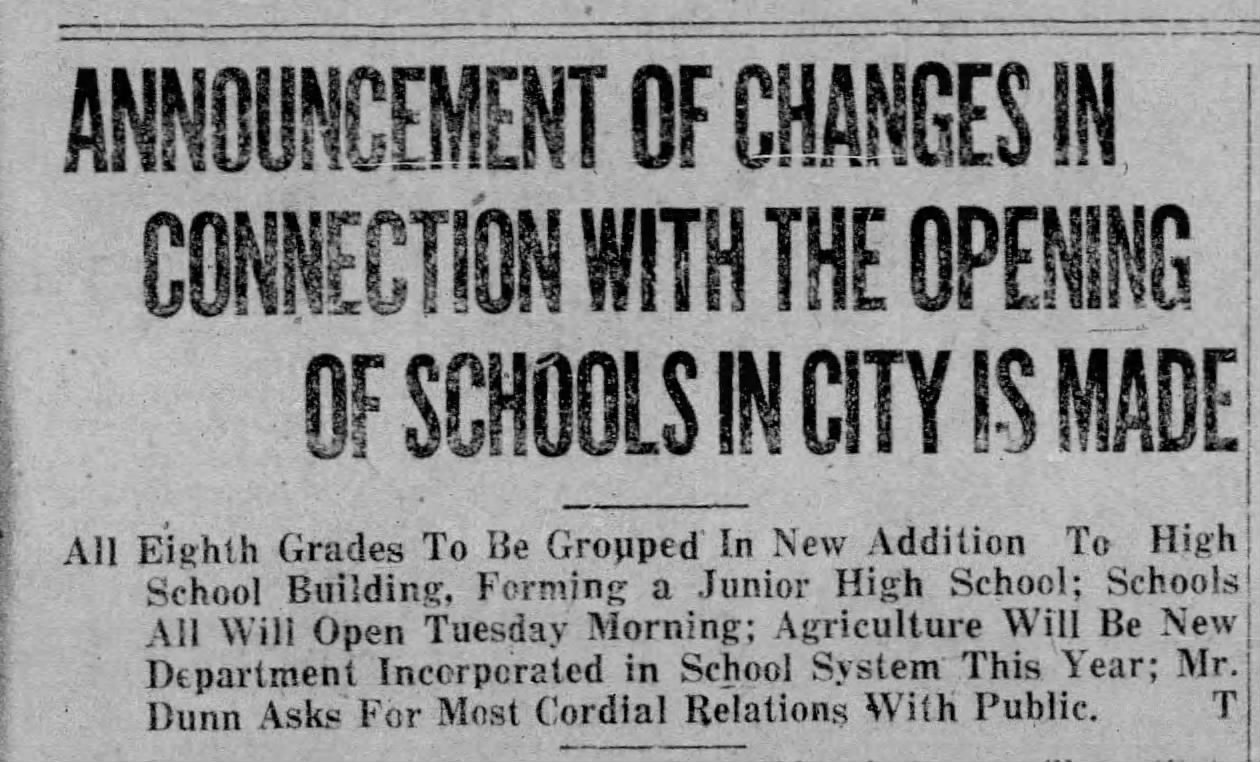 In 1921, a northern addition was added to the Fort Collins High School. The plan was to use the space for grade school classes (1st-8th) until the high school needed to expand into the space. In January, 1922, the addition was finally ready for students and Superintendent Dunn declared that finally crowded school conditions had been alleviated. 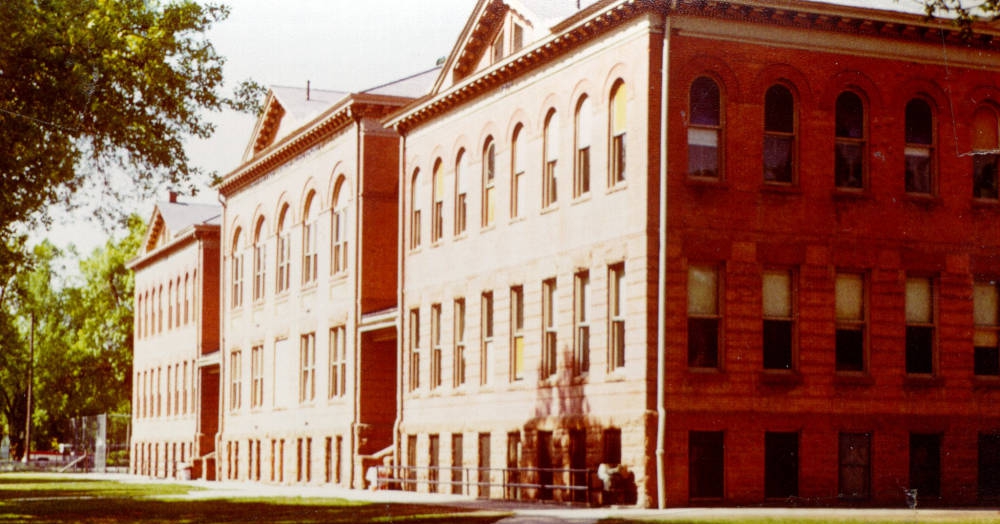 (Photo from the Archive at the Fort Collins Museum of Discovery, H09964.)

But, the very next semester, at the start of the 1922-23 year, it was decided that a brand new Fort Collins Junior High would be given the use of that new addition, sharing a building with the high schoolers, but having a section to themselves.

Unlike grade schools, where students had one teacher all day, different teachers would cover different subjects.

It was on September 2nd, 1922, that the announcement came out in the Fort Collins Courier about changes taking place in the Fort Collins schools. High schoolers were to have a new series of classes related to agriculture, classes would begin the day after labor day, and Fort Collins was going to have its very first Junior High. 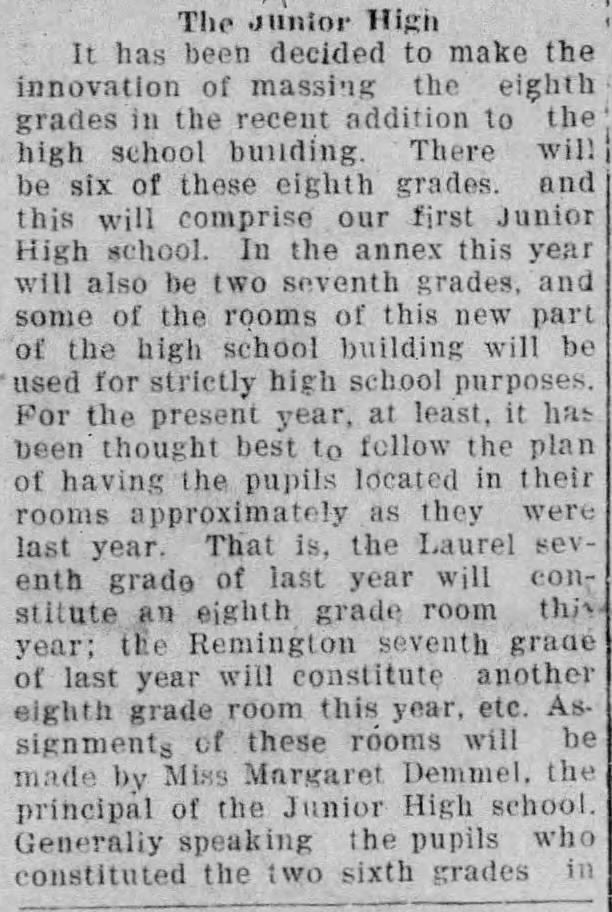 By February 27, 1923, the Fort Collins Express complained that the high school was overcrowded again. (That didn’t take long!) There was increasing talk of constructing an entirely new school for 9th – 12th grade. 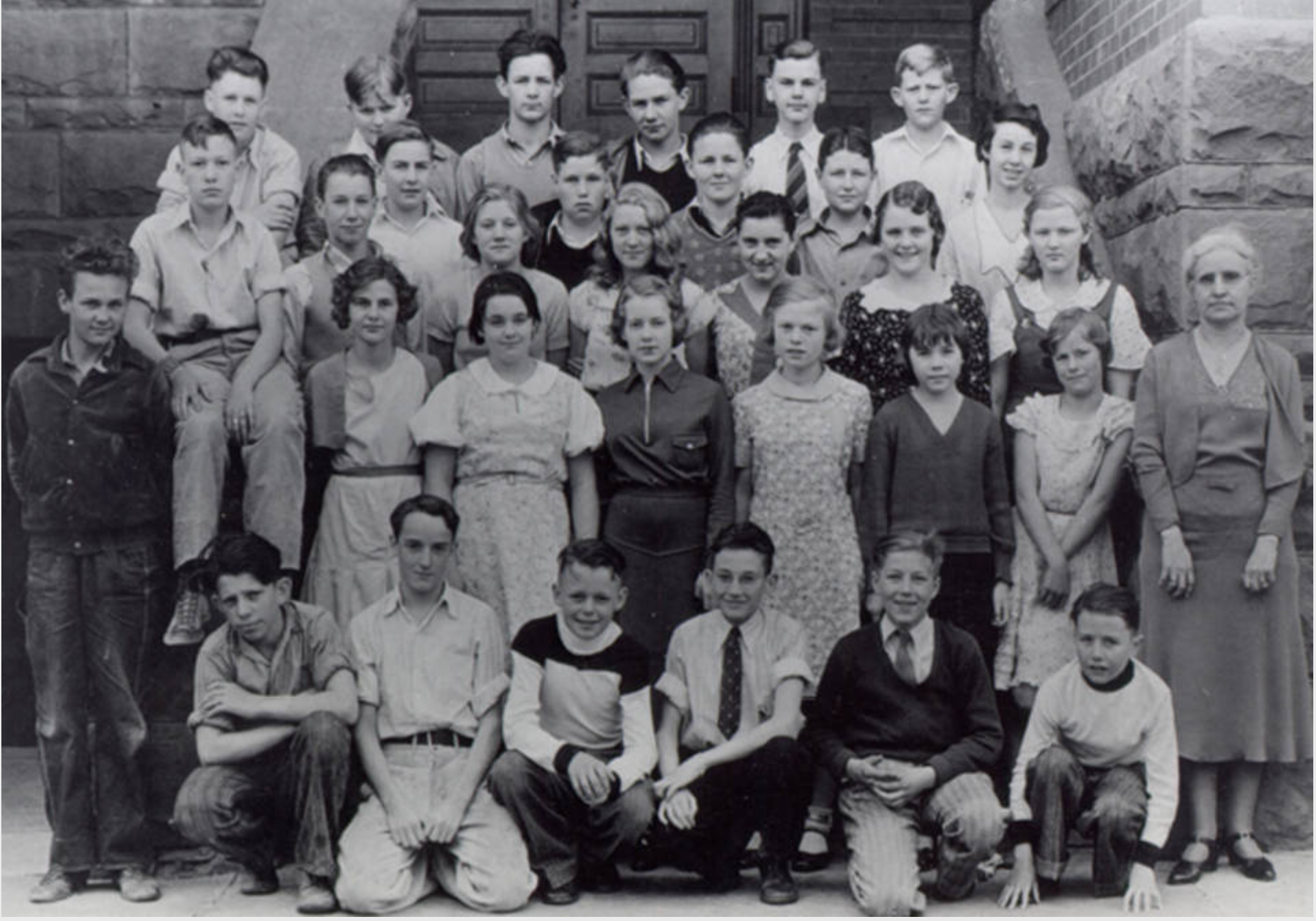 Jesse Moore’s junior high class. (Photo from the Archive at the Fort Collins Museum of Discovery, H09135. Several of the kids are identified on the Archive’s webpage of this photo.)

The Fort Collins High School building on Meldrum at Magnolia ended up becoming the Junior High building when the high schoolers moved over to their new place on Remington Street in 1925.

The second page of the Fort Collins Express-Courier on June 27, 1939, declared that the junior high had been given a new name. 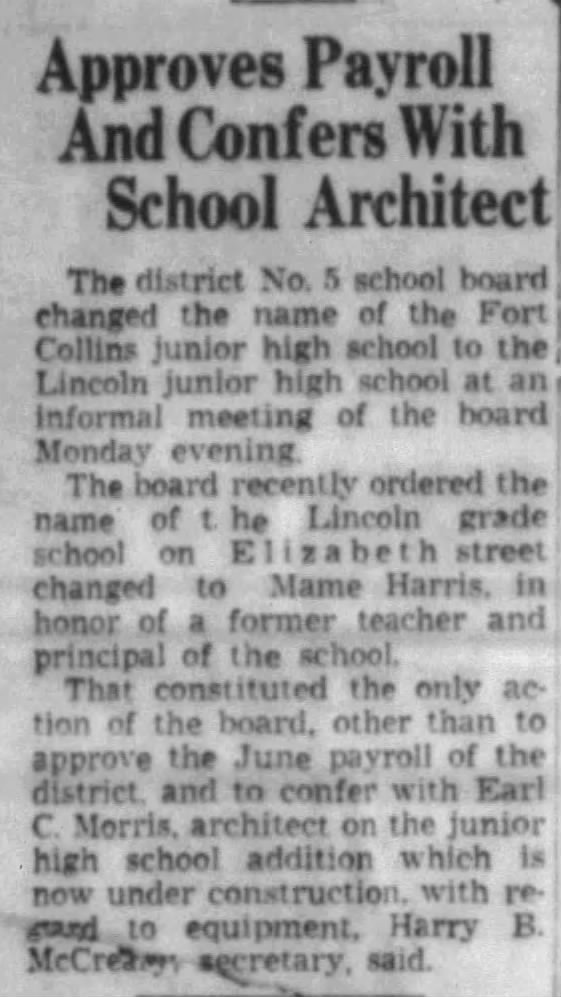 Closeup of the relevant part of the Fort Collins Express-Courier article shown above.

Early elementary schools had been named for their location. The Remington School (1879) was located on Remington Street. The Laporte School (1906) on Laporte Avenue. The Laurel school (1906) on Laurel Street. The Franklin school (1887), on W. Mountain Ave, was an exception to this rule. But it did open the way for a shift in the naming convention so that in 1919, when two more elementaries were added, they were named George Washington and Abraham Lincoln.

It was also in 1939 that the ninth grade was moved down from the high school to the junior high. 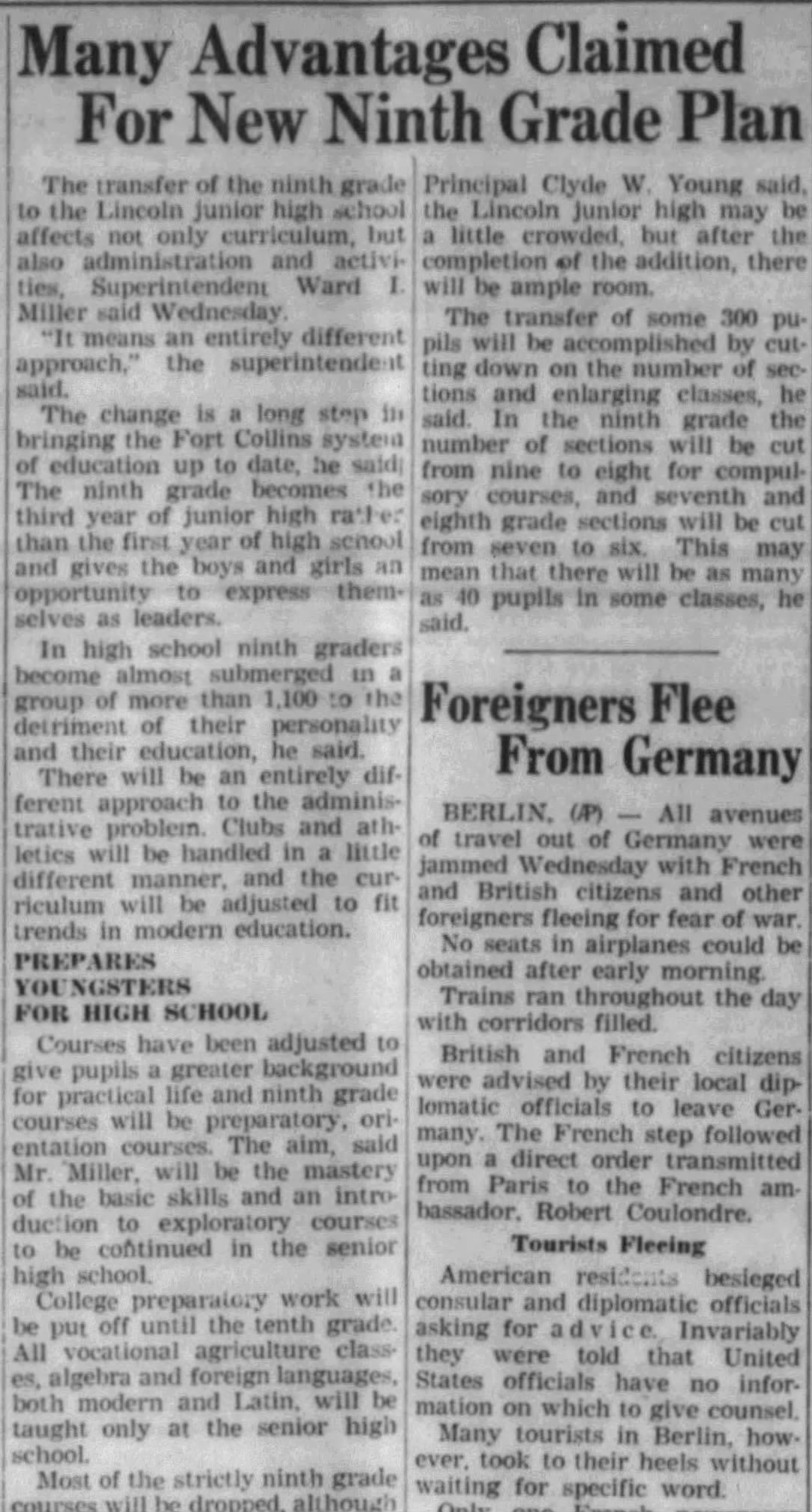 Ninth grade was moved to the Junior High in 1939. This clipping is from the 23 August 1939 Fort Collins Express-Courier. 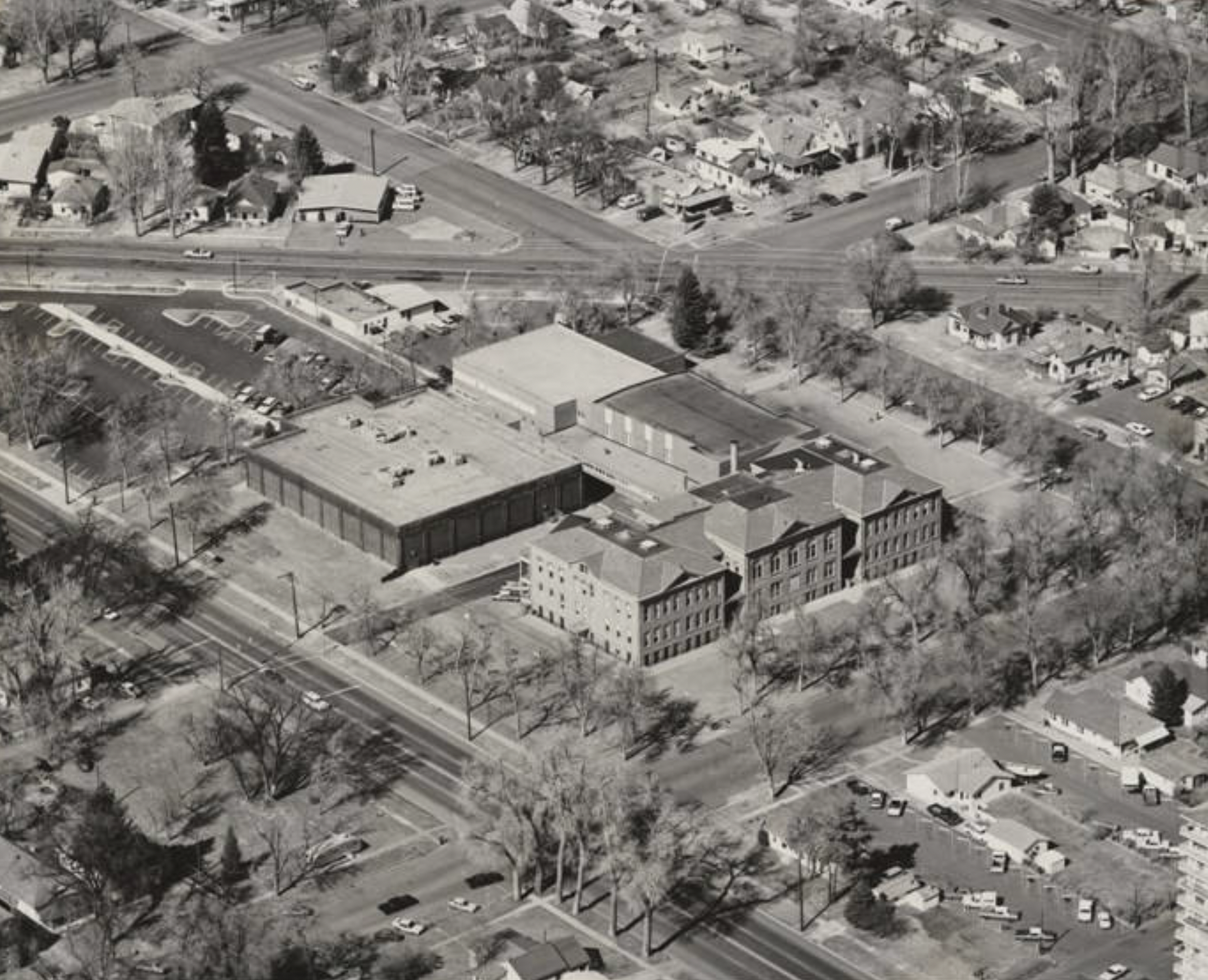 This aerial photograph of Lincoln Junior High school shows how the school continued to expand over time. The photo was taken around the end of 1974 or early 1975, after the Mulberry Pool had been added in what had previously been playground area. (Photo from the Archive at the Fort Collins Museum of Discovery, H25122.)

But even before the pool had been built, there were already plans in the works to move the junior high school to a new location.

The July 25, 1973 Coloradoan included a sketch of what the proposed new school would look like. 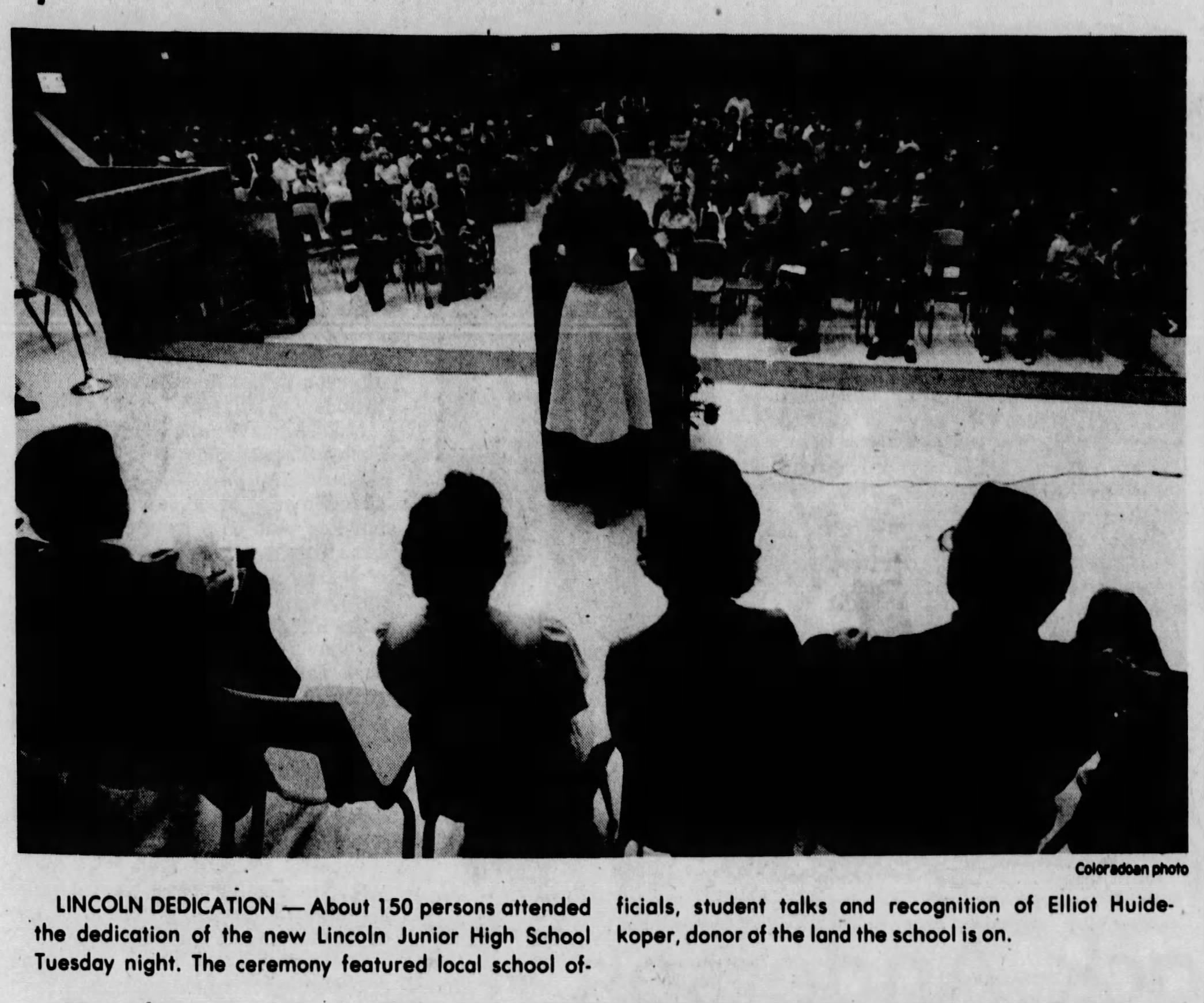 Newspaper clipping from the November 19, 1975 Coloradoan.

Funded through a 1969 bond, the construction of the new school building was not without some controversy. Inflation meant the school was going to cost significantly more than the school district had anticipated. Construction issues required the architect to design new joints for the corners of the building that were already cracking before students had even moved in for their first day of classes. And many were heartbroken over the demolition of their former junior high building on Meldrum.

But eventually the school was ready and a dedication was held on Tuesday, November 18th, 1975. Students finished out the year in the old school and classes began in the new building in September 1976.

Thanks to Elliot Huidekoper, the new school was situated in a beautiful location with ample room for sports fields, tennis courts, and a park.

Students played football in Lincoln’s beautiful “back yard” in October 2012.

I did a shout out in August 2022 for memories of Lincoln. Unfortunately I only received a few responses. I want to share them here. But I always want folks to know that if you’re inspired to share something after having made it this far down the page, I would love to add it here. So please send me photos, memories, messages to present-day students or teachers, etc. at meg@northerncoloradohistory.com. I will be updating and improving this page probably for this entire anniversary year. So stop back once in awhile as well just to see what’s new.

I went there for 7th and 8th grade and was in the first 9th grade at the “new” Lincoln. The scariest memory I have of the old Lincoln was my first week there in 7th grade. I had Home Economics on the 3rd floor. The problem was, I didn’t realize the 3rd floor was actually two different sections. I went up the wrong stairway to my class and got lost in the wrong section. What a way to start junior high school and figure out that I had to find the other staircase on the other side of the school to get to class. Also, watching horror movies for Halloween in the auditorium was really spooky in the old school. I hate watching horror flicks to this day after watching Tales of the Crypt there! De Wain Valentine was a sculptor affiliated with the Light and Space movement. He was commonly considered to be among the first artists to enlist plastic as an artistic material. De Wain attended Lincoln Junior High. 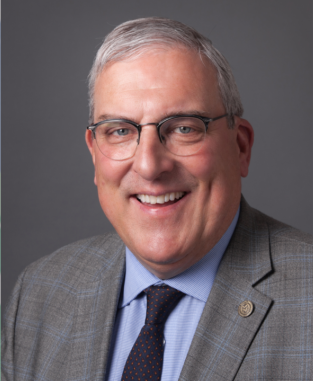 Randy Fischer was a Member of the Colorado House of Representatives from January 10, 2007 – January 7, 2015. He is also a Lincoln Junior High alum.

I was a lancer. My favorite teachers were Mr Kramer, Mr Joey Gorham, Mr Alms, Mrs Rice, Mrs Ellison, omg all of them. My all time favorite, I will never forget, was Mr. Miller. I cut my cast off my arm in his shop class with tin snips!! He didn’t know and boy was my mom mad!! Our home burnt down when I was in 7th grade, 1991 I believe, and the science rooms filled with donations for our family. I played on softball and in orchestra!!! All of us will always remember our lost classmates, Robbie Ann Solsburg, and Jeremiah Dean Harris, Jimmy Olivas Rip, I made friends with whom I am still friends with 30 years later!!! My sister and I both spent three years there, 7, 8, 9! 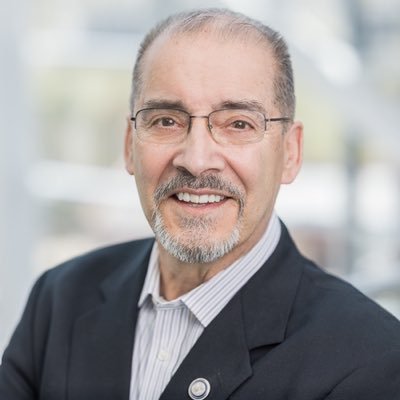