“Sometimes someone comes into your life that changes everything — raises the standards, makes you laugh, and makes you feel like you.  There is something about her that you can’t put into words, and even though you’re not with her, you don’t want to let her go.”  –  Unknown 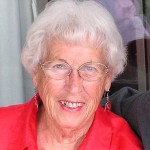 Though I’d never met Liz Case, after spending time with her two daughters, Lizbeth and Laurie, I can tell that she was exactly the kind of person that came into people’s lives and changed them for the better. With March being Women’s History month and this past Saturday being International Women’s Day, I think it’s appropriate to focus on a remarkable Fort Collins woman that didn’t just live in our city, but who wove herself into the very fabric of Fort Collins — as a mother, a CSU alum, a strong supporter of local schools, an actress, a singer, a church member, a gardener, and a caretaker to people in need of all ages and origins. 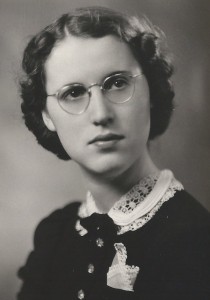 Elizabeth Marion Bradley was born in Brooklyn, Iowa on June 24, 1921. When she was eight, her family moved to Littleton, Colorado where she graduated from high school in 1938. Moving north to Fort Collins, Liz majored in home economics at Colorado A&M (now Colorado State University). During that time she met Stewart Case, a third generation Fort Collins resident. As with many young couples in that day, World War II dictated some of the details of their lives, and for Stew and Liz it meant a wedding in Seattle where Stew had been stationed with the Army’s barrage balloon unit (whose mission was most likely to protect the Boeing aircraft plant). Though Liz’s parents were able to travel to Seattle with her and attend the wedding, Stew’s parents couldn’t afford to leave their business unattended for that length of time and remained behind.

After the war, Stew continued in the Army reserves, so when things became heated in Korea, Uncle Sam called him up for another tour of duty. By this point, the couple had three young kids and a fourth on the way. Stew was in Korea for over a year, and then he was stationed in Michigan for another 6 months before he was allowed to come home. Anxious to see her husband, Liz packed up her 4 young children and, over Christmas Eve, she cajoled and appeased them during the train ride to Michigan where they stayed with Stew during that 6th month period. Gary was 9 months before Stew got to see his youngest son. 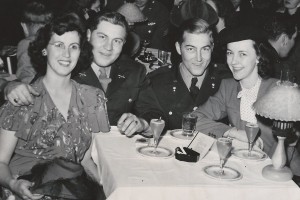 In 1953, Stew and Liz were able to move back to Fort Collins where they purchased a house on the east side of Old Town — 900 Smith Street. (The house is still listed as the “Stew Case House” in the historic records online, though the house has never been officially designated as a historic landmark.) Even though Liz was a transplant to Fort Collins, she set down roots quickly and immediately became an integral part of the community. She was involved in the PTA at Harris Elementary school. She led two Girl Scout troops at Harris, and when she realized the girls at Holy Family School had no troop, she started one there as well. (When the school was closed in 1969, the troop shifted along with the students to the Laporte Avenue School where Fullana Learning Center is currently located.) She was also a cub scout leader.

Liz was a busy woman and didn’t have much time for petty ills. She pushed the people around her as much as she pushed herself, which she sometimes later regretted. Her youngest son, Gary, wasn’t always responsible about getting his newspapers delivered when he should. One day his papers were waiting to be delivered when he called home to say that he’d hurt his foot in a bike accident. His mom insisted that he get home immediately to deliver his papers. A little while later a man drove up to drop Gary off. He’d seen the boy limping along home with his bike. It turns out that Gary had broken his foot. Liz felt bad that she’d been hard on her son, but what mom hasn’t pushed their kid in a similar situation only to realize later that there was more at issue than she knew?

Another time Liz and the kids were out shopping when Laurie complained of pain in her tummy. She was whining, which was very unusual. Her mother sent her to the car while the rest of them finished shopping. When they got home, Laurie didn’t eat dinner. Finally Liz called up a doctor friend, Bob Bliss, and asked if he could swing by the house on his way home from work. She probably hoped that he’d convince Laurie that it was just a belly ache that would be over soon enough. Instead it turned out to be an appendicitis and Laurie had to be operated on that night.

But Liz didn’t only push her children hard. She was just as hard on herself. One year Gary came down with mumps. Two weeks later the third child, Greg, contracted mumps as well. Soon after, both Laurie and Liz had mumps. Liz was an actress in the Town and Gown Theater that performed in Old Main on campus before it burnt down. There was a performance while Liz was sick and there were no understudies. Liz decided that the show must go on. Her part kept her on one side of the stage, away from the other players. So she threw a scarf around her neck and sallied forth. 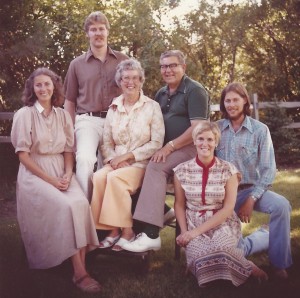 In addition to acting in the Town and Gown Theater, Liz also sang with the Sunshine Singers. She had a couple of jobs, taking surveys by phone and babysitting neighbor kids. In fact, the neighborhood kids often liked to come over to play. Every year Liz preemptively went to Harris and Laurel Elementary Schools and explained to the kids the rules for using the tree house in the back yard. No one was allowed to go up in the tree house until they were at least 7 years old. It was not uncommon to get a timid knock on the door from a small neighborhood kid who would explain, “Today is my birthday. I’m 7 now. Can I go play in the tree house?”

It wasn’t just neighborhood children that were welcomed into the Case household. Foreign exchange students from Colorado State University were embraced as well. The students hailed from all over the world, from countries such as Pakistan, Ecuador, Brazil, Holland, and Germany. Many of these students remain close friends of the family even to this day. Liz and Stew also started to take in high schoolers once their own kids were grown. It started when Lizbeth, Laurie, and Greg had all moved away and Gary was a senior at Fort Collins High School. The parents of one of his friends were moving, but the boy wanted to finish high school here in town. So he moved in for the year. After that, the word got out that Liz would take in strays and before long she was receiving calls to take in this or that struggling teen. After one young man moved out, Liz found a new plant growing alongside one of her potted plants. She took it to the police station and asked if it was marijuana. They replied, “Where did that come from?” That was all Liz needed to hear. She didn’t cop to the fact that the plant had been growing in her house, but she did toss it out as soon as she could. 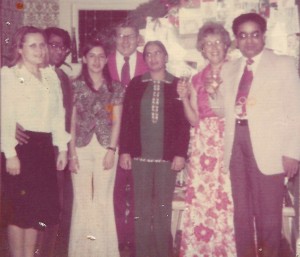 I’ve barely scratched the surface of all that Liz did during her active life. She was a leader of people and became president at one time or other of several different organizations including the Children’s Theater, Harris School PTA, Chapter G PEO, the Historical Society, CSU Host Family program, Mountain Prairie Girl Scout Council, CSU Women’s Association, Lady Elks, and the Pioneer Association. She also served as an election judge, volunteered for the United Way, was active in the Poudre Landmarks Foundation, the Christian Women’s Association, and the National Association of Retired Federal Employees. She was an active member at First United Methodist church which was only a block from her house. And she delivered Meals on Wheels for 38 years, a record which has yet to be broken by any other volunteer. She loved to garden and her house was on the city garden tour three times. Gulley’s even came yearly to harvest some of the plants she grew and when the Olympics were hosted in Utah, descendants of plants from Liz’s garden were there on display. 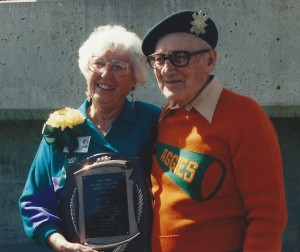 She was an active CSU supporter and often attended football and basketball games. Together the couple started the Stewart and Elizabeth Case scholarship at the University. They both continued to be active at Fort Collins High School as well. Stew started the 50+ club for Fort Collins High School alumni and Liz soon took over, planning the yearly brunches and overseeing the scholarships that were given out to Collins students. She was so involved, in fact, that she was given an honorary diploma from the school, even though she’d graduated high school in Littleton. 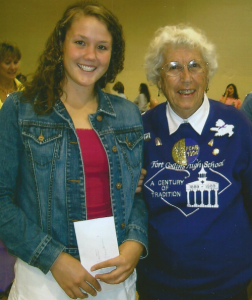 Liz received the Kiwanis Club “Community Builder of the Year” award in 1964. (Little did the Kiwanis folks know that Liz was just getting started at that point.) She was named the CSU Honor Alum of the year in 2000. And perhaps the most fitting “award” of all was the one bestowed by community members who referred to Stew and Liz as Mr. and Mrs. Fort Collins.

In 2008, after winning the fight against breast cancer twice, as well as a battle against Lymphoma, Liz died of other causes at the age of 86. She never slowed down even at that age. Her calendar was full for months to come at the time of her passing. 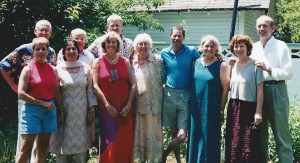 Stew has been honored by the city of Fort Collins with a park near Fort Collins High School that was named after him. Liz, however, despite all that she gave to this community, has never had anything more than a podium named in her honor. This woman gave heart and soul to the Fort Collins community. I will be writing to the city council today to encourage them to find a way to honor Liz Case. I’ll be cc’ing Michelle Provaznik, the executive director at the Gardens on Spring Creek, because Liz was an avid gardener and it might be fitting to honor her in some way related to the gardens. If you would like to send a note of support as well, you can write to cityleaders@fcgov.com to reach the city council members and mprovaznik@fcgov.com to reach Michelle Provaznik. Please encourage them to name a street, or a park, or some other bit of Fort Collins, in honor of Liz Case – our Mrs. Fort Collins. 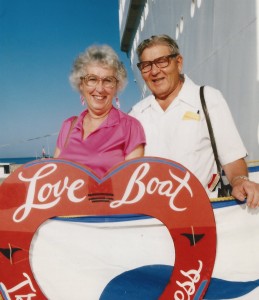 All photos and stories were provided by Liz’s daughters, Lizbeth Denkers and Laurie Warren.
Additional information about the probable use of barrage balloons in Seattle during the war came from HistoryLink.org.