Last week I took a dip into Fort Collins as reflected in the Coloradoan newspaper from March 6, 1959. The plan this week was to peer back to March 13, 1875. (I used a random number generator to come up with a list of which years to jump back to.) Unfortunately, the best laid plans of mice and Meg often go awry. (Apologies to Robert Burns and John Steinbeck.)

Although the process that would later be used to create microfilm was first invented in 1839, the city of Fort Collins didn’t commit its old newspapers to microfilm until September 27, 1966. At that point, many newspapers had been thrown away or lost. The Fort Collins Archive has no Fort Collins newspapers from 1875. But they do have a few from 1874, including three editions from the month of March (for the 11th, the 18th and the 25th). So this week’s “On this day in…” article will instead be an “In this month in…” post. 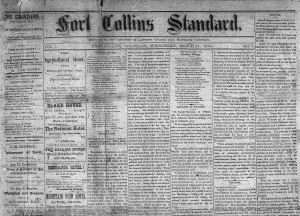 The newspapers of the 1800s were big on poetry, sermonizing, and advertising. They do not appear to have been as big on images or facts. The front page of each of the editions that I looked at included at least one, if not two poems as well as stories. One story was about “Deacon Barnes” and painted him in a distinctly arrogant light. The man was described as being so fixed on heaven that all of his earthly interactions were harsh and insensitive. Though the newspaper doesn’t indicate that the story is fictional, the moralistic tone and the fact that I can’t find an Ellen Barnes (the deacon’s wife) mentioned in any census data from that time period leads me to believe that the purpose of the story is simply to remind Fort Collins residents that they shouldn’t be “so heavenly minded that they’re no earthly good” (a saying first coined by Oliver Wendell Holmes, Sr.). 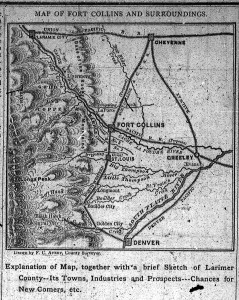 A large portion of the newspaper was spent on waxing eloquent about the benefits of living in Colorado. It was the best place to live in terms of health, had the best land for farming and dairying, was great for sheep, orchards, and overcoming consumption. Even the grass was more nutritious in Fort Collins that what your animals would eat if you pastured them almost anywhere else in America. (Or so these articles would lead you to believe.) The only two areas in which the author seemed to hedge revolved around the price of land (It depended on what improvements had been made upon it.) and the amount of rainfall (which he claimed to be 14 inches a year, significantly less than the 36 inches a year which he attributes to Ohio).

Those of you already familiar with Fort Collins history will note that Franklin Avery, the county surveyor, is listed prominently on the above advertisement.

There were only three churches listed in the newspaper and it looks like only one of them had weekly services. The pastors from the Methodist Episcopal Church and the Presbyterian Church had to share their pastor with other nearby churches.

Ads from the front page of the March 11, 1874 Fort Collins Standard

The first two columns of the Fort Collins Standard consisted of ads. When I first saw the upside down ad for E. Nagle, Wholesale & Retail Grocer, I assumed it must have been inverted by mistake. But then I saw the same ad in the other March papers and now I wonder if it was actually an advertising gimmick.

Stover is another well known name in Fort Collins.

And last but not least, an advertisement from City Drug, the oldest store in Fort Collins, currently located at 209 N. College.