The Milner-Schwarz House in Loveland

In 1866, a young woman by the name of Sarah Milner arrived in St. Louis (a small town that predated Loveland) to teach. The rest of her family joined her soon afterwards, moving up from along the St. Vrain river. Sarah’s father, Joseph Milner Sr., purchased 80 acres of land west of St. Louis. There he and his sons built a house out of native sandstone. Before his death in 1873, Joseph Sr. divided his property between his children, giving Joseph Jr., and his wife Emily, the westernmost section of land. There, a brick house was built that still stands today. 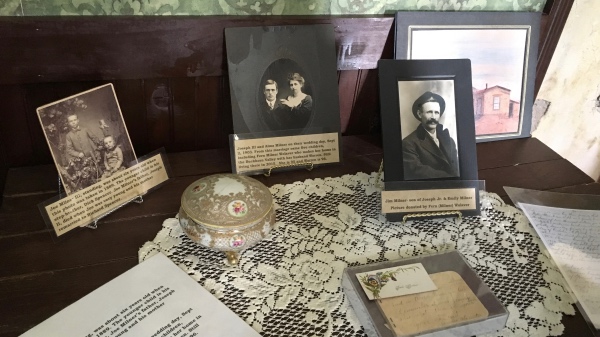 Photos of some of the Milner family.

Joseph Jr. died in 1878, leaving Emily a widow with four young children and another on the way. She sold off 20-acres of the property that year, but continued to live in the brick house. By 1880, she and her brother-in-law, James, who owned the rest of Joseph Sr’s original property, sold to a Mary Leedham.

Mary Leedham, in turn, sold the 60-acres of property to John Lapp in 1893 and from there it changed hands a few more times before William (Wilhelm) and Lizzie (Elisabeth) Schwarz purchased the house in 1906. The Schwarzes were German immigrants from Russia. They grew sugar beets and raised cows for milk and meat on the property which remained outside the city limits. 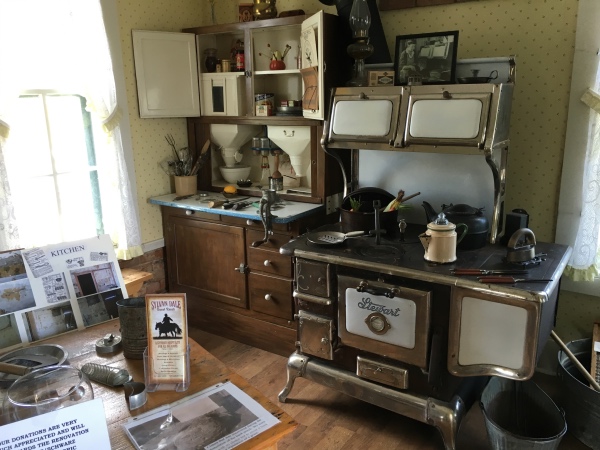 The recreated kitchen in the Milner-Schwarz house.

After forty years, the Schwarzes sold the farm to Thomas and Dora Newell. Thomas passed away in 1958 and Dora in 1962. The Newell’s children divided the property and sold most of it in 1970 to Larimer County to expand the fairgrounds. The brick building then came to be used as the caretakers house for the fairgrounds property. 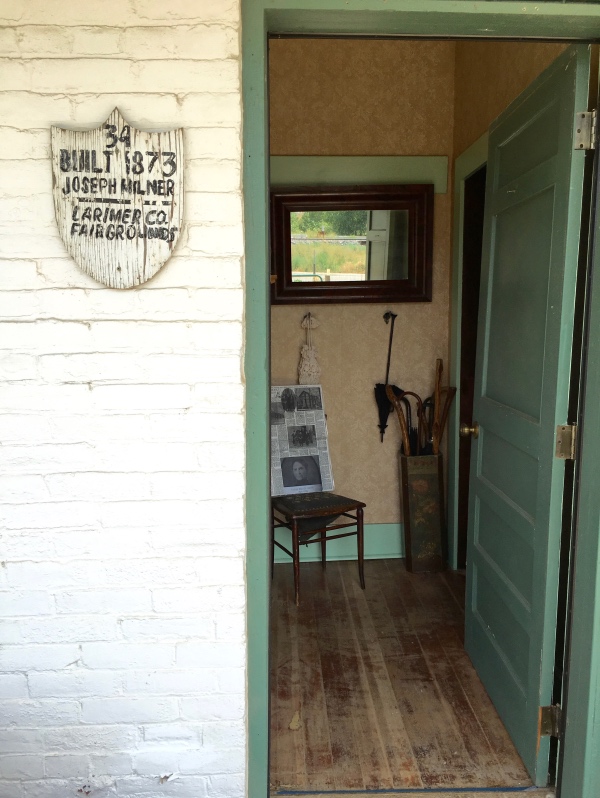 Entrance to the house.

In 2002, with the fairgrounds relocated to The Ranch, the area was redeveloped into a City park and the house was slated to be torn down to make way for a parking lot. The Loveland Historical Society rallied its members and fought to preserve this important piece of Larimer County history. In 2009, the City of Loveland was awarded a State Historical Fund grant for over $139,000 to rehabilitate the interior of the house and repair the foundation. The historical society, with the help of the Boy Scouts and other local organizations, has returned the house to it’s 1800s appearance as much as possible. 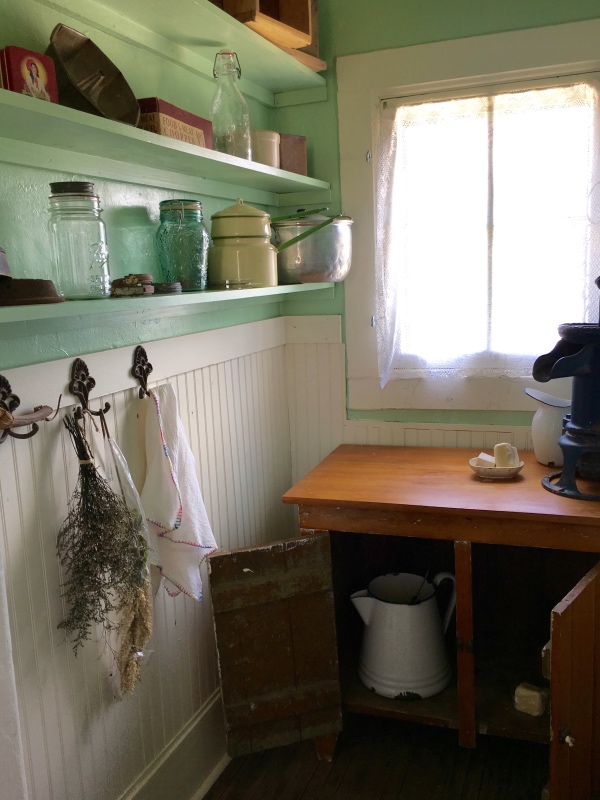 The dry sink currently located in the pantry of the house was original to the time of the Milners. Though it had traveled on with the family as they moved away, upon hearing that the house had been restored, the family sent it to the museum feeling that that is where it rightly belonged.

In addition to being important for its association with notable residents from the earliest history of Larimer County, the Milner-Schwarz house, located at 710 Railroad Avenue, is the oldest remaining brick residence. Though there were a few other brick houses in Fort Collins that were built before 1873, they were torn down in 1910 to make way for the Union Pacific railroad, leaving the Milner-Schwarz house as the oldest brick house still standing in the county. 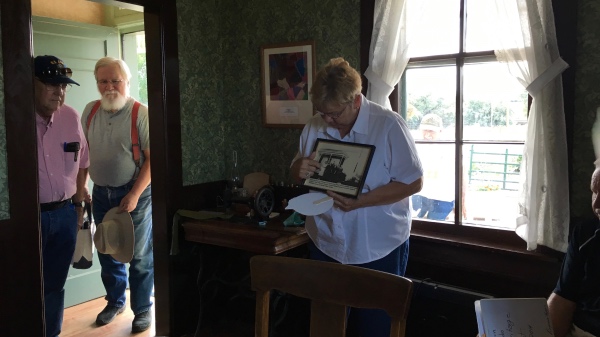 Tours of the house are now available through the Loveland Historical Society.

The 2013 floods swept through northern Colorado while the rehabilitation of the Milner-Schwarz house was taking place. The Big Thompson River rose and caused significant damage to properties all along the way. Forty seven homes were destroyed completely and another 338 houses required repairs. For many days during the flood, no one from the Historical Society was able to reach the Milner-Schwarz house to see if it had been affected. But when they were finally able to get through, they found that the water had come up to within 6 inches of the house, but because it’s located on a very small rise, it remained perfectly safe from the floodwaters. 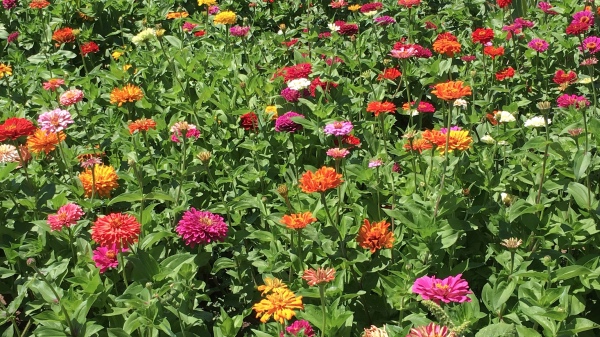 The house is now surrounded by beautiful gardens, making it a charming location for weddings or other special events.

In addition to being surrounded by beautiful, well maintained gardens, the Milner-Schwarz house also has a garden railroad, which is essentially a toy railroad set in the midst of the garden. Re-creations of several historic Loveland buildings have been built and laid out along dirt roads with the train passing by. 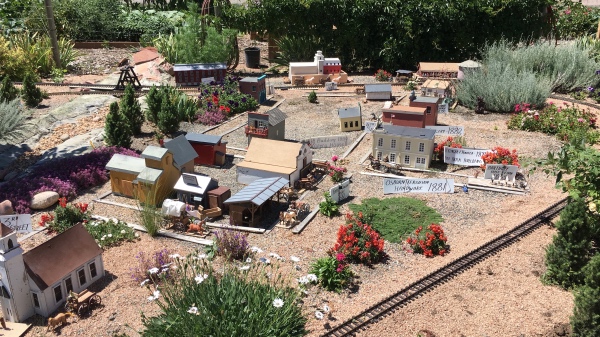 Loveland lays out in miniature with a small train line running past.

Other cities are recreated as well with a small Fort Collins, Eaton, Greeley, etc. so that the train can carry its little imaginary travelers from town to town. 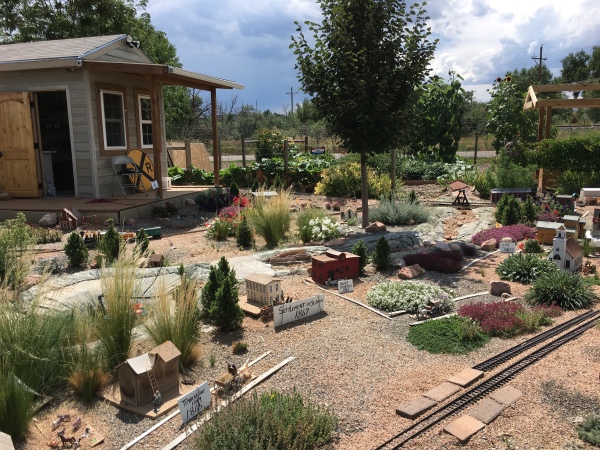 Other cities are placed around the miniature version of Loveland along the tracks so that the little people can go from town to town.

So far, most of the work on this little museum has been focused on the house and the surrounding garden areas. Period pieces have been added throughout the house, but items that were original to the Milners or Schwarzes are few. Hopefully over time, as the descendants of these families realize that the house has been turned into a museum, they’ll send more photos, and perhaps some furniture or other items as well, that will help add to the visitors experience by better filling out the stories of those who called this house a home. 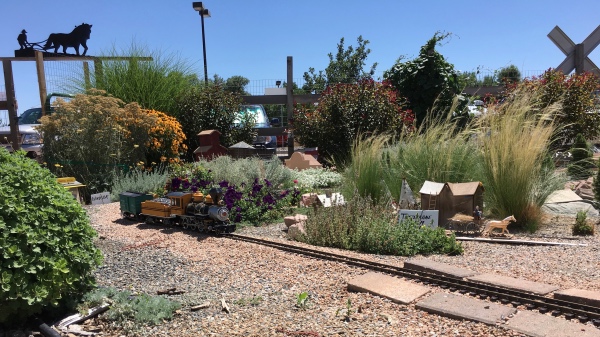 The museum is open to the public whenever the Old Fairgrounds Park Farmer’s Market is taking place. The property is available for small-venue rental events, such as weddings and receptions. For more info, visit the the Loveland Historical Society’s website.

Though I used the description of the history of the Milner-Schwarz property as found on the Loveland Historical Society’s website as the overall basis for this history here, I found a few errors or omissions there, which I’ve done my best to correct in this telling of the house’s story. The museum’s description only states that Joseph Milner Jr. died before the census date of June 3, 1880. But based on family records located on Ancestry.com, Joseph passed away in 1878. (After searching through numerous newspapers, I was unable to find any mention of how or when exactly he died. But this date does make sense of why Emily would have sold off half the property in that year.) Another item is the reference to Robert Newell as being the husband of Dora. In fact he was her son. I made this correction after finding information on the Newell family through Ancestry.com and Find a Grave. Robert’s obituary also confirms this fact. (In the historical society’s defense, the National Register of Historic Places Registration Form from which they probably based their history has the same mistake regarding the Newell’s and the same lack of information regarding Joseph Milner Jr’s death.)

Muley Park Landowners Association has a history of the Milners who had lived in the area.

Details on the flood of 2013 were found in “A paradise lost: Two years after Loveland’s flood,” by Craig Young of the Loveland Reporter-Herald.