Murder and Mirth: The Story of a Colorado Trial Lawyer (A Book Review)

Did you know that in the 1920s, the Ku Klux Klan was active in Fort Collins and even burned a few crosses around town? Fancher Sarchet mentions one such incident in his book, Murder and Mirth: the story of a Colorado Trial Lawyer. He also speaks of dalliances among men of otherwise noble stature in the community. He tells tails of bootlegging and whiskey running. And he gives his take on men and women of all classes of society in Fort Collins in the first half of the twentieth century and how he helped many of them through legal scrapes. With a dry whit and an insider’s eye to court cases spanning almost five decades, Sarchet draws the reader into the history of Fort Collins as seen through a lawyer’s eyes. 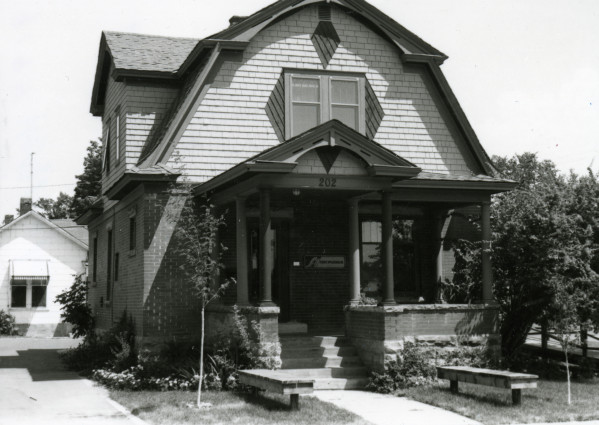 Sarchet moved to Boulder from Iowa in 1900, in order to study law at the University of Colorado. But he ended up in Denver instead, apprenticing under Judge E. A. Ballard. In 1906, Judge Ballard moved back to his old stomping grounds, Fort Collins. And by that fall, Fancher followed him. The first case he attended was held in a court located on the second story over the Poudre Valley National Bank (where City Drug was located for a long time and where RARE Italian restaurant is today).

Since Sarchet was new to the area, Judge Ballard suggested that he look into taking a room at the Lina Henry Boarding House at 202 W. Magnolia (shown above). In January of 1908, Fancher Sarchet married Nellie Herring (niece to Judge Garbutt, whose office was just next door to where Sarchet worked). 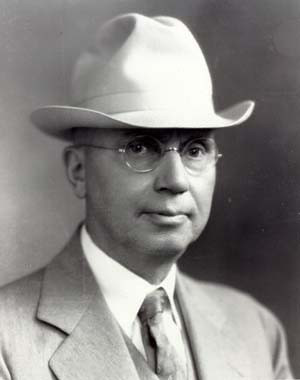 Fancher Sarchet in the days before he’d lost an eye in Fort Collins first drive by shooting.
(Photo from the Fort Collins Archive – H10067.)

Sarchet became fast friends with Russell Fleming and Ed Foster and the three of them were known as the Three Musketeers. The men were drinking buddies and pranksters. Together they’d sneak up to the attic of the county courthouse where confiscated whiskey was stored. (Remember, Fort Collins was a dry town from the late 1800s until 1969. It was illegal to possess liquor, so the sheriff would confiscate anything he found.) There they’d snag not just any old whiskey, but they specifically looked for the good stuff — Old Crow whiskey.

The book, Murder and Mirth, was published in 1958, at which point Sarchet was seventy seven years old. It’s clear that he had pulled out old journals, notebooks, and ledgers to refresh his memory and many of his tales read very much as reminiscences shared in front of the fireplace over a whiskey and soda with old notes piled up around.

There were several times, while reading, where I giggled, gasped, or even laughed out loud. One of my favorite stories was one which Ed Foster used in a weekly column that he wrote for the Fort Collins Review. Here is the story as Sarchet writes it in his book,

On a bleak December day not too many years after Mr. Foster launched his career as a columnist, he and Mr. Fleming were at a lodge club on Linden Street in Fort Collins drinking beer. [Low alcohol beers were still allowed under the alcohol laws in the city.] A terrific snow storm was raging. About midnight Ed and Russell left the club for their homes. They made their way through two feet of snow for a block from the club to College and Mountain Avenue, then another block south on College to Oak Street; then they floundered through the snow west on Oak three blocks, which brought the directly across the street from Russell’s home. Here, for the twentieth time, they stopped for a breather.

When Russell caught his breath and could speak, he exclaimed, “My God, we are never going to make it, we will have to go back to the club.”

There were several interesting cases having to do with adultery, divorce, or statutory rape. In cases where the woman was pregnant, all parties seemed to generally agree that a shotgun wedding was the most appropriate course of action, though sometimes legal complaints were made in order to force the couple into a decision.

But in the case of adultery, Sarchet explained that the law in the west was somewhat nuanced. He writes,

In the effete East many of our states, New York for example, have laws declaring adultery to be a felony, while in the virile West it is looked upon more as a sport. In New York the only cause for divorce is adultery, yet all New Yorkers desiring divorce go to Nevada. So, obviously, adultery seldom occurs in New York. Regardless of the verity or the lack of verity of the foregoing observations, in Colorado adultery is not a crime, not even a misdemeanor. There is, however, a statue making it a misdemeanor punishable by fine or jail sentence, for a man and woman to live together “in an open and notorious state of adultery.”

So in one case that came before Sarchet, a husband (an Italian named Tonie) came to him to file a complaint against his wife, Christine, who had run away with his most trusted employee, Mike (a Greek). Mike and Christine were thrown into jail and it was found that neither could afford bail. A protracted conversation ensued regarding whether Christine should be allowed to go home to her children, or if she should remain in jail. At this point her husband, Tonie, arrived and, hearing the conversation, became very agitated. He paced back and forth and finally burst out,

If a da Mike hada come to da house to seea da Christine Once in a while, it woulda be alrighta; but he steal her away and I loosa my godadama cooka–Jesus Christ!

At that point a promise was extracted from Christine to never run away with another man and she joyfully rejoined her husband and children. 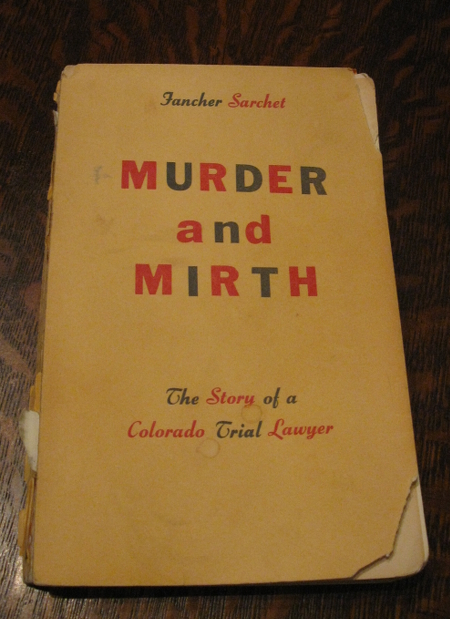 There are many, many more stories that are well worth reading in this memoir. Although used copies of the book are available online, they tend to lean towards being a bit expensive. But our local library has a copy (that I’ll be returning soon). If you’re looking for something a little different to read this summer, I’d encourage you to check out Fancher Sarchet’s book, Murder and Mirth.

Reading Sarchet’s book was #5 on my Summer Bucket List. My next goal is to take a ride on the trolley (which is free for dad’s this upcoming Sunday — Father’s Day).