Motorists Asked Not to Rob Cars 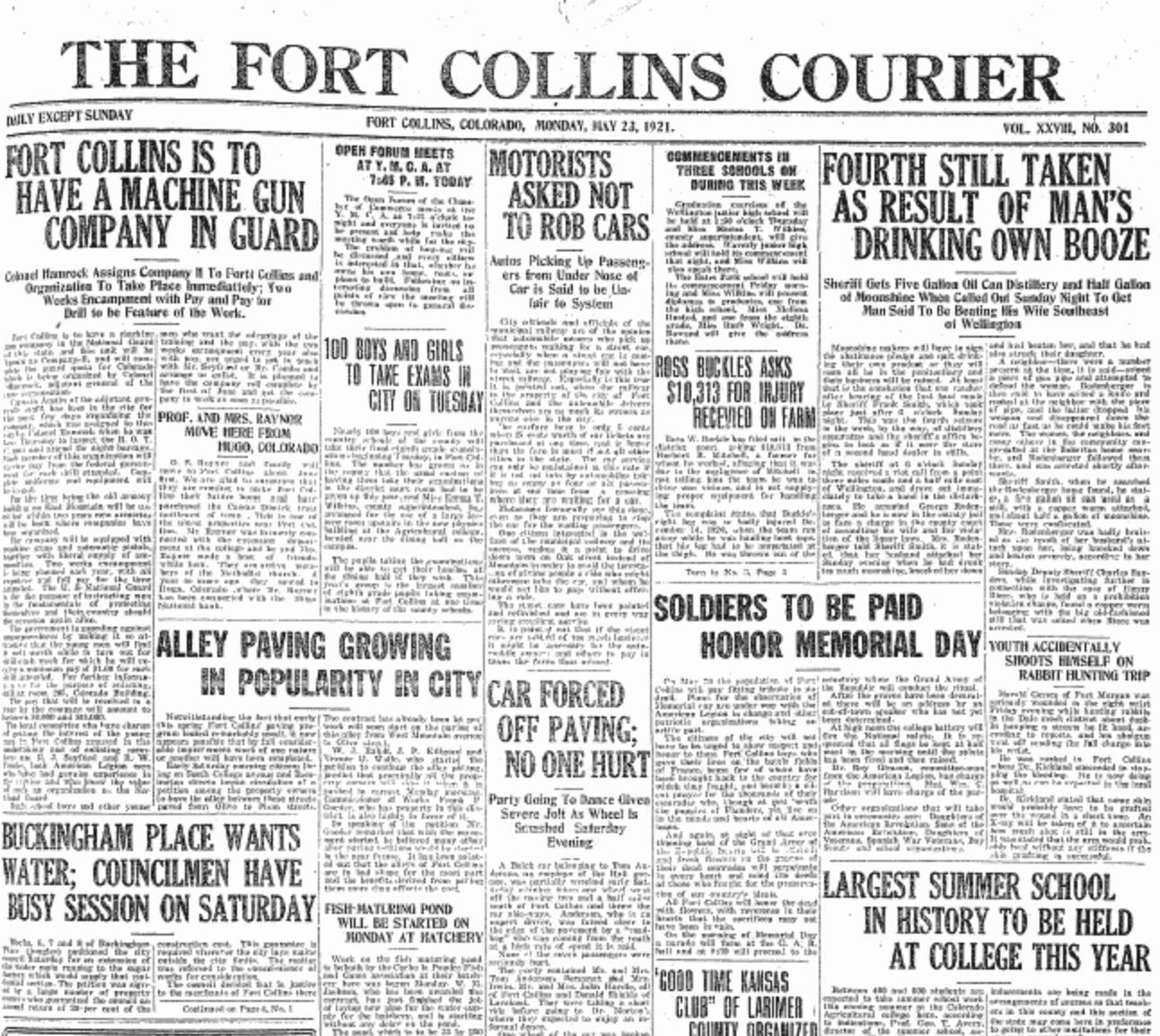 The front page of the May 23, 1921 Fort Collins Courier reflected an increased interest in local news.

The first headline to catch my attention in this week’s news-in-review post was not one of the ones with big bold print, but rather the one with the craziest title, “Motorists Asked Not to Rob Cars.” Huh? Of all the descriptions I’ve ever heard used of robbers, “motorists” is not one of them. But once I read the article, it all became clear.

Apparently folks in automobiles would drive down W. Mountain Ave. and see crowds of people waiting to ride the trolley car. Even when the trolley was in site, and  the people wouldn’t have long to wait, the motorists were still picking them up and driving them downtown, which meant that the trolley system was losing out on those passengers’ fares. The article pleads with motorists to either stop picking up passengers or pay extra taxes to make up for the city’s shortfall. One helpful suggestion offered by the author of the article is to take Oak Street, rather than Mountain, to avoid the temptation of picking up passengers. 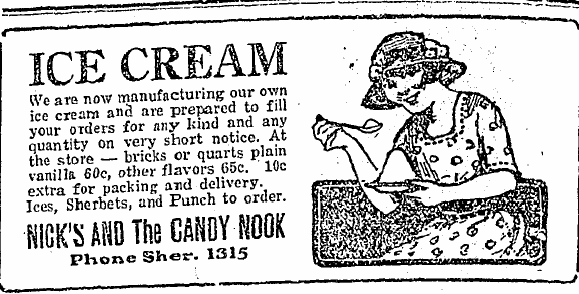 Old ads often include a phone number, but no address.
The town was so small everyone probably knew where the store was already.

In other news, the idea of paving the alley between College and Remington, from Olive to Plum, was growing in popularity among residents along those streets. The folks living in the Buckingham neighborhood petitioned the city council to run a water main to their neighborhood so they could have running water. The sheriff had made his fourth seizure in one week of distillery equipment after being called out to deal with a man who had gotten drunk and was beating up his wife. Between 400 and 500 students were expected to take summer school classes at the Colorado Agricultural College, which was a record number. A camping area was going to be set up for students that wanted to sleep outside in tents. And a Buick belonging to Tom Anderson was forced off the road when a “road hog” came speeding towards him just 2 1/2 miles south of town. 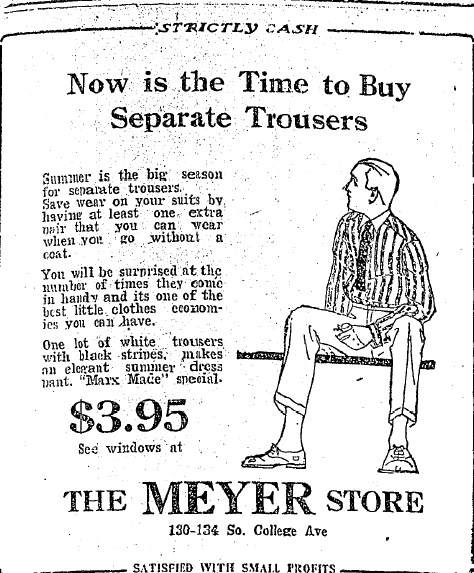 You might be scratching your head and wondering “What are separate trousers?” The ad is encouraging people to buy just pants, as opposed to pants with a suit coat. (This was one of the few ads with an address attached.)

Prairie dogs were being exterminated in Livermore. Waverly and Wellington were planning to start doing the same to the pests in their towns. And Catherine Gettman was caught speeding “briskly” down West Mountain. Her brother paid her fine of $5. 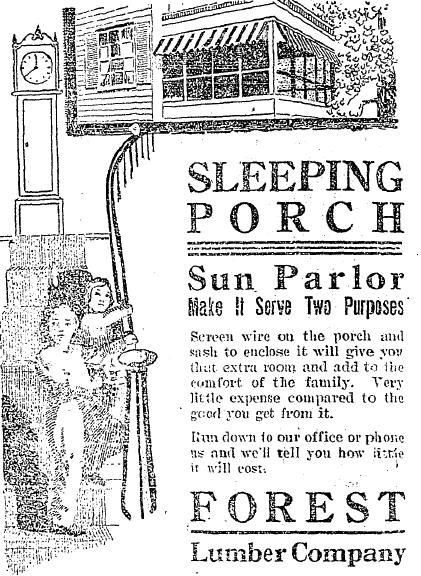 By enclosing a porch you could add space to your house at a minimal cost.

The Great Western Sugar Company posted an alert to beet growers that an alfalfa webworm might cross fields and damage their beet crops. Farmers were encouraged to be on the lookout for worms, to built a ditch filled with water between alfalfa and beet fields, and to have their sprayers at the ready.

Nowadays we just call it the (get your arms ready to do the motions) Y. M. C. A.

There was a long, long article on page 5 of all of the benefits of Prohibition with a statement from every almost every state in the Union regarding the beneficial nature of the eighteenth amendment. It was touted as being the greatest piece of legislation in the history of America. 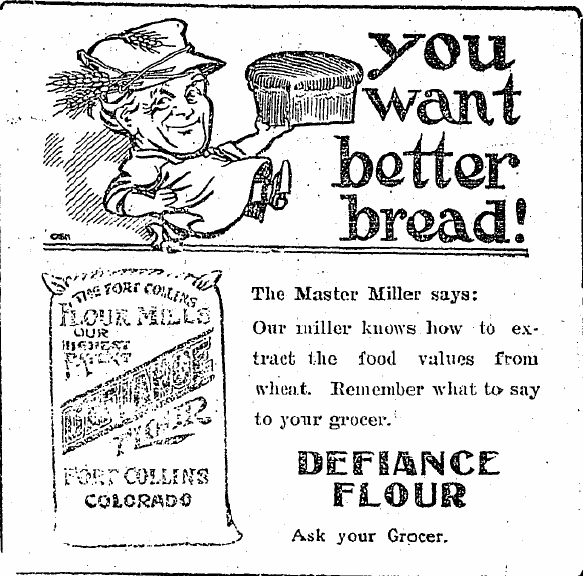 Defiance flour was touted as being the best that money could buy. The company chemists were continually improving the formula of the product.

In sports news, the Loveland baseball team walloped the American Legion “once again.” The Woodmen of the World (baseball) team defeated the Vocational team at Terry Lake Park. And dates for the Rocky Mountain (Horse) Racing Circuit had been set. 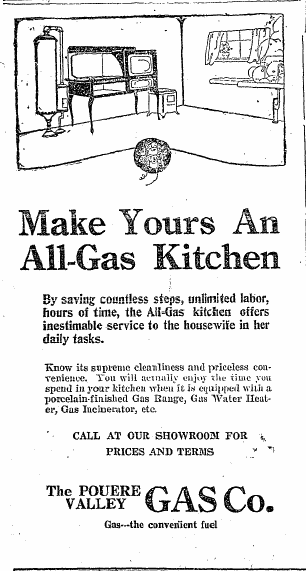 Look at those modern conveniences that could be yours if you went to an all gas kitchen!

The Fort Collins Coloradoan, 23 May 1921. I accessed this newspaper through Colorado Historic Newspapers.