What New Neighborhoods Tell Us About Our Hopes and Dreams 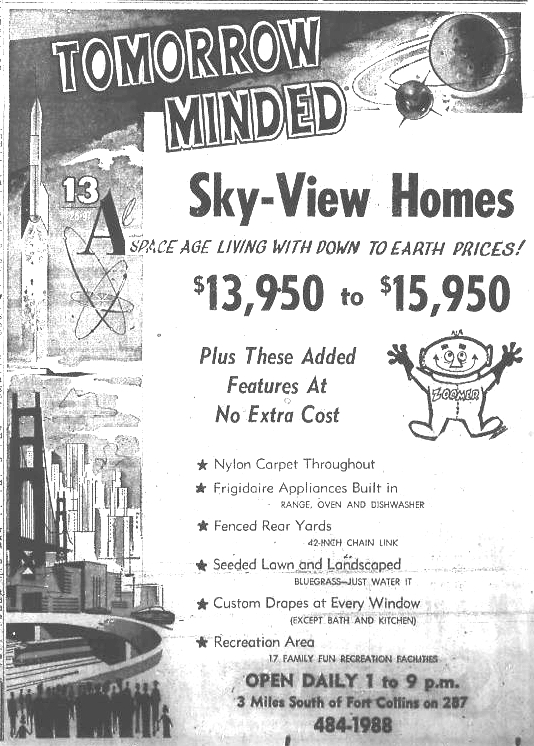 In January of 1959, the Soviet spaceship, Luna 1, was the first to reach the surface of the moon. The following March, the U. S. spaceship, Pioneer 4 sailed past the moon without quite making contact. The Cold War was on and space was our “Final Frontier.”

The technological race between countries spilled over into the cultural realm as well with shows like The Jetsons (1962 – 1987) and Star Trek (1966 – 1969 and rolling into syndication thereafter). Even the James Bond series, which started in 1962, though not in the realm of science fiction, still showed a love of scientific gadgets and technologies. 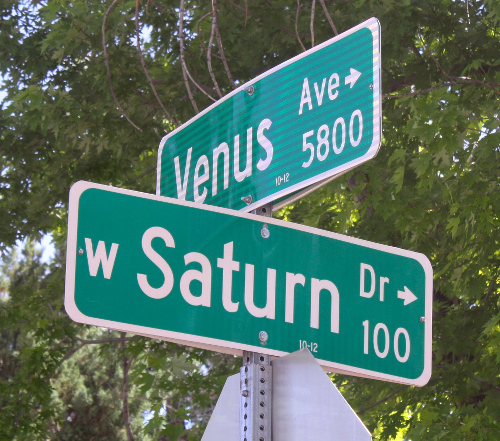 This sense that science was going to take us somewhere exciting and new is reflected in the advertisement above for the Skyview neighborhood. You’ll note that there’s not a single drawing of what one of these Sky-view homes will look like. Instead, there’s planets, rockets, nuclear particles, and a large urban city that people were flocking to. (I can only imagine that the size of the buildings and bridges was another nod to technological advances.) 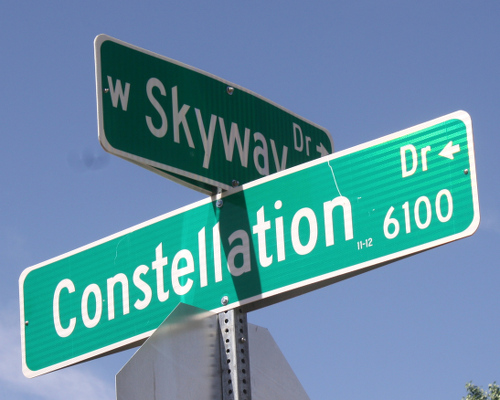 Note the added amenities listed in the ad: nylon carpet, built in appliances (both leaning in the direction of exciting scientific improvements), fenced yards with bluegrass and a recreation area (indicating this was a great neighborhood for families), and custom drapes (just in case mom wasn’t convinced yet).

To add to the space-aged excitement, the streets were given names like Mars, Neptune, Uranus (I wonder if houses are harder to sell on Uranus….), Galaxy Way, Milky Way, Orbit Way, Polaris, Lunar Court, etc. 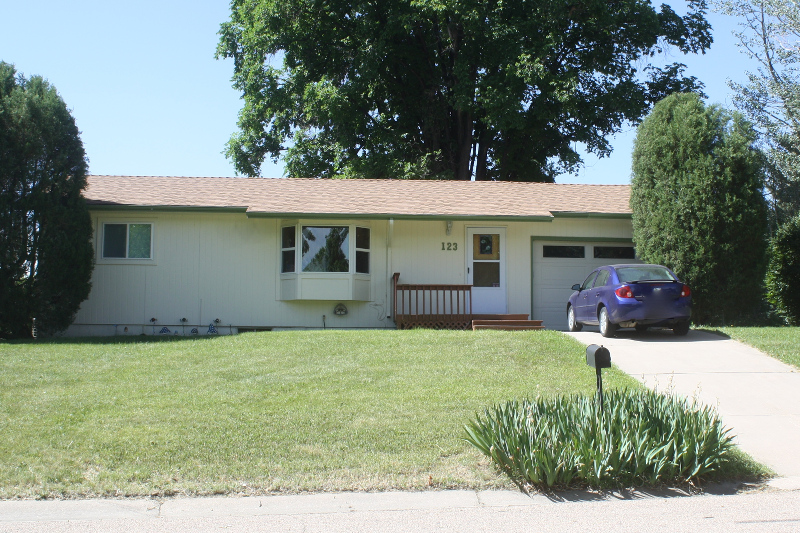 Many of the homes in the Skyview neighborhood are simple, ranch-style buildings.

According to folks that grew up in the neighborhood, special loans were available that helped families on a budget afford the already pretty reasonably priced homes. (I’ve come across references in local historic literature indicating that there were special programs to make housing more affordable in and around town in almost every decade. The deals tended to be in specific neighborhoods and the offers were often run through the developers.) 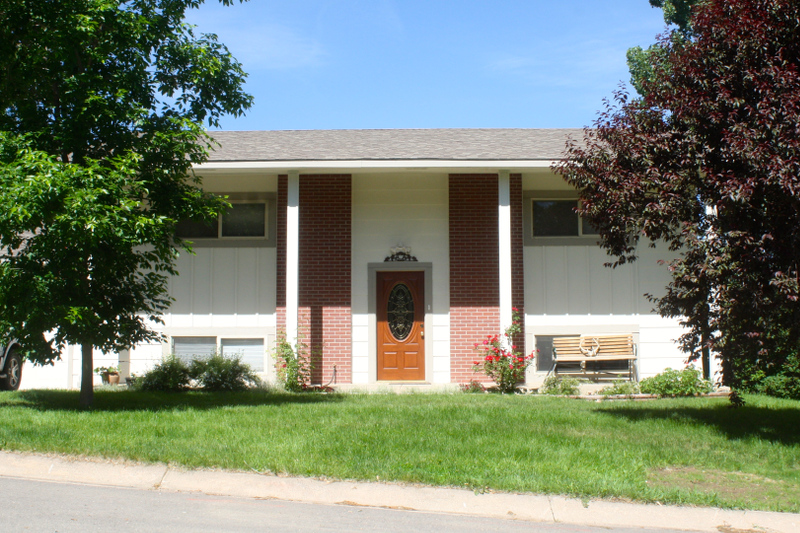 There are also split-level houses and two-story houses in the neighborhood.

Unlike housing developments today, the neighborhood didn’t spring up all at once. The first homes were built in 1965 and it seems that most of the houses were built in the 60s and 70s, but in searching through the county assessors files, it’s possible to find houses built in every single decade since then as well.

The “17 Family Fun Recreation Facilities” that are mentioned in the ad never materialized. One resident told me that a pool and several other amenities had been planned, but that a dispute between a couple of builders put the kabosh on all of that. There was a swing-set put in between the neighborhood and the train tracks, but the most commonly enjoyed “amenities” appears to have been a field, two small caves in the side of a rock, the ditch, the train tracks, Fossil Creek, Hickory House South, Almans Deli Works, and sneaking over to Farmer Tom’s property to pet the horses. Kids traveled to Recycled Cycles, the mall, and even all the way up to Rollerland by bicycle. 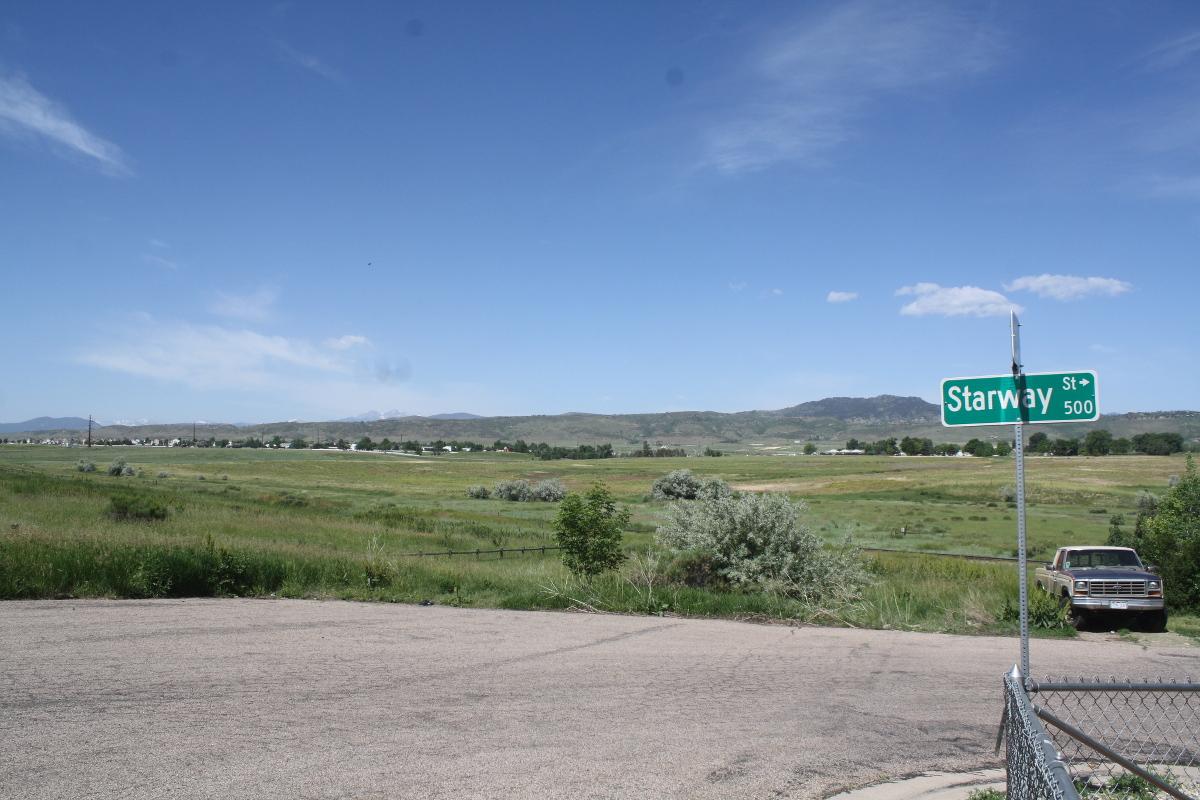 The intersection of Starway and Skeyway opens out into a beautiful view of mountains, fields, farms, and the train line.

Another shot of the beautiful view behind the neighborhood.

When the neighborhood was first built, kids had to travel all the way north to Bennet Elementary, Blevins Junior High and Fort Collins High School (which was not in its current location on Timberline, but all the way up by the CSU campus). 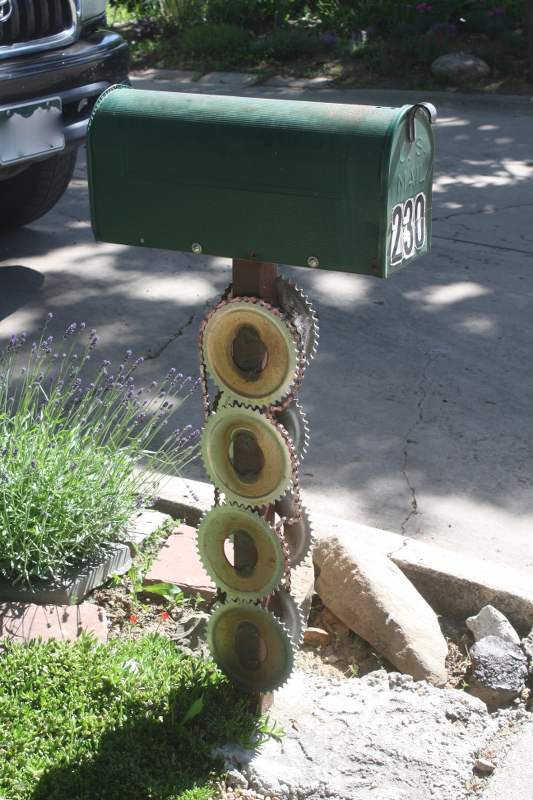 Creative mailbox in the Sky-view neighborhood.

While investigating the neighborhood this week, I made a couple of delightful discoveries.

Anyone that’s looked over my North of Prospect blog will know that I enjoy a spiffed up mail box. So I was delighted to come across this geared-up example during my exploration of Sky-view. 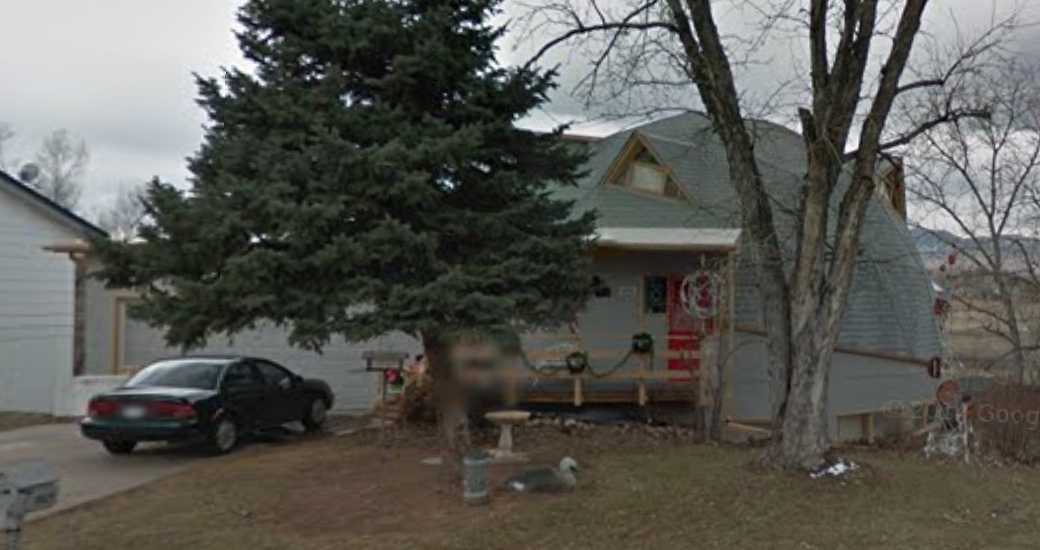 Dome Home in Skyview (Photo thanks to Google Streetview.)

I also discovered a dome home that is utterly unlike any other house in the subdivision. Built by hand in 1968, this house is a kit home that was brought in from California. The back of the house has large windows that give beautiful views of the mountains, fields and train behind the development. At one point the roof tiles were yellow and the house could be easily spotted from distant hills. 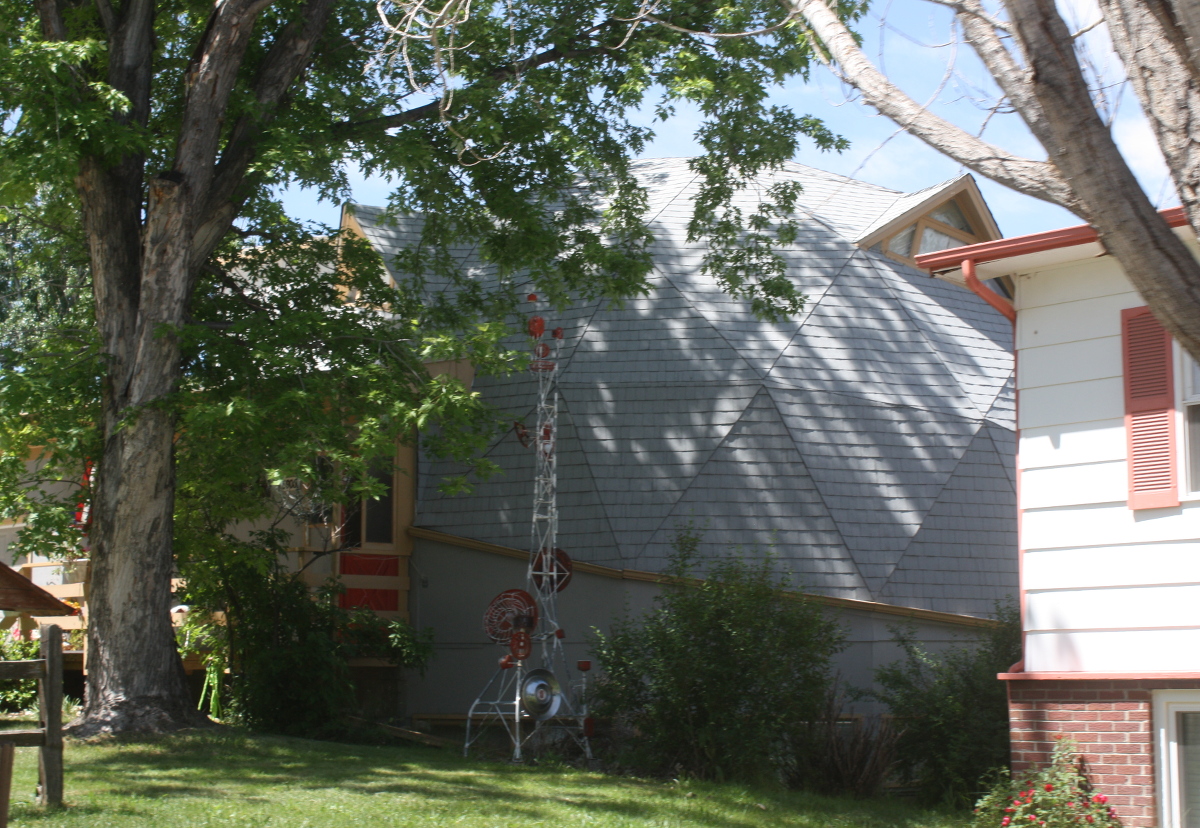 When the dome house was built, no bank was willing to loan the couple money because of the unusual design. The couple found a way and built it themselves. Ahead of their time, they even included solar panels on the south side.

When I first came across the advertisement for Sky-view homes in an old copy of the Coloradoan, references to space (and the silly little robot) really jumped out at me. I thought it was a very odd connection to make with a new housing development. But the more I thought about the interaction between contemporary culture and advertising, the more it dawned on me that we do still do things like this today. In fact, I’d venture to say that we’ve taken interrelationship between culture and housing to a whole new level. I think that the Bucking Horse subdivision (at Timberline and Drake) is a fantastic example. 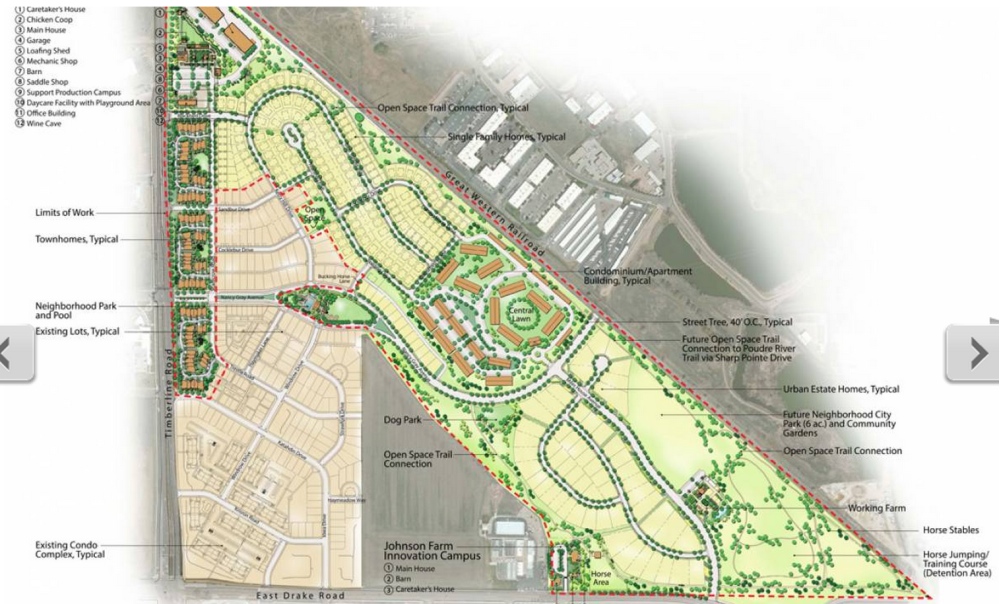 The overview of the Bucking Horse subdivision includes parks, a pool, bike trails (and connections to city trails), a working farm, an artisanal village and several other amenities.

This housing development is centered around an idea — a cultural lynchpin, if you will. Living a healthy lifestyle is increasingly at the forefront of people’s minds. Colorado, and especially Fort Collins, have always drawn people who love the outdoors and active lifestyles. But increasingly bicycling, walking, eating home grown or locally sourced food, and raising kids with access to safe, outdoor areas to explore and adventure in, are all growing in importance. There’s a sense of getting back to basics, valuing hand-crafted-items over those produced on an assembly line. Community and connectedness are important not just to families, but to singles, young couples, and retirees as well. 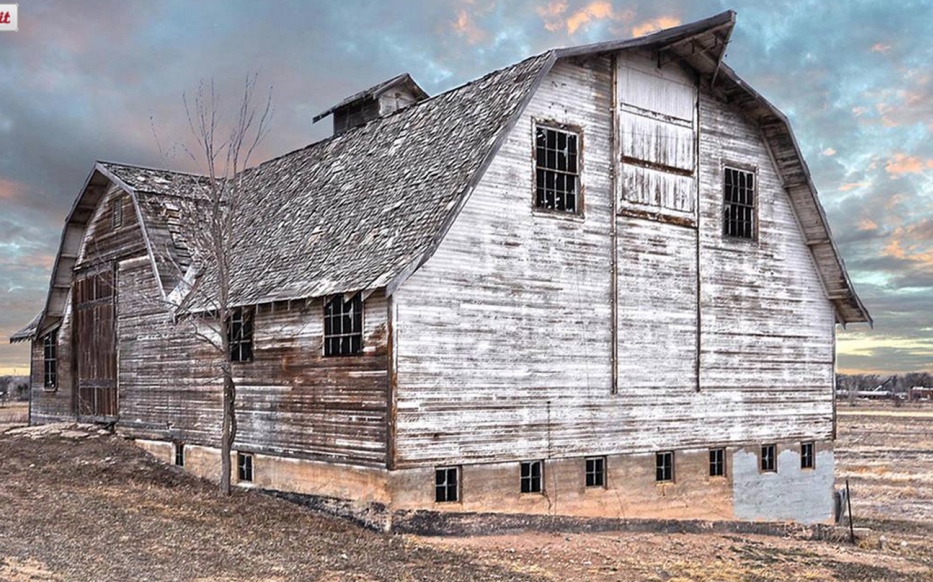 When the folks at Bellisimo envisioned this project, they followed five guiding principals: community, environment, education, health and economics. The layout of the development, as well as the amenities included (pools, parks, classes, the Artisan Village, etc.), encourage community building between neighbors as well as between residents and local vendors. A trail system, outdoor horse arena, parks and gardens provide residents with quick and easy access to nature. And the preservation of historic farm buildings is a sustainable building solution (which I’ll be writing more about in July). The onsite farm will provide educational opportunities for children. In addition to trails and gardens, which encourage a healthy lifestyle, the developer is seeking health-related retailers to move into the Jessup Farm Artisan Village such as a bike shop, yoga studio, and a farm-to-table restaurant.  And, in an effort to create a socio-economically diverse community, the development will include a wide range of housing types: single family homes, townhomes, apartments, patio homes, and urban estates (single-family homes on larger blocks of land).

In comparing the advertising to what I see today in the Skyview neighborhood, the sci-fi aspects really boil down to street names and nylon carpeting. The Bucking Horse project is much more ambitious in how it aims to tie together cultural values and residential living. Buying a house, or moving into a new neighborhood, is often bound hand in glove with dreaming new dreams and envisioning a better future for ourselves. Whether we hope that science and brave new frontiers will provide that, or we rely more upon safe and healthy communities, we want to live in places where we feel we can fulfill our dreams.

I look forward to seeing how Bucking Horse develops. If you would like to find out more about this project, I’d encourage you to check out the Bellisimo website. And if you lived, or live, in the Skyview neighborhood, I’d love to hear your stories of growing up (or raising kids) in the neighborhood as well as other stories or reminiscences.

Skyview has been outside of Fort Collins proper until just a few years ago. But its proximity to town still binds its history to that of Fort Collins.

Bellisimo is the developer and one of the builders in the Bucking Horse neighborhood, but other builders involved include D. R. Horton, Hupp Construction, and Bartran Generations of Homes.

The advertisement from the 1964 Coloradoan was found on microfilm at the Archive at FCMoD.

A lot of little details about where kids in the Skyview neighborhood went to school and hung out came from folks in the “You know you grew up in Fort Collins, CO if you remember…” group on Facebook. Thank you all so much! I loved hearing all your stories and reminiscences. Keep’em coming!

All images related to Bucking Horse were taken with permission from the Bellisimo website as was some of the information on the project. I also spoke with Steven Sorensen of Bellisimo. Thanks for your help, Steven!