Norman Fry was only 17 when he came over from England to learn ranching from Eustace Dixon and Reginald De Rivas at their ranch in the Poudre canyon. His parents had paid $100 for six months of hands-on training. So when Norman arrived in 1889 after a long trip over land and sea, he was surprised to realize that Dixon and De Rivas knew next to nothing about ranching. They spent most of their time playing cards and drinking with other Englishmen in the area.

Though Norman did learn a bit about ranching, it was mostly on his own — through trial and error. He also helped out a bit at the Elkhorn Mine and earned a bit of money from John McNabb by chopping firewood. In April of 1890, he went to work for John Zimmerman who had opened a small guest resort. (This was before the Zimmermans had built the Keystone Hotel.) He worked from dawn to dusk and earned $15/month. He describes that time in his book Cache La Poudre: “The River”:

I milked ten cows, morning and evening, helped around the Water Power Saw Mill, hauled lumber from this Mill to the Stamp Mill at “Poudre City,” and raised five tons of potatoes by hand while resting. Mrs. Zimmerman used to make several hundred pounds of cheese, and we helped with that too. During the “Tourist Season”, I washed the dishes in the evening, and cleaned all of the fish caught during the day by the guests.

Eventually he went to work for the La Fevers, Sarah Barnes, and Dave Quigley for several years. He was a ranch hand during that time. Mr. Le Fever took Norman to task for not having saved up any money from his previous earnings. So together they determined a good spot for homesteading and starting a herd. La Fever offered to sell heifers to Norman at $15 a head. So with the help of some Aunties in England, Norman was able to start a small herd of his own. He also managed to file a claim for the land in Sheep Gulch. (It’s a marvelous story of intrigue and well worth reading Norman Fry’s personal account in Cache La Poudre: “The River.”)

Norman also took up mail delivery during this time. He’d head up to Chambers Lake in the evening. Then he’d travel down to Home (which is what the Zimmermans property was called), Pinehurst (where he’d change out his horses), and Manhattan. Then he’d head back up to Home and back down to his own home. (He was staying at Pinehurst in Sheep Gulch at the time.) It was a 47 mile back and forth trip.

In 1898, Norman met his future wife, Maude Berger. She had been visiting her aunt, Mrs. La Fever. Since she lived in Denver, Norman and Maude’s six year courtship included weekly letters and an annual visit in Denver. 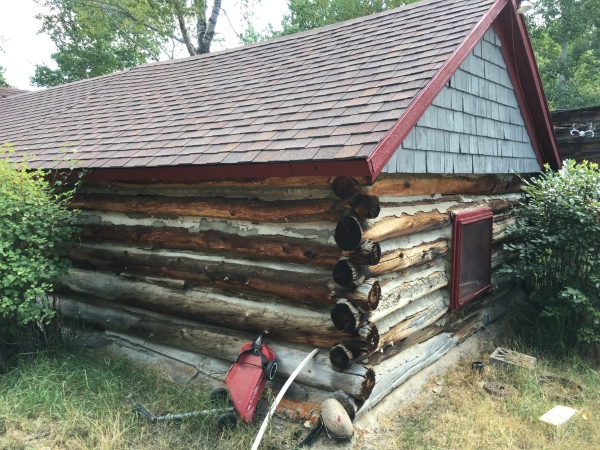 The original cabin at Twin Pines. This sits behind the rest of the house. 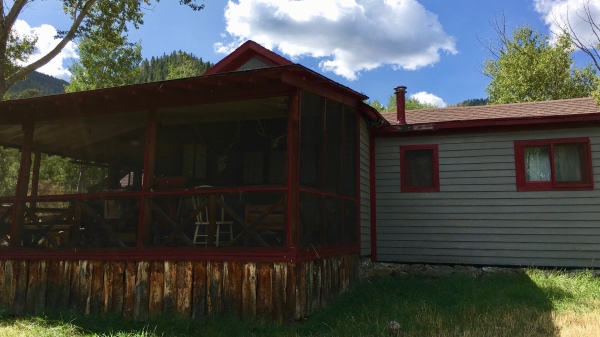 The front room and porch at Twin Pines.

In 1899, Norman finally began to build a house of his own. He added a front room and large porch a couple years later. He and Maude were married in September 1904 in Denver. They had two daughters, Richenda (Betty) born in 1909 and Audree born in 1915.

During this time, Norman delivered beef to nearby ditch companies, was the rodman for some surveying work along the river, and did some data collection for the U. S. Geological Survey. He also oversaw improvements to the road down Pingree hill which had a drop of 1,100 feet in 2 1/2 miles. A barrel curve was added to the road which Norman claims saved many a radiator. Convicts were used to improve the roads. There was only one rifle kept in the camp and that was only used for hunting rabbits. The men took great pride in their work and there was never any trouble with anyone running off.

Maude was a city girl and was a bit afraid of wild animals and other possible dangers in the wild mountain land. So when Norman was off the property, she remained safely inside the house. Until one day when she looked out the window and saw that one of their barns was on fire! She ran out to put out the fire and from that day on she wasn’t afraid to be out of the house while her husband was away. 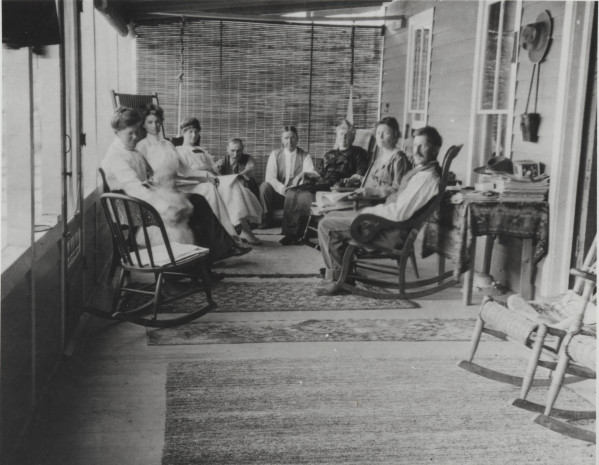 There are several buildings still standing at Twin Pines in addition to the house. 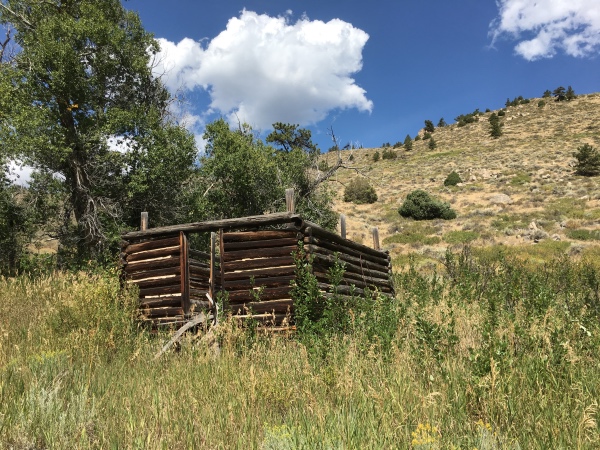 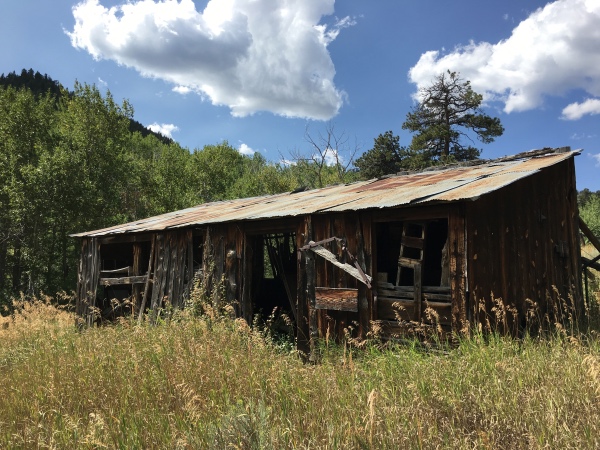 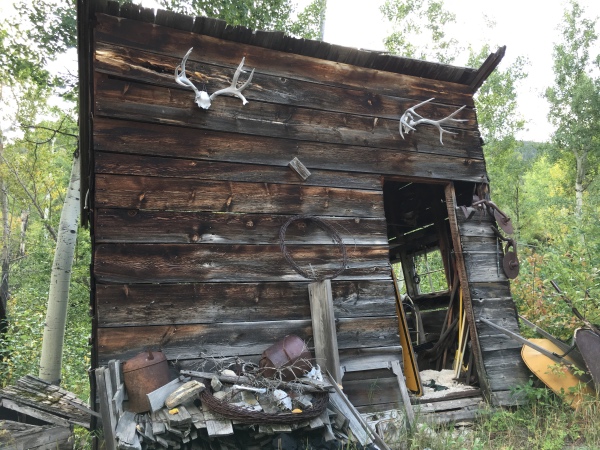 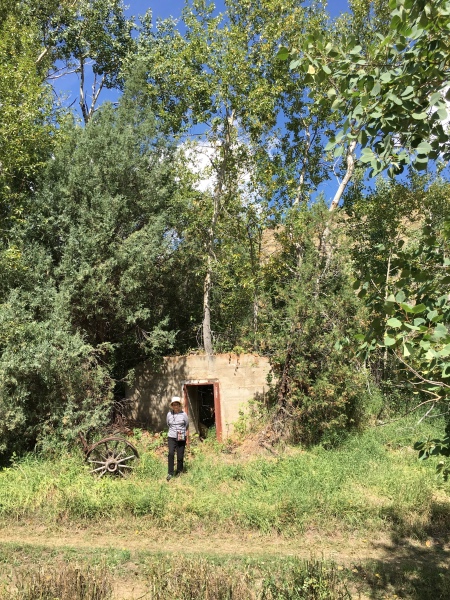 When Richenda was old enough to go to school, the family sold the property and moved to Denver. Norman retained ownership of a small part of the original ranch in the hope that they would be able to move back one day — which they did.

The family came back to visit the property in the summers and Norman continued to work in the mountains (all along the Front Range). They also spent a year in California and visited Arizona for awhile during the twenties.

They eventually moved back to the remainder of their original ranch property. There they had built a home and several outbuildings. They named the place Fairkytes after his grandfather’s property in England. 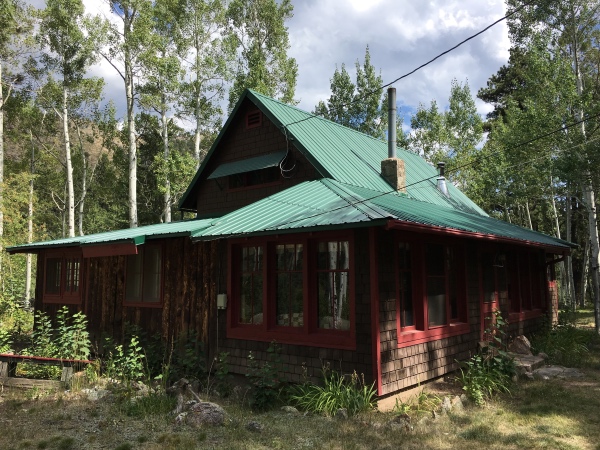 Maude loved to paint and added decorations throughout their cozy home at Fairkytes. 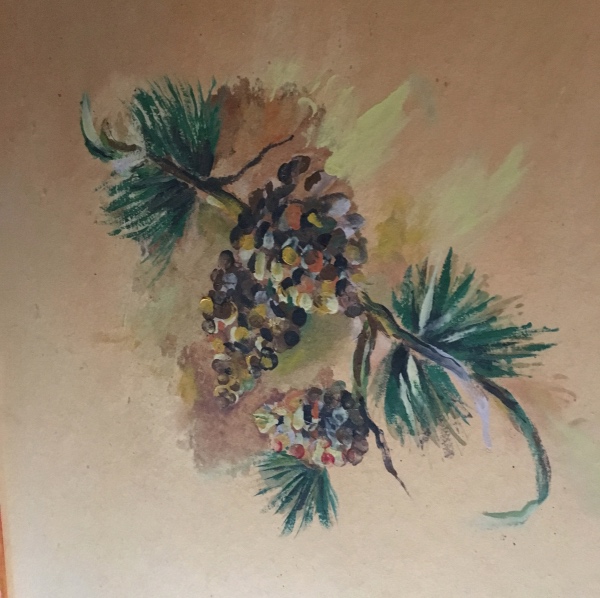 There were water stains on the paper in the ceiling in one room, so Maude added some paint to hide the stains. 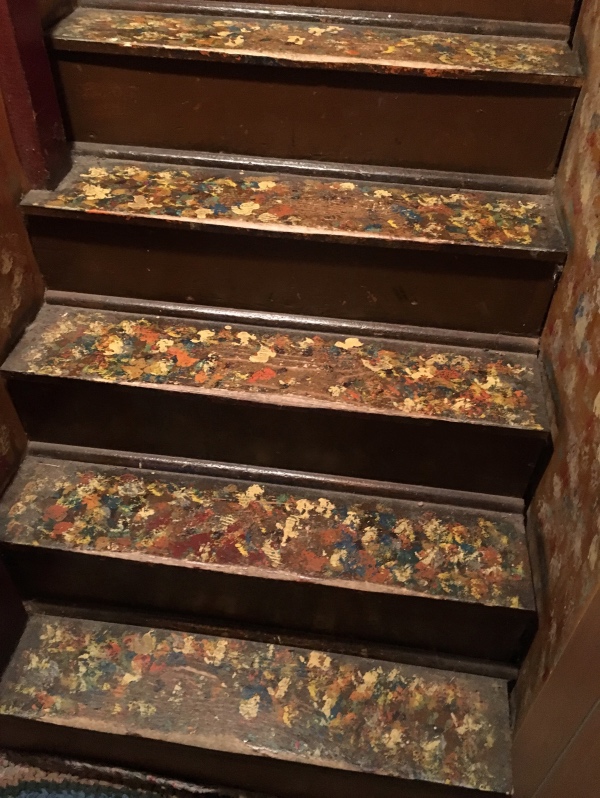 Maude added some decoration to the stairs. 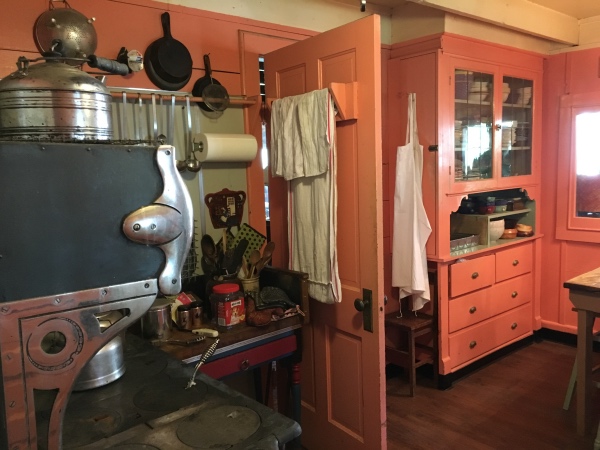 The kitchen at Fairkytes appears to look much today like it must have back when Norman and Maude were here. 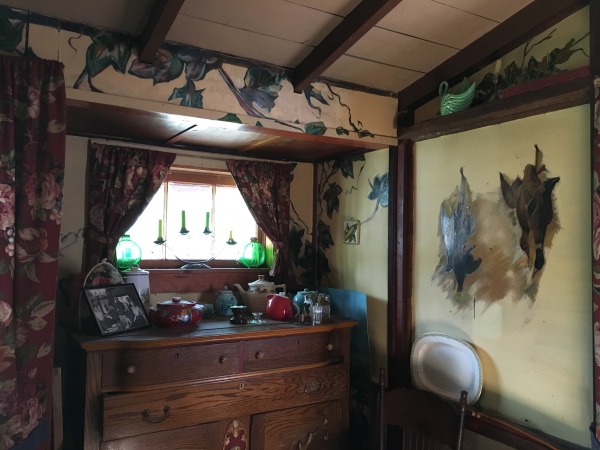 More paintings adorn the walls in a nook in the dining room. 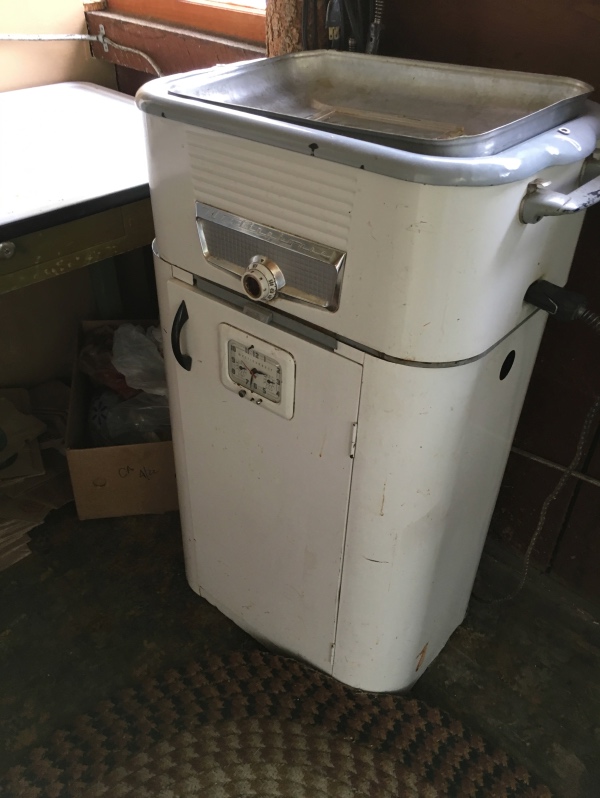 Original furniture and appliances remain throughout the property. 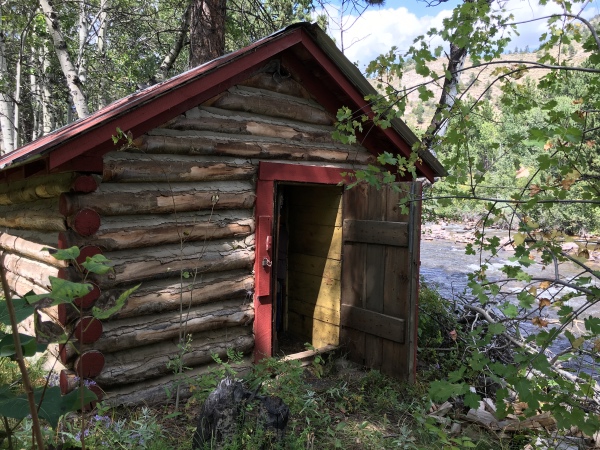 Cabin along the river. 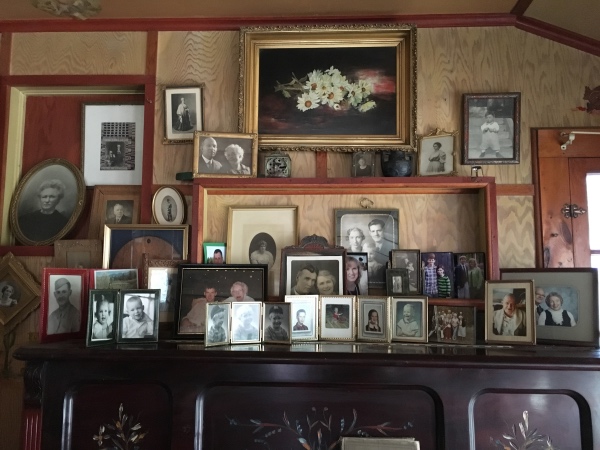 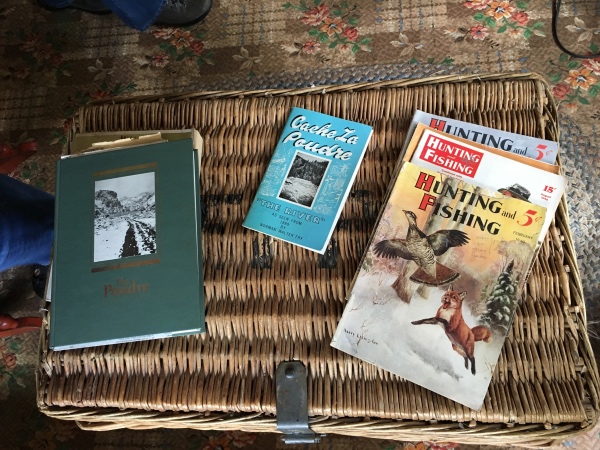 Norman Fry’s book is at center. 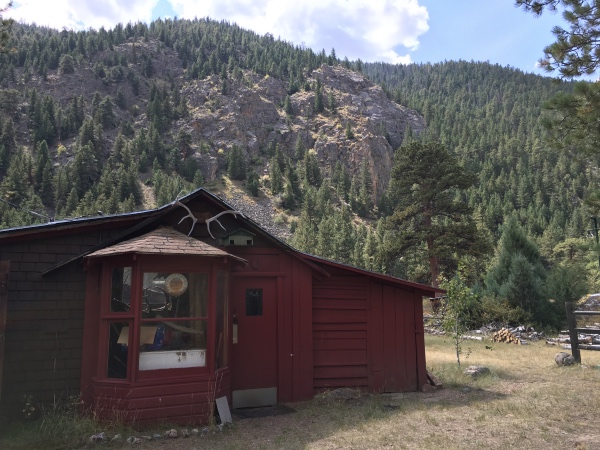 An outbuilding and a view.

On April 21, 1944, Maude had a stroke and passed away. Norman continued to live at Fairkytes and in 1948 he remarried. He and Mrs. Bertha Moberley were wed in his daughter Audree’s home in Denver. 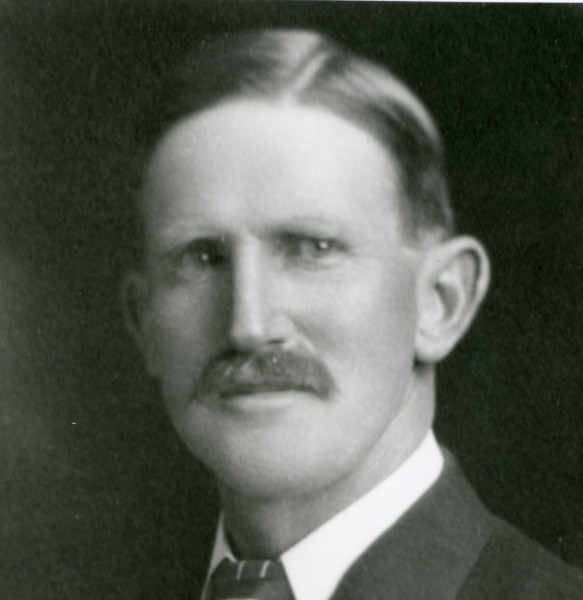 Norman Fry passed away July 30, 1954, just before his book was published. It is a wonderful read and I highly recommend it. You can find a copy at the Poudre Library or you can purchase your own copy through the folks at the Upper Poudre Canyon Community Center.

Most of the information here was taken directly from Norman Fry’s book, Cache La Poudre: “The River.” A few details, and all of the photos that were not attributed to another source, were from a tour hosted by Sue Schneider and Sandy Case Lundt on September 1, 2016.