That was then, this is now. Two blocks of downtown College Avenue

I’m on the Landmark Preservation Commission. Last month at our work session, a guy from the city came and told us about the local regulations regarding signs in town. I have to admit, what he had to say was interesting, but… the pictures!!! They were glorious.

I’m going to share 3 of those pictures with you as well as my best approximation of those same locations today. 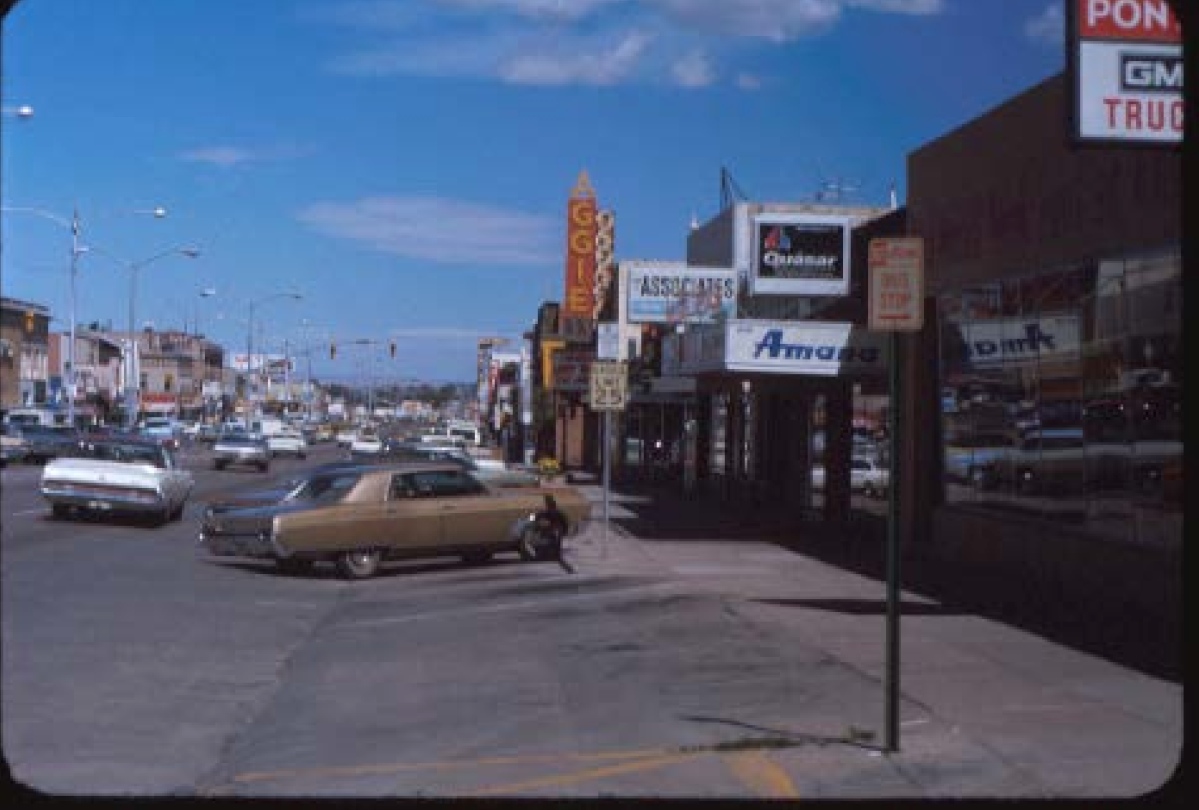 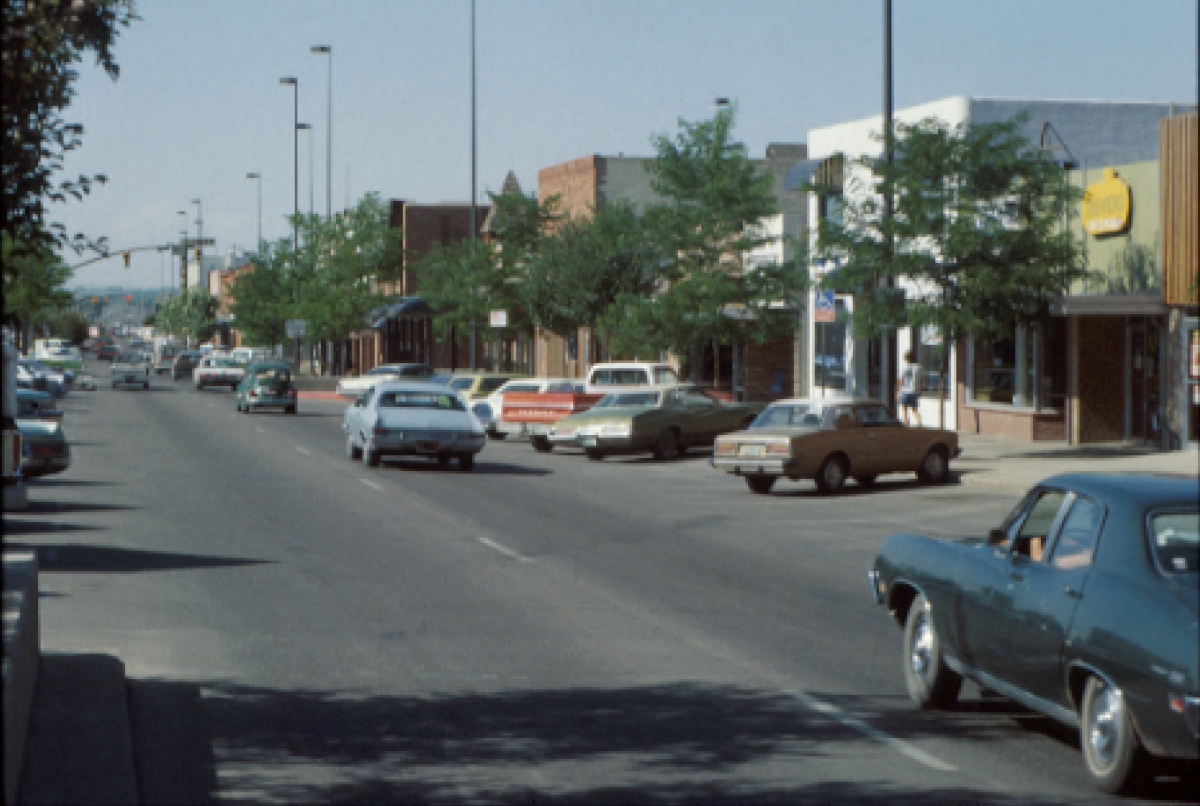 This is the same spot a few years later (at least after 1973 when the city’s new sign law went into effect). 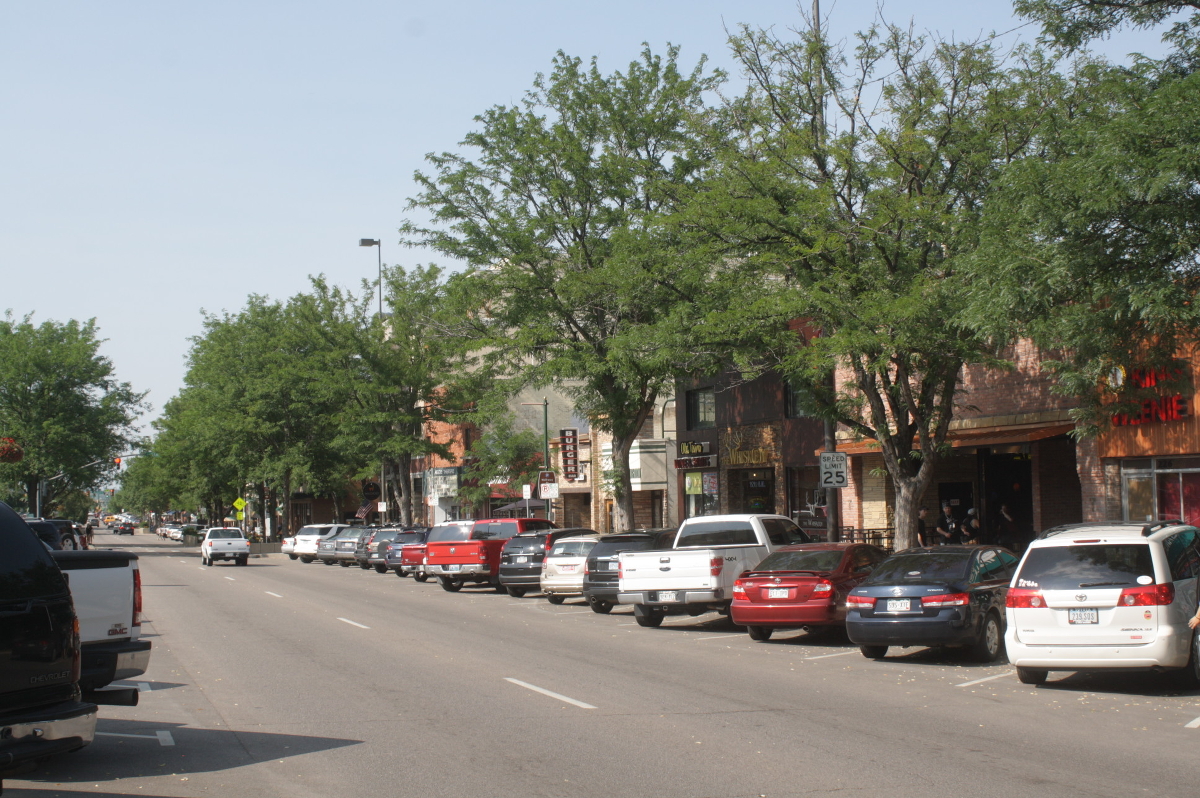 This is the same block today. It’s changed a considerable amount. I used the King Weenie corrugated facade to try to line up this picture with the previous one. But from what I can tell, almost every facade on this block has undergone significant changes since the 70s. 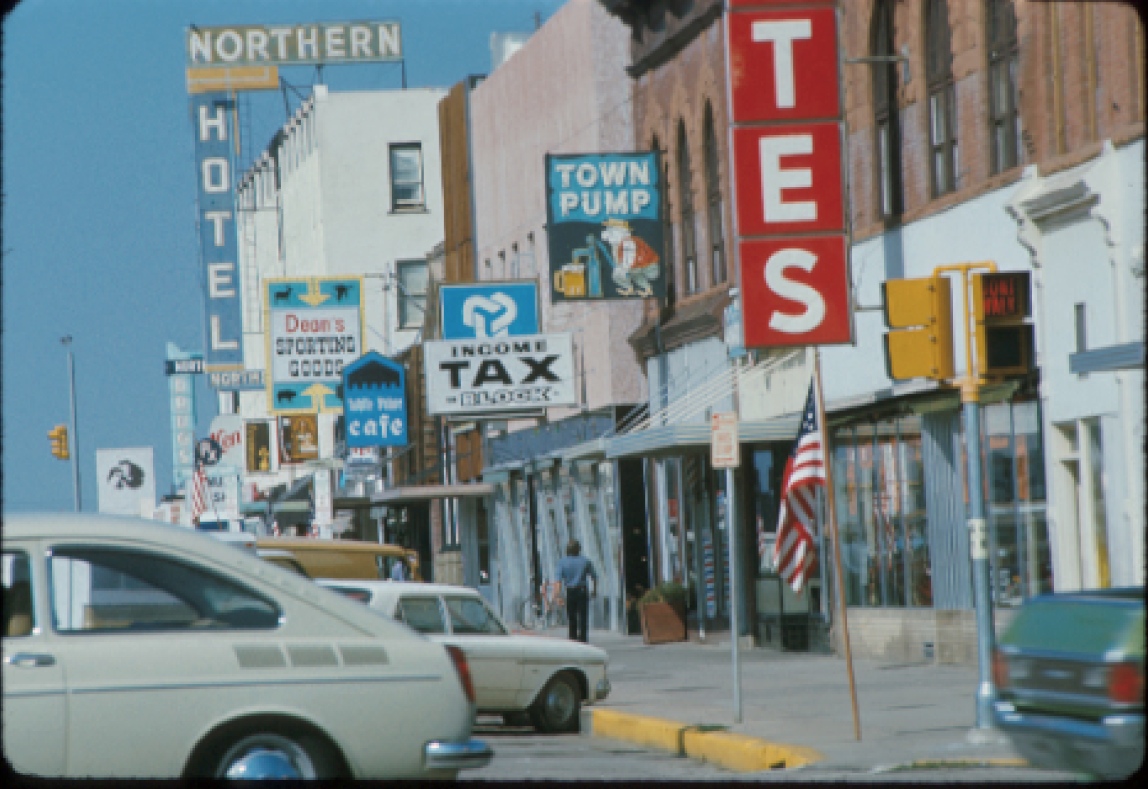 This is the east side of the 100 block of North College Avenue around 1971. 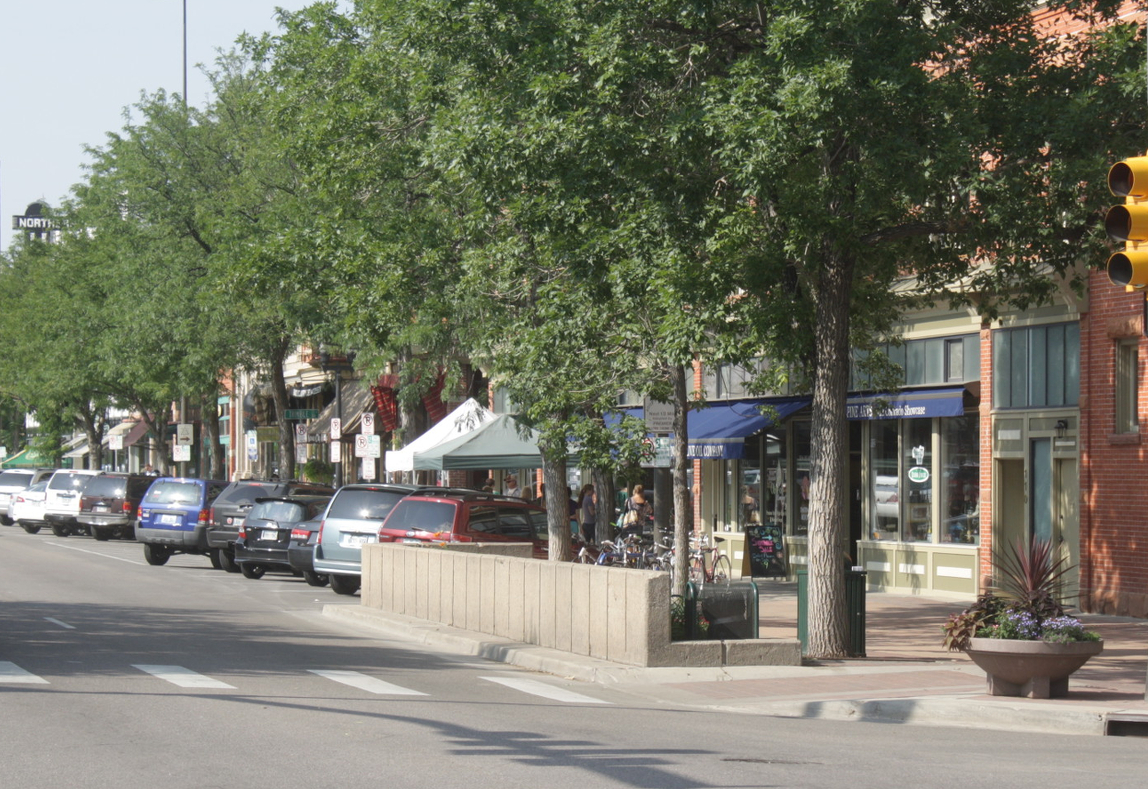 This is my best approximation of the same view today. (The Northern Hotel sign can be seen in the upper left of both photos and the crosswalk sign is fully in the old photo and sorta in the new photo). 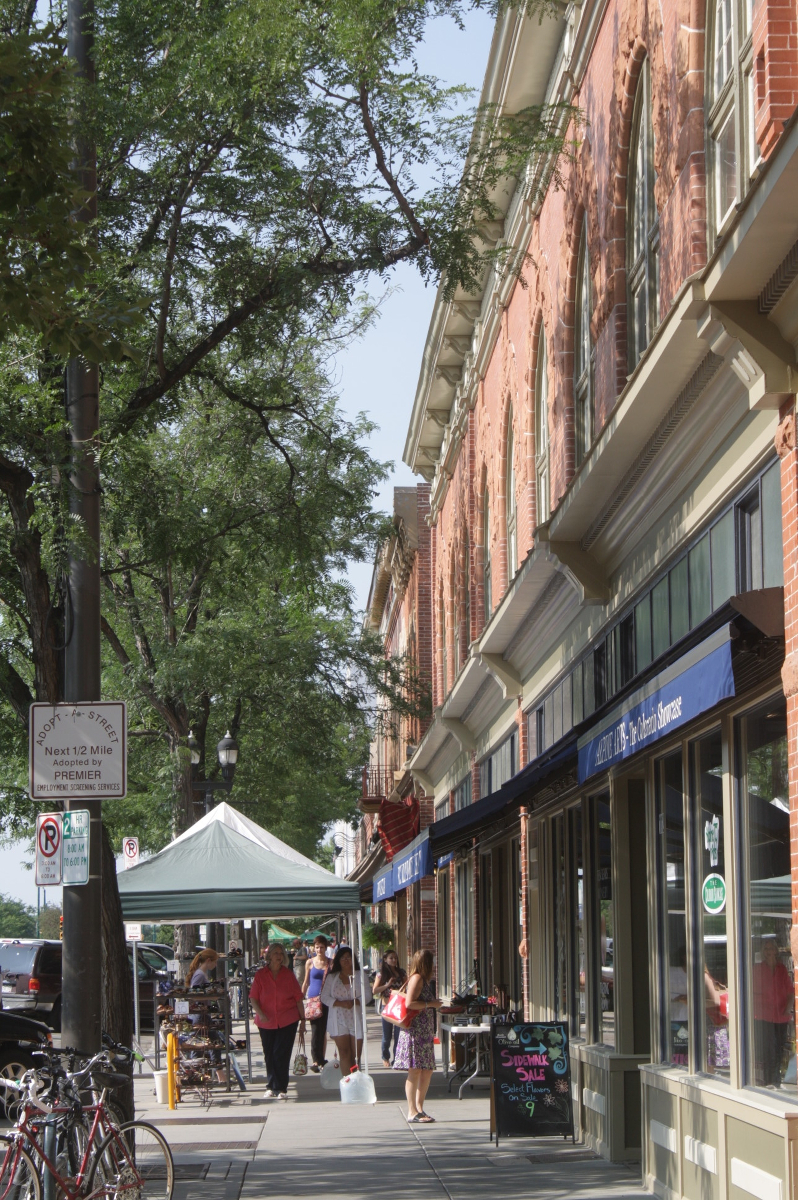 You can hardly see anything in the present day shots because of all the trees, so I stepped behind the tree cover and snapped this photo showing the very different effect of the 1971 sign law compared to how the street looked previous to when that went into effect in 1973.

There were several other photos from that presentation that I’ll hang on to for future “That was then, this is now” posts. So stick around.

The “today” photos were all taken by me. I walked around downtown with the iPad the city loaned me for LPC meetings in one hand and my camera in the other. People must have been scratching their heads wondering what I was up to.

The 1970s photos were from the Landmark Preservation Commission agenda (which is why they were on the LPC iPad) from June 25, 2014. LPC meetings are open to the public. We meet on the second and fourth Wednesdays of every month. Our first meeting of each month is more official and takes place in City Hall. The public is encouraged to come and share their thoughts, concerns, etc. at these meetings. Our second meeting of each month is a work session in the city office on College. It’s fine to come and watch the work sessions also, although there’s not a point in the agenda for public comment (since the goal of the meeting is for us to discuss stuff amongst ourselves). If you don’t want to come to the meetings, but you’re interested in what we’re going to be addressing, you can look up the agendas on the city website. And if you want to send in comments, we don’t have a fancy pants email address that sends the email out to each of us like city council has, but you can contact Karen McWilliams and she’ll relay your message/concerns/whatever-you-send on to us. (Find Karen’s email address here.)