Odds and Ends on the Masons of Masonville

When researching a story, I often come across little details that I find interesting, but that don’t make it into the final article either because they’re tangential or there’s just not enough room. There were a few things I came across last week as I worked on the post about the Masons of Masonville, and I thought I’d share them in the hopes that you all will enjoy them as much as I did when I came across them.

You may have already noticed this when reading the original article, but did you catch the brand just to the right of J. R. Mason’s? Here, take another look: 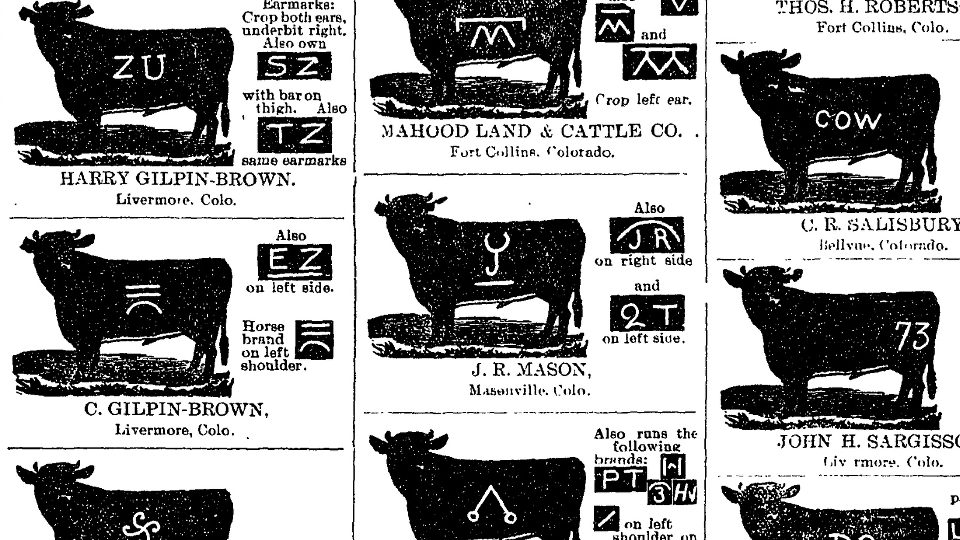 COW. !!!  That just cracked me up when I saw that. I’m can’t decide whether it’s ludicrous or brilliant.

Another little detail that really delighted me was the name of Wesley Mason’s wife, Zella Belle. It rolls off the tongue. Every time I read or write the name I find myself saying it out loud just to enjoy the sound of it.

There area few other interesting names in Zella’s family. Her parents were Zedock and Dora. Siblings included Dora, Ethel, Stella, Voda, William, Elwyn, and Harley. They also had a Chinese cook by the name of Wing Ah. They also had neighbors from India. The name Zella has African origins and Voda means water in some Slavic languages, so perhaps the family’s relationships with folks from all over the globe gave them more freedom in choosing more colorful names on occasion.  (Zella grew up in California which appears to be where Wesley Mason met her.)

Two of J. R. Mason’s children were divorced. I mentioned in the article that Flora Mae married a man and lived in Southern California for awhile. But after their divorce she moved back to Masonville with her two children. Some time after 1920, she remarried. Ira Knapp was the undersheriff of Larimer County. His wife had passed away in 1919. By the 1930 census, Flora Mae and Ira had wed. Ira was nearly 50 years Flora’s senior! And yet he still outlived her. Ira died in 1944. Flora had passed away in 1941.

Ira had a brother named Mason. And Flora’s maiden name was Mason. It’s another little detail that’s neither here nor there, but kind of interesting all the same.

Floyd Mason was also married and divorced. In the fall of 1911, he married Eva Salisbury. But in a July 1918 newspaper, their divorce was announced. “Floyd James Mason of Masonville was granted a final decree in divorce from Eva Mason by Judge Bouton in the county court today. Cruelty was charged.” (Fort Collins Weekly Courier, July 19, 1918) It appears that Floyd was the one seeking the divorce, which makes me think that it was Eva being accused of cruelty. Unfortunately there were no other details in the story which leaves me wondering what Eva had done.

Floyd was remarried a few years later to Mamie Talley. They had one child — another Floyd. Their marriage appears to have lasted until death they did part.

Flora Mae wasn’t the only daughter to marry a much older gentleman. Edith, James daughter by his first wife Mary, was married at the age of 18 to Francis M. Samuels, who was 48. Poor Edith lost both her husband and her father in the same year — 1912. She may have remarried by the next census taking because I couldn’t find anything more on Edith Samuels after the mention of Francis’s death.

As far as Edith getting married at the age of 18, it seemed to be a trend among the Mason girls to get married young. Birdie was married at 21. Vina was only 17. And Flora Mae was either 18 or 19 (and had baby Asa immediately thereafter).

The boys all got married when they were considerably older. Charles was 26, Jesse was probably around 30, Wesley was 34, Floyd was 25, and John was in his mid to late 20s.

James Mason’s son John, and his wife Ora, lived in Masonville for a time. Then they moved to Virginia Dale, and eventually they moved into Fort Collins where Ora was one of the first teachers at the brand new Dunn Elementary School and John was a janitor. For a time they lived on the 300 block of S. Meldrum… where the parking lot of the post office is today. Later they lived on the 400 block of S. Howes. After a house a couple doors down was razed and replaced with an 11-story building, they bailed and moved out to the edge of town. Park Lane Towers North (a 12-story building) now stands where their house once was. 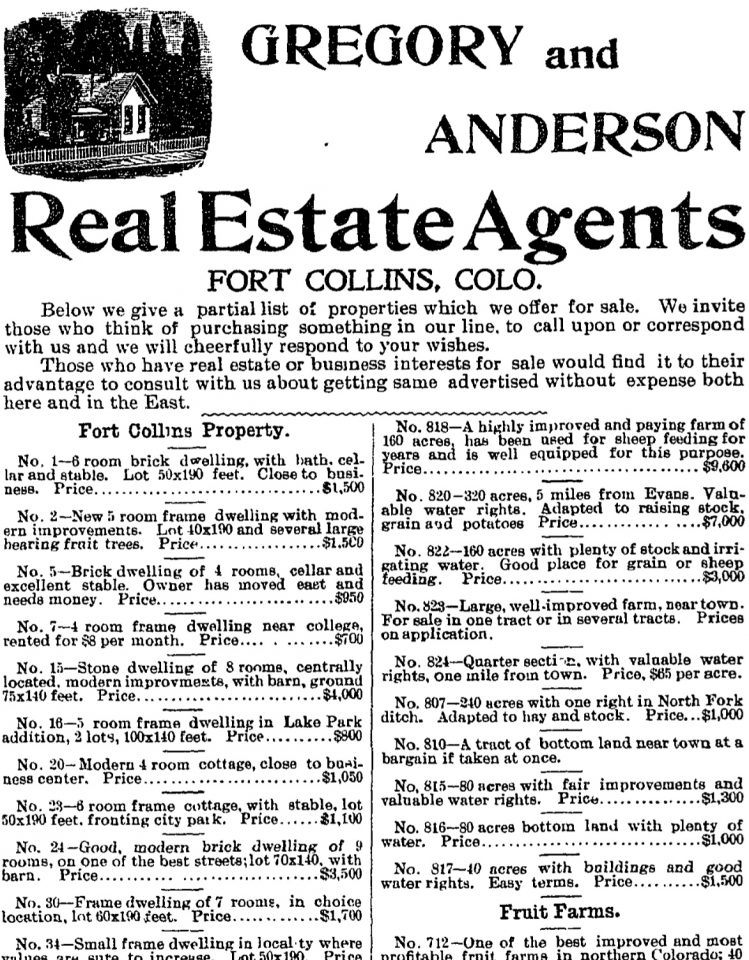 And the last little snippet I’ll include here has nothing to do with the Masons, but I did come across this while looking through an old newspaper that mentioned Mason. It’s a real estate listing of houses in Old Town (which was the new part of town at the time) on the left and some farm properties listed on the right.