Warning: This article is addressing a painful topic and includes some original newspaper ads and articles that might be hard to read. But I think that when covering history, it’s important to address the yucky stuff as well as the more pleasant stories. So with that in mind, let’s walk boldly into this troublesome topic with the goal of becoming more compassionate, merciful, and loving people. Because that’s what we all want, right? Nobody wants to be the bad guy.

This article is from the September 29,1901 Fort Collins Weekly Courier (from the Colorado Historic Newspapers Collection). Click on the image to read at a larger size.

The history of the people of Colorado begins with the Native Americans. A drought in the mid-1300s led to the region being largely abandoned for a time. But in the 1500s, the Apaches moved in (having traveled down from Canada). As they migrated south, bands of Comanches and Utes passed through. The Kiowa may have been around for a time. And then the Arapaho and Cheyenne moved into the area and were here when the European settlers began their immigration.

All of that to say that for a state that takes great pride in pointing out who is native and who is not, most of the people with “Native” stickers on the backs of their cars are likely not native at all, but come from immigrant parents or grandparents or great (add more greats as needed) grandparents. We come from different backgrounds. We have different skin colors, different customs, or perhaps different languages. But no matter where we’ve come from, we’re all here now. Together we form the community that makes up Fort Collins. 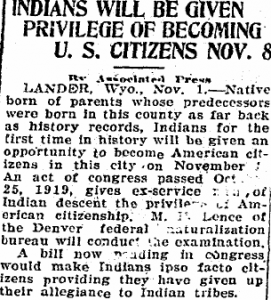 From the November 1, 1920 Fort Collins Courier.

Unfortunately, the mixing of cultures and ethnicities brings with it misunderstandings, distrust, stereotyping, and prejudice. And Fort Collins, despite historically not being a very diverse town, has still had enough diversity to create, if not a bubbling cauldron of racial tension, at least a simmering pot of underlying issues that have occasionally bubbled over, surprising the unaware.

Early newspapers occasionally carried advertisements, short stories, and at least once a long dissertation (see article to the left at top) that dealt with race. They tend not to be overtly caustic articles. But they reek of a white arrogance that assumes primacy and superior intellect. 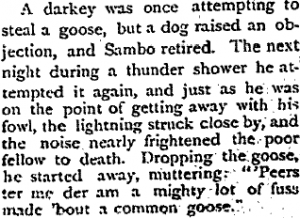 Things ratcheted up a notch when the sugar mill came to town in 1903, bringing with it a large influx of Germans from Russia (often referred to as Ruskies). But a flood in 1904, which wiped out much of the Buckingham neighborhood, led the residents of Fort Collins to offer help to the immigrants, which seemed to bridge the cultural gap to some extent and made the city residents a little more amenable to the newcomers. As Mexicans were brought in to fill growing labor gaps, sentiments changed and most newspaper articles regarding these newcomers carried a more negative tone. Eventually, the children of the Germans from Russia could blend in with the rest of society. But the Mexicans, even children of families that had been in the United States (or U.S. territories) for generations, continued to face discrimination because they looked “different.” 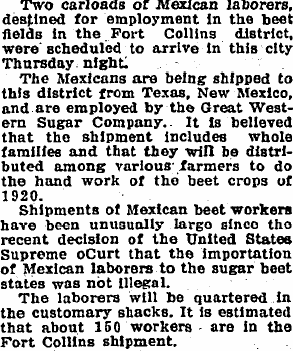 The Germans from Russia that had moved to the area built their own church and appear to have also started their own school for their children. But the Mexicans that arrived were Catholic and began to attend St. Joe’s. They also sent their kids to the public schools. While you would think that this intermingling would make them more acceptable to the residents of Fort Collins, there seems to have instead been an opposite reaction. As I explain in a previous post entitled, Holy Family Catholic Church – A Parish for the People, the Catholics essentially got permission from the diocese to remove the immigrants from their services.

In 1936, Father John R. Fullana was appointed to the Holy Family parish. Fullana excelled at bringing people together. He not only nurtured his own flock, but made a point to find ways to benefit the wider community as well. According to a context written on the history of Hispanics in Fort Collins (pdf), Fullana “sought to mitigate rampant discrimination in Fort Collins by providing Hispanics with their own store and entertainment venue. He opened a cooperative grocery store and frequently rented a local theater to screen Spanish-language motion pictures.” His leadership helped to build bridges, but in many ways it also only helped to skirt the issues, rather than face them head on.

Many Fort Collins businesses refused to serve anyone that looked Hispanic. Signs were put up in windows stating very plainly that Mexicans were not welcomed. And the school district treated students poorly, often seating them in the back of classrooms under the assumption that they had no interest in learning. Many families chose to keep their kids home from school rather to send them in where they were neglected by teachers and made fun of by fellow students. 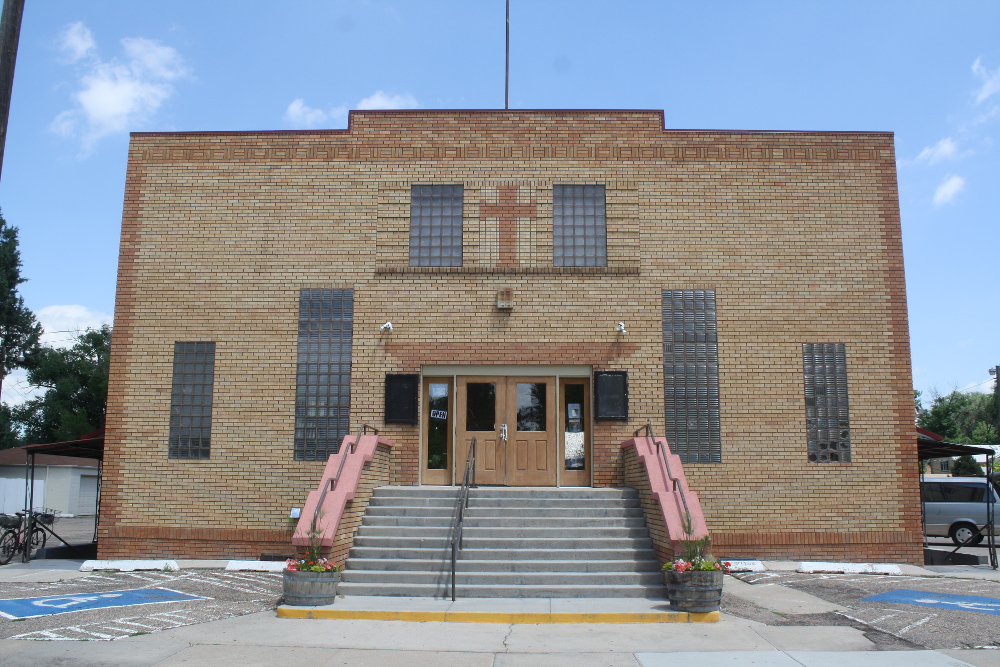 The Holy Family Parish Hall housed a school at one time so that Hispanic children could be educated without discrimination.

In 1968, with the Holy Family school closing soon, the school district realized that they would need to raise money to create more space for elementary students. They put a bond issue on the ballot, but it failed. The district tried again the following year and the Hispanic leaders went door to door, encouraging their community to vote for the bond in order to build a new school in place of the dilapidated Laporte Avenue Elementary that their kids attended.

The bond issue passed and the district immediately proceeded to build Beattie Elementary on the south end of town with the money that had been raised. After all the work the Hispanic community had put into passing the bond issue, there was understandably a huge outcry. They felt as if the district had pulled a “bait and switch” on them. It wasn’t until 1975 that the community would get its new building. The district allowed them to select the name of the school. It was named after Father Fullana, who had done so much for the community during his time in Fort Collins. 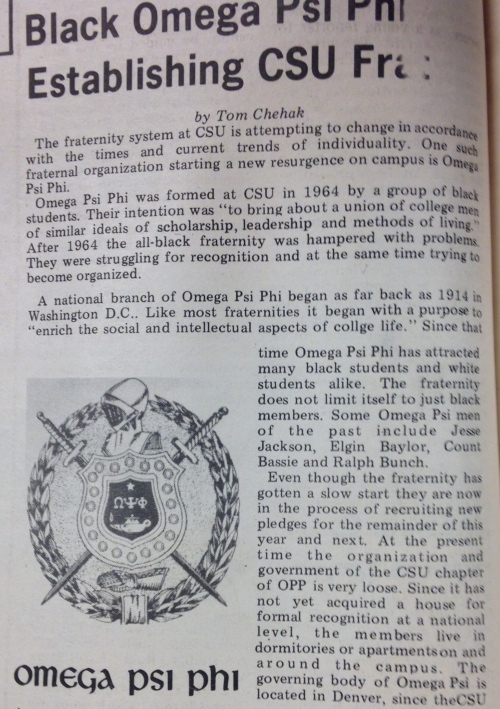 Omega Psi Phi was a Black Fraternity, though they also accepted white members. This article is from the April 1, 1970 CSU Collegian.

The late 1960s and early 70s were turbulent times. In addition to protesting the Vietnam War, young people were raising concerns about the environment and racial and gender equality. At CSU, the Black Student Association and the Mexican-American Committee for Equality joined forces in 1969 and presented a list of demands to then president William Morgan (for whom the Morgan library was named). Their demands focused mostly on increasing minority recruiting of both students and faculty by the university. These demands were eventually brought before the state, but despite a positive verbal response, finances were not raised that would enable the minority recruiting that was being asked for.

As much as we like to think that all of this is in our past, racial issues persist today in Fort Collins. The loss of low income housing affects minorities more significantly than any other people group in the city. School district boundaries have shifted repeatedly until minority students have been coralled into three schools in particular: Irish, Putnam, and Lincoln. The district’s school of choice policy has meant that many of those with time and transportation have removed their children from these schools, creating an even starker sense of segregation within the district.

When student based budgeting was introduced to the school district, the committee that developed the budgeting rubric admitted that they were not adequately offsetting the cost of educating low income students and students for whom English was a second language. Parents and staff members who have approached the district asking for additional assistance have been made to feel like PSD is going out of its way to help, when the reality is that even the additional help fails to meet the levels of assistance that the original student based budgeting committee said would be needed to adequately educate the students.

The Buckingham neighborhood just north of Lincoln Avenue and Andersonville and Alta Vista to the north have consistently lagged behind other city neighborhoods in terms of receiving city services and upgrades. (Image from the Logan Simpson Design Inc. website.)

And the current debate over the funding of upgrades to Lincoln Avenue only serve to highlight the dismal state that Lincoln has been left in up to this point. The three colonies of Buckingham, Andersonville, and Alta Vista (all originally built for workers at the sugar factory which was situated between them) have repeatedly received city services far later than the rest of Fort Collins. It is telling that it wasn’t until the breweries started being built and expanded in this area, and Woodward Governor had chosen the old Coy-Homestead for their new offices, that upgrades to Lincoln Avenue have hit the city’s radar.

I have grown to love Fort Collins in the almost decade and a half that I have lived here. I have found it to be a great city to raise kids, to get involved in civic issues, to have a say and to be involved. I have made good friends. I have seen growth and change that has been very positive and that, as far as I can tell, is community based. But because we have chosen to send our kids to our neighborhood schools, I have also had the opportunity to see the other side. We sent our kids first to Dunn Elementary (a school well supported by the district) and then Lincoln Middle School (a school which is not). We had great experiences at both schools. The teachers are great. The students are great. But the difference in attitude from fellow Fort Collins residents, from students at other schools, and from district employees was a shocking adjustment. It gave me a chance to see what Fort Collins minorities deal with on a daily basis.

None of us are natives on this land. Even the Apache, who were here in the 1500s, had immigrated here. And none of us wants to be a douchebag either. And we don’t have to be.

This is a two sided issue. Trust has been lost. Hurt has been caused. Inequalities have been developed and fostered. But it doesn’t have to stay this way. We can make a change. The hardest job belongs to the minorities who have been wronged, because for unity to grow, forgiveness must be extended. And that is no easy task.

But there also needs to be a change on the side of those who have maintained these biases – whether knowingly or not. It behooves us to learn more. To get the facts and figures but also to get the stories, to understand the slights and disregard and hurt that has been caused. And then we need to do something about it.

If you have helped to create positive change in Fort Collins in this area, I’d like to hear about it. Please add your thoughts and stories in the comments section.

The “Not Native” sticker is from Phunomenal.com.

The newspaper clippings were all taken from Colorado Historic Newspapers online, except for the article on the fraternity at CSU which was from the April 1, 1970 CSU Collegian which I accessed through the Archives & Special Collections department at Colorado State University.

The image of the proposed work on the Lincoln Corridor was taken from this page at Logan Simpson Design.

I gathered information for this story from several resources including: