Why Bicycling Was Racy in the 1800s 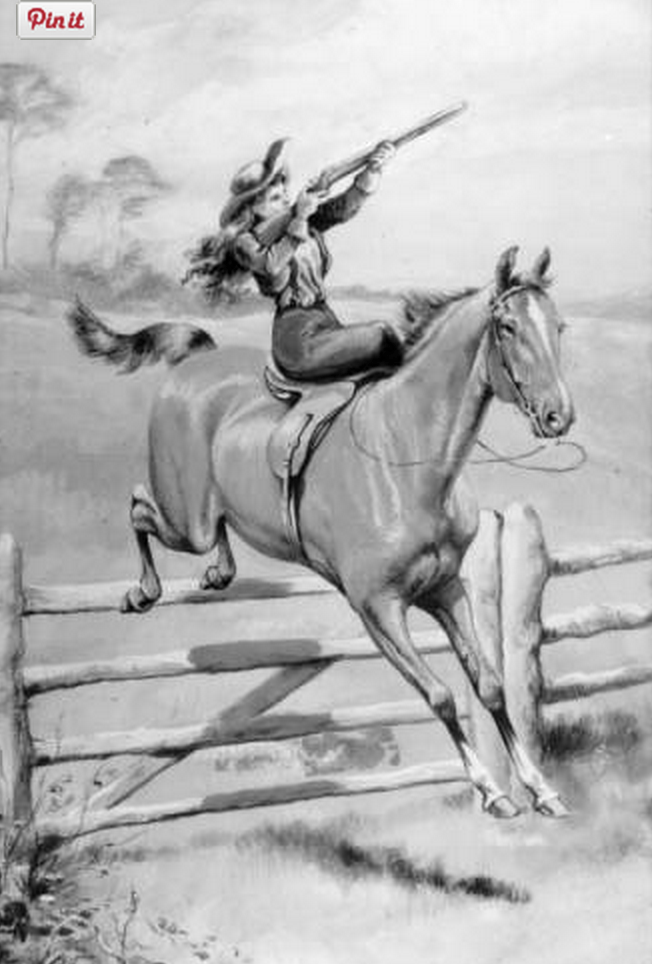 Once upon a time, most people walked if they wanted to get from point A to point B. Men with a little more money might ride a horse, or ride in a buggy behind a horse. But during Victorian times, women often had to rely upon a man if she wanted to travel further than just a few blocks from her house. Of course, there were some women that rode horses. But they rode side-saddle and they wore the appropriate clothing of the day which discretely covered all body parts including the ankles. Now in the “Wild West” there were some women who had no qualms about throwing on a pair of britches and straddling a horse. But it not only wasn’t the norm in America overall, but it was considered somewhat scandalous at the time.

Thankfully, most women weren’t so risqué as to gallop about in men’s clothing riding astride a horse. So it was a problem that was safely out on the fringe of life where it wouldn’t put silly thoughts into the heads of one’s wives, mothers, or daughters.

Then came the bicycle. And the world was turned upside down. 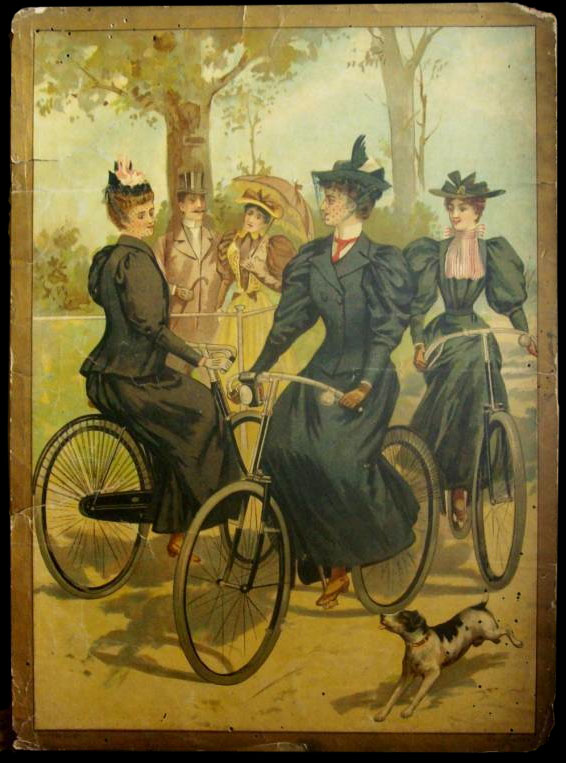 To understand the change that took place, you really need to think back to what women were wearing in the Victorian era — corsets and full length dresses with layers of petticoats and other undergarments underneath. It made cycling a very difficult endeavor for women. First of all, you couldn’t just hop on any old bicycle. It had to be particularly made to accommodate a dress. But even then you still had to worry about the edges of the dress getting caught in the spokes of the bike or collecting dust and dirt from trailing on the ground.

Nonetheless, the idea of being able to hop on this mechanical transport system and take yourself anywhere… ANYWHERE! without requiring a horse, or a buggy, or a man. Well! I tell you what. This new fangled machine was an idea that sparked the excitement of women everywhere. It meant freedom of movement in a way simply not possible for most women before that point. 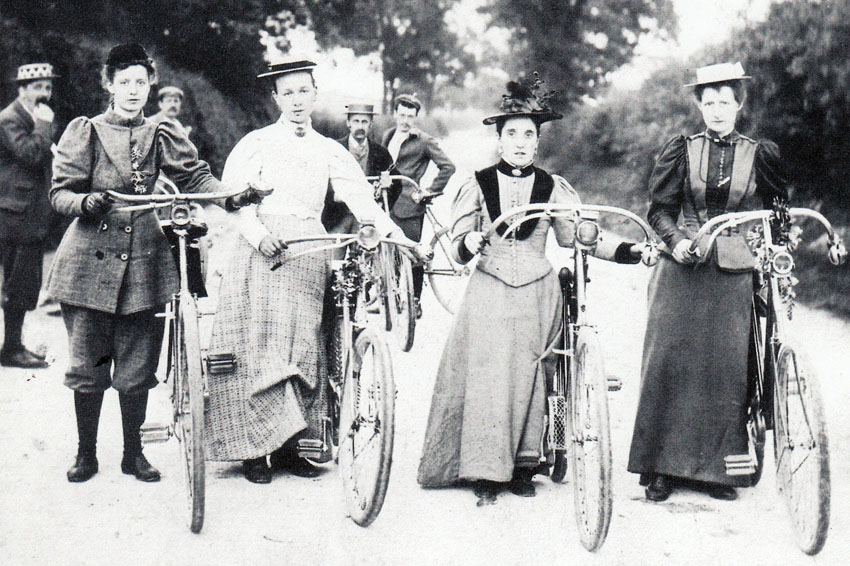 Women’s clothing began to change in order to accommodate this new form of transportation.  Note the woman in trousers on the left. (Image from the Online Bicycle Museum.)

Skirts began to get shorter. But in order to retain some sense of modesty, women wore boots when riding in order to be sure ankles were still fully covered. In a February 24, 1898 article in the Fort Collins Courier I found mention of gaiters becoming a popular new fashion. The reason behind it was that women were so used to the feeling of having boots over their calves when biking, that they took to wearing gaiters when off the bicycle to keep that same snug feel.

This article on the popularity of women wearing gaiters starts with health reasons for the new fad, but then admits that the wearing of the bicycle boot was probably at the heart of it all. (February 24, 1898 Fort Collins Courier – 1st half of article.)

Eventually women took to wearing bloomers. I’m not talking about frilly pant-like layers underneath a skirt. I’m talking about straight out and out pants. But at the time, even the pants that men wore were occasionally called bloomers. And by golly if women weren’t tossing their skirts aside to wear these scandalous things. It was a serious concern among the proper folks in society. 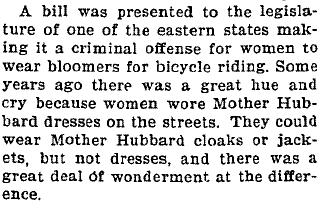 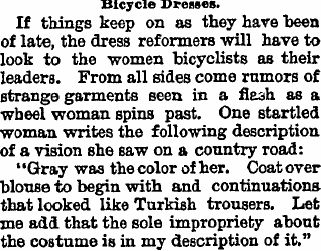 While some saw only scandal, others saw an exciting opportunity for change in society. (From the September 21, 1893 Fort Collins Courier.)

The love of bicycling eventually won out over the love of keeping women in skirts and before long pants started to enter the mainstream.  It certainly wasn’t an overnight change, but by the time of Rosie the Riveter, there was an increasing understanding that women were needed in the workforce, and they certainly weren’t going to be getting anything done in corsets and long skirts. 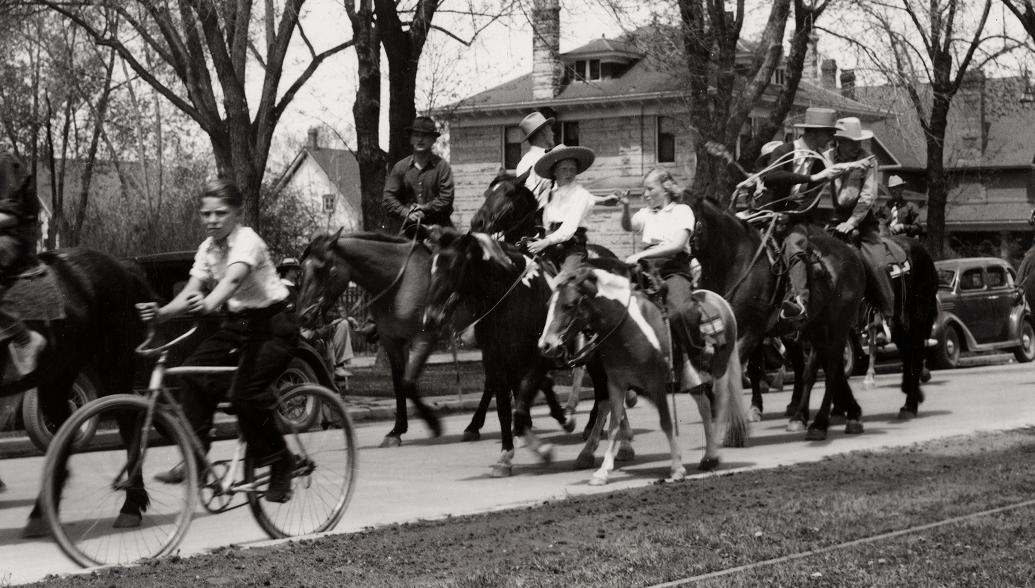 College Days Parade – 1939. Not only are the two girls on ponies riding astride, they’re also wearing pants.  (From the CSU Archive-Print #9227.)

You’ve come a long way baby! And your bicycle is the trusty stead that put you on the road to many of the freedoms you enjoy today.

Additional sources for this article:

Information about perceptions of women on horseback came from Wikipedia and an article entitled Women, Men, and Horses:Looking at the Equestrian World Through a “Gender Lens”.