Writing about history often means reading through newspaper articles and books, talking to people and writing down their recollections, piecing together migration stories through Ancestry.com and census records, and looking through old photographs that are on file with the city archive. But occasionally a historian will come across a beautiful, first person account of some time in history that really captures a moment in time in a way that these other resources don’t.

Last year, while looking for something else entirely, I came across a small memoir written by a woman who, with her husband, built the house where I currently live. It was an incredible find and I almost jumped on a chair in the middle of the library and shouted “Check this out!” at the top of my lungs. (I managed to restrain myself and ended up pacing back and forth for awhile to get out the sudden rush of energy and excitement.)

Hilda Brand Ritter wrote about moving to Fort Collins, raising children, and living in a few different places around town. Each section of her story is tied to a specific house, showing the deep connection she felt with “place” and the strength of its ties to her memories.

As much as I was thrilled to read about my own house, I found the introduction to the book to be utterly charming and well worth sharing here. It really captures the excitement and the hardships that a young couple with one child experienced as they moved to the area in 1919. So rather than summarizing what she’s written, I’ve transcribed (with typos included) the first couple of pages of Hilda Ritter’s memoir here for your perusal. 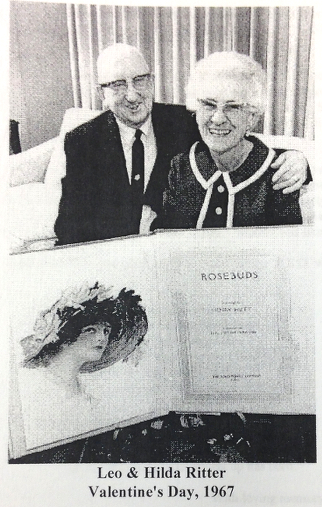 Leo and Hilda Ritter as shown on the front of Hilda’s memoir.

We left Missouri (Leo, Jack, 8 1/2 months old, and I) on May 24, 1919 bound for Colorado. We had had a very rough winter. For many years I had asthma off and on the whole year through and 1918 was a bad year. Jack was born Sept. 15th, 1918. After having a breast infection, I developed influenza and pneumonia. I went to Mother’s house in Colombia, Mo.. At the same time, Gladys, my sister, had the same illness. Help was impossible to get because of the flu epidemic. Columbia had so many University students, Christian and Stephens Colleges and many, many soldiers. Aunt Rose (Mother’s sister) came from Mexico, Mo. and Leo came from Mexico every time he could get away from work at Worrell’s Jewelry Store and we both recovered. Jack and I returned to our home in Mexico.

Then at Christmas time Leo contracted the flu. After Christmas, I had it again and Jack had convulsions and pneumonia so finally Dr. Gibbs (our family doctor.) suggested we move to Colorado. His son had hay fever and asthma and yearly went to Colorado Springs for relief. So the doctor felt he could recommend moving there. And if you read the biographies of the early setters here, you’ll find many came West because some one in the family had asthma or tuberculosis (often called consumption).

Leo had to quit his job. It wasn’t easy for him to cut loose from a salary. He had just gotten his degree in Optometry in the spring of 1916. We sold our household goods, packed a few things to bring to Colorado and stored some to send later, like our new piano, a few keepsakes in furniture and wedding presents.

Leo answered an advertisement in the Optometric Journal for “help wanted in Fort Collins, Colorado”, talked to Mr. Oscar Messerschmitt, the Proprietor, over the phone and secured the position. It turned out to be a lucky move – we never regretted the decision.

By the time I reached Denver, I was better and never was bothered again except once. We both like to ice skate, but in Missouri my ice skating amounted to standing around the bon fire most of the time trying to breath and keep warm. But after we discovered I could breath well out here, we decided to go ice skating. We went out to City Park, had new skates and high hopes. It was a perfect night, quiet, no wind and moon light. It was great fun. So we went again soon and I got along quite well, but on the third time, I had a very bad time with asthma. So that settled my ice skating once and for all.

Except for one trip to Missouri when Mother was very ill, I didn’t go back until 1939, when we stopped there on our way to New York to the World’s Fair. Of course, Leo had been there to see his folks at Jackson, Mo. and once he took Jean and Jack.

We reached Denver and spent the night at the Oxford Hotel on 17th street, not far from the Union Station. Then on the morning of May 26, 1919, we left Denver for Fort Collins by train, Colorado and Southern At that time the train backed into Boulder and then headed for Longmont, Loveland and Fort Collins. The conductor always called out the name of a stopping place before the train arrived, so when he called out Loveland, I couldn’t believe my ears, because there was a popular song at that time:

Never having seen the mountains before, we were awed by their beauty. It was spring; flower were blooming – everything was lush and beautiful, a fairyland to us.

Leo, Hilda, and little Jack lived in the Northern Hotel their first week in town. Then Mr. Messerschmidt managed to find them a spot at 901 W. Mountain, a house owned by Abe Akin. They lived in two upstairs rooms of the house using a two burner gas plate that you had to feed quarters in to keep running. On top of one of the burners they’d set a little oven when they wanted to bake. And they shared the bathroom with two other families.

Over time, and after a few different moves, the Ritter’s were able to build a house on Oak Street, which they moved into sometime in 1925. They later moved to Elizabeth Street and lived there for a much longer period of time. Each segment of their story is touching and there are so many references to places and events that are still around today (Cheyenne Pioneer Days, for example) that it’s easy to feel a connection with the family (even if you’re not living in the house that they built).

If you would like to read Hilda’s story, you can’t check it out from the library, but you can sit and read it. Head to the magazine section upstairs in the Old Town library. The book is entitled, Rambling Down Memory Lane, by Hilda Brand Ritter.

The photo of the Northern Hotel is from the Fort Collins Archive – H03486.