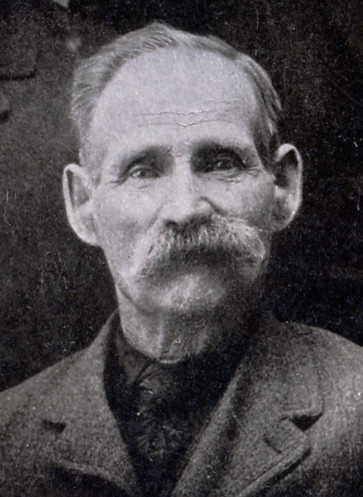 In 1859 Rock Bush came from Green river, Wyoming, where he had been employed for two years on a ferry, and took up a claim on the north bank of the Cache la Poudre river, about three miles southeast of Laporte, where he still lives.
— Ansel Watrous (1911)

Laroque Bousquet was born in Québec, Canada in 1830 to parents of French descent, his ancestors having emigrated to Canada some time in the mid 1600s. In 1857, Laroque set off for adventure in the Nebraska Territory (which included most of what is now Wyoming). With a team of oxen, he crossed the Great Plains, finally arriving at the Green river after a three month journey. There he settled in as a ferry man, shuttling emigrants across the river on their way to Utah, Oregon and California. He met a Shoshone woman who is called Josette Plante in family genealogies. Rock and Josette settled in together and in 1859, they had a son, Louis.

While ferrying people across the Green river, Laroque, who also started to go by the name Rock, began to hear stories of a beautiful and fertile valley to the south, along a river called the Cache la Poudre. With a newborn son, he decided he needed to settle down on some land of his own. So the three packed up and traveled southeast where they settled on some property just north of the Cache la Poudre river, three miles downstream from the town of La Porte. His claim was about where the McMurray Natural Area and Soft Gold Park are today.

Rock and Josette added two more sons to their family, Antoine and Joseph. It appears that Josette died around 1867. Only Rock and the three boys appear in the 1870 Larimer County census.

When Rock first settled on his property, there were only a few other families living along the river between La Porte and the confluence of the Poudre river and the South Platte (where the Greeley Colony would be settled a few years later). But in 1860, settlers began to trickle in. Among them were Joseph Mason, J. M. and F. W. Sherwood, A. F. Howes, and G. R. Strauss.

Ansel Watrous recounts a bit of excitement in Rock’s life, saying that:

“In 1865, a band of thieving, blood-thirsty Sioux Indians swooped down upon the Caché la Poudre valley and drove off a large number of horses. Among the sufferers from the raid was Rock Bush, who lost several head of animals. He put in his claim for damages to the Government soon after, and in November 1886, twenty-one years afterward–he got word from Washington that he had been allowed $700–the amount of his actual loss without interest. His claim, with thousands of others of a similar nature, had laid in some pigeon hole at Washington all that time awaiting the slow-going movements of the powers that be. Mr. Bush, who is still living and one of the surviving venerated pioneers of the Caché la Poudre valley, was thankful that his life was spared to see the end of the matter and to enjoy the use of the money so long past due.” — Ansel Watrous (1911)

In the early 1870s, Rock married Johanna Forbes, the teenage daughter of another settler. She had emigrated from Germany with her parents in 1862 when she was 9 years old. Together Rock and Johanna had seven children — Philomela (called Amelia, or Mealia), Henry, Augusta (called Gussie), Rock Jr., Guy, George, and Ralph. Henry and Ralph must have died while still quite young because they’re not mentioned at all in Ansel Watrous’s history. Ansel also left out the fact that Rock had three sons by his Shoshone wife (who also wasn’t mentioned). 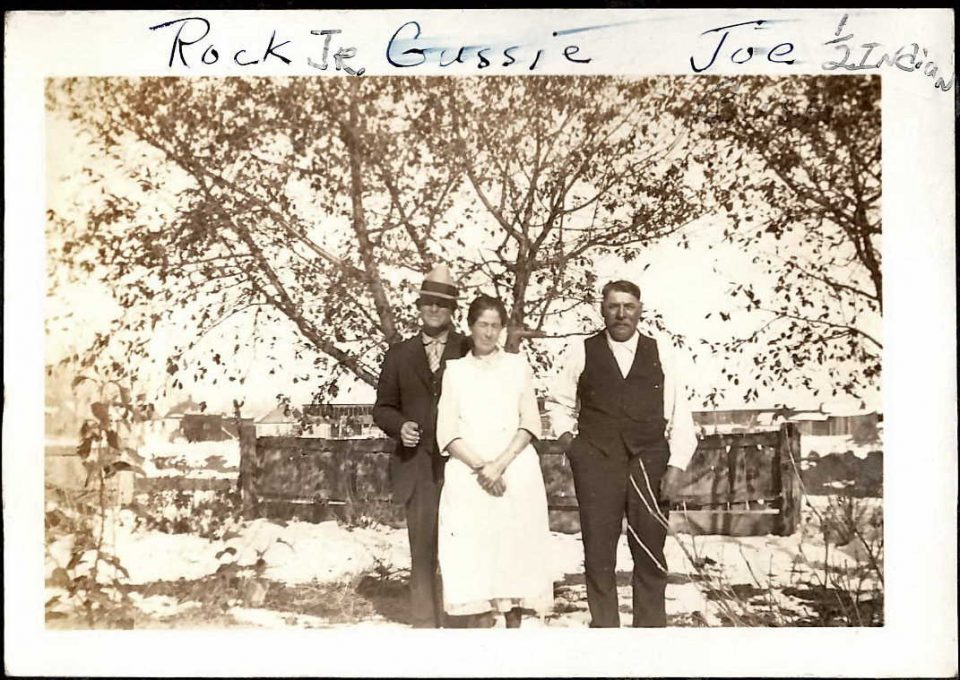 Rock’s oldest boy, Louis, moved on to Livermore for a time, showing up there in the 1880 census. Then he appears to have moved to the Pine Ridge Indian Reservation in South Dakota.

Antoine ended up in Wyoming. I haven’t been able to find any more information than that on him.

Joe moved to South Dakota where, in 1900, he was a day laborer and boarded with the Clement family. By 1910, he shows up in Rawhide, Wyoming, married to the Clements’ daughter, Sadie, and they have three children. They ended up having six kids total. 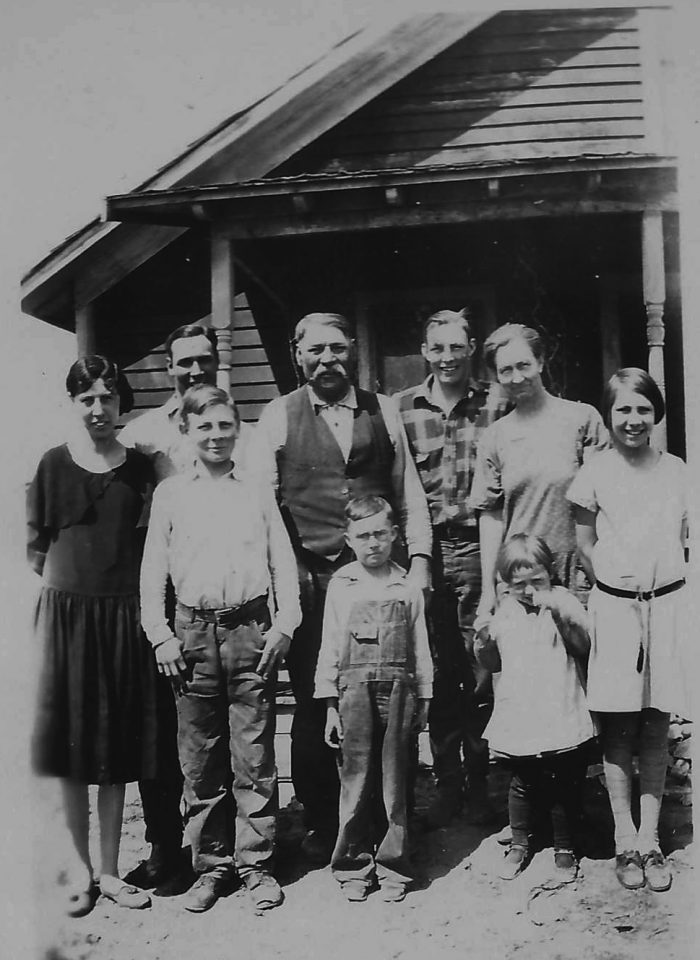 Joe’s family — including one grandson. (Photo from Marie Tocco via Ancestry.com.)

Rock’s daughter, Amelia, married Joseph Henry Lariviere. They ended up in Detroit after spending some time in Minnesota. They had seven children. 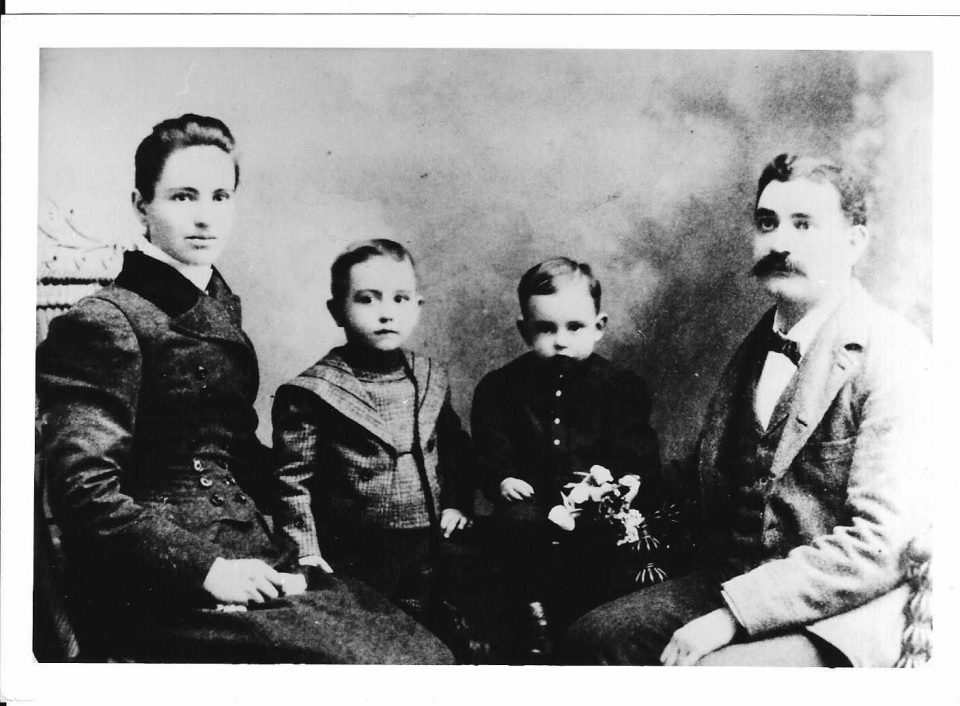 Amelia Bush with her husband Joseph Henry Lariviere and their children. (Photo from allenvi on Ancestry.com.)

Gussie married Alphons Desjardins and they had two children — Alvina and Paul. They remained in Fort Collins and lived at 431 N. Whitcomb near what is now Lee Martinez Park. 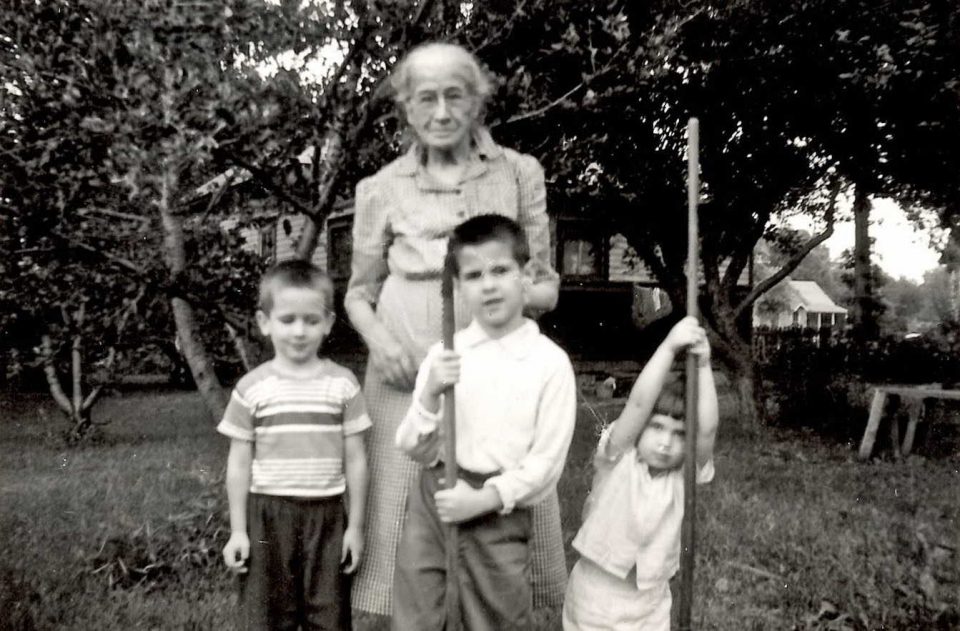 Gussie with her son Paul’s children. (Photo from Joseph Lariviere via Ancestry.com.)

Rock Jr. married Maud Campbell and they had eight children. They stayed in the Fort Collins area and farmed… possibly on the same land that Rock Sr. had settled.

Guy married Margaret Schauer and they had five children. They lived in a house on the 300 block of E. Mountain, between where the Western Convenience gas station and the Organic Alternatives marijuana shop are today.

George married Grace Marie Parsoneault and they had three boys. Grace died in May of 1918. Their middle son died only two days later. It’s likely they both died of the same illness. 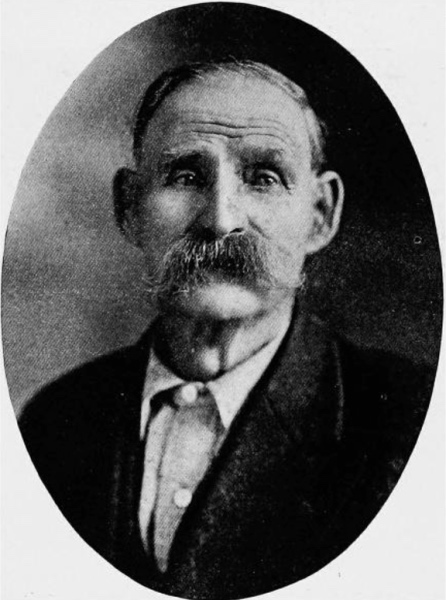 The picture of Rock Bush in Ansel Watrous’s History of Larimer County.

Though many of our early founding fathers are immortalized with streets being named after them, or camp grounds, or parks, I have yet to come across anything in Fort Collins or Larimer County that bears witness to Rock Bush. Ansel Watrous does mention him many times in his History of Larimer County however, which bears witness to his importance and value during the early days of Fort Collins.

Johanna passed away in 1913 and Rock followed two years later. They are both buried in Grandview cemetery.

But I first learned about Rock Bush while reading through an early history of Fort Collins on the Archive’s website — The Colorado Gold Rush, Early Settlement, and the Creation of Fort Collins, 1844-1866.