When Upton Sinclair published his book, The Jungle, in 1906, it sent shock waves across the country. The working conditions of immigrants in the meatpacking industry of Chicago not only injured the nation’s sensibilities, but concern over the unsanitary condition of the meat that was being sold in stores led to reforms such as the Meat Inspection Act.

Hope Williams Sykes’ 1935 novel, Second Hoeing, struck a similar nerve. It exposed the harsh conditions and discrimination against the German immigrants from Russia that worked in the beet fields of northern Colorado. 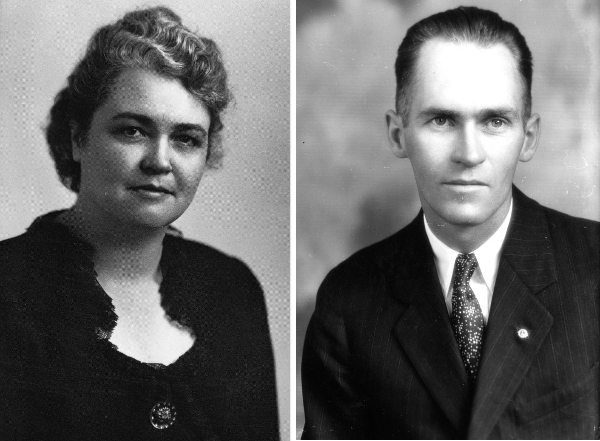 Hope and Howard Sykes lived at the corner of E. Vine and Summit View Drive (AKA Timberline Road) in a house located just behind a small gas service station. Howard owned and operated the gas station and Hope taught at the Plummer school, just across the street. Less than two miles to the west of their house stood the four-story sugar beet factory with its tall smokestack and the stink of rotting silage. And farms spread far and wide in every other direction growing a variety of crops. Many of the fields grew beets for the sugar factory.

Hope Sykes’ position as a teacher in a rural area, her interactions with customers of the gas station, and her view of the fields out behind her house, gave her an immersive view into the lives of the immigrants that toiled under the harsh conditions that the beets and the industry required. For seven years she took notes, capturing mannerisms of speech, understanding relationships within families and the wider immigrant community, and observing the customs of the Germans from Russia. Because of Sykes’ attention to detail and her lengthy information gathering process, she was able to write a novel that, though fictional, rings clear and true regarding the people, the struggles, and the small triumphs of the Germans from Russia who endured back breaking work in order to make a way for themselves in northern Colorado. 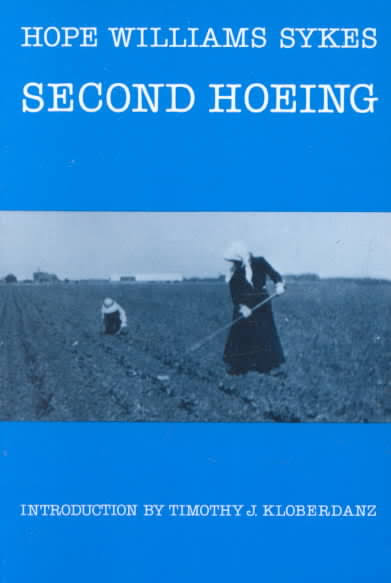 Hope Williams Sykes originally published Second Hoeing in 1935. She ran a second edition in 1962. And in 1982, the University of Nebraska Press published a third edition.

Second Hoeing is the story of a young girl, Hannah Schreissmiller, who is about to come of age, signified by being confirmed in the church. For Hannah, confirmation takes place near the end of her eighth grade year — a public affirmation of the baptism received as an infant. Though most students are about thirteen years old during their eighth grade year, Hannah and her friends are sixteen. Because children were needed in the fields during planting, hoeing, and harvest, they missed a great deal of school.

Hannah is excited to finally be able to go to high school. She would be the first in the family to do so. Her older brothers have all had to stay home and work the fields, at least until they turned 21 and could go out to work for themselves. Her older sisters are all married with young children. Though Hannah is old enough to marry after her confirmation day, her love of learning fuels a longing to continue her schooling. Even the rapt attentions of a young immigrant boy aren’t enough to convince her to settle down and start raising a family of her own.

But Hannah’s life doesn’t go as planned. The harsh realities that the immigrants faced took their toll, and Hannah’s consistent devotion to her family meant that she would make some hard choices that would change her future forever. 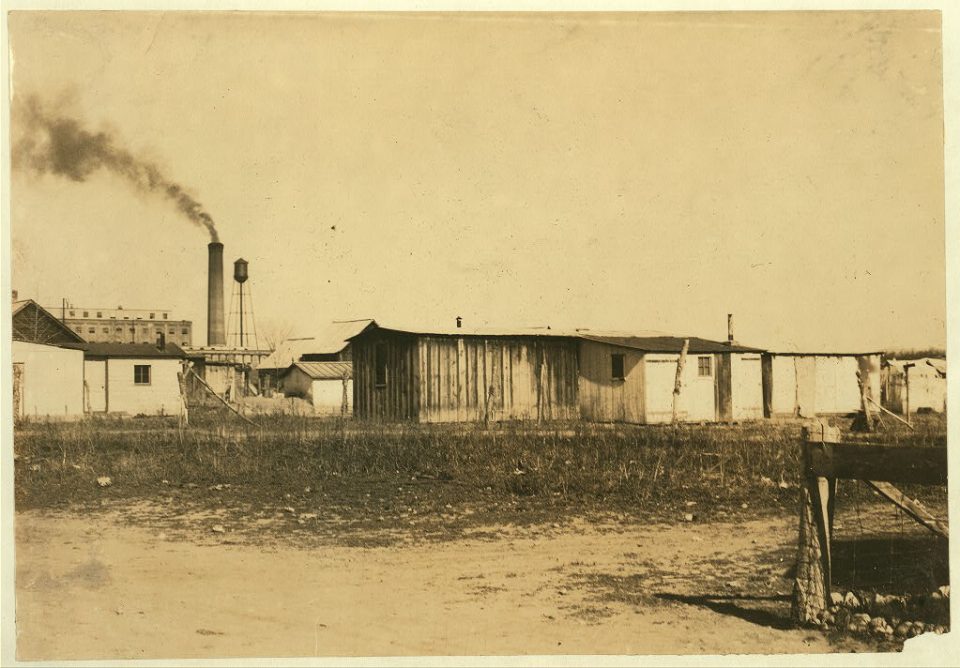 The Buckingham neighborhood was called “The Jungles,” possibly in part alluding to the Upton
Sinclair book by the same name. Here the sugar factor can be seen behind some shacks in the Jungles.
This neighborhood still exists in Fort Collins and is located just north of Lincoln Avenue and the new Woodward complex. (Library of Congress photo taken by Lewis Wickes Hine in 1915.)

Second Hoeing is over 300 pages long, but it’s an easy read and the story is so engrossing that I found it hard to put the book down. Hannah is a likable character, and though her situation is quite different from what most of us have experienced, she’s still a typical teen and therefore easy to relate to.

The fact that the story is set in the Fort Collins area, (called Valley City in the book) adds a layer of intimacy with the characters as you can imagine exactly where they’d be as they attend church (probably attending the German Congregational church at the corner of Whedbee and Oak Streets) or go shopping for a confirmation dress (at one of the shops along Linden Street). 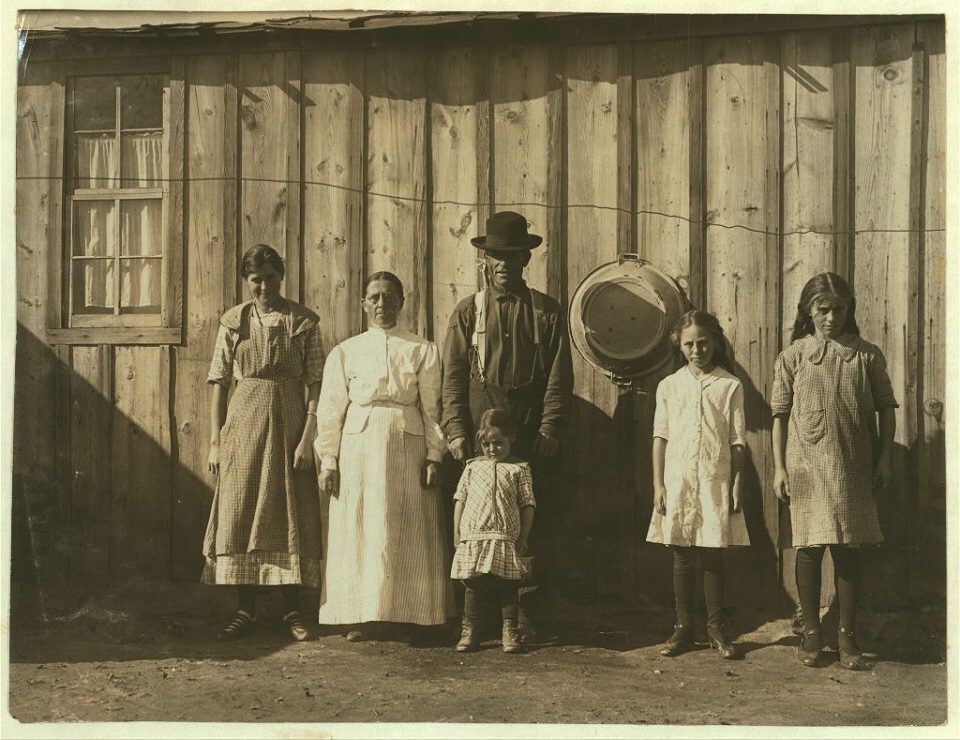 This family owned a house at 430 N. Loomis (which is still in existence). But for six months a year they’d board up the house and move into a shack in order to be nearer to the beet fields where they worked.
Even the children helped in the fields. (Library of Congress – digital ID: nclc 00363)

I’d highly recommend reading Second Hoeing. I found my copy at the ARC thriftshop on S. College, but there are also used copies on Amazon for a penny (plus shipping). Or buy a new copy using the link below.

In 1915, a photographer by the name of Lewis Wickes Hine came through the Fort Collins area and took several photos of beet workers and their families. He donated these images to the Library of Congress and are now accessible online. All of the yellowing images shown here were taken by Hine. Hine’s photos cover a broad geographic area, but the pictures are compelling and poignant. You can view the collection on the Library of Congress website. (This includes more than just the photos he took in northern Colorado.) Try this link to see only the photos he took in the Fort Collins area. 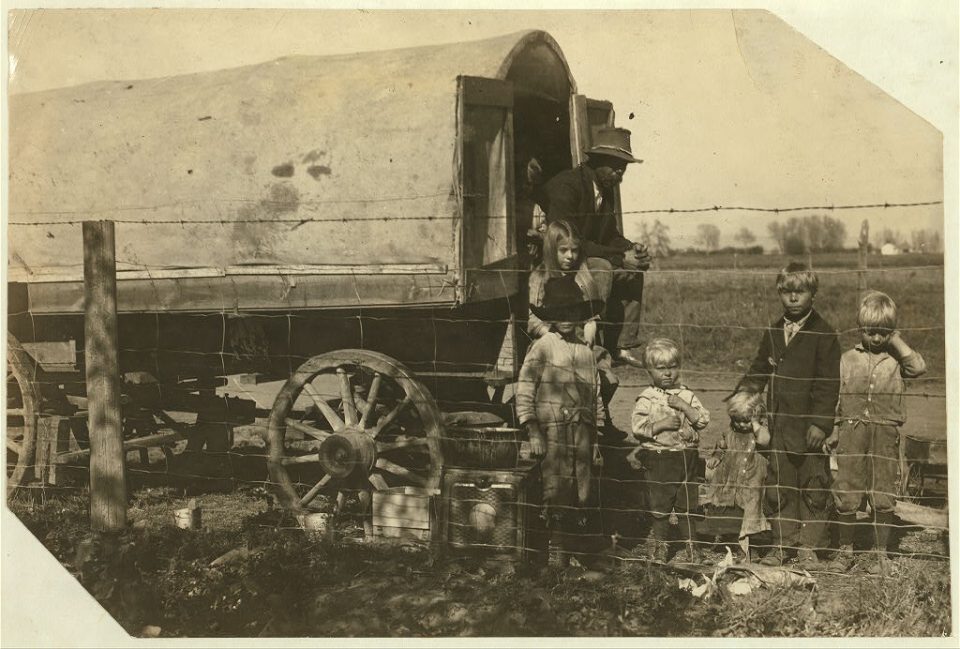 The caption on this photo from the Library of Congress reads: “The prairie-wagon home of a family of itinerant beet workers, now camped near Ft. Collins, Colo. Street family. The children 7- 8- 10- and 12
work steadily and I saw the tiny girl pulling beets after sunset on the following Sunday, and they had not
yet finished. The father told me ‘We got squeezed out of the mountains,’ one of the neighbors said they
has been chased out because they wouldn’t send their children to school. Living on the edge of Ft. Collins, they boldly work the children and violate school law. Came from Log Cabin, Colo. Location: Fort Collins [vicinity], Colorado / Photo by Hine, Oct. 30/15.” (Control #: ncl2004004413/PP) 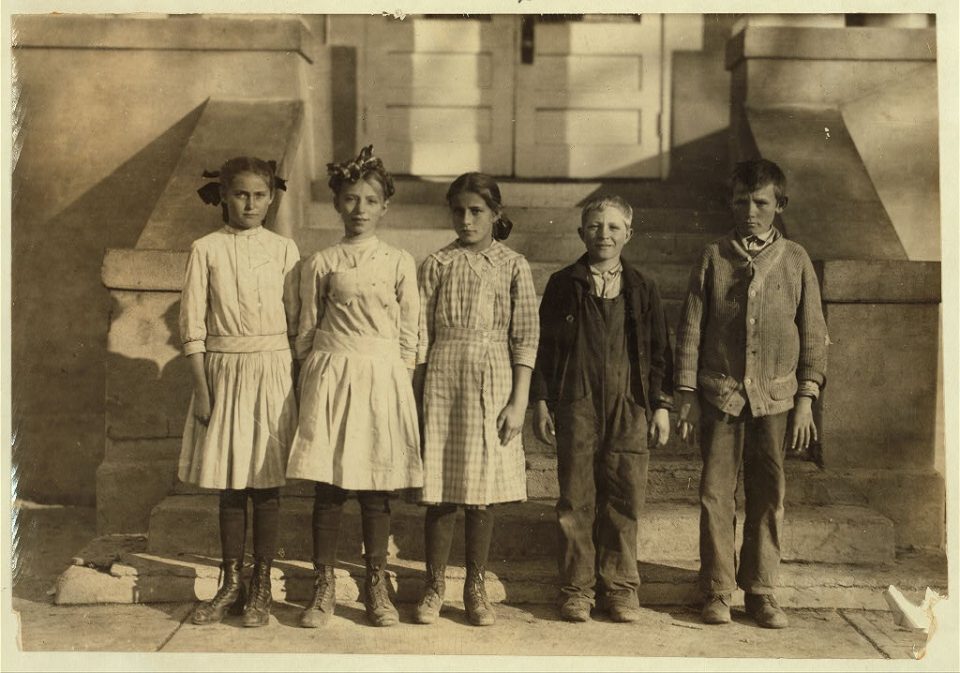 The caption on this Library of Congress photo reads: “These pupils – one 13 years old, one 12, one 11
and two 10 are in the second grade of the Rockwood Place School, December 1. The age in this grade should be 7 and 8 years. The teacher said the retardation of these pupils was almost entirely due to their absences on account of beet work. Location: Fort Collins, Colorado / L.W. Hine.”

Rockwood Place School was located on 9th Street (AKA N. Lemay), just south of the Andersonville neighborhood. Read more about the school in this post on Lost Fort Collins: Where Was Rockwood School? 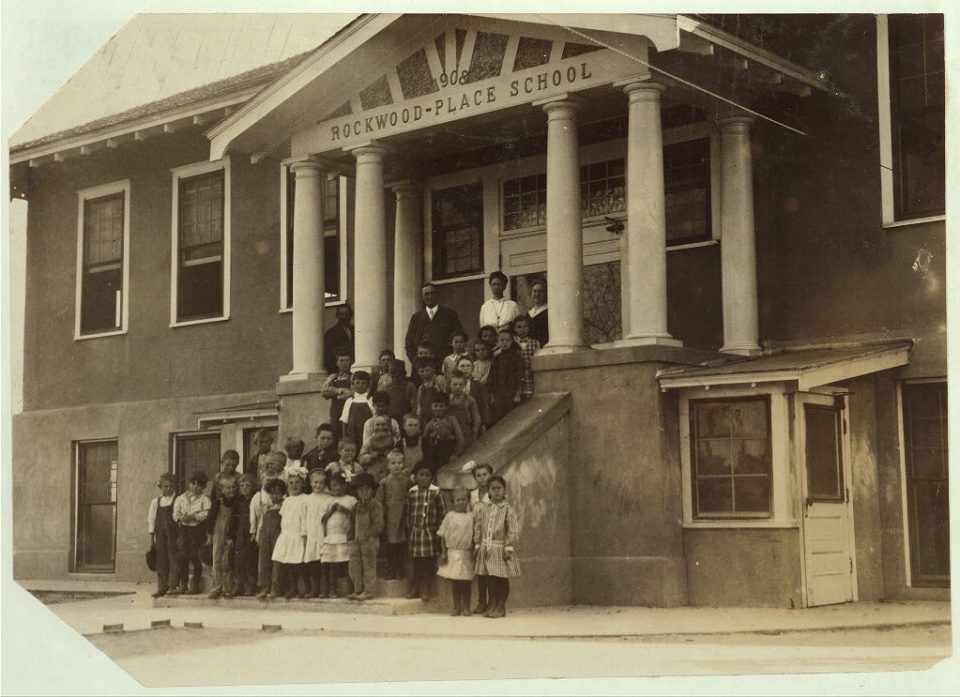 The caption on this Library of Congress photo reads: “Total attendance at the Rockwood Place School October 20, over 6 weeks after school opened. There were 40 present on this date, and over 150 are expected. 74 have been in attendance part of the time since school opened. Location: Fort Collins,
Colorado / L.W. Hine.” 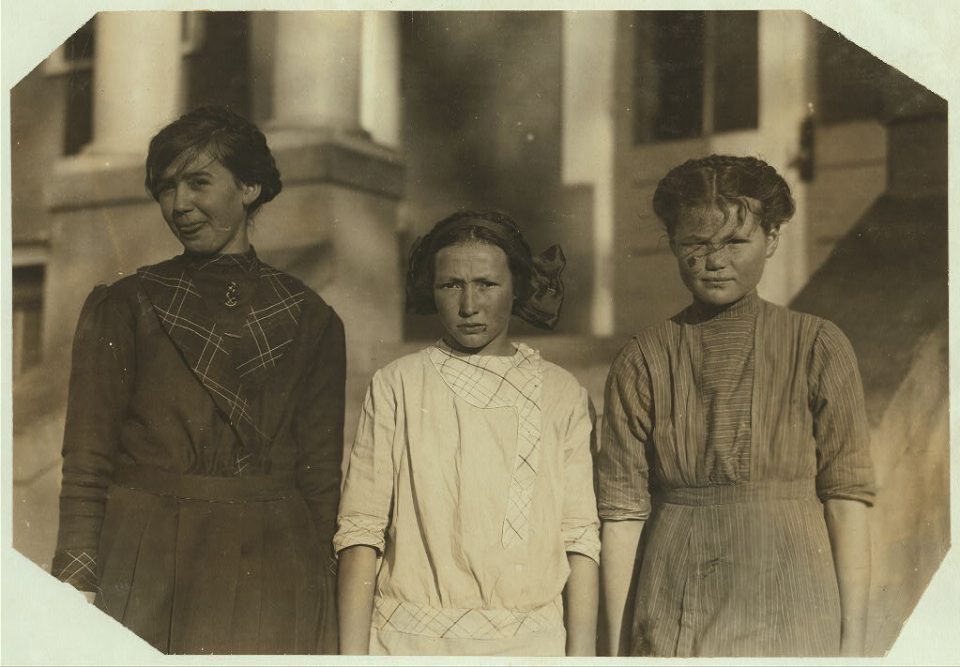 The caption on this Library of Congress photo reads: “Girls – one 14 years and two 12 years old in the
third grade of the Rockwood Place School. Some children 7 and 8 years old in this grade. Regular age is
8 and 9. Teacher says retardation is due chiefly to beet work.”
Photo taken by Lewis Wickes Hine in 1915.