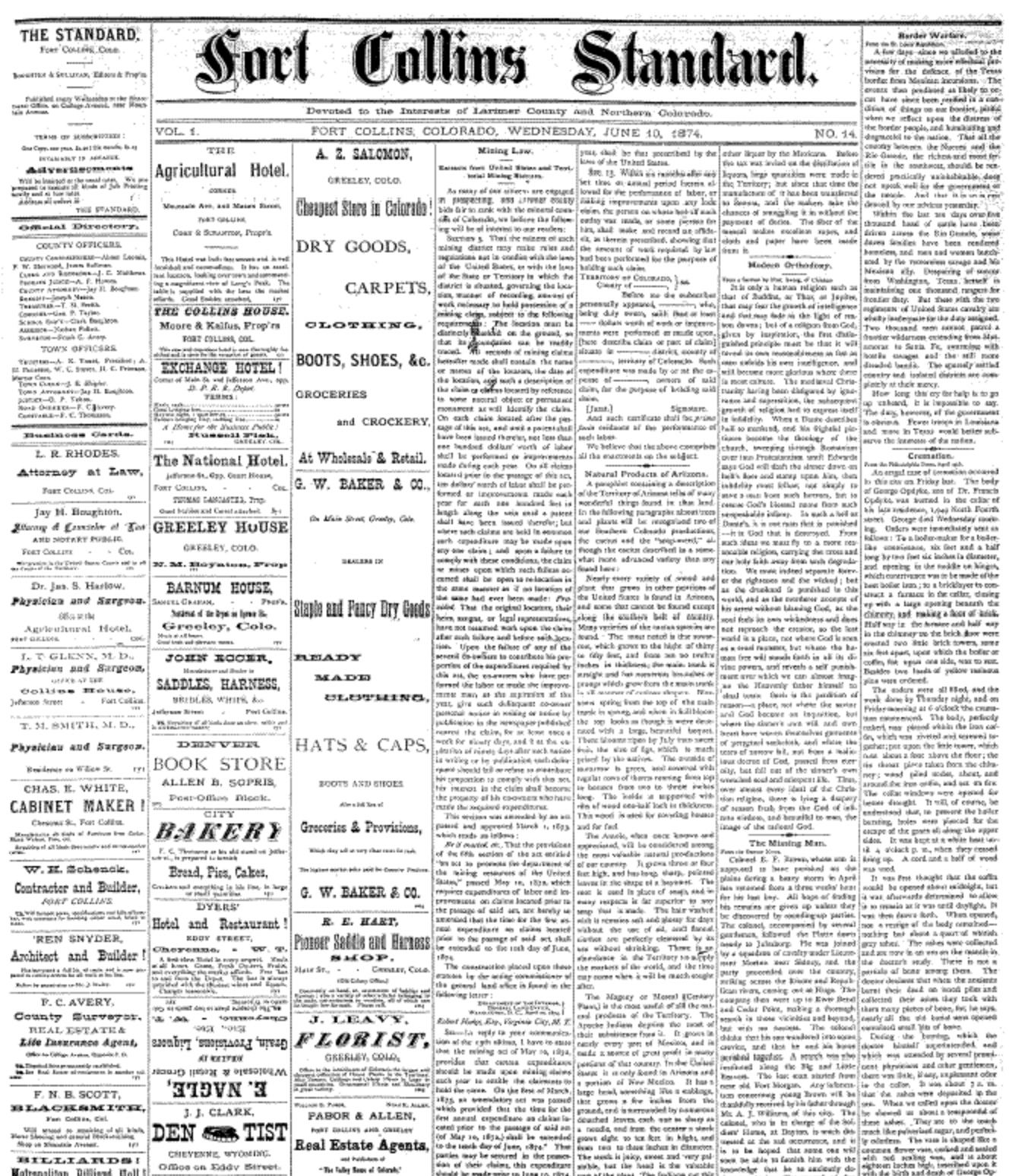 The front page of the news one hundred and forty years ago (plus a couple of days) included excerpts from the United States and Territorial Mining Statutes (remember that Colorado was still a Territory at that point), excerpts from a pamphlet on the Territory of Arizona, and excerpts of a sermon by Professor Swing of Chicago. Also on the front page was a story from the Denver News about the son of Colonel E. F. Brown that had been lost in an April storm on the plains. His father had just returned (to Denver) from a 3 week trip looking for his body. From the St. Louis Republican was an article on “Border Warfare” regarding the necessity of defending the Texas border from Mexican incursions. And from the Philadelphia Press (dated April 19th) was news of a man who had burned in his basement.

In other words, if all you looked at in the Fort Collins Standard on June 10th, 1874 was the front page, you’d think nothing ever happened in Fort Collins. 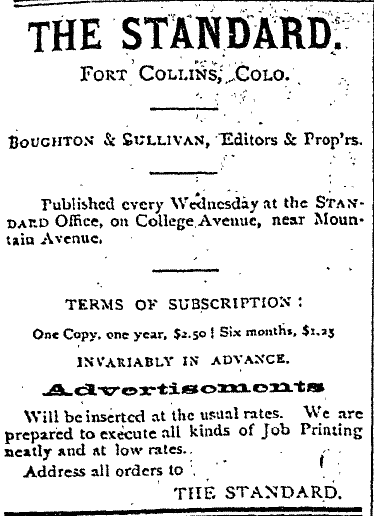 There was an article on the second page of the paper wondering how local funds were going to be raised for the Agricultural College to match the $1000 that had been paid by the federal government. (A matching grant was one of the requirements of having a land grant university here.) The college first opened its doors in 1879, five years after this newspaper came out.

There was also news that General Sheridan had heard word from General George A Custar [sic], stating that the Indians were out of control and were on the war path. 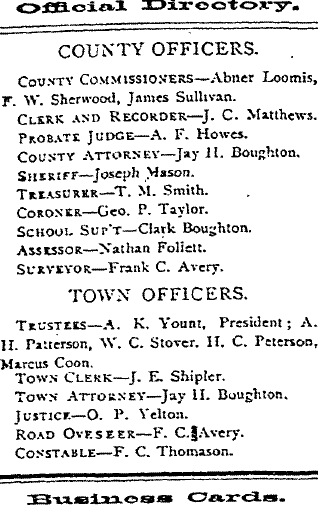 You’ll see a lot of familiar names in this list of who’s who in the newspaper. (Even if you don’t know who these men are, you’ll note several Fort Collins street names among this lot.)

Susan B. Anthony had been fined for “alleged illegal voting.”

And here’s a short blurb from the paper that I can’t make heads nor tails of: “There is a wild man around here who wants to put a patent head on ‘Nonpareil.'”

Ads for various hotels are in a prominent position on the front page of the 1874 Fort Collins Standard. (Note that they’re not just FoCo hotels being advertised.)

And here are some snippets straight from the paper. (They’re snippets in the paper as well. I didn’t leave out any context on these.) Finally there’s some local news!

“Mr. Jas. Conroy has purchased a lot adjoining his house on Sherwood street, and is already making improvements in the way of trees, etc. He will also build an addition to his house.”

“F. C. Avery, our new Street Supervisor, has graded Linden Street from Mountain Avenue to Jefferson Street in good style, putting in a bridge near Mr. Loomis’ residence. A new bridge has also been built under his supervision on College Avenue, over the outlet to Canal No. 3 — a much needed improvement.”

“Miss Mattie Gaylord did not seem to be appreciated here. She conducted her lecture on the gift plan, and distributed jewelry that cost about eight cents a million. Mattie would shine more lustrously as a biscuit shooter.”

“The ‘Calamities’ of Greeley are coming up to play a match with the ‘Standards’ next Saturday.” (in baseball)

More ads from the May 10, 1874 paper. You’ll note that none of the ads carry addresses. Some include street names, but for the most part, everyone knew where these places were or could find them by getting to the right street and then asking for directions.

The Fort Collins Standard, 10 June 1874. I accessed this newspaper through the Colorado Historic Newspapers website.