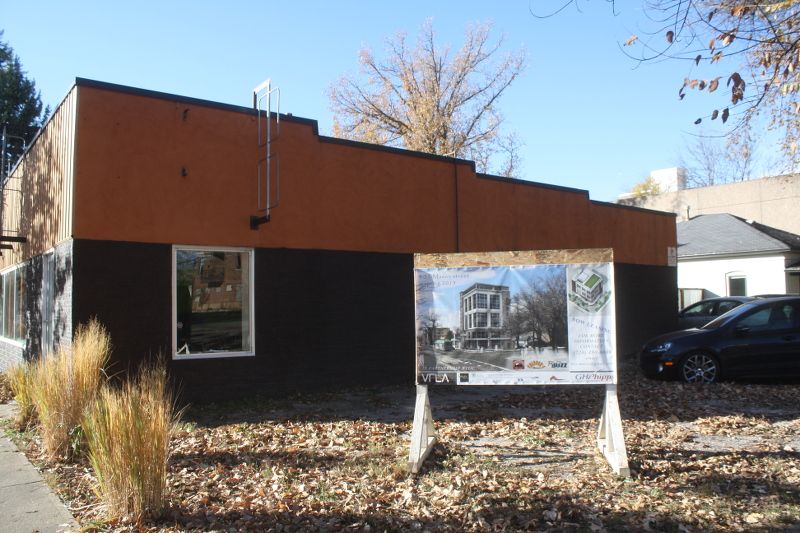 Fort Collins seems to be growing by leaps and bounds. No matter where you go, you’re likely to come across new construction taking place. In some ways growth can be stressful to a community. New blood often means an inflow of differing values, a mix of ideas, and sometimes new problems as well. Our current growth has brought us to a point this year where the city has a 1.6% vacancy rate (as compared to 5.5% in 2013). Low vacancy rates mean higher rental costs. (The average rental price on the north side of town now rivals the cost of an apartment in downtown Denver.)

This fast growth isn’t a new problem in Fort Collins. Between 1900 and 1910, the city grew by 169%!!! The 1960s and 70s were also periods of high growth that are reflected in the architecture we see in the Canyon Street area high rises as well as in all the suburban developments that took place during that time. (If you live in a Ranch or Split-Level house, it was probably built during this population boom.)

Growth is a good problem to have. And, if the development that comes with it is done well, it can lead to having a vibrant community for generations to come. Fort Collins is, and always has been, a rather forward thinking city. It was an early adopter of self-generated electricity, telephones, burying electrical lines, historic preservation, creating an extensive bike trail system, and preserving open space. In the same way, the city planning department has been forward thinking in terms of planning for growth before it happens. In 2011, the City Plan was published. (You can read more about the process in this November 17, 2011, New York Times article that the city reposted to its site.)

A document like City Plan takes a comprehensive look at Fort Collins as a whole. There are also more focused plans created for certain parts of town, like the West Central Area Plan that will soon be finalized. But it’s taking a step back and looking at the bigger picture that will help us to build a city that will not just grow in size and numbers, but also in terms of being sustainable, in having strong communities, and in creating a vibrant place to live and work.

I say all of this to introduce you to my third assignment from the Urban Design class I’m taking from Coursera. (The first assignment was on types of design already used in our city. The second was on three places with character.) This last assignment required us to look to the future and use some of the design strategies we’ve learned to try to address a current or looming problem, an opportunity, or a need. 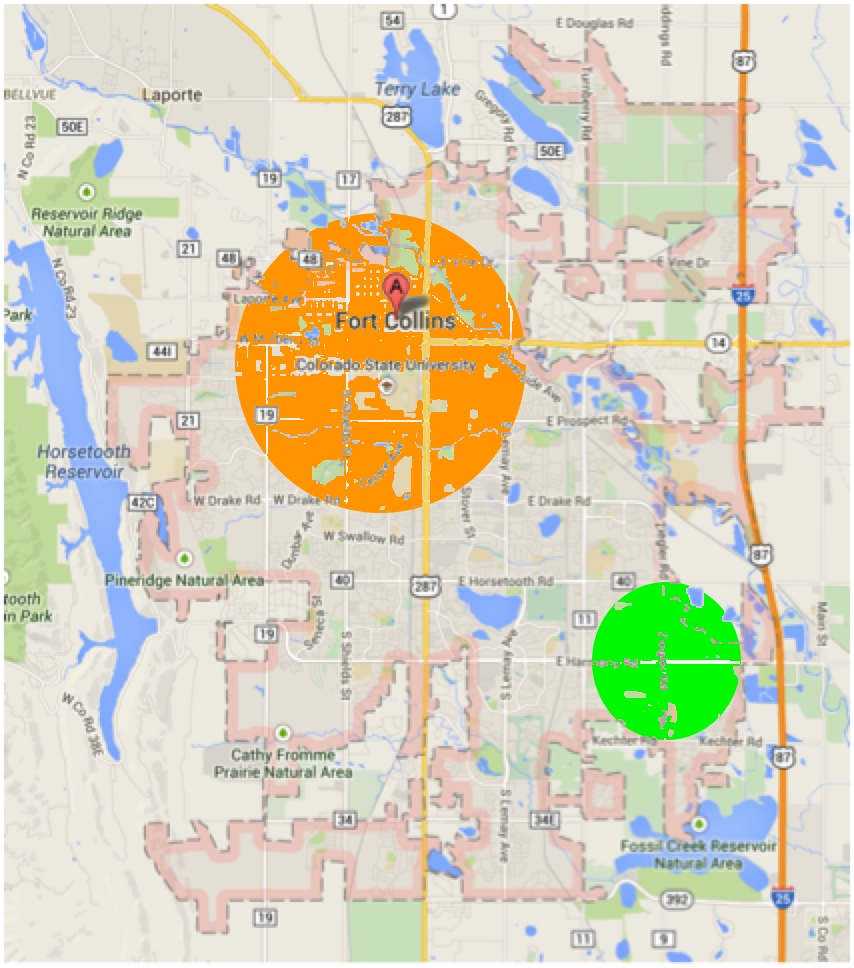 This isn’t the most beautifully done map, but I think it’ll serve its purpose. The orange circle indicates the most densely populated and most active part of Fort Collins right now. The green circle indicates the area that I think could use some growth in density both to bring needed amenities to the southeast side of town, but also to make the southeast end of town more of a destination as well as to provide room for growth within the city without it all being centered around CSU and Old Town.

I decided to focus my project around the southeast end of town, specifically in the area just east of Ziegler and Harmony.

The first step would be to improve transportation options to that area. It’s a great location for getting around by car, both because it’s along Harmony and because it’s close to I-25. But I often hear cyclists on the southeast end of town complaining about the lack of connecting bike trails.

The Poudre Bike Trail ends at Drake. There are plans to extend it to Horsetooth and then to run it towards Greeley. The Power Bike Trail is slated to connect up with Bacon Elementary, Kinard Middle School, and Zach Elementary, but that plan essentially skirts the area I’ve chosen to focus on. There’s a wide bike lane along Harmony, but not many connectors (other than regular traffic lanes) into various communities and shopping centers in the area. Cities used to be designed as Old Town was, with a grid pattern that made it easy to choose from multiple options in order to get from point A to point B. But southeast Fort Collins was built in a much more suburban style in which communities tend to be fairly self contained. While it may feel quite safe to bike within the community, each community empties out onto a arterial street with increased speeds and levels of traffic. So cycling goes from feeling safe to feeling iffy the moment the rider leaves a community. By connecting these communities with bike trails, cyclists could use the safety of the streets in the neighborhoods while avoiding the comparative stress of the arterials by using trails instead.

Tell me what the following things have in common: parades, beer festivals, music festivals, museums, tours, NewWestFest, First Friday Gallery Walks, Foodie Walks, and car shows? … They all take place on the north end of town. But why should Old Town have all the fun?! Fort Collins is getting large enough to have more than one nucleus of activity. Isn’t it about time the south side of town had a few attractions that northenders started heading down to? Isn’t it time that the south side had a few destination locations that draw in people and create a more vibrant sense of place for folks on this growing end of town?

I envision a public space that includes gardens, pathways, plazas, and a performance stage. It would be part of a larger retail/residential/office complex, but would be publicly used… much like Old Town Square and Oak Street Plaza are part of the larger Old Town commercial area, yet anyone can wander through the area, or find a bench or table and rest awhile.

A Fairly Grand Vision to Bring All This Together

Although specifics weren’t really important either for our project, nor for this post, because this isn’t a development that’s ever going to be built, I still decided to try to imagine some specific ways in which density could be achieved along with providing the public spaces that I imagined.

The first thing I learned is that I’m not an artist. Although I can picture the development in my head, when it comes to putting it on paper, I might as well be a kindergartener with a box of big crayons. 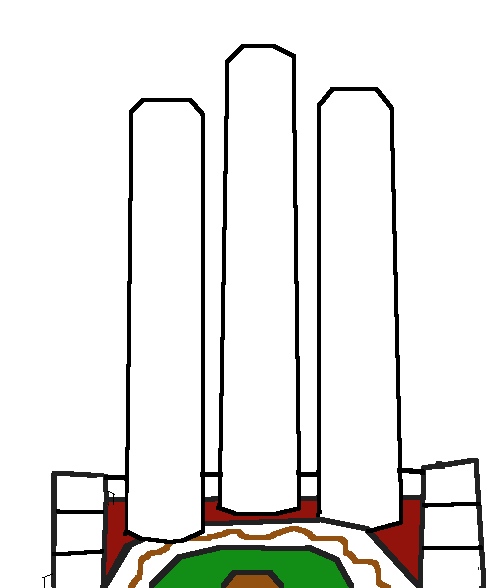 Three towers over a pedestal of public space and retail/office/parking space.

Like I said, I’m not so great at drawing my ideas. But the general thought is that there would be buildings around 3 sides of the block that would contain 3 story retail and office space. (The three stacked boxes on either side of my drawing represent 2 of the 3 sides of the block of retail/office space. Facing the project from the west side, however, the interior would gradually slope down to be level with the street – providing optimal views of the mountains throughout the public area.)  On the open end, at the ground level, would be a performance stage and a large grassy slope that gradually climbs up to the top of the first story. From the first story up to the second would be a series of gardens and pathways with benches and perhaps water features or other places for kids to play. That would gradually slope up to a plaza level that would be flat and would sit at the same height as the bottom of the third story office/retail buildings around the edges. Under the the garden area and the plaza would be parking that would be accessed from the east side of the development.

Upon the pedestal of public space, retail, etc. I envision three skyscrapers that would contain a hotel, restaurants, condos and apartments, day care, a fitness center, and office space. The top most levels would be a boon to the developers who would be able to charge premium prices to parties interested in buying restaurant space or penthouses on the top most levels. Right now when tourists come to Fort Collins, they aim straight for the Old Town area. But the south end of town could begin to pull in some of those tourist dollars with a top story restaurant with views that might well include looking clear into Wyoming as well as south to Pikes Peak and west to the mountains.

Part of our assignment was to explain who would have to be involved in the new urban design idea in order to bring it to fruition. Obviously the city would be involved in setting parameters for height, density, etc. And developers would be needed – either to take on the whole project (probably in two stages – pedestal first, then the towers) or to divide the project up into component parts with the public spaces being an amenity that all developers pitch in to complete. (The retail/office space could be broken into lots and built by various builders and architects, creating a modern day version of a shopping/office area like we have with Old Town. Old Town wasn’t created by one developer with a comprehensive plan, but by many developers over a period of time, which affects how it looks and feels.) But a third, very important participant in such a project would be investors. Early Fort Collins grew in large part because residents pooled their money into investment companies which then took that money and built ditches, mills, and other important projects within the city. A similar pooling of resources would be required (probably with banks or other large investors contributing the lions share) in order to pull off a project of this magnitude.

The real goal of our third class project was to use some design theory to solve a problem. But it was fun to imagine a project for Fort Collins that could change the way the city grows and is organized in the future. My solution may not sit well with those that like the small town feel that currently struggling to retain. But others might appreciate the chance to think big, or to add some buildings to our city that take advantage of the beautiful views, not only to the west, but also along the river and the reservoirs that would be to the east of this project.

I’d love to hear what kind of project you might think up to solve some of our city’s growing concerns. What design ideas do you have that would help to address our growing traffic projects? the insane rise in rent prices? the need for additional water and energy conservation? or other problem that you see?

And I emailed Ted Shepherd, Chief Planner with the city, regarding the current densities of various parts of the city. I had just assumed that the southeast end of town was the most sprawling. But he pointed out that with developments such as Scotch Pines, and with city code calling for smaller lot sizes now than it did back in the days when Mid-Town was being developed, the south end of town isn’t as sprawling as I had imagined.