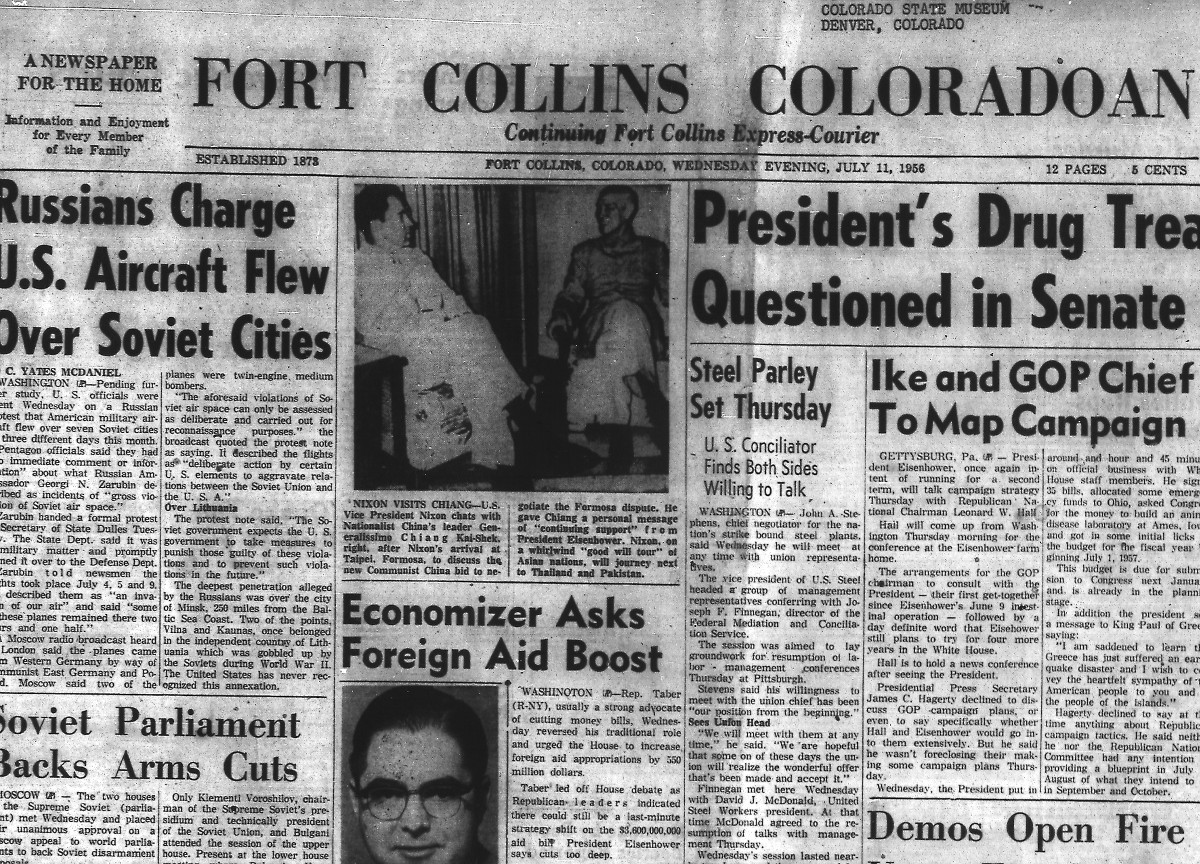 The front page of the July 11, 1956 Fort Collins Coloradoan.

In addition to some standard Cold War type news (the Soviets were whining about their airspace being compromised), the biggest headline went to President Eisenhower’s drug use issue. I know! What?! Ike used drugs?!! Well, here’s how things went down. A guy named Wesley D’Ewart had been nominated to be the Assistant Secretary of the Interior. And you know how it is when it’s nomination time. Every picayune little detail is blown into monstrous proportions in one party’s effort to overthrow the other party’s nomination.

Somehow in the course of discussing the D’Ewart nomination, the topic of “smear tactics” came up, which seemed to dominate the discussion from that point forward. First D’Ewart was asked if he’d had knowledge of Republican accusations regarding certain persons’ communist allegiances. That rolled into the fact that Eisenhower was being prescribed a medication called dicumarol, a blood thinner. Which bled into all sorts of concerns regarding Eisenhower’s need to be propped up with drugs in order to run in the upcoming election.

All of which just goes to show that bipartisan shenanigans are certainly nothing new. 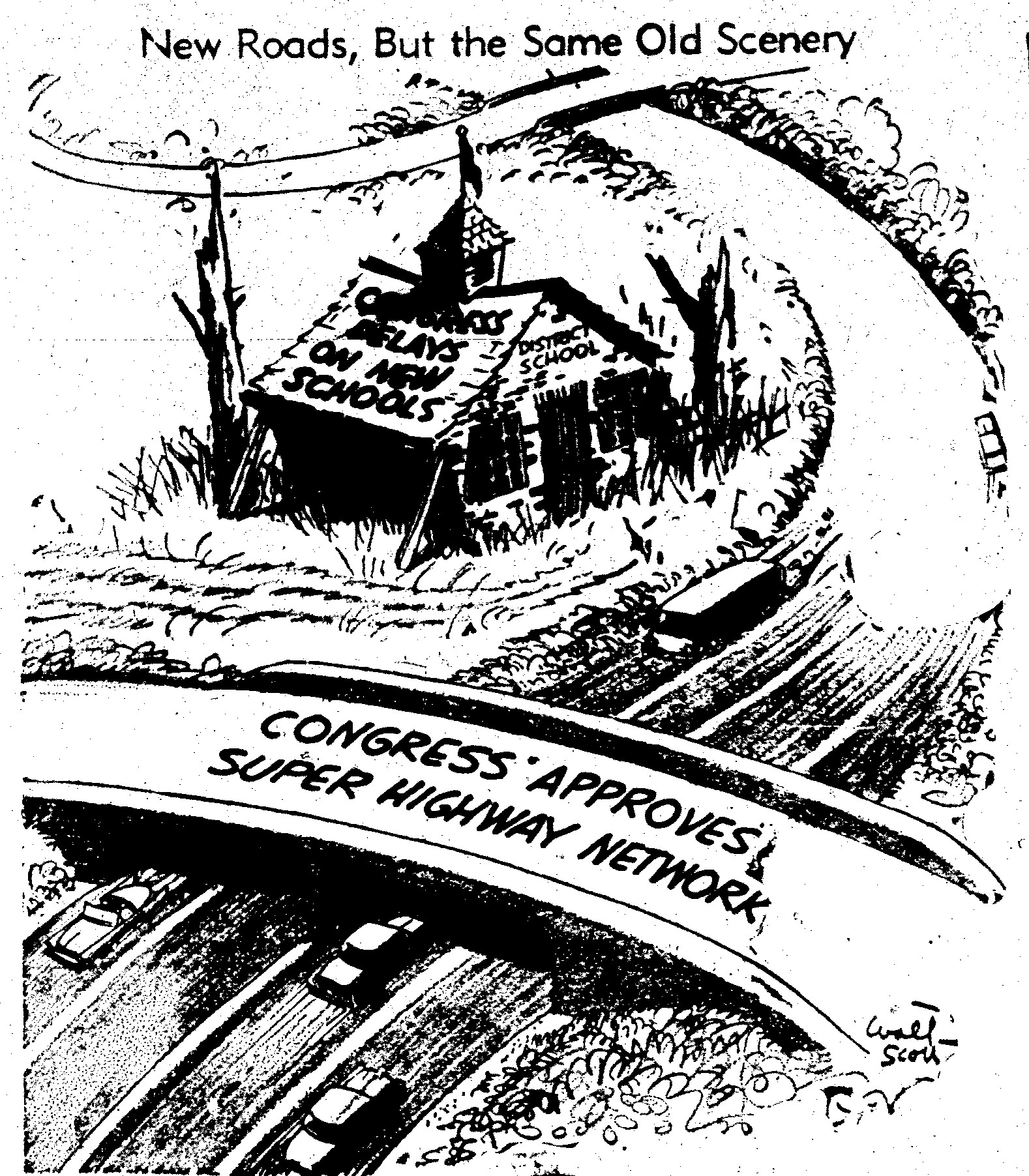 We take our highway system for granted today, but in 1956 it was seen as something that was taking tax payer money out of the schools where it belonged.

Steel workers were on strike. The GOP was beginning to discuss campaign strategy for Ike as he ran for a second term. 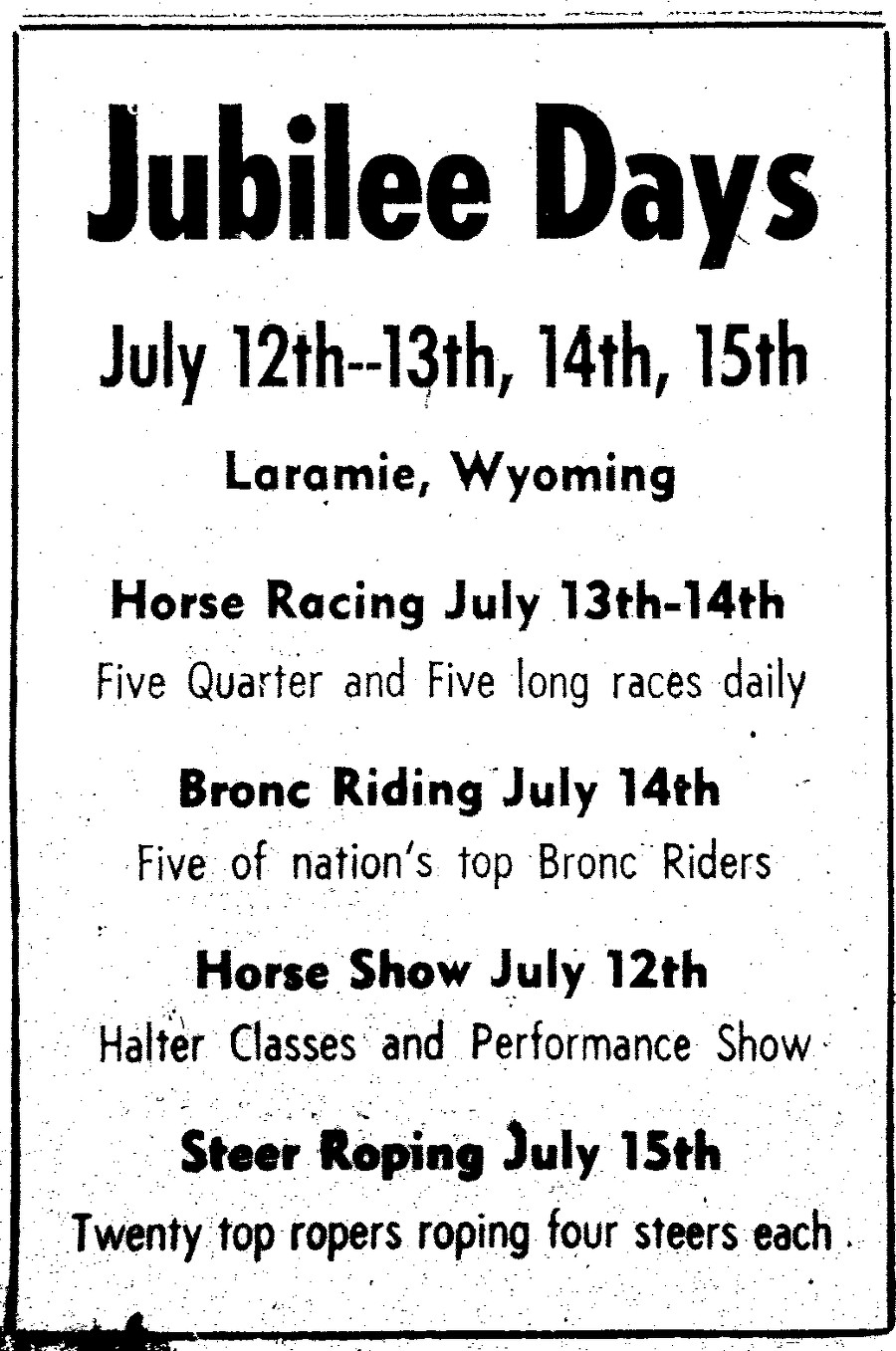 An artillery man who was traveling from Colorado Springs to Cheyenne for the Frontier Days celebration was thrown from his horse when a dog jumped out of a ditch and surprised the horse. The accident happened before the artillery man had even left Colorado Springs. The man suffered only minor cuts and bruises. 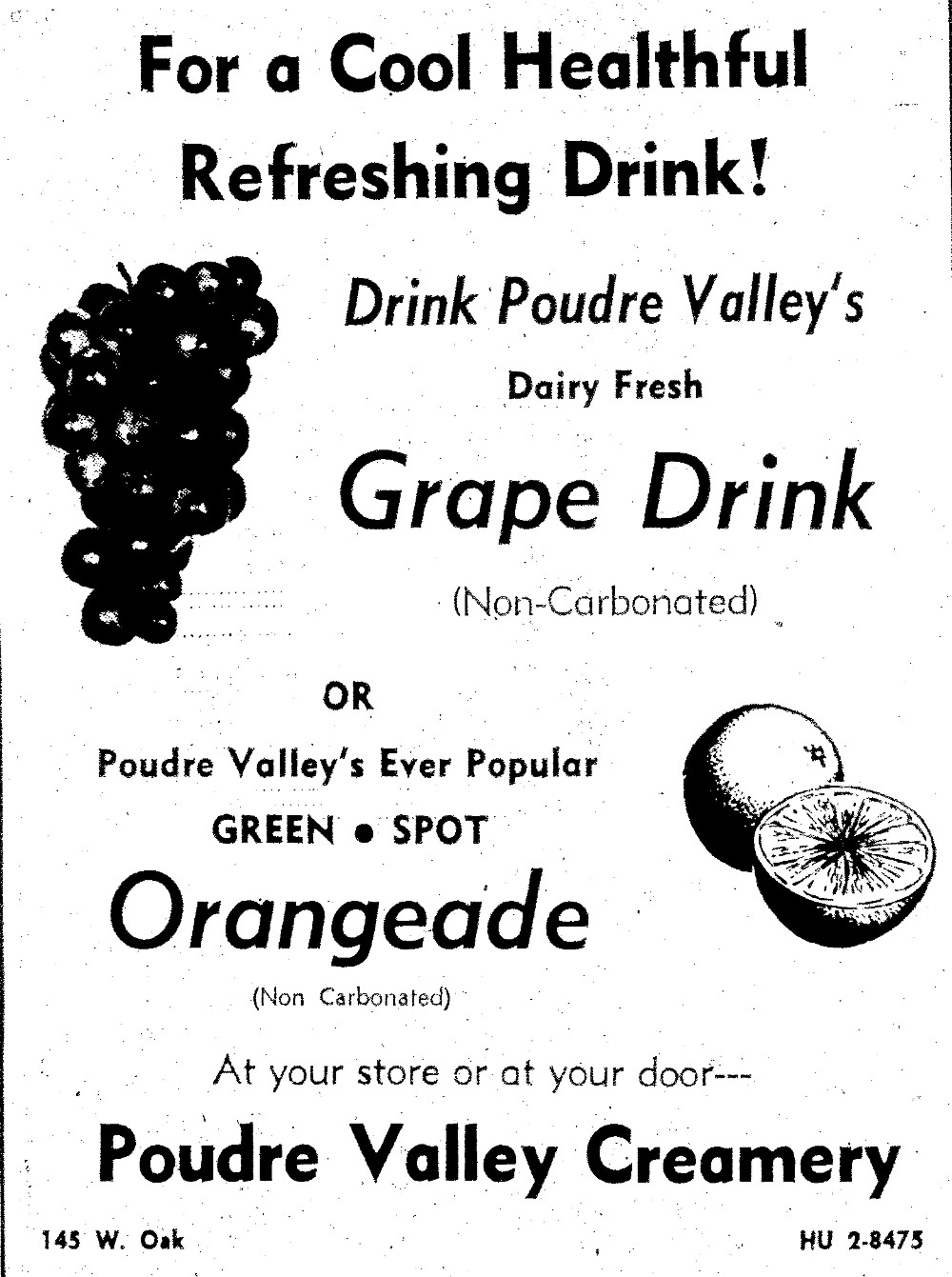 Fashion designer Ceil Chapman presented several outfits at a big show (not in Fort Collins) that were heavy laden with beads, sequins, and jewels.

This Roy Rogers comic shows how the Wild West was popular, but that space was the final frontier.

The Brownies were participating in day camp at City Park where they learned square dancing among other activities. 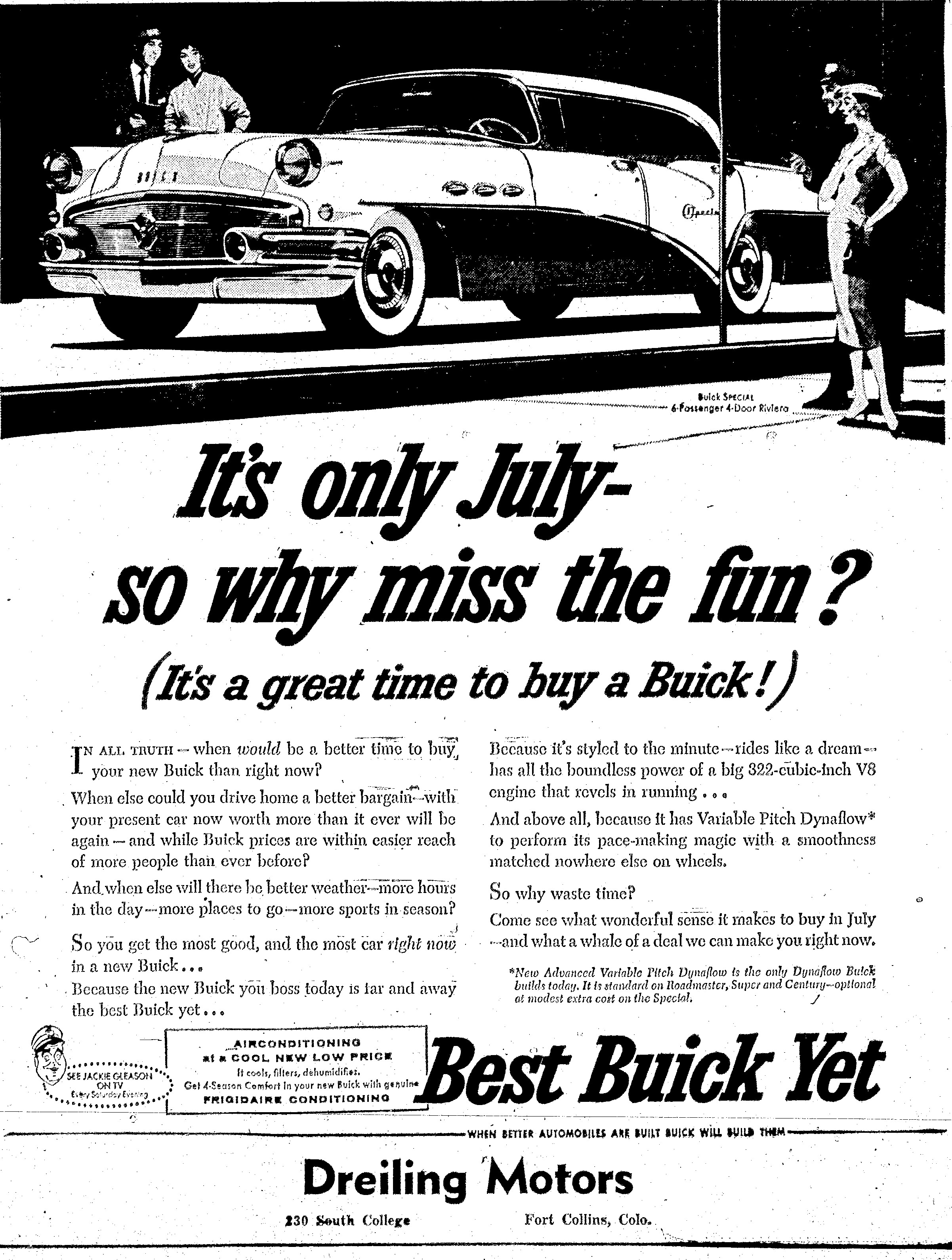 The Fort Collins Coloradoan, 11 July 1956. I accessed this newspaper from microfilm at the FCMoD Archive.