Ozzie and Harriet vs. Studentlandia 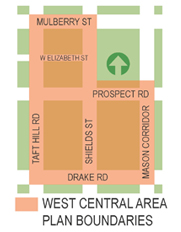 Simplified map from the 2014 study of the West Central Neighborhoods.

The city has recently decided to dust off its 1999 West Central Neighborhoods plan and give it an update. In an effort to get citizen input on the project, they held two meetings last week and will have two more this week. (See details below.) It seems like a fitting time to glance back at the history of these neighborhoods. In the 1999 plan, it was recommended that a “comprehensive cultural resource inventory” should be developed for these neighborhoods to “identify and preserve resources with historical, architectural and/or geographic significance, and to identify the significant historical characteristics of each neighborhood.” If that had actually been done, it would certainly have made the job of writing this post a whole lot easier. But it wasn’t, as far as I can tell. So I’m going to attempt to write a “short cultural resource inventory” of what I would like to call “The cozy neighborhoods of Ozzie and Harriet vs. Studentlandia.” 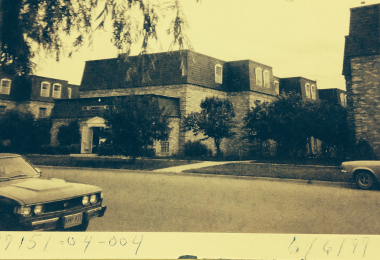 The 1999 report states that this part of Fort Collins has the highest population density of the entire city. That makes total sense when you realize that the area just west of campus is student-central (or Studentlandia, as I prefer to call it). There are a significant number of apartment complexes here, with more being built every day. (The District at Campus West is the largest and is currently under construction along the north side of Plum Street between City Park Ave. and Aster St.) This level of density is all the more significant when you realize that there are still sizable chunks of parks and open space integrated into the neighborhoods. (Red Fox Meadows, Fischer, and Ross Natural Areas and Rolland Moore and Avery Parks) 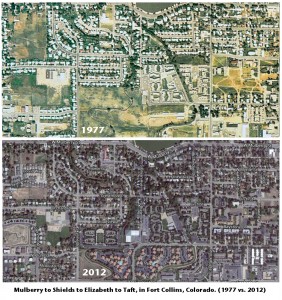 The northernmost portion of the West Central Neighborhoods shown in 1977 (top)  and 2012 (bottom). (Click to expand.)

Last year’s student block party in the Summerhill neighborhood isn’t the only riotous event in Studentlandia’s history. The 1987 riot in the Baystone neighborhood was so disastrous that CSU’s president, Philip Austin, permanently canceled College Days in Fort Collins. When all was said and done, there had been 124 arrests made and 100 people injured during that debacle.

But these West Central Neighborhoods were also the land of Ozzie and Harriet, of working class American families living fairly comfortable lives along streets where kids pedaled about on their banana bikes and neighborhood-wide events were a regular part of life — events such as BBQs and even a Saint Patrick’s Day parade in the Village West, Lexington Greens, and Foothills Greens area (between Taft, Stuart, Rolland Moore, and Drake). According to Ellen Long, as quoted by the Coloradoan in 1990, “Many of its [the neighborhoods just mentioned previously] original residents came to Fort Collins from Rochester, N.Y., to take jobs at the Kodak plant in Windsor. When we moved here, this was the end of town. This was all by itself.” These neighborhoods were established in 1972 and, on the west side of town at least, Fort Collins didn’t extend behind Drake Road. 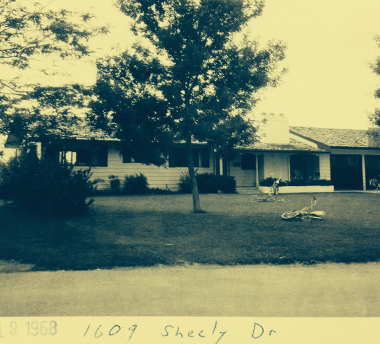 Elva Winslow lived in a neighborhood that in the early ’90s, when she was interviewed, had no official name. The Miller brothers (Alvin, Elliot, and Bruce) developed patches of land here and there between Prospect and Mulberry and many of those areas are now referred to as a “Miller Neighborhood”. But Elva lived in what would now be called the Avery Park neighborhood. When asked what the area was like she said, “It’s very dull.” But that was exactly what she liked about it. Many of the Ozzie and Harriet type neighborhoods have run through the whole cycle of life. Initially built between the the 1950’s and 70’s, families had moved in, children had grown and moved out, the neighborhood aged, and eventually new families started moving in all over again. I biked through these neighborhoods on Saturday and saw several families with young children as well as garages overflowing with kids’ bikes and other gear. In some neighborhoods it’s clear that Studentlandia has bled into areas that had previously been full of young working families. But the further south you go, the less Studentlandia holds sway. 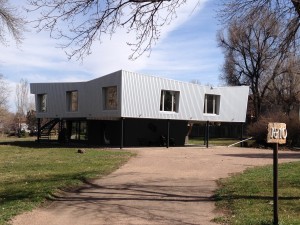 There’s some unusual architecture in these neighborhoods as well as the first locally designated residential historic district in Fort Collins. The house shown above is the Roger and Alice Steele residence. (Houses are often “named” according to either the architect or the original owners of the property.) Built in 1966, it is constructed of industrial materials, has an odd shaped roofline, and the second floor is resting upon stilts around the outer edge of the building. This property is not landmarked and will not be eligible for landmark designation for another 2 years. (Buildings 50 years old or older can be considered for landmark status.) It appears that the house is currently a rental. 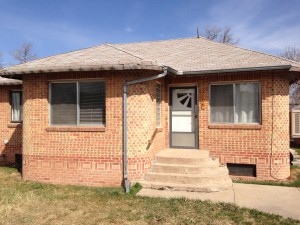 The house at 2106 S. Taft Hill Rd. has rounded corners, reminiscent of an Art Deco style. I couldn’t find anything online describing the architectural style of the house, but given the time the house was built (1944), the curved corners, the glass blocks to the left of the front door and the sunburst pattern on the door itself, it does appear to be an Art Deco house. The only other building in town that I can think of that is similar aise located at Howes and Laporte and is slated to be torn down in order to make way for the new city utility building. 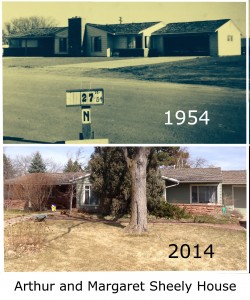 In 1951, Arthur Sheely, a partner in the Sheely-Andrews Motor company and a stalwart Republican that served as the Colorado Republican Chairman from 1941-47, bought 40 acres of farm land south of Prospect from Carl and Pauline Birky. The neighborhood that was built on the land is a great example of the burgeoning suburban movement in the United States after World War II. A section of the Sheely neighborhood was declared a local historic landmark in 2000, a testament to the architecture and car driven culture of the time as well as to the local businessman and civic leader, Arthur Sheely. Other important buildings in this area (that I know of) include: the Howe house that I mentioned last week (1314 W. Myrtle), the Emma Brown/Susan Winter House (at 720 W. Prospect), and the Olyn and Ann Price Property (1509 W. Westview Ave.). I’m sure there are more buildings that are significant either because of their architecture or because of who has lived in them, but they haven’t been landmarked so they’re not listed anywhere. If you know of a house that holds a significant piece of Fort Collins history, please tell us about it in the comments. 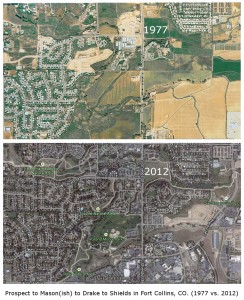 Most of the southern part of the West Central Neighborhoods shown in 1977 (top) and 2012 (bottom). (Click to expand.)

I have only begun to scratch the surface of what makes these West Central Neighborhoods unique and an important part of Fort Collins’ history. I haven’t even mentioned any of the retail developments, churches, or the farm ditches that wend their way through this land. Hopefully I’ll be able to dive deeper into specific areas within these neighborhoods in the future. If you live in one of these neighborhoods, or if you grew up in one of them, I would love to hear your stories. Please leave comments below.

Sources for this article: The simplified map of the West Central Neighborhoods is from the city website regarding the study that is currently underway. For more information visit the West Area Plan page. Info on upcoming meetings is as follows:

The 1977 aerial images of the city came from the Fort Collins Archive online. The 2012 satellite shots are from Google Maps. A little of the history of College Days came from the CSU police department website. A description of the St. Patrick’s Day parade and other neighborhood festivities can be found in “‘Fertile Valley’ bursting with kids’ 19 kids” by Kevin Vaughan, in the Coloradoan on August 13, 1990. For more information on the Steele residence, check out the architectural inventory form about the property. Cat, of Lost Fort Collins, wrote a very brief description of the Sheely neighborhood. For a far more indepth review of the architecture and historic value of the neighborhood, I’d encourage you to read through the local landmark designation form (pdf) on the neighborhood. The photos of the Cambridge House Apartments, 1609 Sheely Drive, and 1608 Sheely Drive all came from old assessor’s records that I had access to through the Fort Collins Archive. I collected scads of old photos and then biked around and got photos of the same houses today. But I’ve run out of space to post them, so… looks like there will be a West Central Neighborhoods Part II coming to a blog post near you some time in the future. For a list of all the landmarked properties in Fort Collins, check out the designation list. Two of the three properties that I list at the end are taken from that list. Outside of the Sheely neighborhood, there are only those two protected properties, despite the fact that there are potentially hundreds that are eligible for historic protections.