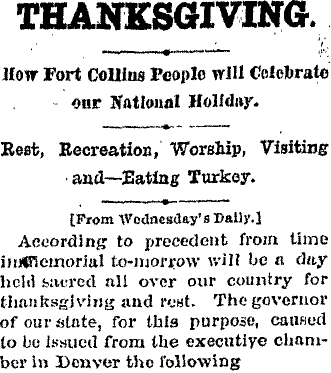 The beginning of a description of Thanksgiving in Fort Collins from the December 2, 1882 Fort Collins Courier.

In the 1800s, the Thanksgiving holiday in Fort Collins always began with a dance party. Though various people or groups would host the dance from year to year, and though it was sometimes held in another nearby town, there was always a dance on Thanksgiving Eve.

“A grand Thanksgiving ball will be given at the Mountain View Hotel, La Porte, Wednesday evening, Nov. 25th. Tickets, three dollars. The managers are M. E. Hocker, E. N. Garbutt, P. Huffsmith, Js. Trimble, Julius Marx and George Stearley. The affair promises to be a asuccess, and we hope Mr. and Mrs. Moreau will be favored with as many guests as they can accommodate, which will be a large number.” – November 11, 1874, Fort Collins Standard

Thanksgiving Day started with a joint service between the Protestant churches in town, followed by a turkey dinner. Over time, local restaurants started to serve elaborate Thanksgiving meals with consommés, trout and salmon, turkey with oyster sauce, cold tongue, leg of lamb, shoulder of lamb, elk with currant jelly, tendons of veal (Tendons of Veal a la Villerio, to be precise), lobster salad, and pinions of fowl among many other dishes. And for dessert there was a variety of ice creams, pies, and even one dessert called “sherry wine jelly” (which sounds like jello shots to me). 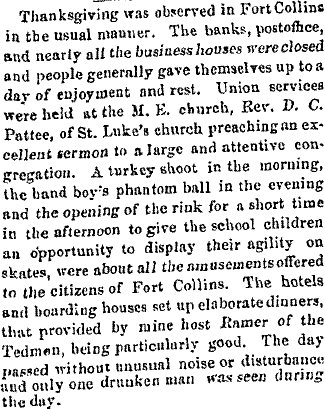 Nearing the end of the 1800s, mentions of games, ice skating, and other events started to creep into descriptions of the day. And it appears that most stores would shut down on the holiday, although there are hints that a few remained open, at least for part of the day (most likely in the morning, from the sound of it).

In the November 21, 1901 paper there’s a cryptic note that suggests the high school and the college squared off for a football game on Thanksgiving day. The note says: “High School vs. C. A. C. Thanksgiving.” (C. A. C. stands for the Colorado Agricultural College.) It’s purely a guess on my part that this refers to a football game. Feel free to weigh in on what you think it might mean. 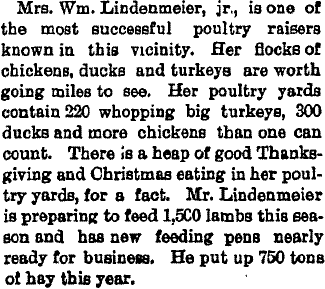 There are a few funny references in the paper to the fate of the poor turkey at Thanksgiving.

“The execution of the Thanksgiving turkey has been legally fixed for November 25. It is presumed he will die game. The offense for which he has been sentenced to death is that he is fat, juicy and tender and a vain-glorious bird, given to wearing a red hat and making a great display of his apparel.” – November 18, 1903, Fort Collins Weekly Courier 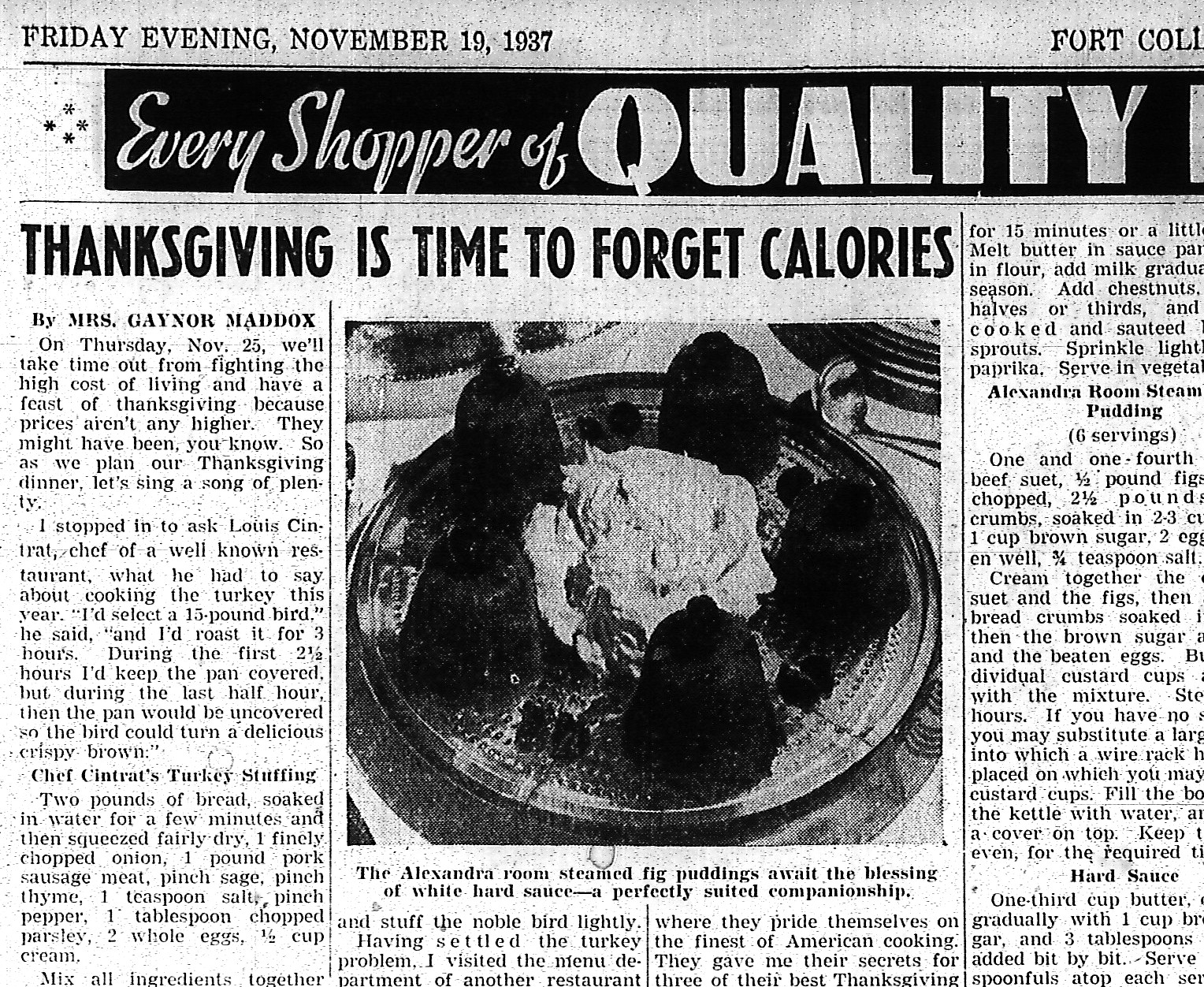 Sentiments around holiday weight gain appear to be much the same
today as they were three quarters of a century ago.

During the Great War, Americans were concerned for their soldiers overseas. The Fort Collins Weekly Courier headline on November 30, 1917 read “Turkey and Trimmings Reach Sammies in France.” (“Sammies” was a nickname for American soldiers who had been sent over by Uncle Sam.) 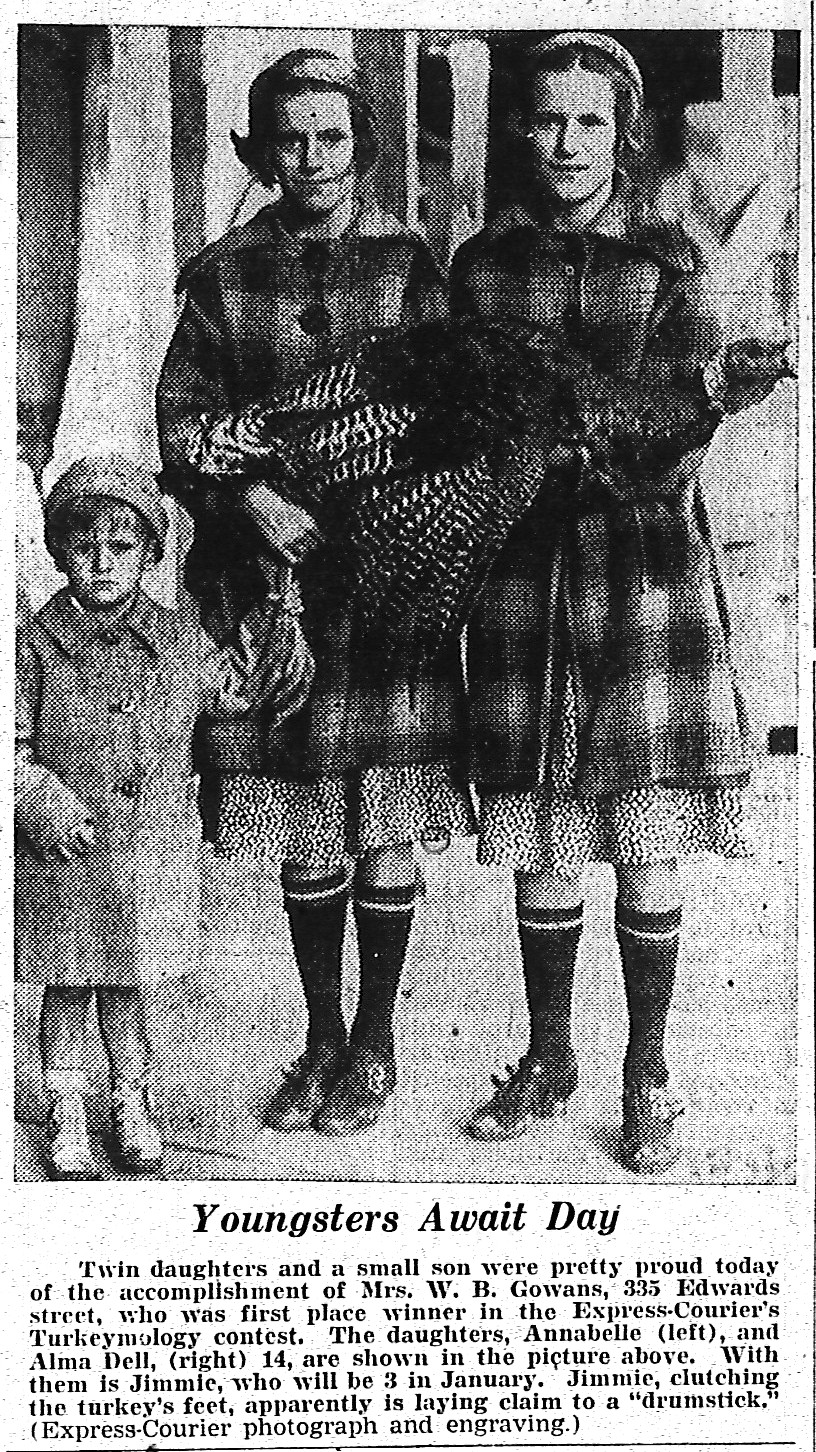 The winners of a Turkeymology contest in 1937.
From the November 24, 1937 Fort Collins Courier-Express.

My Own Thanks Giving

I have now been blogging on Forgotten Fort Collins for 9 months. I’m thankful for all that I’ve learned, both from research online and in the Archives as well as from all the folks I’ve had the pleasure to meet through the blog and social media. I love hearing family stories that have been passed down through the years. It brings history to life when you’re talking to people who lived through it, or who talked face to face with those who did.

I’m thankful to Jim Burrill who has been abundantly gracious in sharing the photos and stories of his Grandma Ruth, Uncle Art, and other family members.

I’m thankful for Wayne Sundberg and Joan Day who have been faithful attendees to the Forgotten Fort Collins Coffee Klatch and who have been excited about the work that I’ve been doing here.

I’m thankful for everyone in the “You know you grew up in Fort Collins, CO if you remember…” group on Facebook. This group is a wealth of information, stories, photos, and opinions (Yes, opinions. They’re an important reflection of our cultural bearings.) and I learn so much from the posts and discussions.

I’m thankful to Kristin Mastre who started the Scoop Blog Network and who is a great encourager to all of the bloggers in the network. I’ve been blogging on my own for years, but blogging as part of a network is a totally different experience. Being part of a team and a larger network keeps me blogging regularly and encourages me to create a better product.

I’m thankful for Jayne and Lesley at the FCMoD Archive and Vicky at the CSU Archive & Special Collections, all of whom have helped on numerous occasions with various stories I’ve been researching.

I’m thankful for Marcie (of Virginia Dale) and Virginia (of the McCarty-Fickle House) for their support and encouragement of the “History Now” newsletter that I send out monthly.

I’m thankful for all my regular readers who embarrass me with praise when you see me. It really lifts my spirits. Thanks so much!

I’m thankful for my husband who works his butt off so that I can stay at home blogging. I haven’t gotten paid a penny for any of the work I’ve done, and while I love what I’m doing, it’s only because of my husband’s hard work that I’m financially able to continue.

And last of all, but most importantly, I’m thankful to God for his mercies and abundance to my family this year. Despite trials and stresses, it is clear to me that I, my husband, and my children are all growing in strength, in wisdom, and in understanding. Although I think we’d all agree that we would rather have grown through less stressful circumstances, I suspect we wouldn’t have learned as much, or grown as much, without the trials through which we’ve walked. And in the end, we’re better people for it.

God bless you, and may you all have a restful and thanks-filled Thanksgiving holiday.

All of the food items offered by local restaurants mentioned above were from the November 24, 1881 Fort Collins Courier listing of offerings from the Tedmon House and the Windsor Hotel.

All newspaper quotes were accessed through the Colorado Historic Newspapers site. And the two clippings from 1937 were from the microfilm collection at the FCM0D Archive.