The Epic of Larimer County

After World War II, northern Colorado began to see a lot of growth and change. This was particularly true in Fort Collins where the G.I. Bill brought an influx of veterans who attended Colorado A&M. As the city grew, there was an increasing sense that the history of the area was being lost. The younger generation, and the new folks arriving all the time, were changing the feel of the town. It was during this time, the middle of the twentieth century, that many history books were written in an effort to retain a connection with our quickly fading past. Today I take a look at one of the earliest of these history books. 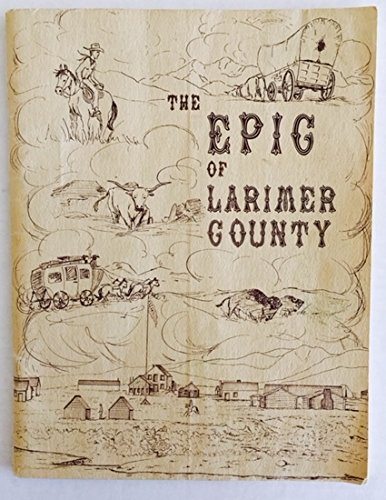 The Epic of Larimer County, by Shirley Rietveld Parrish. ©1959

Published in 1959, the Epic of Larimer County is a historic artifact in its own right. I found the book on the local history shelf at the Old Town library (which didn’t exist when the book was written). It’s a short read and comes with lots of wonderful old ads (from 1959) and older photos (which are now in the keeping of the Fort Collins Archive, but I don’t think that existed at the time of the writing of this book either). The advertisements were interspersed throughout the stories in a magazine style format to help pay for the printing of the book.

The book was written in the first person… from the point of view of Larimer County (which I have to admit, I found quite annoying). After sections of historic prose, the narrator would say something along the lines of, “I remember when…” and launch into a somewhat fictionalized story that, I suspect, was meant to bring history alive. Given that the 1950/60s were the height of our national love of all things cowboy (think John Wayne and Roy Rogers), the stories in this book were well suited to delight the readers of the day. There’s a particular focus on the foibles and follies of our wild and rugged predecessors. 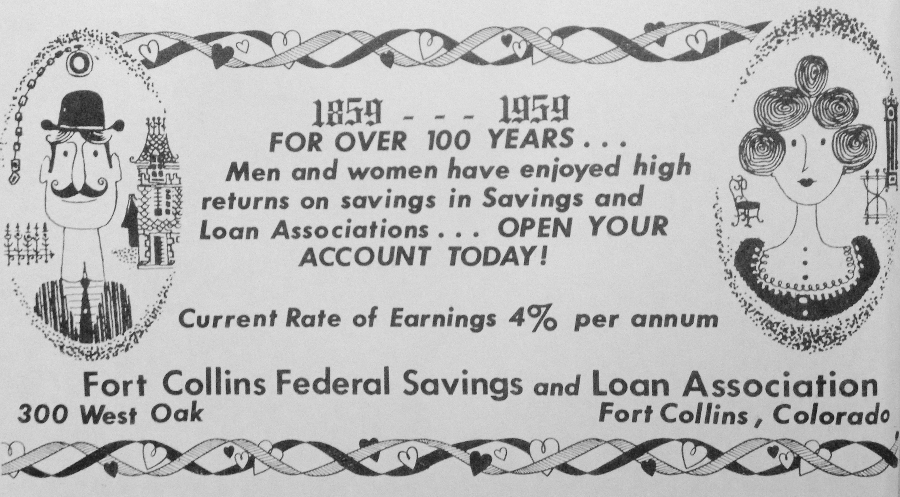 Nevermind the fact that Fort Collins wasn’t even in a twinkle in the Federal government’s eye in 1859, Fort Collins Federal Savings and Loan Association was there. (Ad from the Epic of Larimer County.)

The book starts with the naming of the Cache la Poudre river, which the author placed in the year 1836. (However, as I’ve mentioned in a previous article, some historians take issue with that date.) It then proceeds to tell the stories of such well remembered characters as Mariano Modena, Joseph Mason, Jack Slade, Charley Clay (The book makes Charley out to be a good cook, but a bit of a fool. The racist sentiments of the 1950s pop out on occasion in some of the stories, most notably in Charley’s.) and Lady Moon. 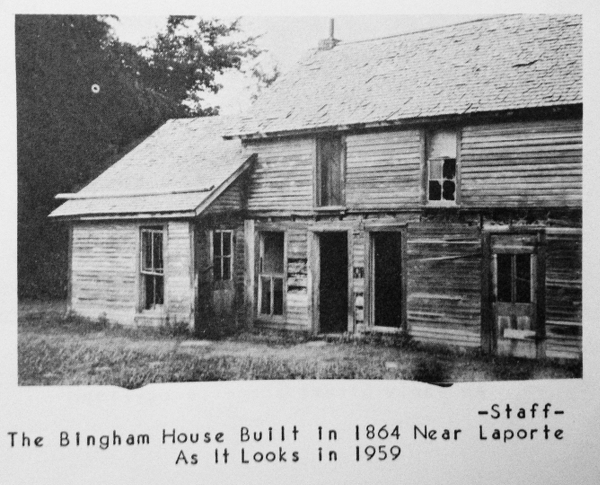 The book also covers some stories that I’d never heard before, such as the raucous tale of Charles Cradock, the Englishman who, upon receiving his twice yearly stipend from England, would host lavish parties. One such time, in the 1870s, he rented a railway boxcar, drank and partied all the way down to Denver with friends, tore up a hotel room at the Brown Palace, then rip-roared all the way back home in the same train car. 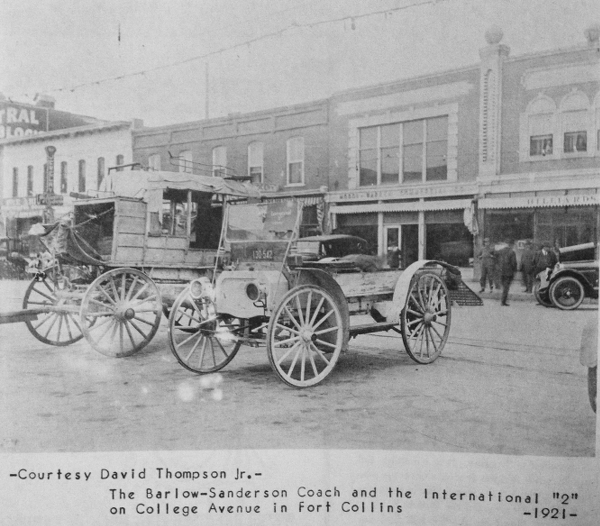 There’s also a story of Frank Miller, and his bear named Teddy. They headed up to a bar in Laramie (Fort Collins was a dry town, even past the point of the writing of this book.) and both Frank and Teddy had a beer. When Teddy was done, he’d pound the bar for another.

Frank discovered that a friend of his had placed bets on a horse, only to discover that a much faster horse had been brought in from out of town. He was despairing that he would lose all his money. So Frank drove Teddy over to the side of the stalls where the interloping horse was stabled. At the smell of the bear, it began to buck and whinny. Frank and Teddy left and found a spot on the bleachers (with quite a bit of space around them and the next nearest by-stander). At the smell of the bear at the race, all of the horses refused to run except one, the one belonging to Frank’s friend. It turns out his horse was used to Teddy and his smell. 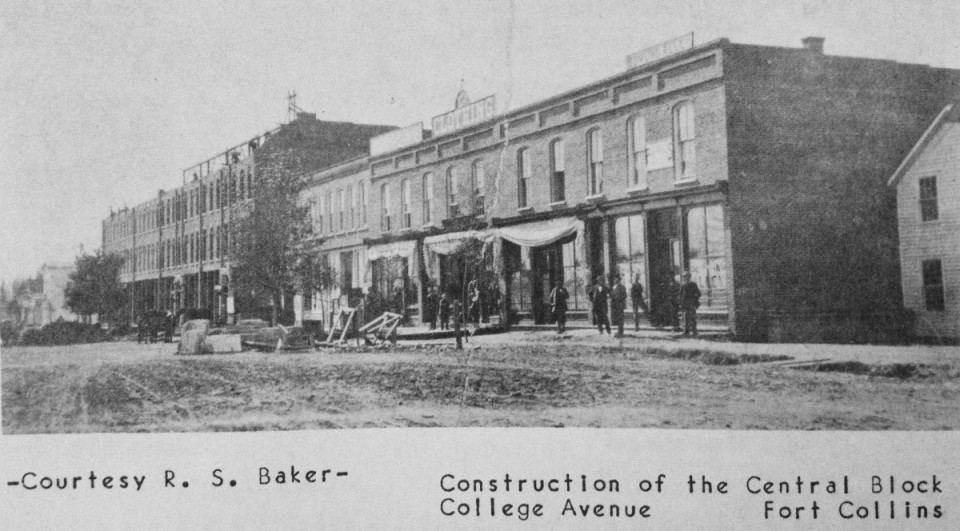 The author brings her tale right up to what was, at that point, the present day, with the building of the Pioneer museum, the completion of the Horsetooth Reservoir, and Miss Chardelle Hayward of Fort Collins representing Colorado in the 1951 Miss America pageant. There was the placing of the Statue of Liberty in Loveland by the Boy Scouts of America in 1954 and a similar statue placed in Fort Collins by the Scouts in 1955. In 1957, Colorado A & M became Colorado State University, “although many people still refer to the school as ‘Aggies.'” And on July 3, 1959, a new group called the Fort Collins Improvement Association, Inc. met with officials from the Colorado & Southern railroad to discuss moving the tracks off of Mason Street, where they were the cause of not only traffic problems, but also considered a blemish to the University and a hazard in case of fire.

And so ends the tales as told by the anthropomorphized Larimer County.

With the exception of the supposed identity of the narrator, I found this book to be a charming read, and I particularly enjoyed the selection of old photos that was included. Some of the pictures I had seen before, but only at a much smaller size on the FC Archive online. And some were entirely new to me (such as the two photos of College avenue above and the old shot of 4th Street in Loveland).

This high tech company was using two way radio in order to give the best possible service.

I really enjoyed the advertisements as well. A few of the Fort Collins businesses wanted so badly to claim that they’d been around for 100 years, that they just outright said so, even though Fort Collins wasn’t even a hundred years old yet. The City’s centennial was still five years away. And commercial businesses (with the exception of the sutler’s stores) didn’t come about until a few years after the founding of the Fort. So the businesses were clearly stretching their point. Even if they were hoping to count 100 years from the official start date of Larimer County, they’d still have to wait another couple years. 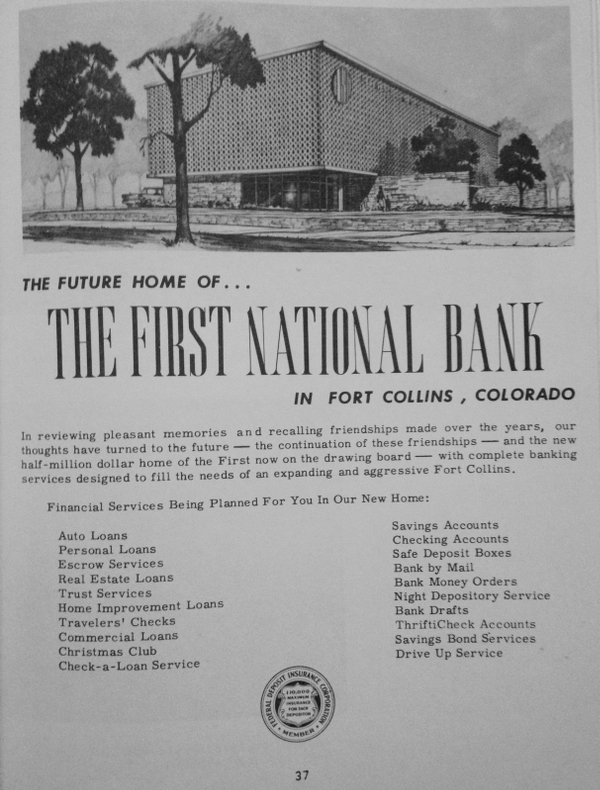 Some companies wanted to show off how ultra-modern they were with fancy gadgets like two-way radios or new buildings that flaunted the latest styles in architecture. The building above was being proposed in 1959 and was eventually built at the corner of Oak and Mason in the early 1960s. The First National Bank tower was added later. And the above ultra-modern building received a makeover about ten years ago… so it wouldn’t look so outdated.

The Hansen’s Cafe ad reminds the reader that liquor isn’t available in Fort Collins in 1959. 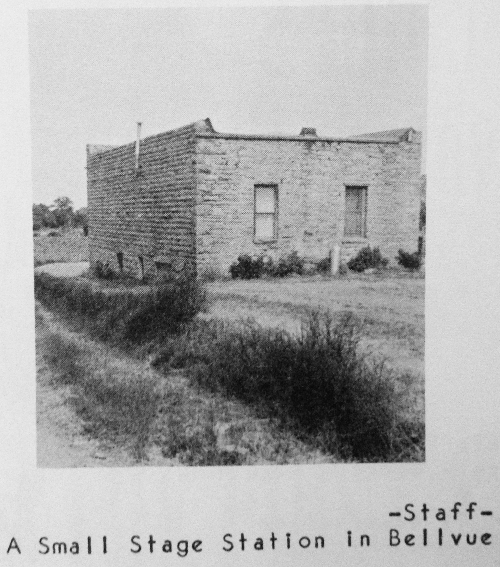 I include this picture here only because I found it odd that, in showing the Bellvue Grange in the book, they used a photo of the back of the building! 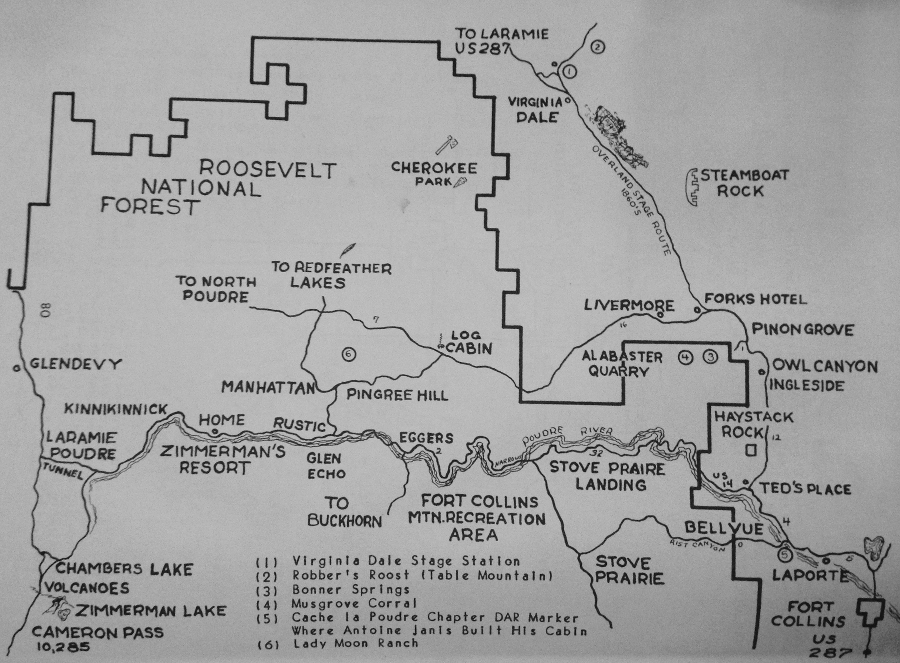 The book ends with a couple of maps, neither of which show anything south of Timnath despite the fact that Larimer county still extends several miles further south.

I found this book available in paperback online at very reasonable prices, but, unless you’re a collector of old history books, I’d recommend just checking out the Old Town library’s copy. It’s a fun read and the pictures are a pleasure to look through.