The Story of Emma Malaby

Passers-by on North Meldrum Street often see the “Emma Malaby Grocery” and they ask with interest who the person actually was whose name is on the front of this old building. Emma Alice Collamer Malaby was born on December 12, 1879 at the Collamer homestead near Ted’s place in Larimer County. Her parents were Frank A. Collamer and Achsah Alice Hulse Collamer. Emm went to school at the nearby Pleasant Valley School which still stands on the property of the Graves family, the ones who own the dairy. A number of the Collamer children attended that school. Frank Collamer had a large family which consisted of 8 children. Emm married Ross Malaby, another pioneer family who had a homestead south of Bellvue, Colorado. Emm was very young, maybe 18 years of age at the time of her wedding to Ross Malaby. Ross was a cowboy, worked as a ranch hand on several different large spreads in Larimer County and Laramie County in Wyoming. Ross’ father, Calvin Malaby, was a Larimer County pioneer, homesteading in Soldier Canyon. 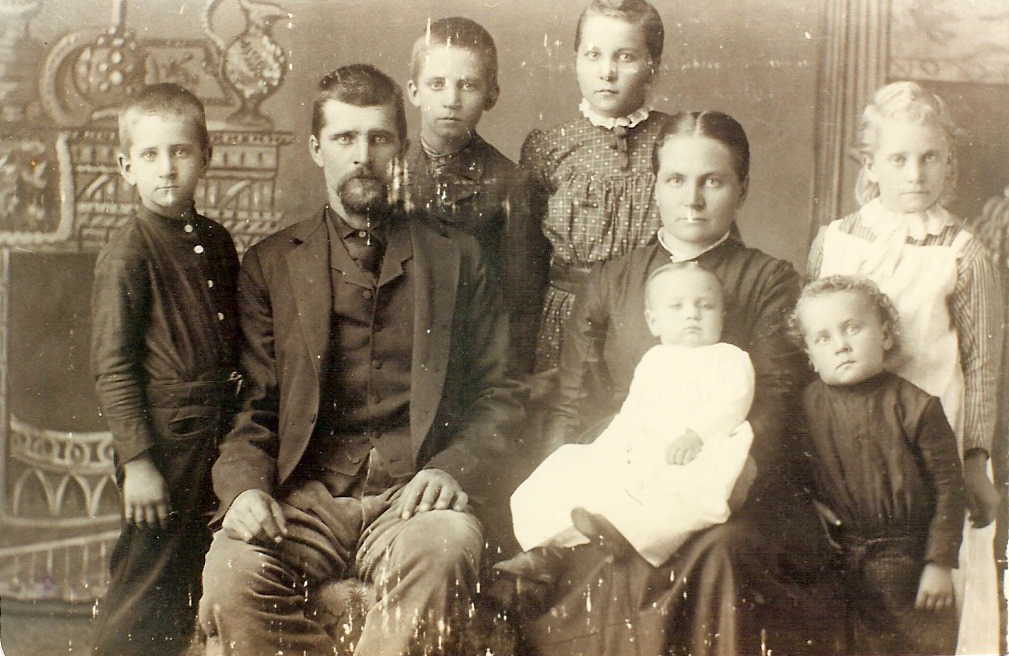 The Frank Collamer family in about 1893: Left to right, Fred, Father Frank, Jack, Emma, mother Acshah Alice, Frank B., Mary and Arthur on the lap of Achsah. For some reason, Minerva is not pictured.

Emm was a pioneer woman, well versed in how to live with few conveniences. The horse and buggy were the primary means of transportation. Emm became pregnant with her first child in 1897 and lost the child in late months of pregnancy that year due to a tragic accident: she was riding aboard a horse drawn wagon. Suddenly, something caused the horse pulling the wagon to spook and the horse bolted quickly, throwing Emm with her unborn child to the ground. This tragic accident caused her to go into premature labor and the unborn child was still born. Apparently they named this child Laura and the child is buried in the Bingham Hill Cemetery just off Bingham Hill Road near Laporte. There are several other Collamer children interred in this cemetery, though I do not know the names or the circumstances of their deaths. 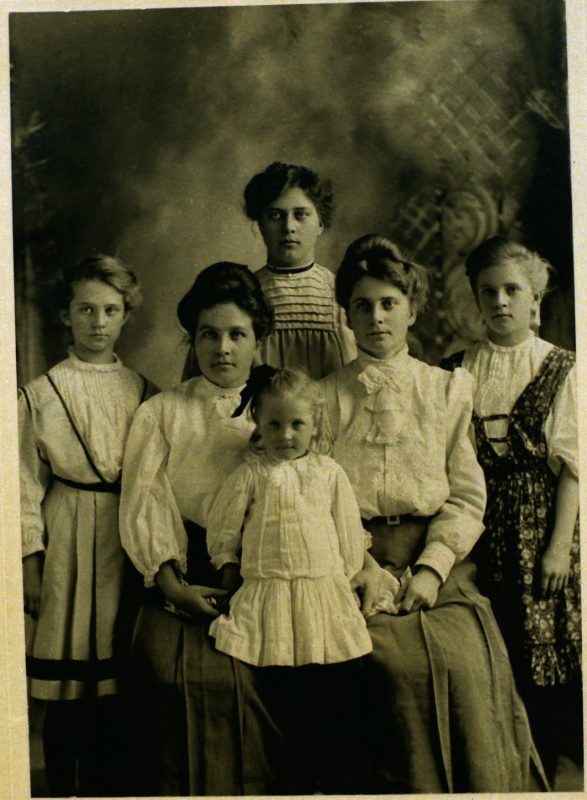 Very near to this time, Emm’s father, Frank A. Collamer, sold his homestead to the City of Greeley along with his pioneer water right in the Poudre River. The City of Greeley built a water treatment and filter plant which still exists and is used today. I always thought this date was sometime in 1898. Frank Collamer decided to move into the city of Fort Collins and bought property in block 53, several lots at a time. This property was at the northwest edge of the city at that time; now it is known as the 300 block of North Meldrum Street. I always thought the purchase dates were 1898 and 1899. I still own four of the adjacent lots in this block, including the building where the Emma Malaby Grocery still stands. At any rate, Frank Collamer had the idea of opening a grocery store in this block. From my recollection, I would guess the year to be 1903 and Frank Collamer opened his store in the front room of his house at 317 N. Meldrum. He sold groceries as well as hay, grain and coal in his business. There were several outbuildings on the property where the coal, hay and grain were stored. The Collamer children would work in these businesses, including Emm and the other daughters. They worked for a number of years in those businesses. 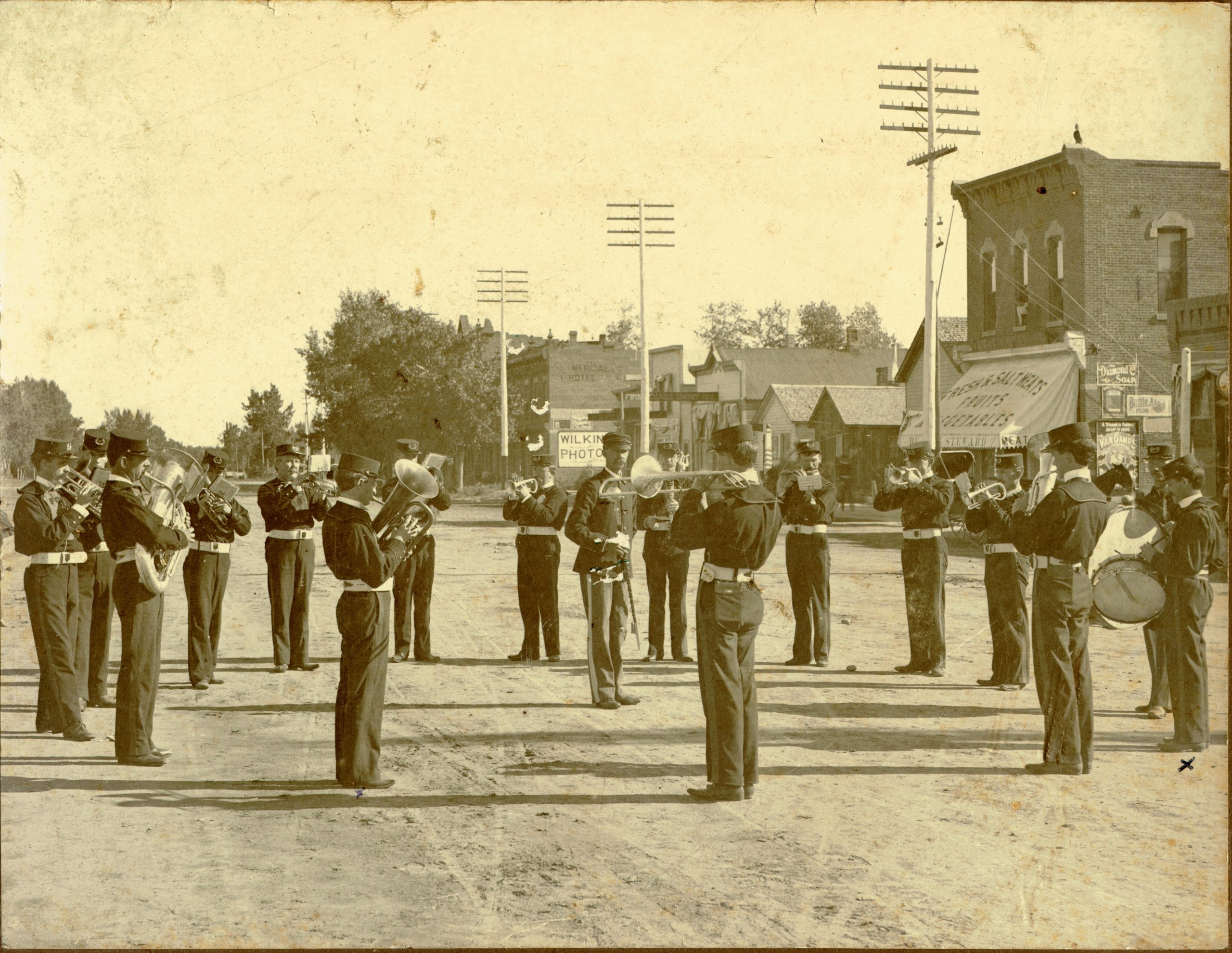 The Collamer/Malaby store can be seen in this parade photo taken on N. College Avenue. (It’s the building just to the right of the middle light pole with a sign stretched between the pole and the building.) This was before the building was moved to Meldrum. (Photo from the Fort Collins Archive, H16724.)

In about 1906, the building at 146 North College was slated to be replaced. A bank building was to be built there and the frame building which stood there was not secure enough to be used as a bank. Ben Whedbee, one of the pioneers of Ft. Collins, owned this property at that time. Frank Collamer’s family delivered firewood to Ben Whedbee and they were well acquainted with the family. Frank Collamer made a deal to purchase this building from Whedbee. I am sure that the price was very reasonable, or maybe even for the cost of moving the building. Frank moved the building to lot 3 of block 53 where it stands today, now known as 313 N. Meldrum Street. In 1984, the city documented the history of this building, along with the history of the Collamer family and businesses. Anyway, Frank moved his business to this location. He also gave the house at 317 N. Meldrum to Emma at that time and moved to 303 N. Meldrum where the family lived for at least five years. Emma continued to work in the store and along the way, she and Ross had two other children, Alma and Ralph.

In about 1919, Frank Collamer had the opportunity to buy another building to be moved, this one from the 200 block of North Mason Street. I believe that the Colorado and Southern Railroad was expanding their facilities and planned to demolish several buildings in that block. Frank Collamer purchased that building also at a very reasonable price and moved it to 801 Cherry Street, a few blocks west of the Meldrum Street property. At that time, Emm and Frank made some sort of arrangement for Emm to take over the Meldrum Street store. Emm was a shrewd business woman and made a living from the Meldrum Street store for many years. 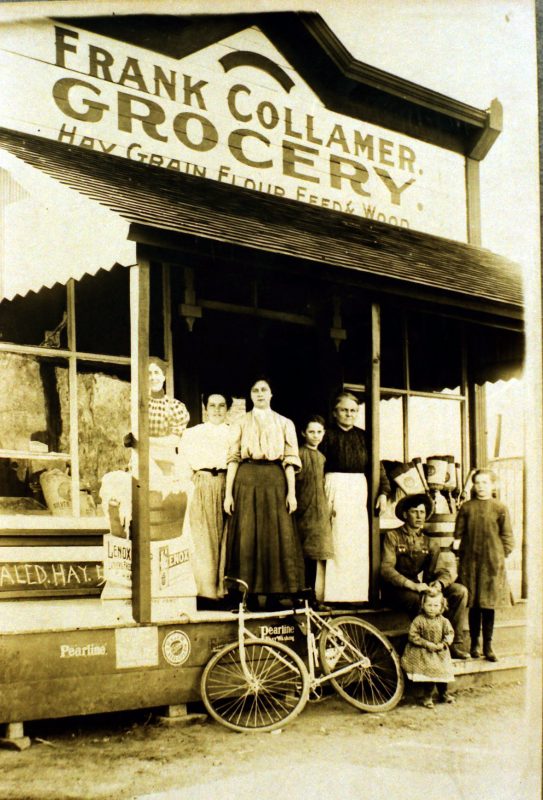 The Collamer family is seen on front porch of store, about 1907.

Various businesses were housed in the Malaby store after the shed portion to the north and west was added to the building in about 1915. My grandma Ruth also operated a business out of this building for a few years, in partnership with her brother Fred Collamer. Fred Collamer took over the wood, coal and hay business and also started a salvage yard there behind the old store building. Fred operated this business until his death in 1971.

Emm operated the Malaby Grocery business until 1943. Her son Ralph was away in the military for World War 2, as were my dad and other members of the Collamer family. Emm retired in 1943 but continued to live at 317 N. Meldrum. By the 1920’s, several of the Collamer family lived in this block, including my grandma Ruth Burrill Dermody. The family continued to help each other in their businesses. Emm would help Ruth with her house rentals when Ruth was away traveling. The Collamer family took care of each other and many in the extended family lived in the three blocks of Meldrum Street north of Mountain Avenue. Emm lived her final days at South Eventide Health Care Center, now named Spring Creek Health Care Center. My family would visit her on occasion with Grandma Ruth. Emm passed away at the age of 87 on September 19, 1967 and is interred in the Malaby plot in Grandview Cemetery at the west end of Mountain Avenue. 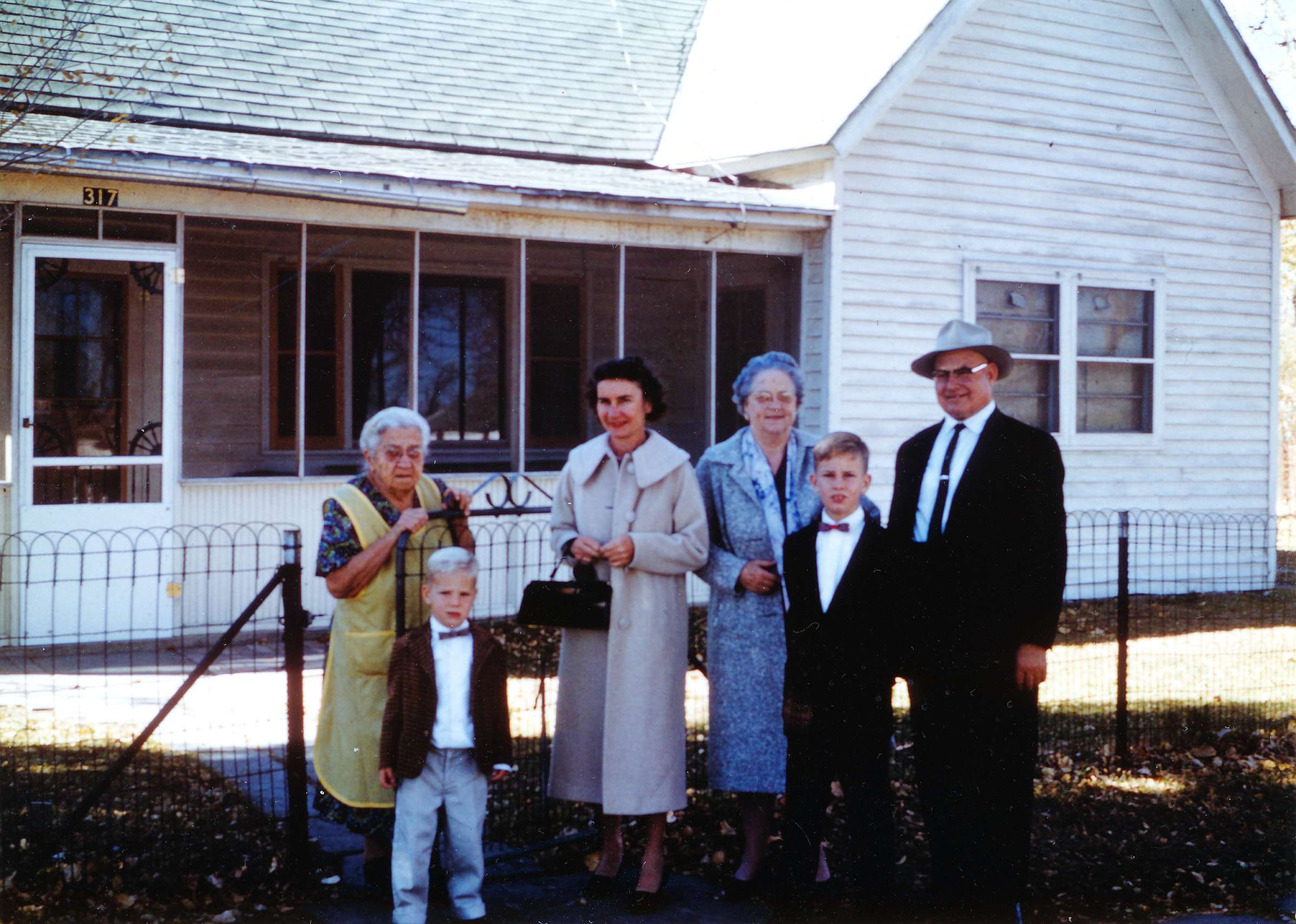 In November of 1989, after several years of work, my wife Carol and I opened the “Emma Malaby Antique Shop” in the building and ran the business for several years until a change of job required me to close the business. Aunt Emm’s name continues to be part of the Meldrum Street scene. 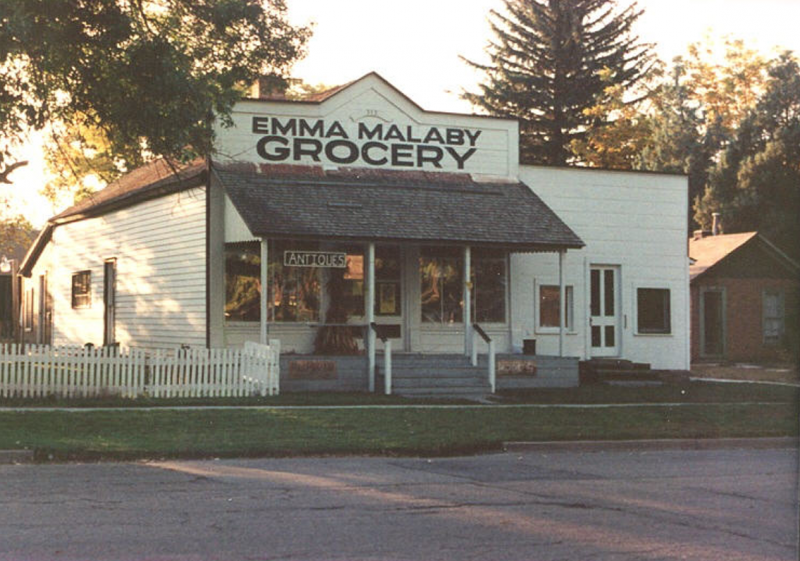