The Vocabulary of Architecture

I’ve written a fair bit about architecture on this blog. It’s not something that I’m trained in, but I’ve been studying it over the past few years and the deeper I dig, the more I find that each house holds a story, not just about what’s happened within its walls, but even in how it has been built and altered. The materials used, the craftsmanship (or lack thereof), the complexity or simplicity, they all speak volumes about the owners past and present, the builder, the time in which the house was built and the decades that it has traversed since that time. Each house is a story unto itself. And every neighborhood blends these stories into yet another, broader story.

But the story that houses tell comes with a vocabulary that I wasn’t, at first, familiar with. As I’d learn about this house or that in Old Town, I’d come across terms that left me scratching my head. I felt like the architecture was important, and I wanted to understand it and what it meant for what Fort Collins was when it started, how it grew, and what it’s becoming today. And yet I was stuck on silly little words that didn’t totally obscure the stories from me, but did make them a little hazier than I’d like.

So today I’m going to pull together some of what I’ve learned and share it with you. I’m not going to focus on the stories. Instead I’m going to walk through the vocabulary, so that when I find a story of a house that I want to share, you’ll have the tools that you’ll need to understand not just the broad picture, but some of the finely detailed strokes as well.

We all learn the basic parts of a house when we’re kids. We know what the roof is, that there are windows and a door, and if we’re drawing a picture of a house, we’ll throw a chimney on with smoke curley-queing up. But not all roofs or windows or doors, or even chimneys, are the same. They come in a variety of shapes and sizes, and each of these says something about the house. So let’s start at the top. 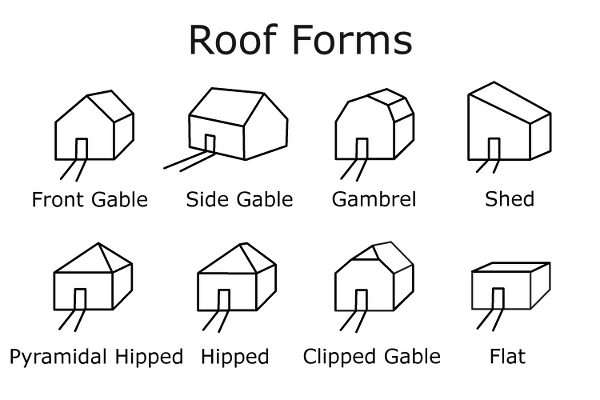 There are a few more roof forms out there than these, but this list shows what you’re most likely to find among Fort Collins’ historic homes. But among this variety, there’s even more variety. How steep is the gable? or how shallow? At different periods of time architects either wanted a house that really stood out (steeply angled roof) or one that hugged the earth, letting it blend in better with the surroundings (shallow or nearly flat roof).

I’ve grown up my whole life seeing roofs that were steep or shallow, but I had no clue that they were made that way with a purpose in mind (other than to have snow slide off easily). 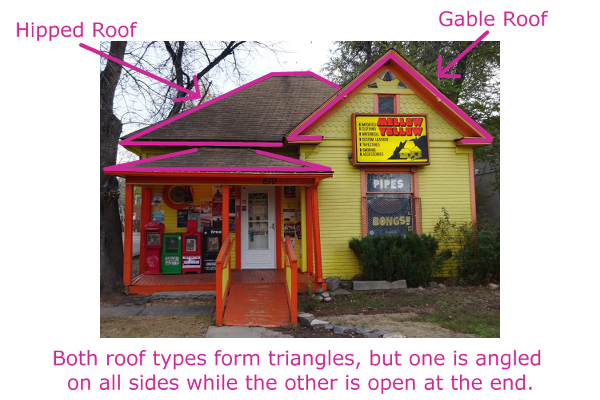 And often, on one house, you can find more than one roof shape. Good old Mellow Yellow has two hipped roofs (one for the main part of the building and another over the porch) and a front gable over a room that sits forward of the rest of the house. Adding articulation (which in architecture essentially means having bits that stick out and bits that sit back) creates a more interesting look to the house.

There are some more roof forms that I haven’t included because they aren’t as common among our historical residential properties. But if you think of the Northern Colorado Feeders Supply building, that has a stepped gable. And there are several buildings around the Library Park area that have mansard roofs (think of the roofline of the original Wendy’s Hamburger fast food restaurants).

And I haven’t even mentioned dormers or eaves, which are another way to add interest to a roofline. And on top of the dormers the architect can mix and match the roofline there, adding yet more variety.

So there are some basic forms, but changing the size, pitch, number and additions (like dormers) can significantly change the overall look of the house. 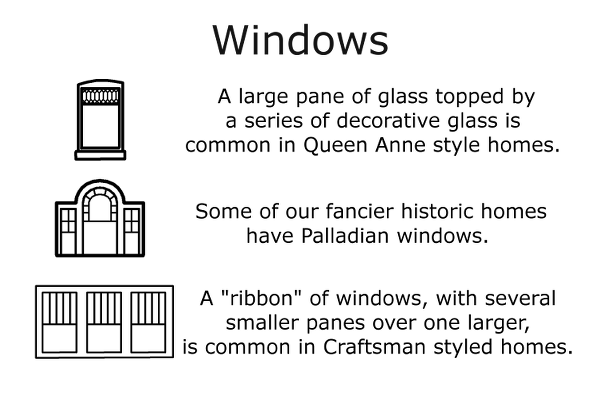 Did you know that every individual pane of glass (no matter the size) is called a light? So in the “ribbon” example above, there are three windows. Each window has 5 lights on top and 1 on the bottom, so you would say that they’re five-over-one. The window “sash” is a section of window that’s all connected. So in the ribbon windows, the top sash is what holds the 5 lights and the bottom sash holds the one. Together these two sashes make up a double hung window. 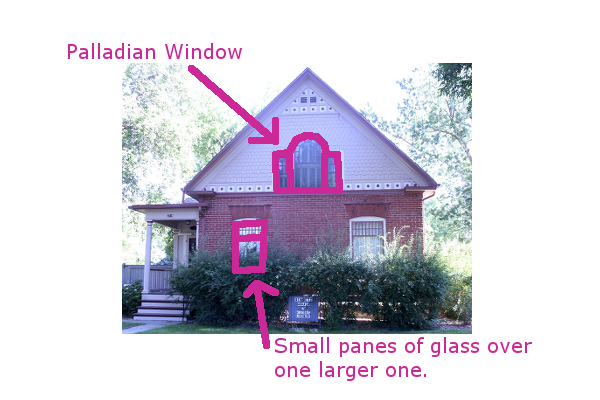 There’s also mullions, muntins, the frame, and transoms. Oh, and fenestration is another way to say you’re talking about windows, doors, or skylights. Oy vey! Windows are tough. For the most part I skip the jargon and focus on the window patterns. You don’t have to have fancy language to describe them, but that still goes a long way toward helping to determine what architectural style the house aligns with best. 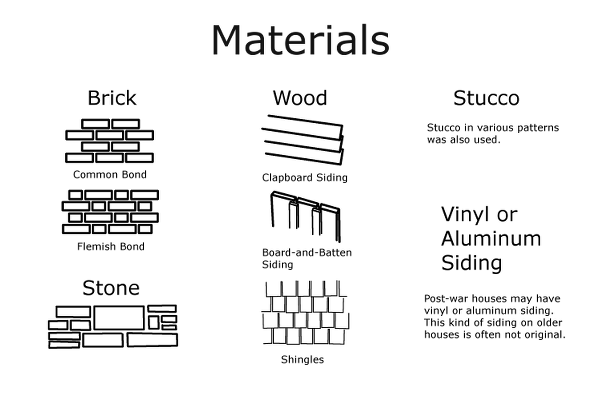 I think that the materials on a house have subliminal messaging powers. When we look at a house we often see the color, or the shape, or decorations on or around the house, but the material of the house itself is something that I think speaks to us without us necessarily taking note of it. Brick and stone imply money, strength, permanence, solidity. We might not think these exact words when we see the building, but they sneak into our brains and lurk in our thoughts and opinions of the building whether we consciously acknowledge them or not.

When we see a wood building, on the other hand, our thoughts often focus on the paint job rather than on the pattern of the wood. (The main exceptions to this, I think, are the Tudor style buildings with exposed beams, or the 1960s/70s buildings with all of the siding sitting at a 45 degree angle.) We take note of the color(s) used and whether the paint’s peeling or not. The wood speaks “common” or “average” or “normal” to us. But we don’t really think about that. That’s the subliminal message of wood. It’s a comfortable material that we can easily take for granted. 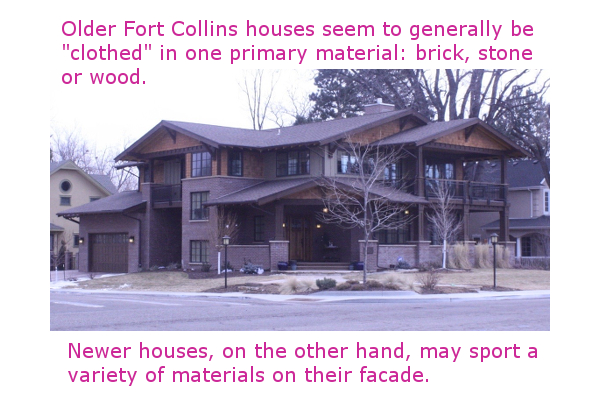 In most of the older houses that I’ve seen, there’s generally one primary material that dominates the structure. During the post war era, however, there started to be more of a mix of materials, even on rather simple houses. (Think of all the wood ranch style houses with brick from the big main window down. … did you catch that? Those ranch houses all seem to have at least one big main window in the living room. Which just goes back to how windows also can tell us something about a house.) This trend seems to still be common today as seen in the house above, which was built just a few years ago across from City Park and includes brick, wood paneling, and wood shingles on its facade. 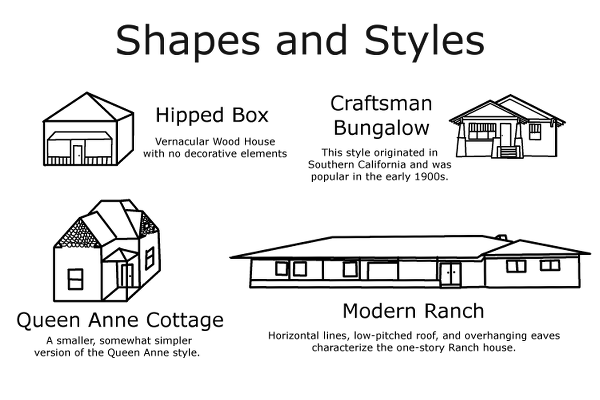 The shapes, sizes, and styles of Fort Collins houses vary immensely, but the predominant number of historic older houses tend to be simple forms of whatever style they represent. Though there are some complex, ornamented houses in our history, many were torn down during the extreme growth that the city saw during the middle of the last century (1950s and 60s).

No matter what time period a house was built and what style it was built in, it’s almost always created out of a mixing and matching of roof forms, materials, window and door styles, eaves, etc. There are some forms that haven’t been mentioned here, as well as house parts that affect the look and feel of a house that I haven’t listed. (I haven’t even mentioned lintels, barge boards, casement windows, louvers, corbels and several other terms!) There are also some buildings that just plain break the mold and contain shapes outside of the usual options, though I don’t know that we have many of those here in Fort Collins. (The Museum of Discovery comes to mind, but that’s not a house.) 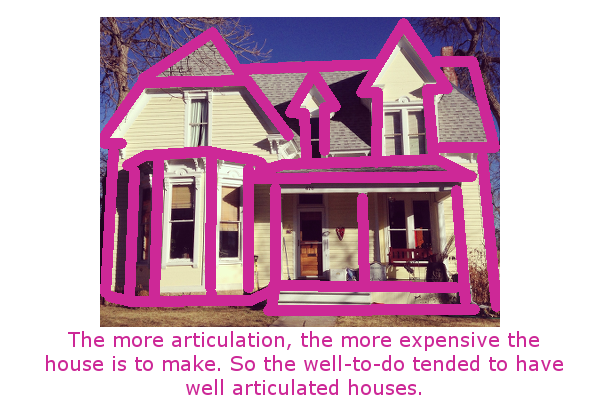 The forms, materials, and ornamentation that’s used on a house can say a lot about the original builder/designer, the values and expectations of the culture at the time, and the wealth or frugality of the original owner. Changes to the buildings likewise speak to changing cultural values (such as increasing amounts of stuff in families with fewer and fewer children), improvements in materials (or the ability to fake natural materials more cheaply), and changing incomes in our city. In other words, there are many stories that we could glean from these houses, if we only know how to read the language of the buildings. Fort Collins’ historic houses are an open book, learn the language of the architect and builder and enjoy the many stories they can tell.

Some books that I would recommend if you’d like to learn more about architecture are: