Then and Now: The Loomis Addition

The Loomis Addition was one of the first subdivisions added to the city of Fort Collins. (In includes the blocks between Laporte, Whitcomb, Mulberry, and Washington on the west side of Old Town.) I’ll be writing more about the history of the Loomis Addition next week (complete with a picture of Oscar, the rooster, who managed to make it into the newspaper in the early 1900s), but today I thought it would be interesting to get a sense of the Addition as it used to be, and as it is today.

I’ve only included a smattering of photos here. In a couple of weeks, I’ll post a second round of photos. All of the older images were taken from the Museum of Discovery Archive website and are of pictures that were originally taken by the County Assessor’s office. The photos are black & white and low resolution. I paired them with photos of the same lots that I took a year ago when I first began to research and document the Loomis Addition.

I tried to choose photos that gave a general sense of how much the neighborhood has changed and how much it has stayed the same. 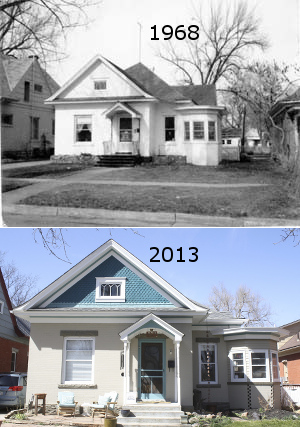 I start with two houses that are side by side. 824 W. Olive is shown above and 820 is shown below. Both houses appear to remain relatively unchanged from the street view. I suspect the octogonal bit that juts out of the house above is an addition, however, as the older photo shows, it’s a fairly old addition to the house. 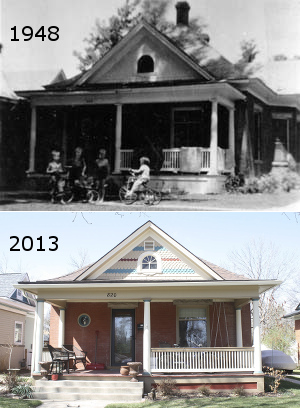 I love that kids were playing out in front of the house in 1948 when the person came by to snap a photo for the county assessor’s files. 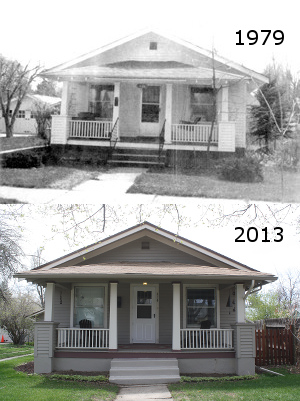 This house on Oak Street is also relatively unchanged. The stairs and walkway look a little cattywompus in the more recent photo, but otherwise only the screen door appears different. 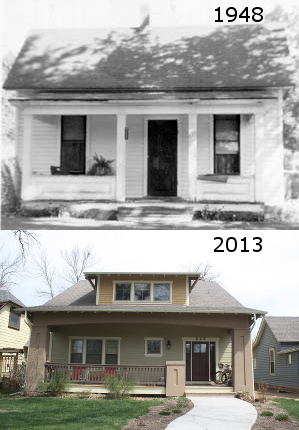 This house, right across the street, looks entirely different. That’s because it is. The house at top was torn down around 2007 after the owner had passed away. Relatives razed the house and dug out a large area for a basement, but failed to proceed from that point. The lot stood empty for awhile and the neighbors referred to it jokingly as the neighborhood pool. Eventually a builder came along and built a new house on the lot. 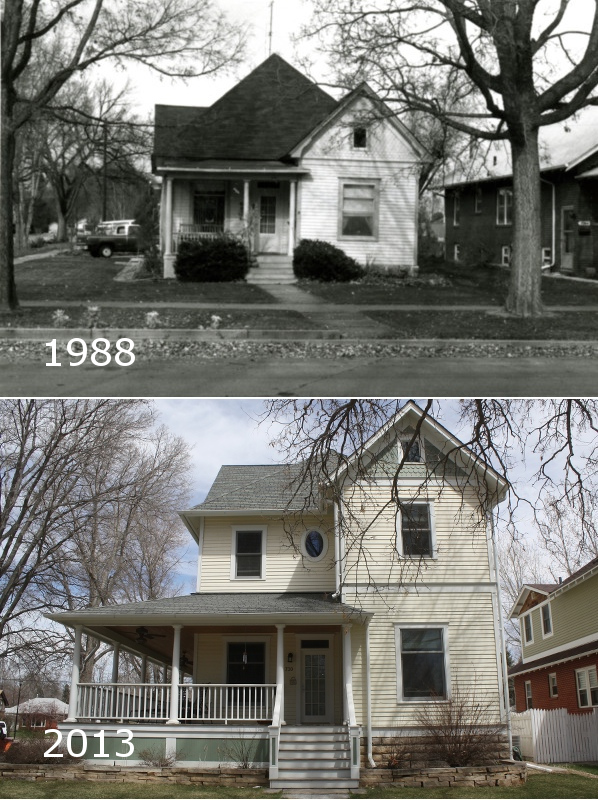 Most of the older photos are posted online at a very low resolution. This one, however, was larger for some reason. I tried to find others at this size… to no avail.

In 2001, the owners of this house decided to pop the top. They actually added two additional stories (despite the fact that houses are limited to 2 stories total in this neighborhood). And they built out the basement so that it extends to the furthest edges of the porch. According to the tax assessor, the house has 2960 square feet of above ground space, although I don’t know if that includes the illegal third floor or not. The basement is listed as being 1414 square feet, which is larger than the house at 619 W. Oak (shown above) by 550 square feet. (Did you catch that? The basement of this house is larger than many entire houses in this neighborhood.) 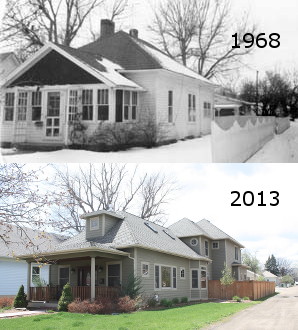 The house at 129 N. Whitcomb also had a large addition added, as well as a multi-car detached garage in the back. This house is only 93 feet smaller in total than the 730 W. Mountain house. I suspect this house was flipped as it was purchased in 2008 for $186,200 and resold just over a year later at $770,750. Neither of the original owners post-addition for either this house or 730 W. Mountain still live in these houses. In fact, the original owner post-addition of this house sold it at a loss ($715,000) last year (despite buying during the height of the recession and selling several years later).

All of the older photos are from county assessor’s files accessed through the online city Archive.