The Colorado Gold Rush began in July of 1858. News spread like wildfire across the country and many were lured westward with dreams of striking it rich. William Osborn, and twenty one men with him, heard the siren song of riches and, in 1859, they left their homes in Ohio for Gold Dirt, Colorado (a mining camp located on the line between Boulder and Gilpin County). Osborn was the scholarly one in the group, having been a teacher for a time back home. His role in the camp was to draw up documents regarding the miners claims and to track the discoveries made in the camp. When differences of opinion arose, it was determined that the camp needed a court, and William Osborn was made judge.

On a trip along the front range the following year, Osborn came upon the Big Thompson Valley and fell in love. He purchased 160 acres just south of the river and called upon his family, still back in Ohio, to come and join him. Margaret arrived in 1861 with their three children — Millard, Milo, and Ella. They lived for awhile in Gold Dirt so that Osborn could wrap his duties up there.  Then together they moved to the plot of land along the Big Thompson river. The whole family helped to gather logs in the foothills which they used to build a cabin right along the river’s banks.

The Arapaho often stopped near their property, given its proximity to the river. But the Osborns and the Arapaho got along relatively well. The main concern, it seems, was that the Arapaho were always hungry and would ask for food. 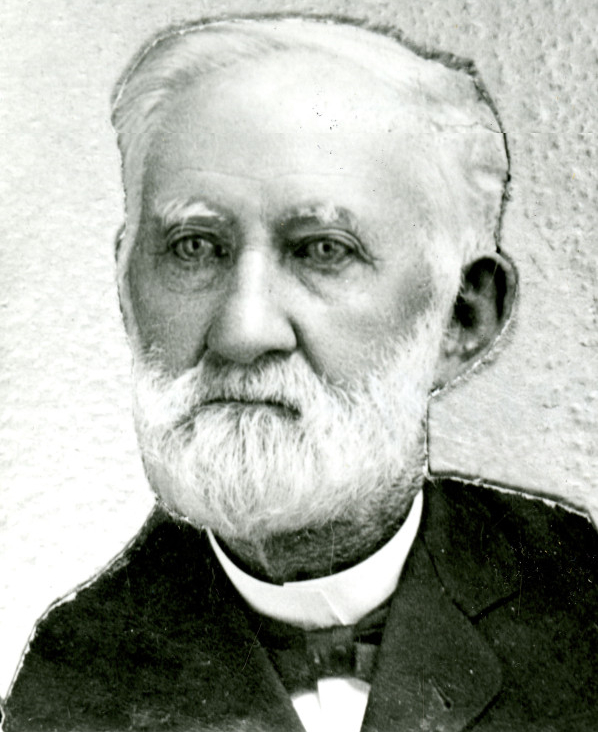 As a judge, William Osborn performed the first wedding in the Big Thompson Valley as well as the first funeral. As a farmer, he brought in the first wheat crop in the county. He was appointed to the board of county commissioners in 1862, along with James Arthur and Joseph Mason. He was also appointed probate judge that same year. The Osborn’s ended up moving to Fort Collins, the seat of Larimer County, so that William could work these county positions. But he continued to have the welfare of the Big Thompson Valley in mind. In 1866, William Osborn and J. E. Washburn brought a petition to the county laying out public highways in the Big Thompson Valley. These were the first highways to be planned within the county.

While the Judge continued to live in Fort Collins where he was heavily engaged in the affairs of the county, his son Milo farmed the land along the Big Thompson river. He married a gal by the name of Louise Frazier, a musician, and began to raise his family in the log cabin that he had helped his father build. There they had two sons, Clarence and Walter. Milo began work on a brick house, and in 1882 they moved into their new home. 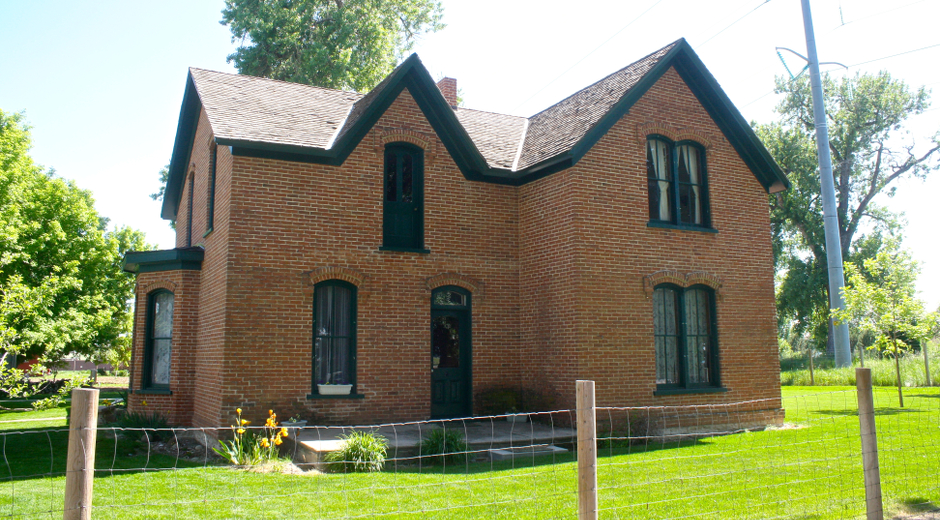 The house still stands today and is part of the Timberlane Farm Museum. Milo and Louise had two more sons, Milo Kenneth and Llewellyn. Milo purchased additional parcels of land, bringing the size of the property up to 245 acres. 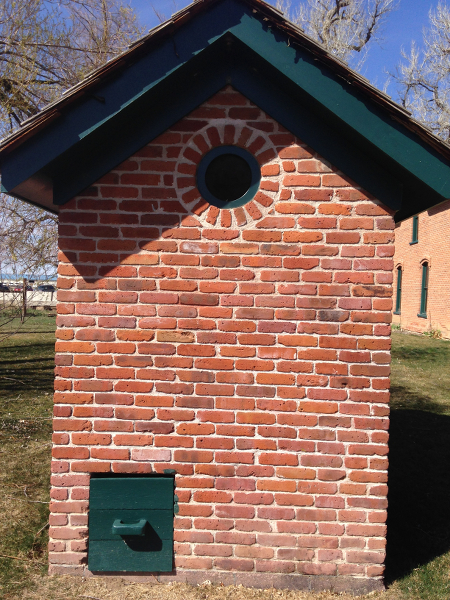 Houses in that day and age were generally built without bathrooms attached. Instead, most had outhouses out back, and Milo’s house was no exception. In the back yard he built this brick outhouse with a wooden slop drawer (seen in the lower left of the photo above) which could be pulled out and emptied. 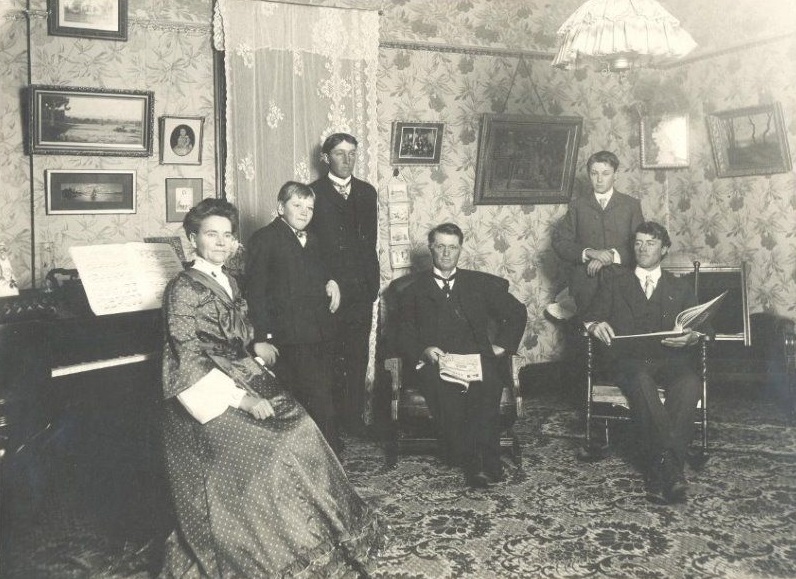 This photo of Milo Yates, his wife Louise, and their four boys, is from the Timberlane Farm Museum website.

Milo was elected Larimer County Assessor in 1899. He, Louise, and their two youngest sons moved up to Fort Collins while the two older boys stayed and continued to run the farm. 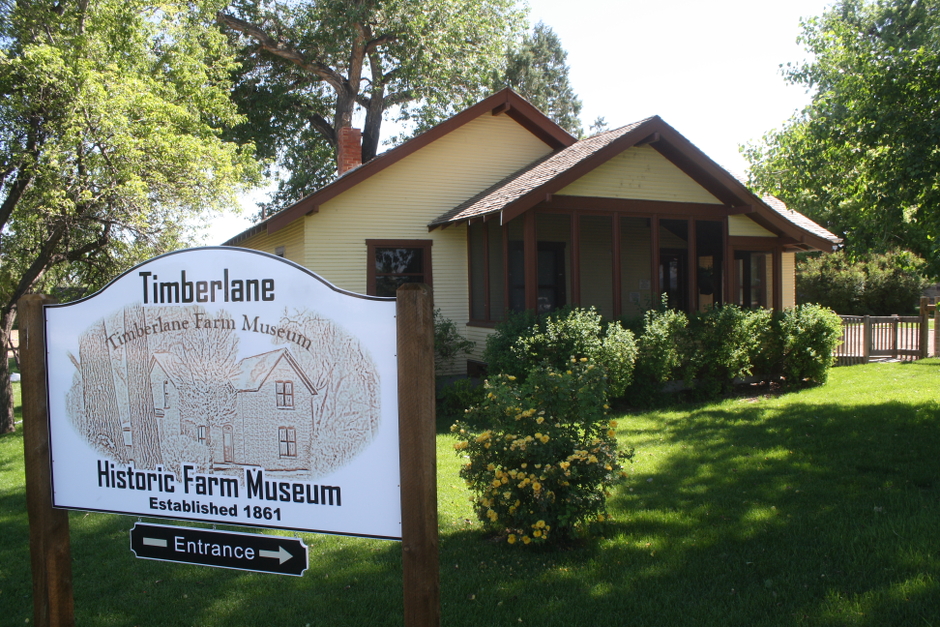 Their son Milo Kenneth eventually took over the farm. He was an able farmer, but he was also an inventor. He designed and built a waterwheel that provided electricity to the brick Victorian house.

Kenneth married Leila Hook and they had two children, Louise and John. He built another house on the property just to the east of the brick house. The new one was built in a Craftsman style. He also made a small dollhouse for Louise that mimicked the layout of the Craftsman house. 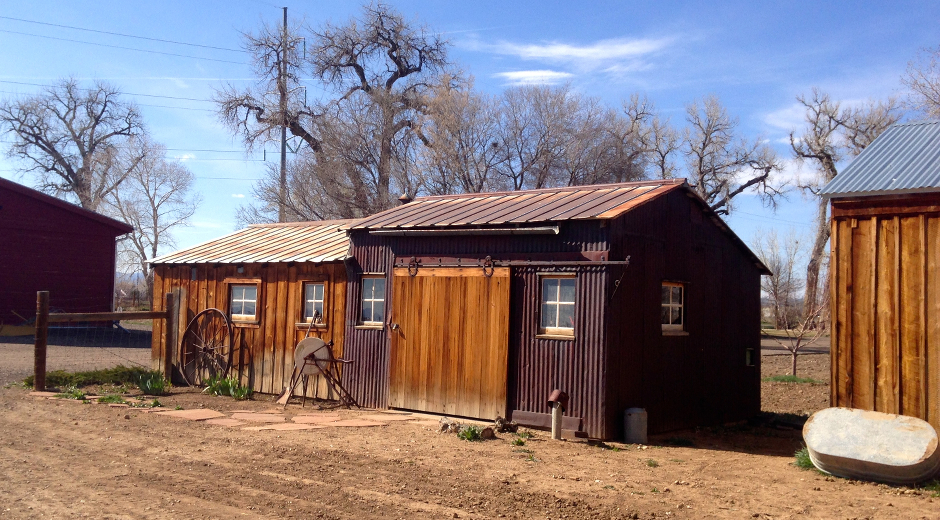 It was Louise who dreamed of one day turning this family plot into a museum for the city of Loveland. Recognizing the importance of her great grandfather’s contribution not only to the city, but to the county as well, she felt that it was important to preserve the farm for future generations. She helped to restore several of the buildings on the property, and furnished them with heirloom pieces including many of her grandmother’s musical instruments, farm equipment from several generations, and her father’s many inventions.

I’ve given a quick overview of the history of the family, but I’ve hardly touched upon all that can be found at the Timberlane Farm Museum. That’s because there’s so very much to see that I’d like to encourage you to go and experience the farm for yourself. The farm is open Tuesday – Sunday  from 9:00 am – 4:00 pm. You can tour both houses as well as the tool sheds and animal pens, which means that you should find something for everyone during your visit.

There’s also an event coming up this weekend that’s well worth attending. Not only will you get a tour of the farm, but there will be sharp shooters, spinning and weaving, kids activities and much much more at the Rocky Mountain Ravelry. You even get $2 off the price of admission if you come dressed in Victorian garb. 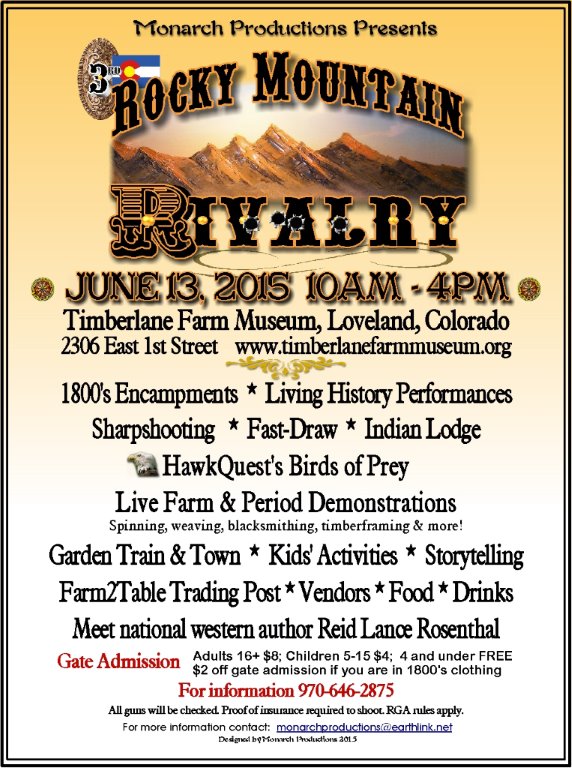 The Osborn family, from William Baskin Osborn all the way down to Louise Gardels Osborn, have been foundational in the building and development of Larimer County and the city of Loveland. Visits to the museum are free (though donations are accepted). Special events (such as the Rivalry) are still quite cheap.

I had the opportunity to tour the Timberlane Farm last summer, which is when I took several photos of the place. I also stopped by yesterday to snap some shots of the houses. But most of the information that I used to write about the history of the Osborn’s came from either the Timberlane Farm Museum website or from Ansel Watrous’s History of Larimer County (mostly page 467).

Gold Dirt is described briefly on a Putting Together Colorado Territory webpage.

The Colorado Gold Rush was also known as the Pikes Peak Gold Rush. You can read more about it on Wikipedia.

Also check out this Heiditown post on the farm: A tour of the Timberlane Farm Museum in Loveland, Colorado.