Then & Now: FCHS, Lincoln, Franklin and CSU – plus some bonus shots from Rockwood & CLP

I have a love hate relationship with trees. I didn’t use to. I used to just plain love them. But I didn’t used to put Then & Now photos together for posts on this site. And now that I do… suddenly I hate trees. They can be such turds sometimes.

I went to get a current photo of the old Fort Collins High School on Remington. My goal was to photograph it from the same spot as a photo that was taken back in 1926.  Check this out. 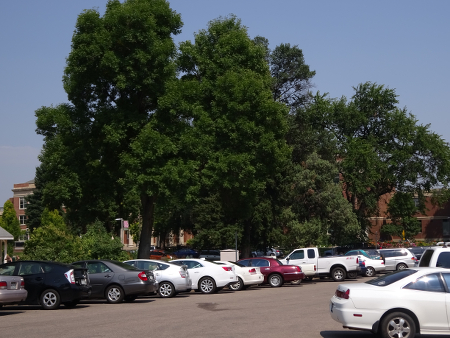 The old Fort Collins High School, now the University Center for the Arts at Colorado State… behind trees.

Aarrgghh! So much for capturing the same angle. I walked left/north, and further left, and finally gave up on that idea. I had to walk up to Remington to get a shot where I saw more building than trees. 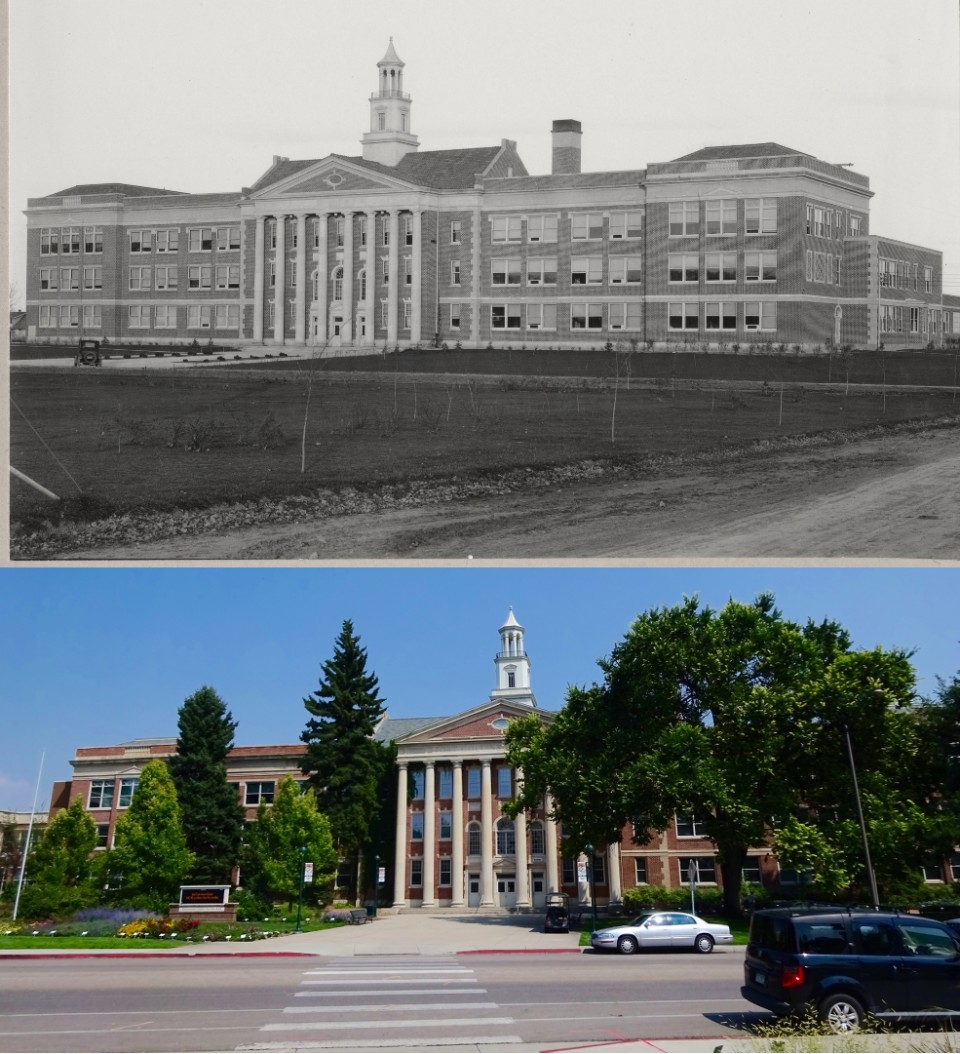 Fort Collins High School, now the University Center for the Arts at CSU. The top photo is from the CSU Archive and was taken in 1926.

Next I headed over to the old junior high, now the Lincoln Center. It’s one thing to try to get a shot of the same building over a period of time. But it’s entirely different trying to get a shot when absolutely nothing in the frame matches between yesteryear and today. 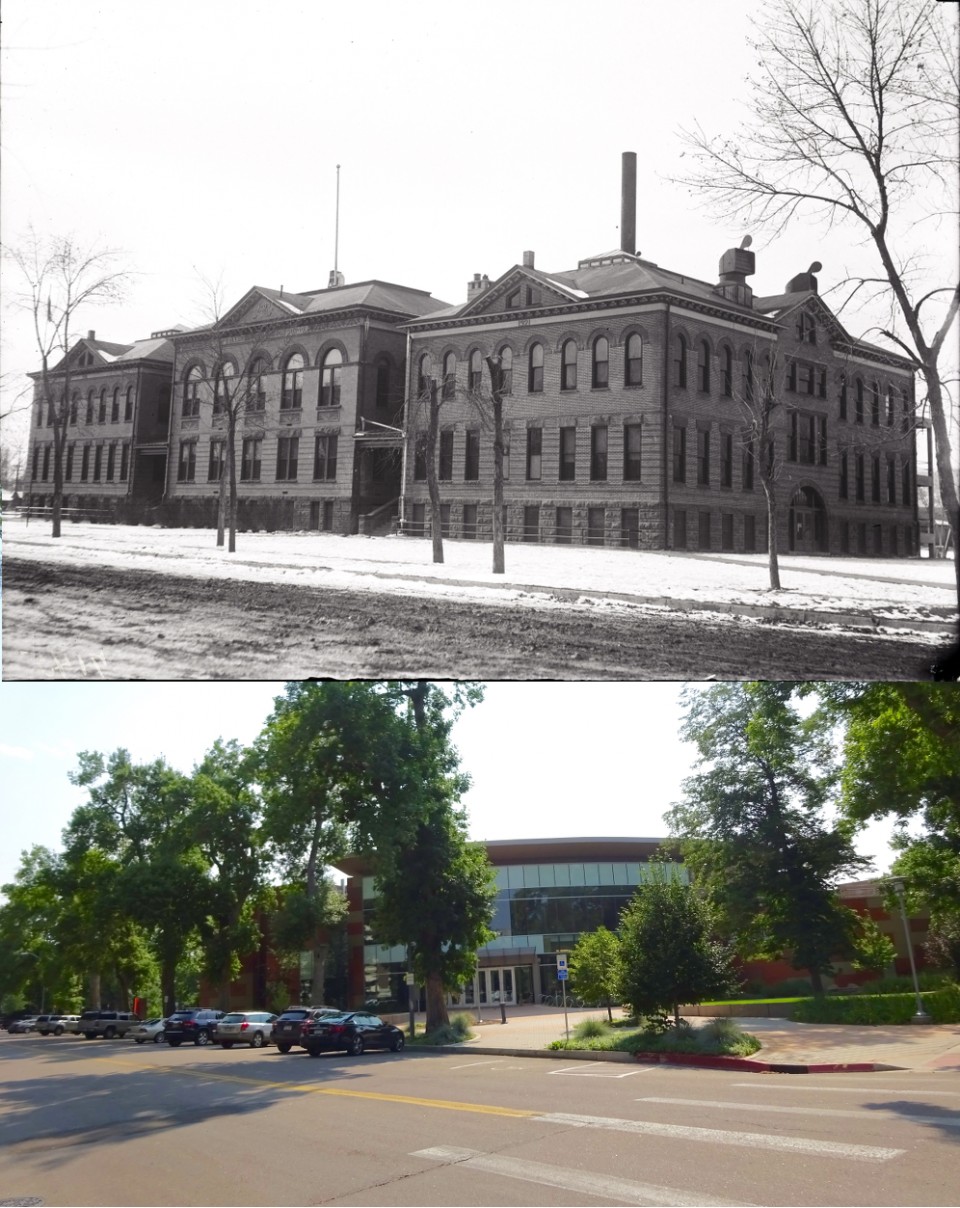 The building in the top photo originally held the Fort Collins High School. When the high schoolers moved to the location on Remington, the junior high was able to take over the building. Fort Collins Junior High was renamed Lincoln Junior High in 1939. The building that stands there today took on a part of the name and is called the Lincoln Center. The undated older photo is from the CSU Archive.

I snapped a shot of where Franklin school used to stand as well. I had a similar difficulty there, not really knowing where I should stand to try to get a photo of the same area from the same angle. Notice the house in the background where the Key Bank, or maybe it’s the Key Bank parking lot, is today. 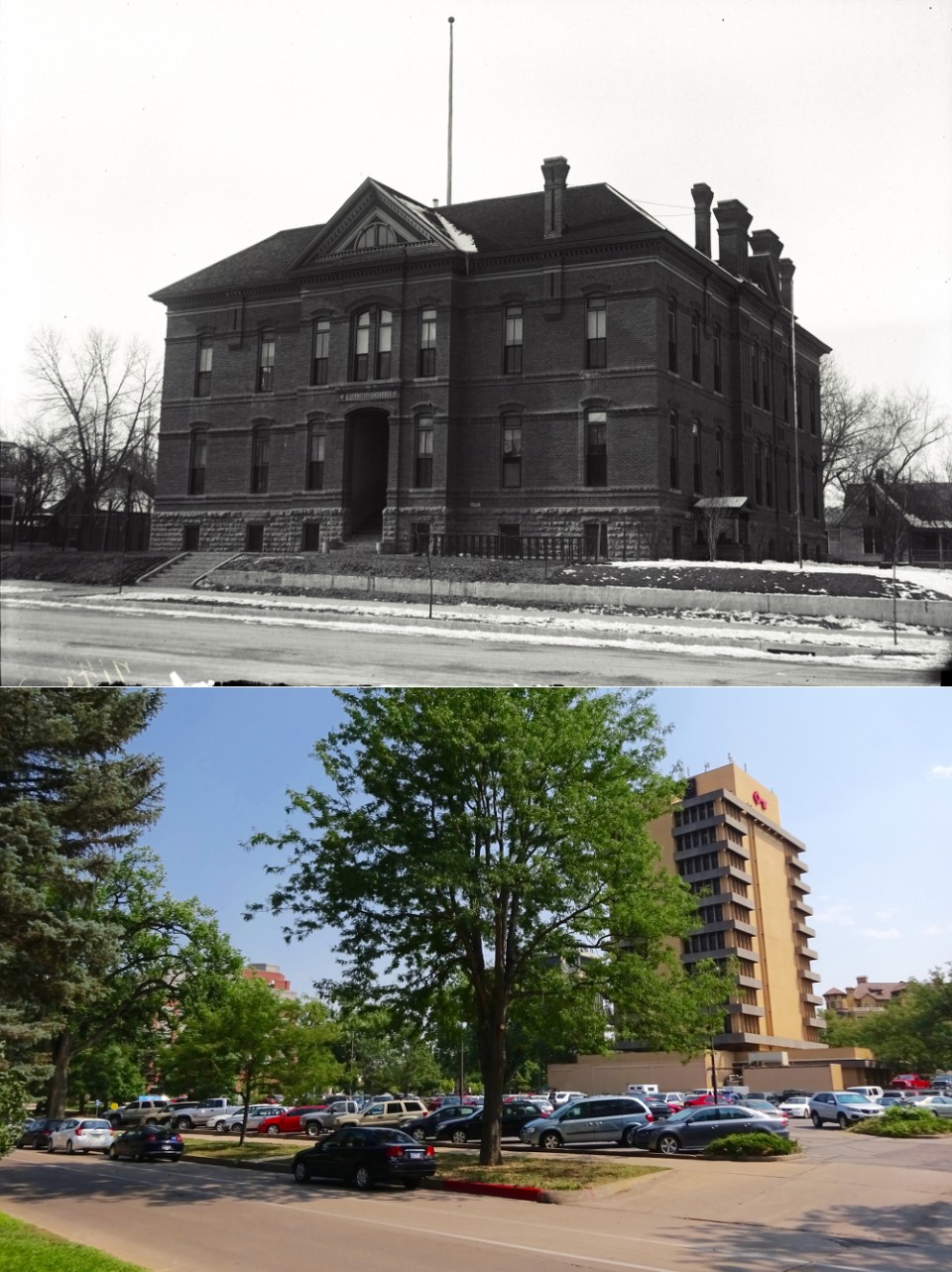 The Franklin School was an elementary school located on W. Mountain Avenue, between Howes and Meldrum. Steele’s Grocery used to stand in this location after the school was torn down. The undated older photo is from the CSU Archive.

I’ve included Spruce Hall in previous posts, but here it is again — another example of a school building in town that hasn’t changed much over time. When originally built, it was used as a dormitory. 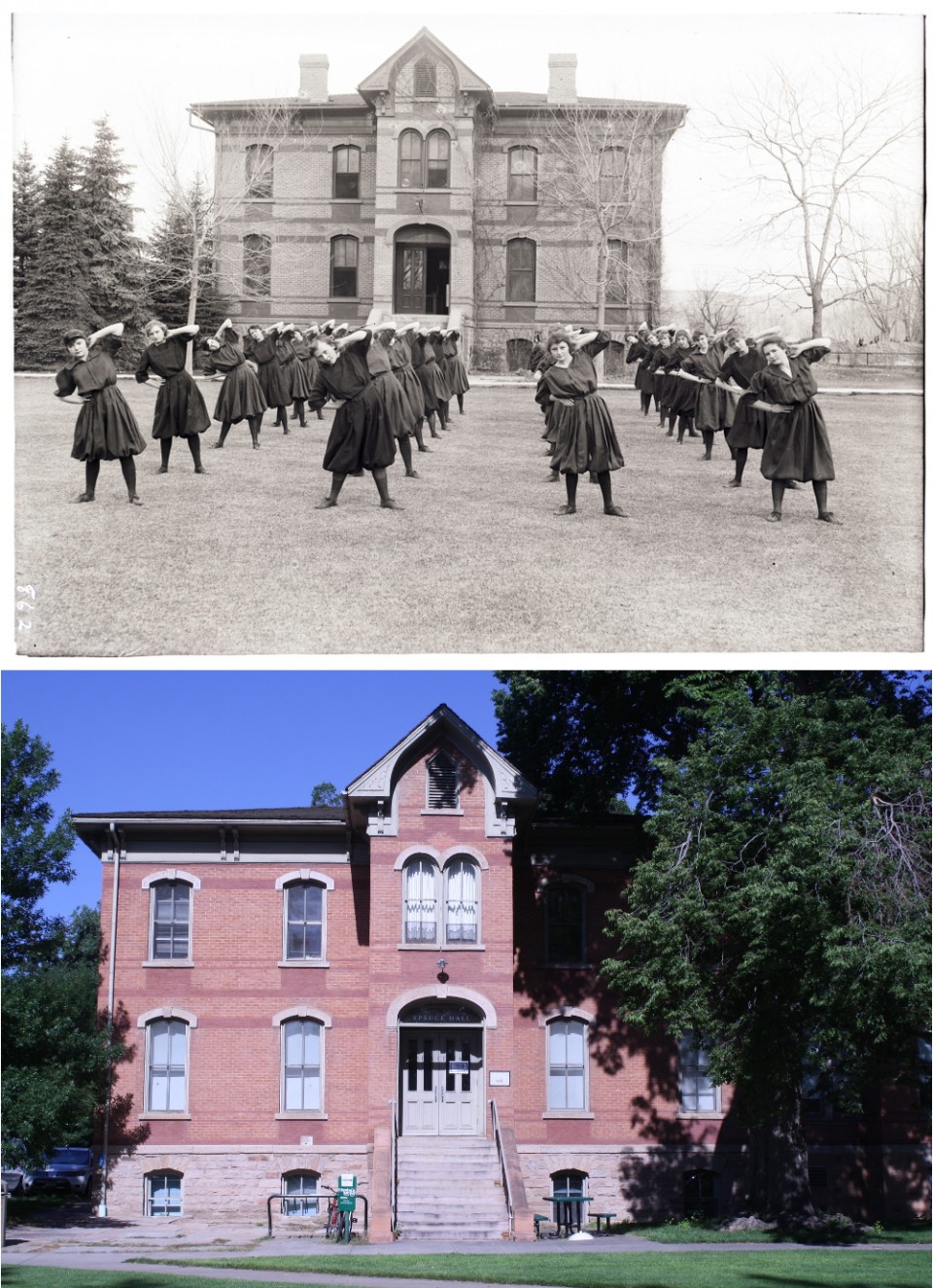 Girls do exercises in front of Spruce Hall. The notation in the CSU Archive points out that this is a mirror image photo that was in the Colorado School of Agriculture Prospectus for 1915-1916, which gives us a sense of the date of the photo.

The CSU Archive also had a few other cool photos that I thought I’d share. 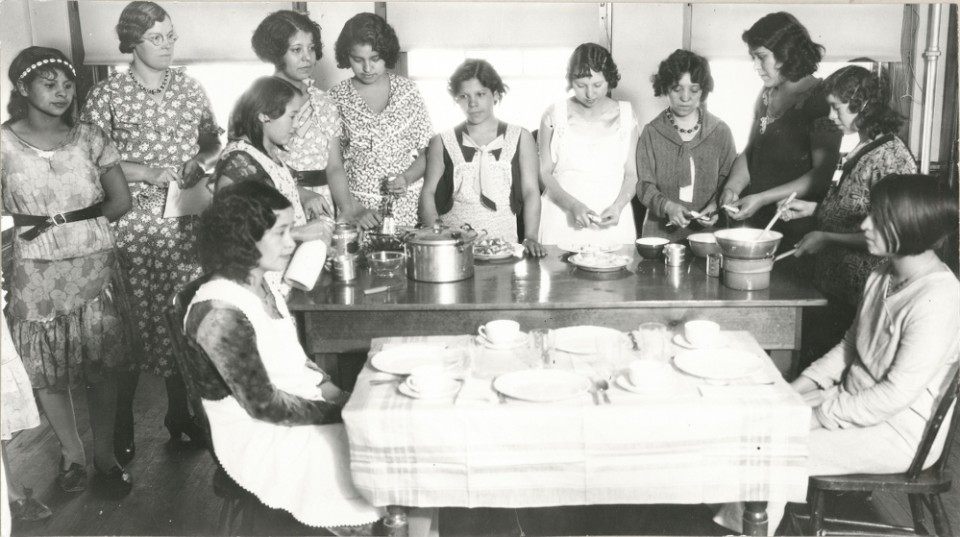 These girls were in a cooking class at Rockwood School (which used to be located on Lemay, between Lincoln and Vine) in 1933. From the CSU Archive. 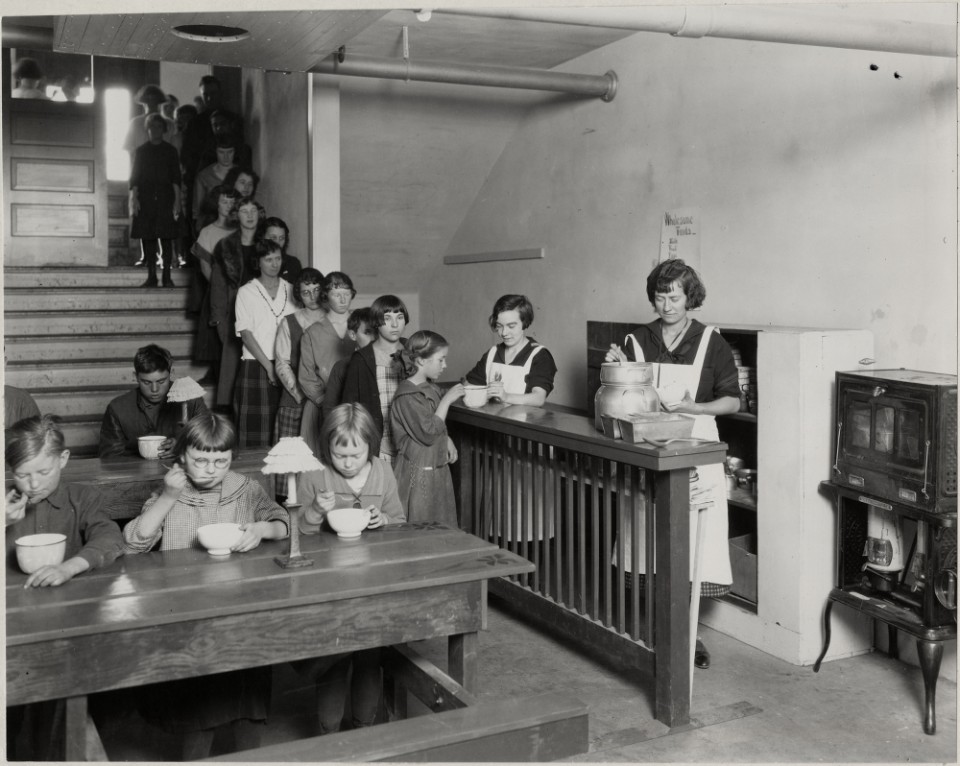 These students at Cache la Poudre school were waiting in line for soup. That’s not much of a cafeteria.

My kids started school this week. As much as I’m sad that our summer is over, I have to admit that I appreciate the procession of the seasons and I look forward to the coming of Fall. I hope you all enjoy the last of our summer days before the cold weather comes to stay.