Then & Now: The intersection of Laporte Ave, Walnut St, and College Ave.

I’ve written a few Then & Now posts about Downtown, but most look at the area from a bird’s eye perspective. Today, thanks to the CSU Historic Photograph Collection online, we’re going to take a streetview look at the intersection of Laporte and N. College. 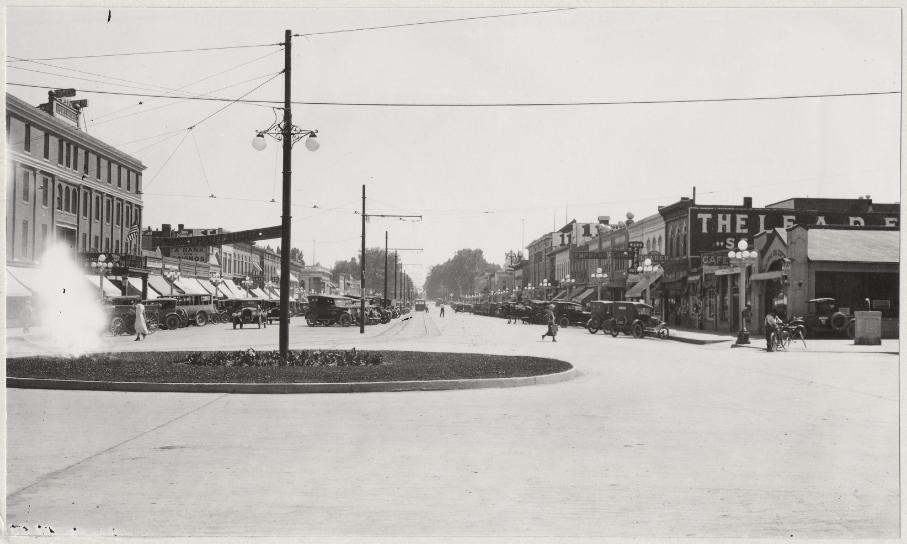 The most immediate difference that I note between the intersection in 1924, when the above photo was taken, and today is the roundabout. (Click on the link to a bird’s eye perspective above to orient yourself if needed.) There’s also some darling street lamps lining the street with multiple globes. And you can see the trolley tracks just to the right of center parking. The buildings on the west side of the street are notably different as well. But that will be easier to see in a closeup of this photo. 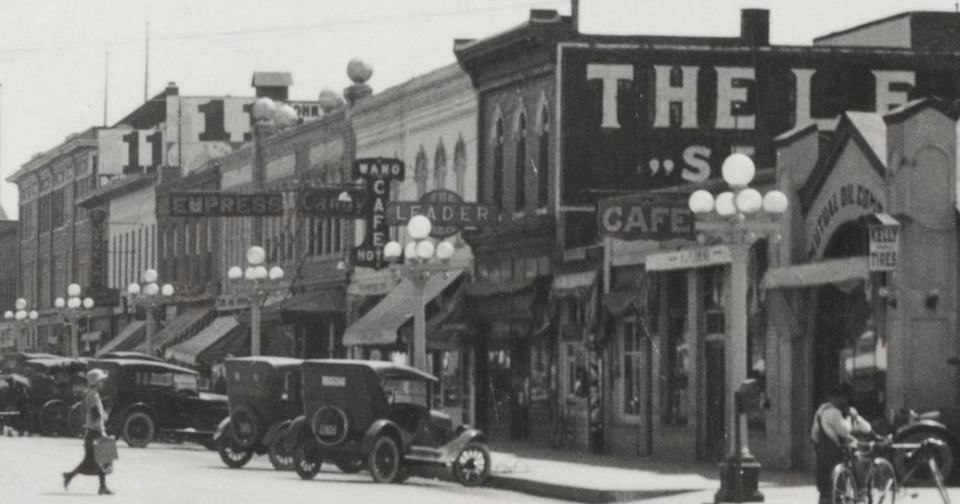 Behind the two gentlemen with the bicycles on the corner, is the Mutual Oil Company Service Station. This is where Pueblo Viejo is today. I believe that the Wano Cafe was located where Old Town Art & Frame is today, although I’d have to do a bit more research to be sure on that. And notice that the facades of the buildings behind that were primarily brick with cornices and other doo dads (like the bulbs on the top of the building behind the Empress Candy signs). Some of these buildings might still be around today, but you wouldn’t know it from the changes that have been made to the exterior of the buildings. 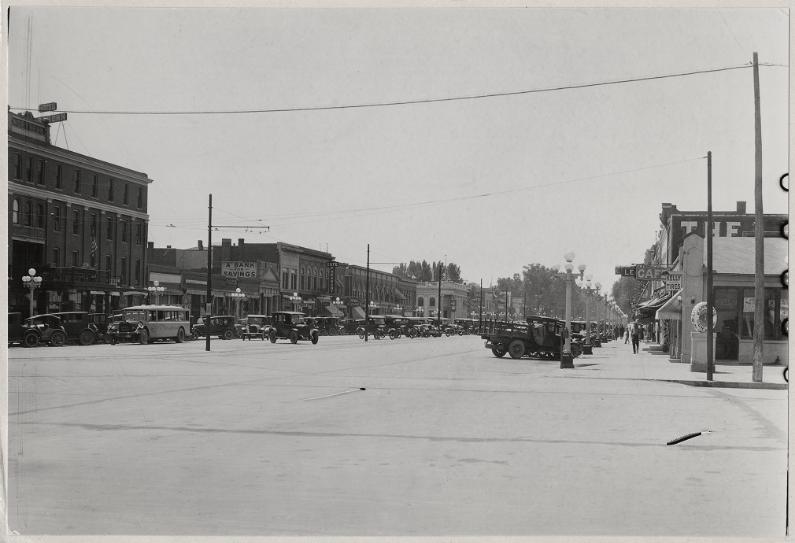 Many of the shops along the east side of N. College look very similar today to how they looked in 1925. This isn’t because the buildings have always looked this way. It’s because the east/left side of the street is within the Old Town Historic District and the right side isn’t. So the folks that own property on the east side have been able to make use of financial benefits from the city, state, and feds that have helped them to restore the facades of their buildings back to their original Victorian era look. (The west side could seek to join the district, but designation is owner instigated, not city instigated. So the owners would have to initiate such an action.)

Don’t miss the bus that’s traveling north right in front of the Northern Hotel. Busses looked just like big cars! We have limos these days that could rival one of those old busses.

Here’s a modern day look at the same area taken from Google Street View, which captured the shot on August 2014.

You’ll note that the Northern Hotel looks different today than it did then. It was remodeled in 1936 with the Art Deco style that it still bears today. To read more about the history of the hotel, I’d recommend checking out the Lost Fort Collins post on the Northern. 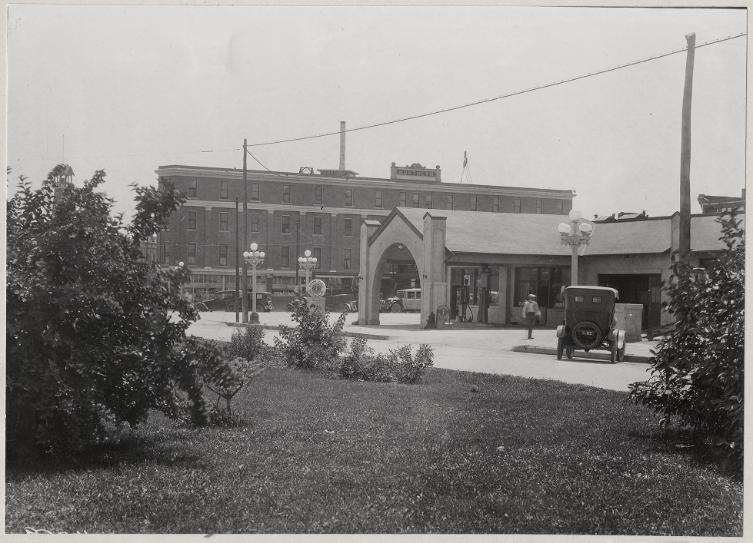 The note on this photo in the CSU Archive explains that, “The Mutual Oil Company Service Station is in the foreground. It sells Conoco gasoline and features Kamm’s Tire Service.” You also get a better view of the Northern Hotel in this shot. 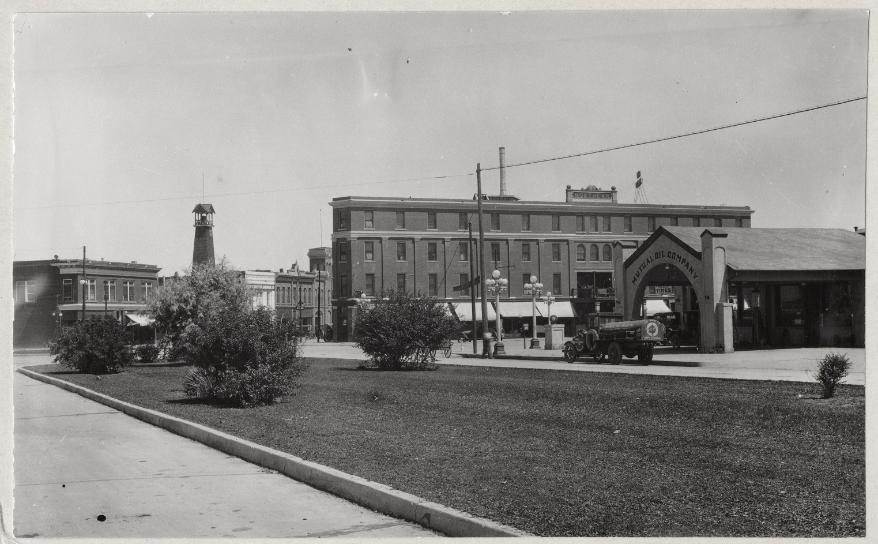 In this photo you can see all the way down Walnut Street to the Old Firehouse (which was also City Hall). The building just to the left of the firehouse is now a parking lot. The building at the far left in the photo is where La Luz and the Welsh Rabbit Bistro are today. 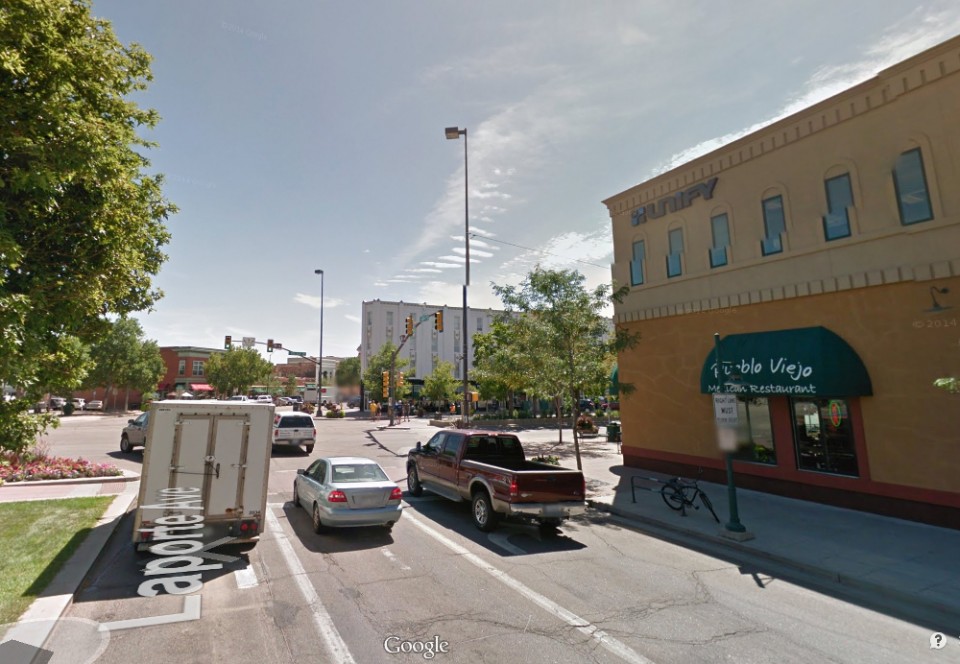 Here’s another modern day look facing towards Walnut Street from Google Street View, which captured the shot on August 2014.

If you walk across this intersection, especially if you’re traveling along the north side, take a look at the pavement and you might see a round crack near the center of the intersection. I assume that to be the location of the roundabout that you can see in the older photos above. Even when we’ve changed streets and facades, sometimes history still finds a way to remind us of what once was there.

The top photo is from negative #4555, from the CSU Digital Archive.