Then & Now: The Bow of the River and Downtown

The “River District” is an up and coming part of town with a lot of new development going on in the area. It’s also the site of the original “fort” of Fort Collins. (The fort was never a walled compound. But there were barracks, a parade ground, and officers quarters.)

The area grew and changed quite a bit over time. Once the military outpost was shut down and the city of Fort Collins got its start, it developed around the intersection of Linden and Jefferson. But as the city grew away from the river, the locus of downtown shifted a block towards the southwest to where Linden crosses Walnut. Eventually, as Franklin Avery built his fancy pants new bank building at the corner of Linden and Mountain (where The Kitchen is today), the older parts of town came to be called “Old Town” and the area around Mountain and College was termed “New Town.”

But I’ve found a wonderful aerial photo from 1929 that shows that’s it’s not just the center of town that has shifted around. The river has made a significant change as well. If you look at the black and white photo below, you’ll note that the river bows out towards the lower left hand corner of the photo. Then it curves back towards Ranchway Feed before heading southeast towards the Coy property.

If you compare that section of the photo to the Google satellite view, you’ll see an echo of that exact same bow in the river. What you’re seeing is the trees that have remained behind after the river shifted. The houses of the Buckingham neighborhood used to be separated from the river by only a dirt road — 1st street. It’s no wonder the small community was devastated in the great flood of 1904. 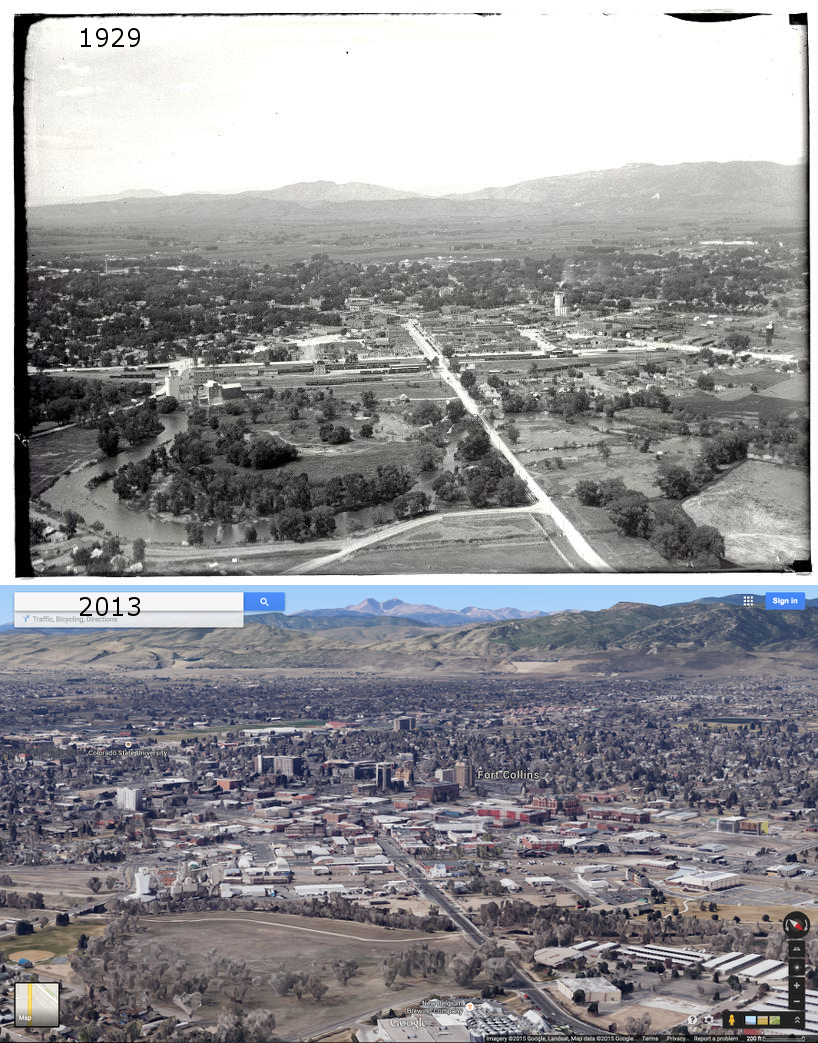 If you ever attended Tour de Fat festivities by New Belgium before they moved over to the Civic Center area, then you’ve stood right where the river used to flow.

Here’s another image of the “echo” of the bow in the river, as seen from above. 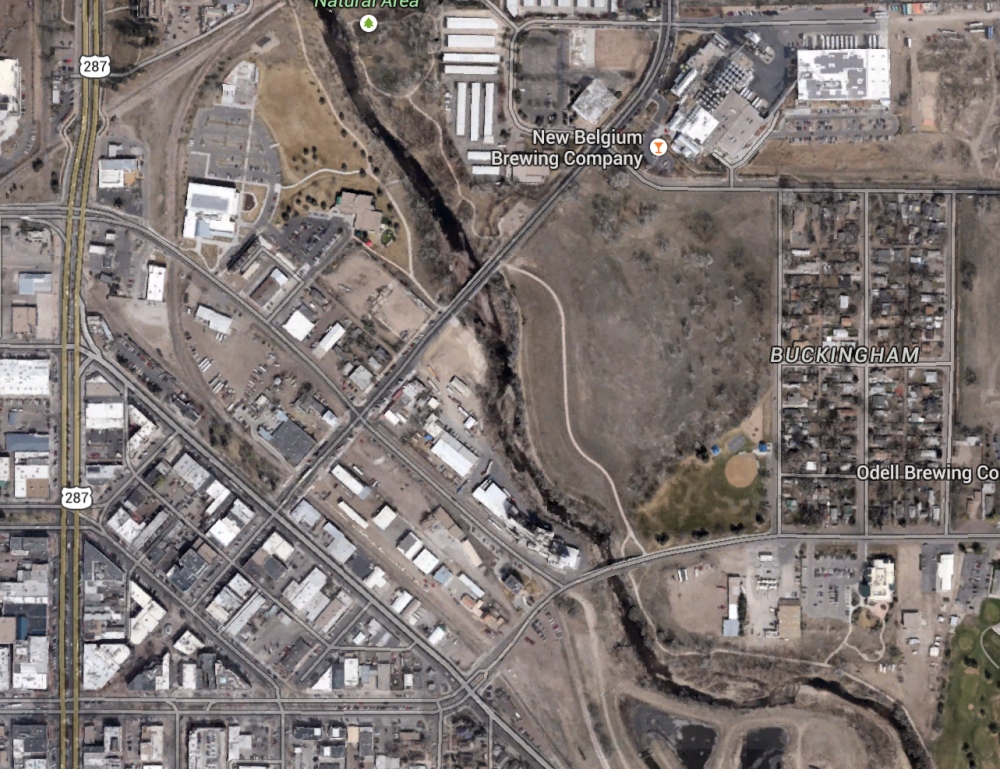 I’ve expanded the older photo to focus on the point where Linden crosses the river. There are two separate bridges in order to cross what was essentially several separate ribbons of the river. 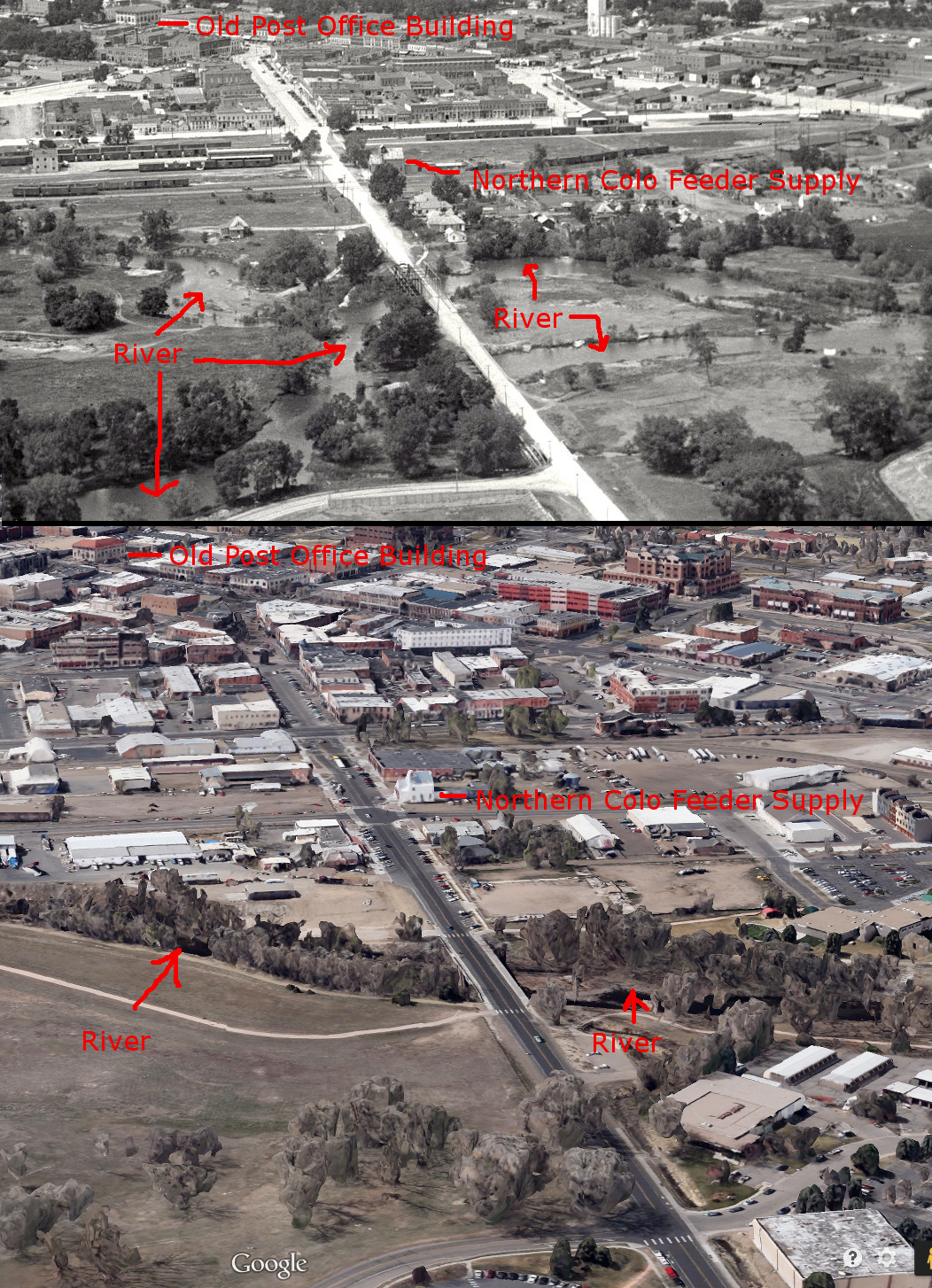 I’m going to leave you with one final image. I zoomed in on the buildings along Jefferson street. Many of the store fronts to the west of Linden (to the right, in the photo) remain intact and are now part of the Old Town Historic District. But most of the buildings to the east of Linden have either been torn down, or so greatly altered that you’d be hard pressed to make out their original age or character. 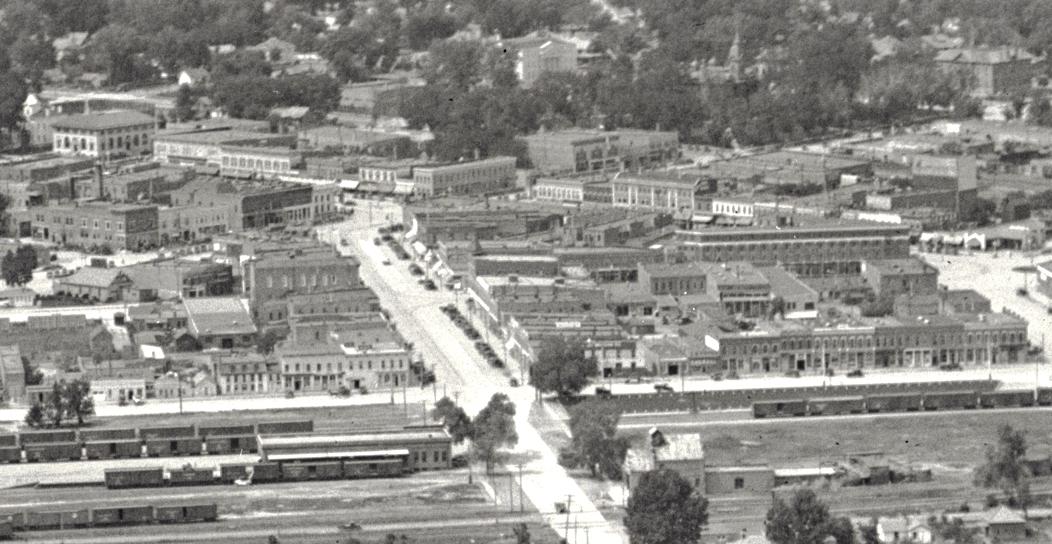 You can also make out the Old Post Office, the old Opera House, the Northern Hotel, and the Masonic Temple as well as several other buildings that still remain today.

You should be able to click on any of the photos above and have them expand a bit so you can see them better. But to really dive into the photo, I’d encourage you to go take a look at the original posting on the CSU Archive online. (See link below.)

The black and white aerial photo is from the Colorado State University Online Archive. If you click through on the link, you’ll be able to zoom in on the photo, which is an incredible amount of fun. I highly encourage it.

The present day satellite views of Fort Collins are from Google Maps.