It’s Fort Collins’ 150th Anniversary and in previous years, anniversaries have often been celebrated on the 4th of July (not because that’s the actual anniversary date, but because we’re already shooting off fireworks so it just seems like a logical time to celebrate). In that spirit, I present to you today the Forgotten Fort Collins “Top 10 Events that Have Shaped Fort Collins” list, in chronological order. 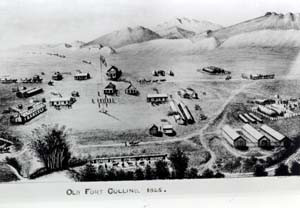 1. Flood in LaPorte in 1864. Camp Collins was originally located along the Cache La Poudre river near present day Laporte. But a flood on June 9th, 1864, led the army to seek a new location for the outpost. If the flood hadn’t happened, it’s unlikely that Fort Collins would have been anything more than a few homesteads along the river. On August 20, 1864, Colonel Collins declared that a point 4 miles south along the river from where the camp used to reside would become the new camp site. Though the city of Fort Collins wasn’t incorporated for another 9 years, it was the movement of the military post that eventually led to the formation of the town of Fort Collins.

2. Arrival of the railroad in 1877. When the Colorado & Southern Railroad built a line through northern Colorado, they decided to put a stop several miles to the east of Namaqua, Colorado. The city of Loveland grew up around that train stop. The city of Namaqua? Well, have YOU ever visited that little town? Exactly. Not getting the railroad was Namaqua’s death knell. It is now part of northwestern Loveland. Without the railroad, not only would Fort Collins not have experienced a little growth spurt in 1877, but it very likely would not have secured much of the business that enabled it to continue growing from a small agricultural town into what it is today. Though the agricultural college might have kept it from going the way of  Namaqua, the city would likely only be a shadow of its present form. 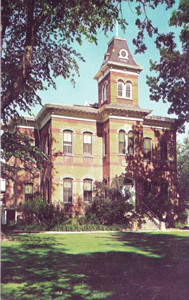 3. Creation of an agricultural college in the 1870s. Governor Edward McCook authorized the creation of  a land grant college in Fort Collins on February 11, 1870. In 1879, the college welcomed its first 5 students. The Colorado Agricultural College was an integral part of the community with residents frequently participating in events along with students. Now called Colorado State University, the college is the largest employer in the city. It continues to draw new students, as well as staff, to our neighborhoods — shaping and effecting our community with intellectualism, diversity, and entrepreneurialism.

4. October snowstorm in Trinidad in 1889. An October snowstorm in Trinidad in 1889 blocked a train full of lambs from reaching their destination in Nebraska. By the time the tracks were cleared and the train could move again, some of the lambs had died and the rest were in sore condition. Knowing they wouldn’t make it to Nebraska, they were brought to Fort Collins where they were fattened up on alfalfa. Thus began the sheep feeding industry in Fort Collins. Sheldon Lake at City Park was originally created by John Sheldon to water his sheep. (The hill in City Park where many residents like to watch the fireworks on the 4th of July was created by dredging the lake.) The arrival of the sugar industry in 1902-3 was also important in Fort Collins, but sheep raising had a better origins story which is why it made the list.

5. Frank Miller’s liquor license expired in 1896. With the expiration of Miller’s license on June 11, 1896, Fort Collins became a dry town (no liquor allowed) and remained so until 1969. This local Prohibition shaped the culture and values of Fort Collins residents for 73 years. It also created a townie vs. outskirts-of-town dynamic that often painted county folks as drunks and trouble makers – especially in the early 1900s with the sugar mill workers living in the three colonies just outside of town.

6. A new city charter was adopted in 1954. On October 5, 1954, Fort Collins adopted a new city charter which changed the local government from one in which the mayor ran the city with a 3 member city council, to one in which the city manager oversees the day-to-day operations of Fort Collins, leaving policy to be determined by the mayor and a city-council of 5 members. This form of government encourages open communication between the city-council and community and makes it harder for special interest groups to dominate the local government. Citizen input continues to increase with a growing number of boards & commissions populated by civic minded citizens. The number of neighborhood meetings, surveys, and other events that are designed to capture input from residents on a variety of topics also continue to grow.

7. Hewlett-Packard came to Fort Collins in 1976. HP built a production plant in Loveland in 1960. Then in April of 1976, they bought land in Fort Collins in order to locate their desktop computer division here. The addition of HP, as well as other tech companies such as Kodak and Aqua Tec, helped to grow the number of college graduates in the Fort Collins population, slowly tipping Fort Collins away from being a farm town (which had also lost the sugar industry in the 1950s) towards being more of a tech town. Hewlett-Packard is the second largest employer in the city after CSU. 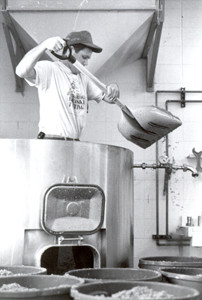 John Legnard was a brewer at HC Berger Brewing (now Fort Collins Brewing), one of the microbreweries that began in Fort Collins in the 1990s.

8. New Belgium Brewing goes commercial in 1991. After a bike tour through Europe in which he was inspired by small batch brewed beers, Jeff Lebesch, began to brew beer in his basement. In 1991, with the help of his wife, Kim Jordan, Jeff grew his hobby into a business, the New Belgium Brewing Company. New Belgium’s success planted a seed in this no-longer-dry town that has inspired a cornucopia of local beer breweries as well as a local beer tourism industry. New Belgium’s commitment to sustainability has also lent its own force to the local bicycle culture.

9. Pat Stryker establishes the Bohemian Foundation in 2001. After falling in love with Colorado and moving to Fort Collins in 1980, Pat Stryker began to become increasingly involved in philanthropy and in 2001 established the Bohemian Foundation, which supports community and music in northern Colorado. The Bohemian Foundation has fostered and supported musical events such as Bohemian Nights (held in conjunction with New West Fest every August and providing free music concerts for a weekend) and FoCoMX (a music event held every April) as well as poured money into the local schools to support creativity and music education programs for kids. Pat Stryker has also added her weight to Democratic concerns within the community, helping to shift Fort Collins away from the extremely conservative foundation that the city was built on and helping to support and strengthen the growing creative, environmentally-conscious culture that exists today. 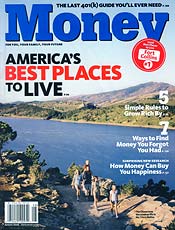 The front cover the of the 2006 August edition of Money Magazine in which Fort Collins was ranked the number one best place to live.

10. Money Magazine ranked Fort Collins as best place to live in 2006. Money Magazine’s ranking of Fort Collins as best place to live in their July 2006 edition was only just the beginning of kudos rolling in for the city. And with the notoriety came increasing numbers of people moving to the area to enjoy the ambiance, community, safety, events, and proximity to nature that Fort Collins provides its residents. To understand what brought Fort Collins to this point, one need only look back through items 1-9 in this Top 10 list. Though Fort Collins is becoming an increasingly liberal town, the strong conservative foundation adds a unique flavor that often isn’t found in other college towns.

Namaqua is now part of northwestern Loveland. There’s still a Namaqua street that hints at where the town was located. Some day I hope to write more about the little town of Namaqua.

The date for the origins of CSU were from the university’s website.

Our change in government is described on the Fort Collins Timeline page for the 1950s.

The history of New Belgium Brewing is on the company website.

A short bio on Pat Stryker can be found on CSU’s website.

I couldn’t find the original Money Magazine article online, but the Denver Post’s article about Money Magazine ranking Fort Collins as the number one best city is still available.

The pictures of early Camp Collins and Old Main are from the city’s historic Collection via the Archive. The photo of John Legnard is Larimer County Water Ways Triangle Review Collection. The front cover of Money Magazine is thanks to CSU’s post on the article.