A Train Runs Through It 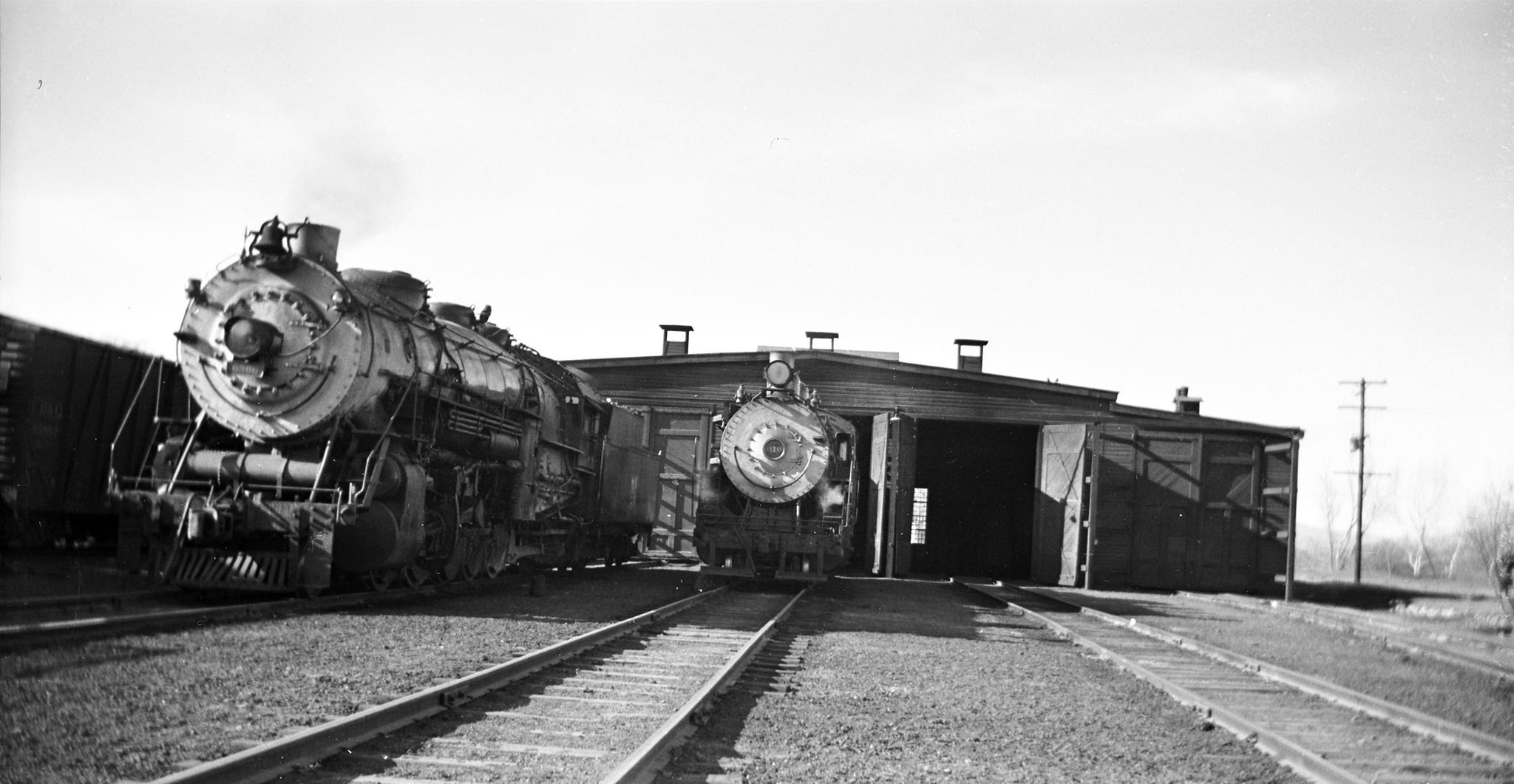 There’s a train that runs right smack through the center of town. It’s one of the first things you might notice coming into Fort Collins for a visit and certainly something that you know all too well if you live on one side of the tracks and work on the other. Oh, how we hate that train – the horn blasting in the middle of the night, the waits as it chug chug chugs through town, the kerchunk of our bike tires as we cross the tracks. But at the same time, I think we love that train. It marks us a true residents of Fort Collins to be stuck on the wrong side of the tracks, waiting to get to the other side. 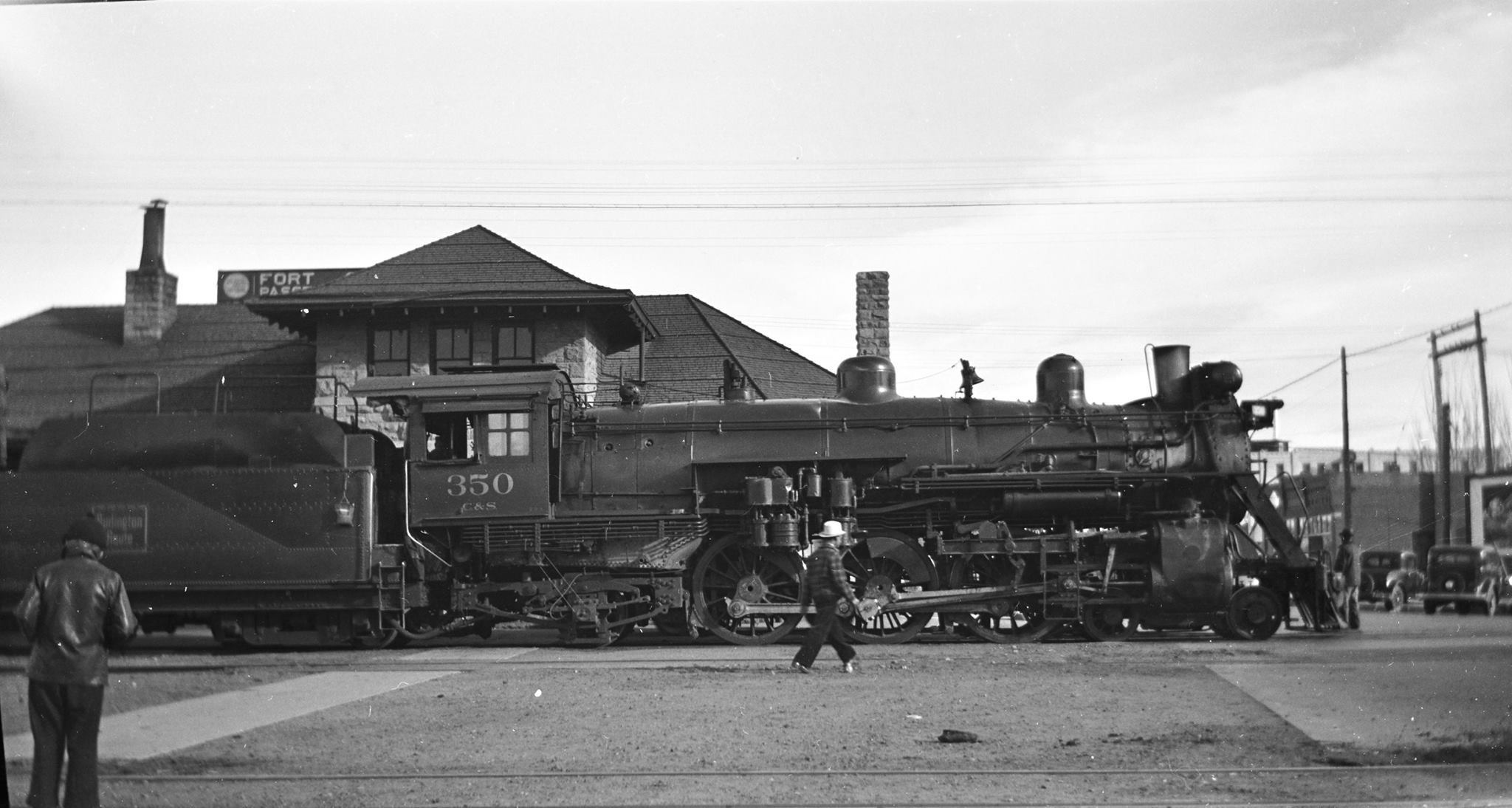 Train in front of the old passenger depot at Mason and Laporte. Photo from Jim Burrill.

The fact that there’s a train running plumb through the center of the city has been written about frequently from almost as far back as I could dig through books and newspapers. So I’ve decided to take a new track. Rather than looking at the origins of the railroad along Mason, I’m hoping to take a wider gauge look at the relationship between the railroad and Fort Collins. 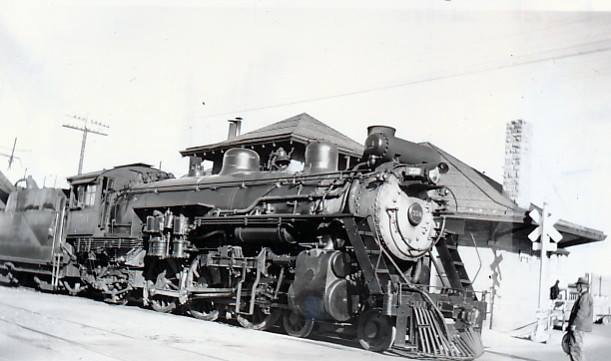 Train by the passenger depot. Photo from Jim Burrill.

In 1869, the east and west coast were united when the Union Pacific and Central Pacific joined together in the first transcontinental railway. It was the beginning of a new era for communities all along the rail line and one that Fort Collins didn’t want to miss out on. So in 1877, the Fort Collins Board of Trustees passed an ordinance that gave the railroad right of way along Mason Street.

I’ve chatted with foamer (That’s another way of saying “train geek.”) Jim Burrill and he speculates that Mason was selected for a couple of reasons. First, the city had started along the river and was growing in a southerly direction. So Mason bordered the edge of town to the west. But given that the agricultural college (now CSU) had just been started a few years previous, the aldermen probably also had in mind that it would be helpful to have a college stop along the rail line. 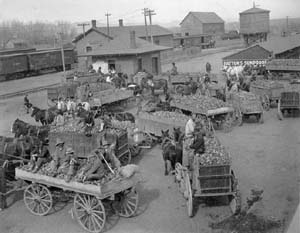 Wagons carrying goods to be loaded on the train. Photo from Fort Collins History Connection.

Before the train came to town, farmers could grow wheat and alfalfa by the wagon-load, but it was a real pain in the caboose to haul the goods over rutted dirt roads to some place where they could actually make a profit. Having a cheaper, more reliable means of shipping their goods was a huge boon to Fort Collins farmers. But it also meant that other goods could be shipped more readily. Many of Denver’s sidewalks in the late 1800s were laid using stone quarried in Stout (where the Horsetooth Reservoir is today). In fact, buildings used in The Chicago World’s Fair in 1893 were made with sandstone from the Stout quarry. That would have been absolutely inconceivable without the railroad as go-between.

“Anyone in doubt as to the importance of Fort Collins as a shipping point should watch the freight train that leaves here for the east every afternoon. These trains carry 20 to 40 cars each, and contain a great variety of merchandise. In the first place there are large quantities of stone shipped daily in the shape of flagging, curbing, paving blocks, dimension stuff, rubble, and immense blocks of red stone destined perhaps for Kansas City, St. Louis, Chicago, New York or Boston. Then there is lumber, posts, poles, flour, feed, wheat, corn, barley, oats, potatoes, cabbage and other vegetables, hay, cattle, sheep, horses, hogs, hides, dressed meat, wool, and a great variety of other truck from our farms, gardens and ranches. Besides the merchandise sent out on these trains, there are large quantities sent south over The Colorado Central and by express on all the passenger trains leaving town. It will not be long before Fort Collins will ship out ore, minerals, marble, plaster, lime, canned goods, woolen cloths, and other products of our future mills, mines and manufactories.” – Fort Collins Express , January 19, 1889

Passenger trains also enabled residents to get around the state and the country. Before the railroad, residents had to take a stage coach first to Greeley, then on to Denver, to catch the train there. (One old advertisement in the Fort Collins Standard claimed that the Kansas Pacific line from Denver was the “only direct route to the states.” This was in 1874, when Colorado was still just a territory and two years before it would join the Union.) Passenger trains ran from 1877 until 1969 when they were finally discontinued. Jim Burrill has posted a very short video of families waiting for passengers to arrive at the Mason and Laporte station in 1963. (I would embed the video here, but WordPress blew its stack at me when I tried, which derailed that idea.)

In 1988, Burlington Northern agreed to move four of their six daily trains from along Mason Street to another track at the edge of town. But then Anheuser-Busch moved to Fort Collins and Burlington Northern backtracked. The grain required for making beer meant additional train service would be required. Other companies that continue to make use of the train include Sutherland Lumber, Gypsum Products, Ranch-way Feed, and even the City of Fort Collins. All service to the Windsor Business Park comes through Fort Collins. There’s a cement transload site that receives around 10 cars of cement a week. And both Home Depot and Lowes get their lumber through a Northern Colorado distribution site that receives it via train. 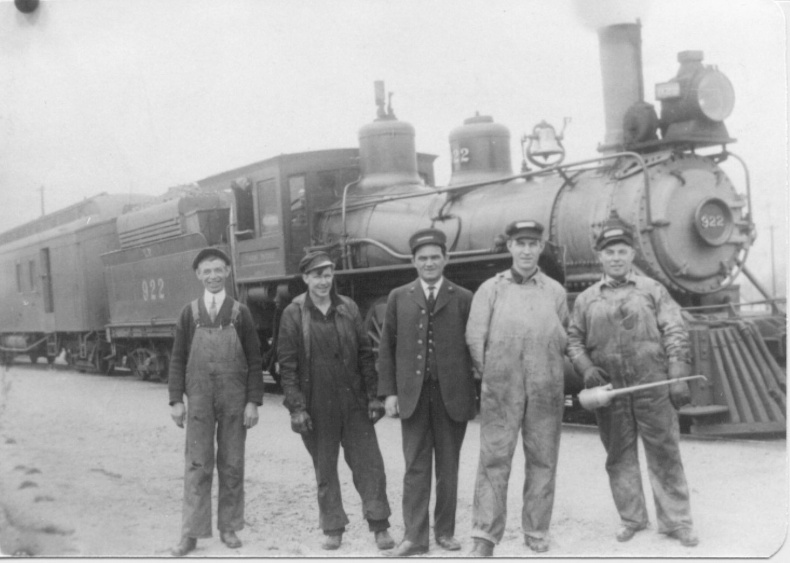 Another great photo from Jim Burrill – circa 1920. 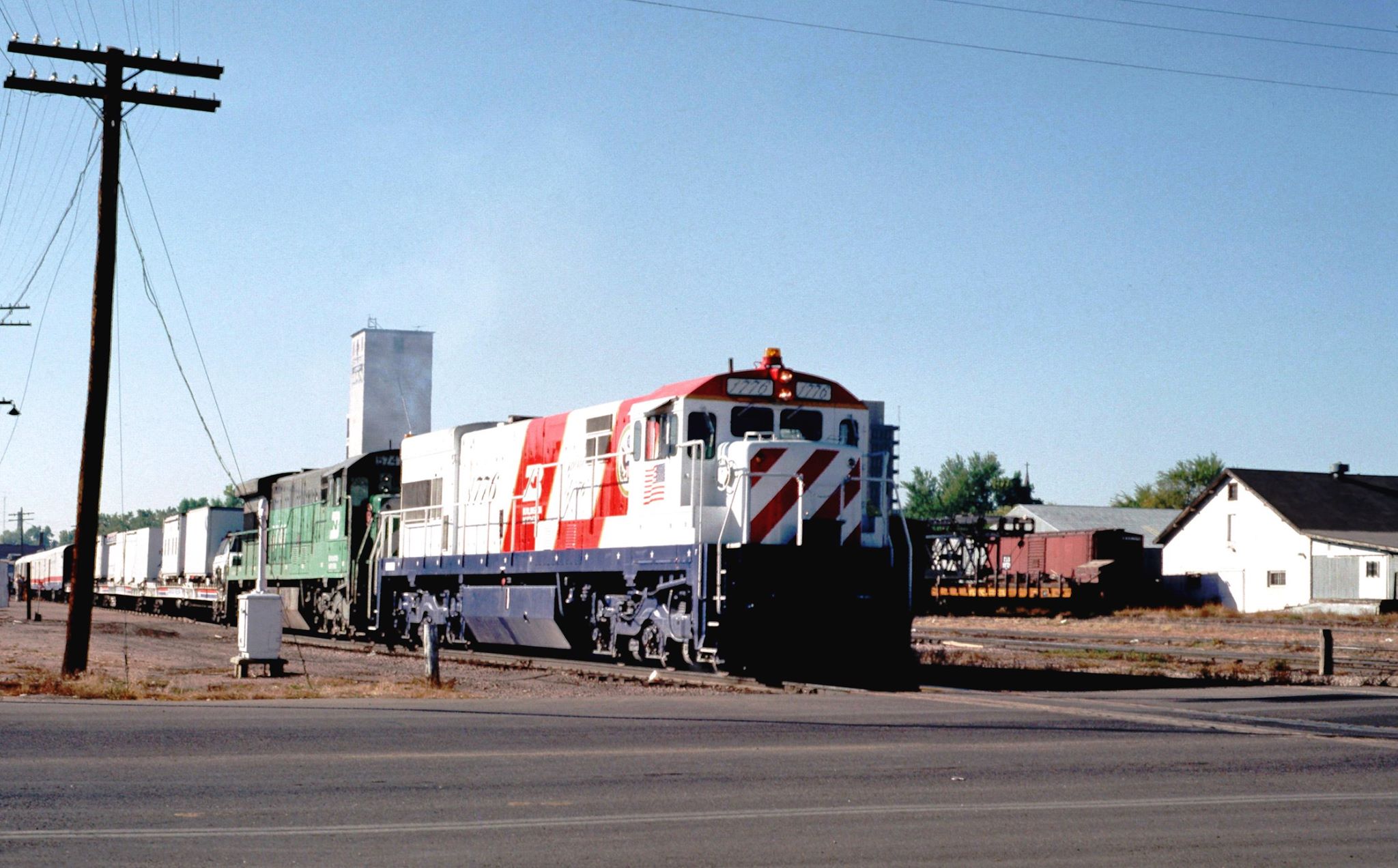 This train was passing through town in 1976. Photo from Jim Burrill.

So go ahead and hate the train every time you see those signal lights flashing. But take some time to also appreciate all that the railroad industry has done for our city, not just back in 1877, but all the way up through today as well.

I simply could not have written this article without the help of Jim Burrill, foamer and 5th generation resident of Fort Collins. Any information above that’s not specifically mentioned below is most likely something I learned from Jim. The man deserves a medal for putting up with all of my questions this past week. Thank you so much, Jim!

Find out more about the First Transcontinential Railroad from Wikipedia. I used this page to get the date that the two rail lines were joined.

I learned about the stone from the Stout quarry being used in the world’s fair through this Fort Collins History Connection page.

Information about Burlington Northern’s switch-a-roo in 1988/89 came from Trevor Hughes’ article “What might have been: 1989 deal would have removed most trains from Old Town Fort Collins.” Fort Collins Coloradoan 7 March 2013. Accessed on 3 April 2014.

I also got some info from another Trevor Hughes’ article “Trains, trolleys a big part of Fort Collins’ history and could be key to city’s future, too.” Fort Collins Coloradoan 2 May 2013. Accessed on 3 April 2014.

The ad about the Kansas Pacific being the only train line back to the United States was from the April 22, 1874 Fort Collins Standard accessed through Colorado Historic Newspapers.

The Fort Collins History Connection has a nice overview of the history of the trains in Fort Collins on their railroad page. I didn’t end up including this, but there’s a great story there about how a snow storm in Walsenberg led to Fort Collins becoming a new hub of lamb feeding.

For my next train related post (which might come some time this summer), I think I’m going to focus on the train lines that are no longer in use. If you have a favorite old line that you like to walk along, let me know and I’ll check it out. My personal favorite is out behind Lincoln Middle School.

And if I haven’t entirely derailed your interest at this point, and you’ve got a few minutes to waste on something silly, I’d encourage you to check out this video of an “Excited Train Guy, New York.”