University Acres: from Farm to Suburb 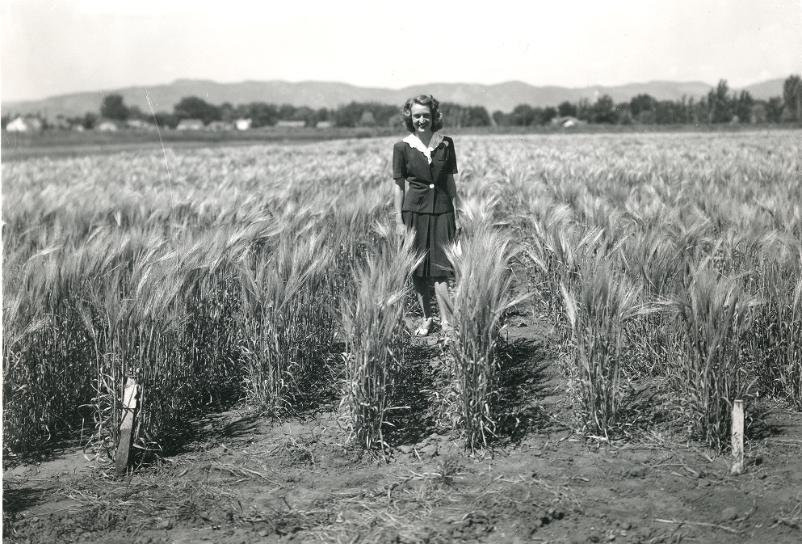 Plots of barley on the college agronomy farm – August 1, 1944. (Photo from the CSU archive.)

When the army first moved Camp Collins from Laporte to the area where Willow and Linden are today in downtown Fort Collins, they were essentially moving to an open plot of ground, most likely inhabited by only prairie dogs and pocket mice. Joseph Mason’s property bordered the new encampment and John Coy’s homestead was just across the Poudre river (where Woodward Governor is building their new facility).

When Camp Collins was closed, a small community had already begun to form. Over time this community grew, and all around it farms began to spring up. Much of what today has been annexed into the city of Fort Collins was at one time an early homestead. But the neighborhood called University Acres is somewhat unique in that it was built not on an old homestead, but on the old Agronomy Farm run by the Colorado Agricultural College. 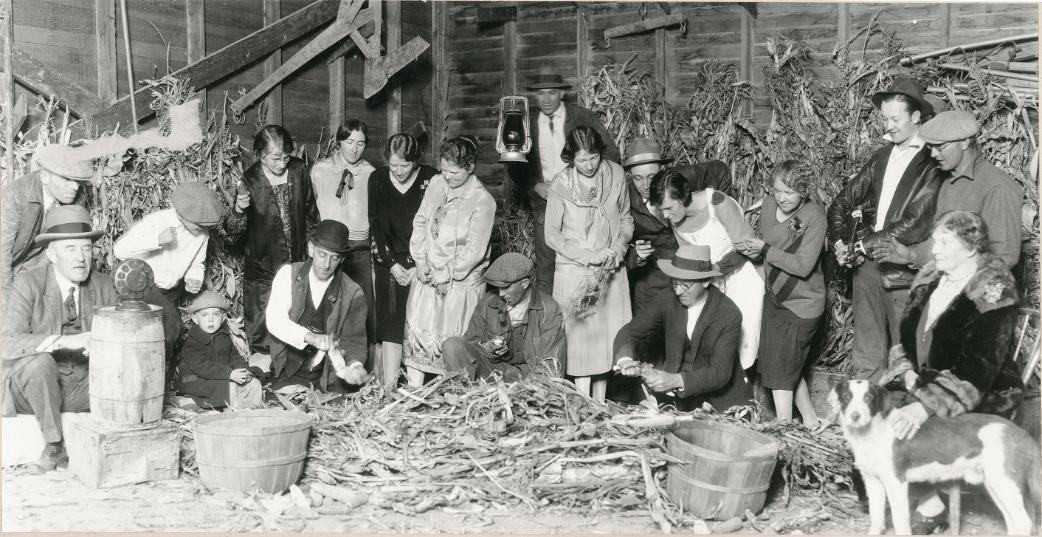 A “Shucking Bee.” Note the radio announcer to the left as well as the people in the back eagerly watching the men shucking corn. February 11, 1928 (From the CSU Agricultural Archive online.)

Even before the college held its first class or had even accepted its first student, there was agricultural experimentation going on. Farming in an arid, high-altitude setting was new to many of the farmers in the state. The Agricultural College acted as a testing ground for what worked and what didn’t. Not only were various types of crops tested for how well they’d grow in the region, but experiments were also done to determine best practices for pest control. Studies were conducted on what worked best for cattle, pigs, chickens, sheep, corn and potatoes. Even tips for baking at high altitude were included. 4-H was a means of not only teaching future farmers, but also teaching parents through their kids. (The parents might be too embarrassed to take a class, but they could often been seen keeping themselves busy just within earshot as their kids were learning something new.)

Fort Collins didn’t have the only testing facility. There were several throughout the state. But it was the people at the Agricultural College that oversaw them all, collected the data that they provided, and then disseminated that information to farmers and ranchers all over the state. People would write in from all over, even from outside Colorado, with questions that they hoped the college would be able to answer. The archivists have even discovered a letter written by George Washington Carver asking a question about birds that he hoped someone at the college could answer. 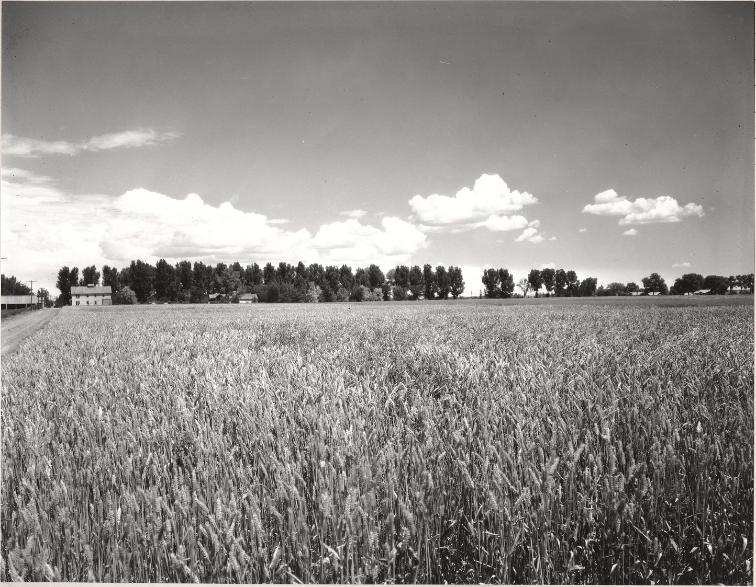 The east farm experimental plots were located where University Acres is today. (July 18, 1932.)
My best guess, based on a 1937 aerial photo of the same area, is that this photo was taken facing E. Elizabeth St. (Photo from the CSU Agricultural Archive online.)

In 1957, CSU decided to move the agronomy farm from its location between Stover and the hospital road. They put the land up for sale and Mae Tiley, with her son Bill, won the bid, buying the land at $2,510 an acre. They partnered with Bob Everitt (who had bid $2,500 an acre) to develop the land, naming the streets after former CSU presidents as well as an important early agronomy professor at the college. 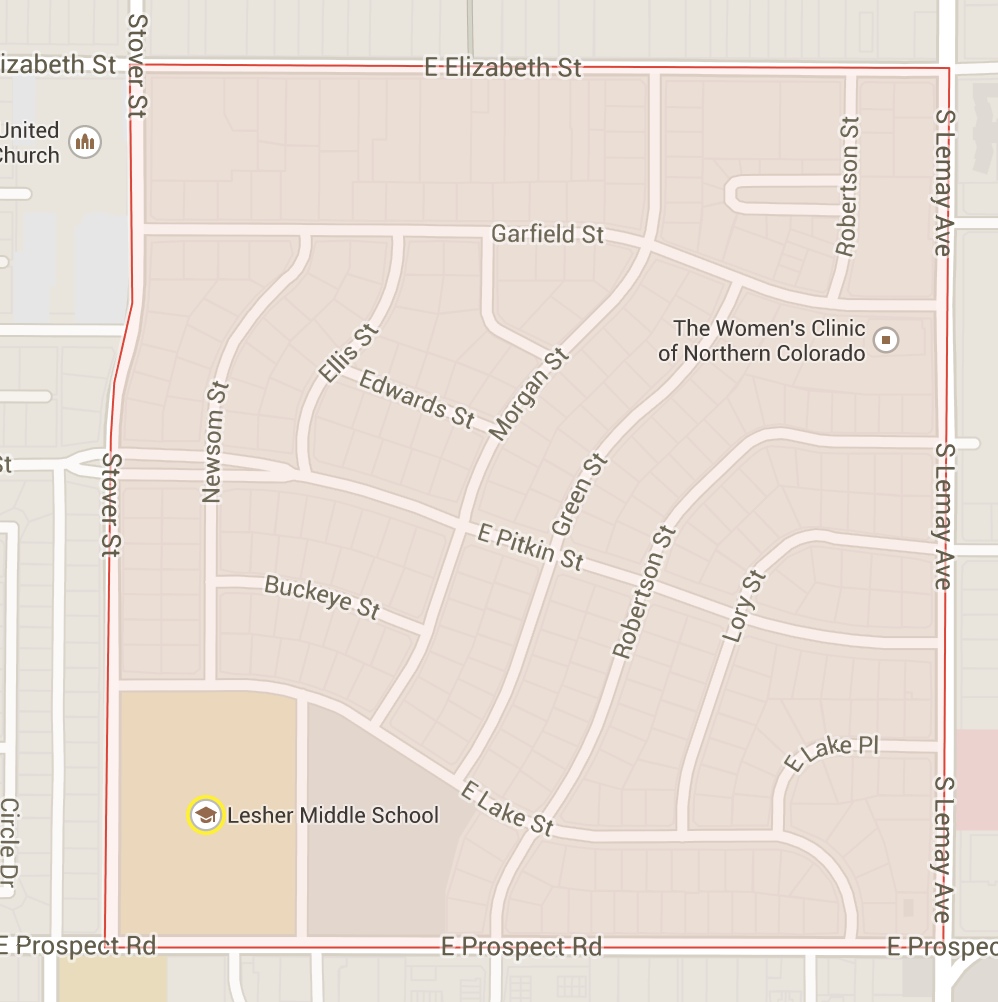 The neighborhood was originally intended to house only residential properties. But then churches, medical centers, and the school district started eyeing that part of town. First United Methodist Church and First Baptist Church (now called LifePointe church) built new facilities within University Acres. Lesher Middle School was built, named after Superintendent of Schools David B. Lesher. And a nursing home and medical center went in near the hospital on S. Lemay. 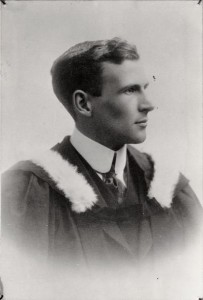 Davis Robertson in March of 1928. (Photo from the CSU Archive.)

The name, Lemay, by the way, came from the merging of the names of Bob Everitt’s father, Les, and Bill Tiley’s mother, Mae, to form Lemay. At least, that’s how Phil Walker tells it in his book, Modern Visions Along the Poudre Valley.

A walking tour of this neighborhood shows a wide variety of ranch, split-level, and 2-story homes that, though different, all seem to speak the same Mid-century Modern language. When I take photos of Old Town houses, I’m often able to make the house fill the entire frame. But that’s simply not possible with these houses. Horizontality is king, which makes the houses hug the ground in a way that Victorian and Craftsman style houses don’t. This draws the viewer’s eyes not just to the house, but to the house in context with trees and sky, which was one of the goals of the Modernist movement – a melding of habitation and nature. 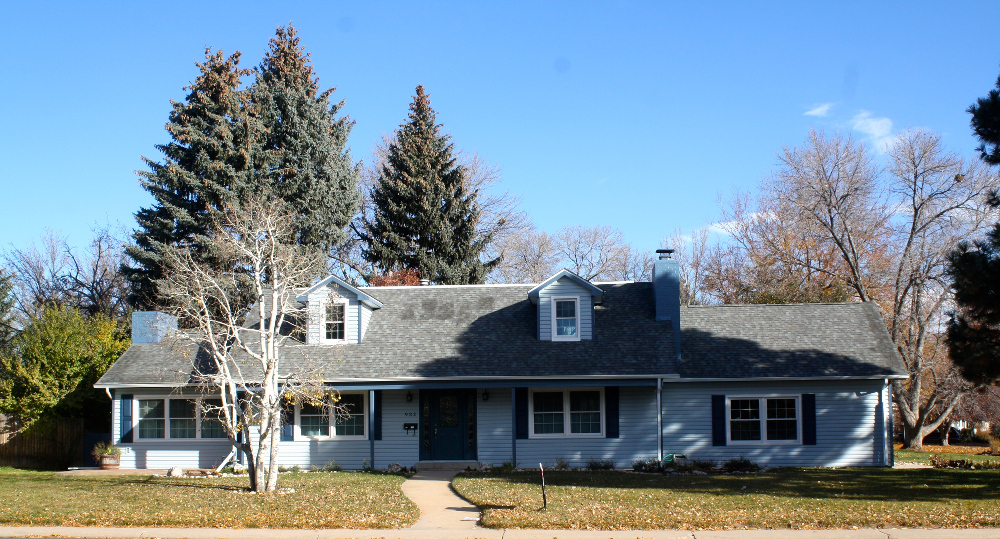 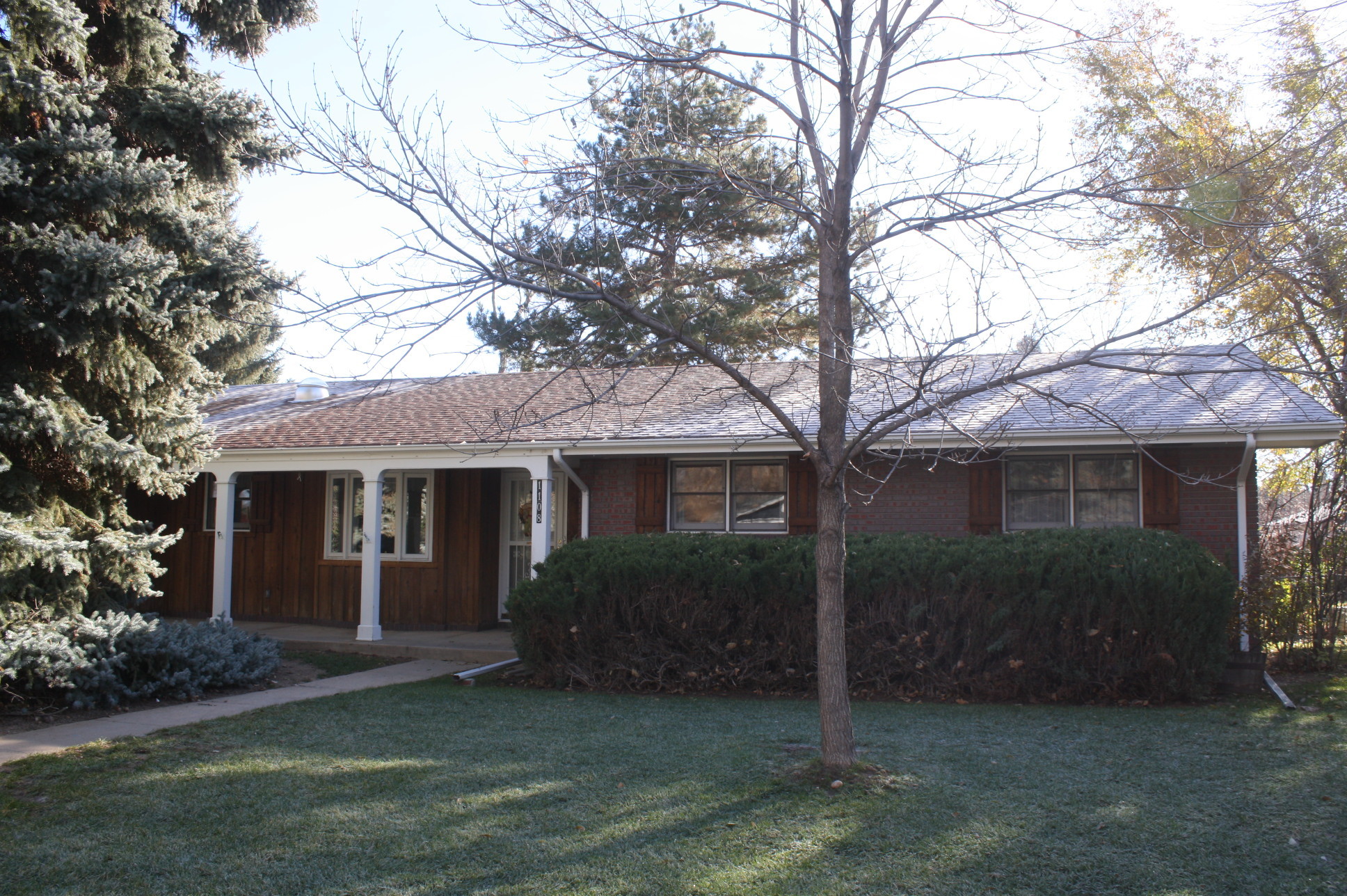 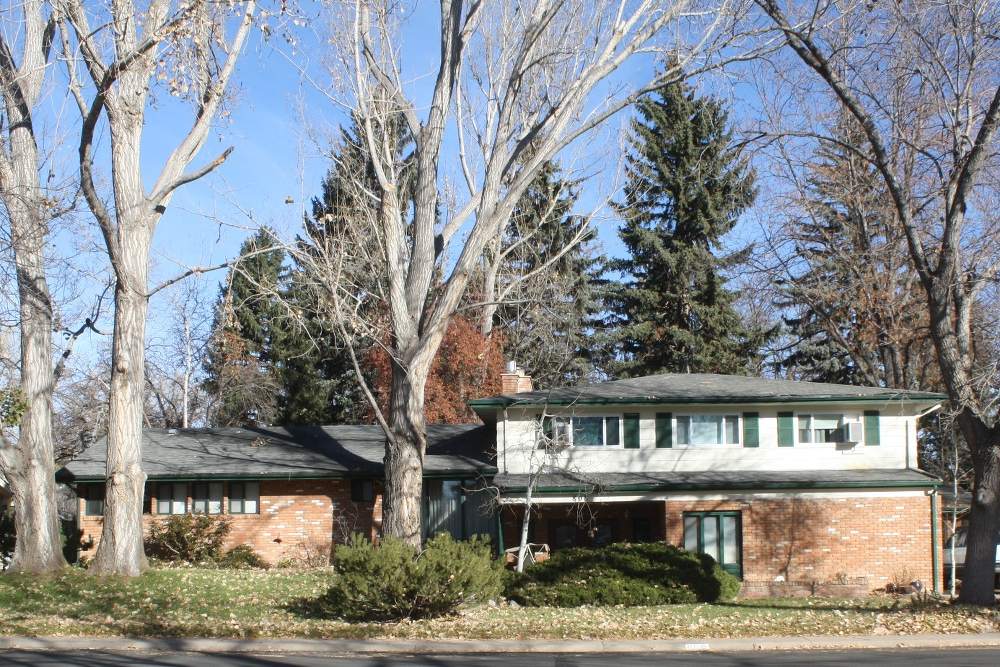 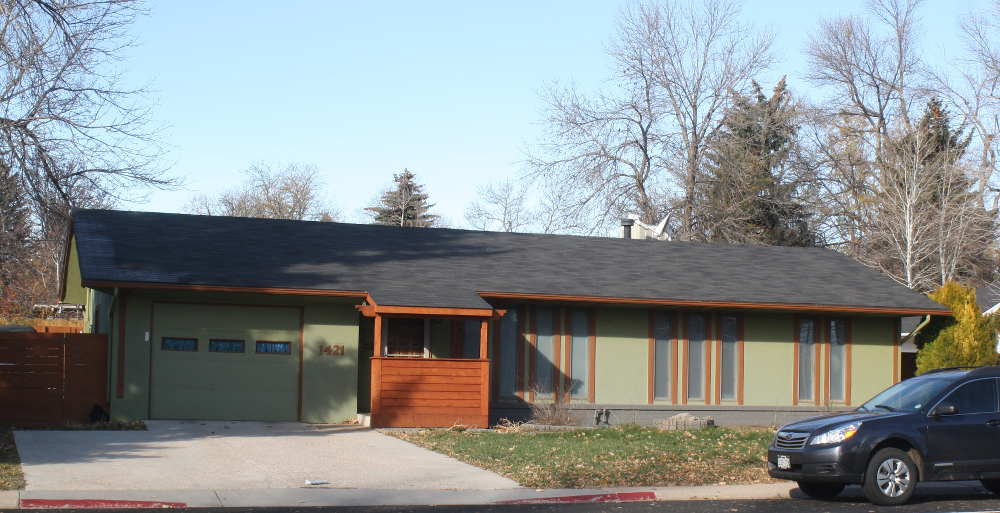 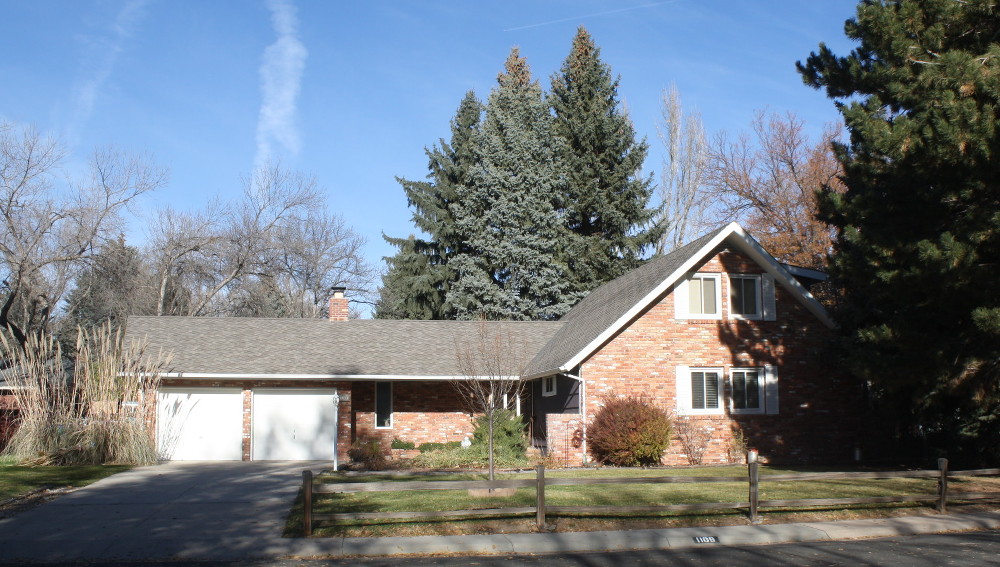 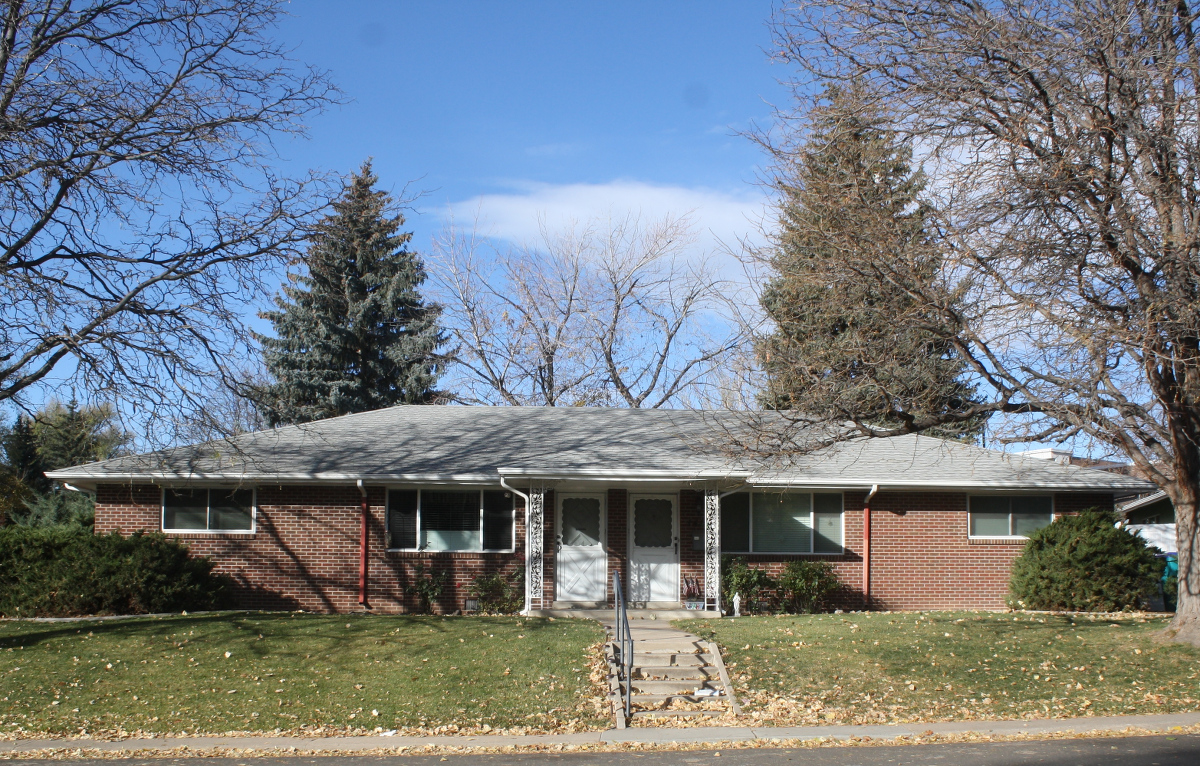 A duplex on 1413 Robertson Street.

There are even more examples of houses from this neighborhood in one of my earlier posts entitled, Post War Architecture of Fort Collins, where you’ll find two houses from Garfield Street and one from Newsom Street.

Walking the streets of University Acres today, you would never guess that the area used to house barley, wheat, and alfalfa rather than people. The neighborhood is even lovelier today than when it was first built thanks to the mature trees that dot the yards. The streets are winding (a suburban trait) and pleasant, the yards are large, and most of the houses retain their original architectural features, adding to the overall ambiance of the area. This is a neighborhood that has only grown more beautiful with age.

The information about agricultural experimentation, studies, and education all came from a wonderful talk given by Linda Meyer, an archivist with Colorado State University, to the Fort Collins Historical Society on January 8, 2015. (If you’re interested in local history and you’re not attending the historical society meetings, you should be. All three talks so far this year have been really excellent and well worth attending.)

For a full list of CSU presidents, all the way up to Tony Frank, check out the presidents page on the CSU website. There are some pretty stylin’ mustaches on that page.

For information on Davis W. Robertson, I searched Ancestry.com which listed his nationality and workplace in the 1930 and 1940 censuses. (Is that the plural of census?) I also found the photo of Robertson on the CSU online digital archive – Print #5295.

It was Phil Walker’s book, Modern Visions Along the Poudre Valley, that gave me details about the purchasing and developing of the land by the Tileys and Bob Everitt. You can check out a copy of the book from the Poudre Public Library system.

It was a Greyrock Realty page that made me realize the streets were named after former Agricultural College presidents.

The Everitt Company is still around and is now being run by Bob Everitt’s sons, Dave and Stan.

The map of the neighborhood is from Google Maps. Did you know that you can do a search on a neighborhood by name and it’ll draw the little line around it for you? OK, so it’s not always exact, but it’s still rather handy.

Thanks, Whizbo, for pointing out that I’d utterly failed to include the location of the neighborhood when I first published this post. *sigh*