Fort Collins by Design – Four Design Perspectives Within Our City 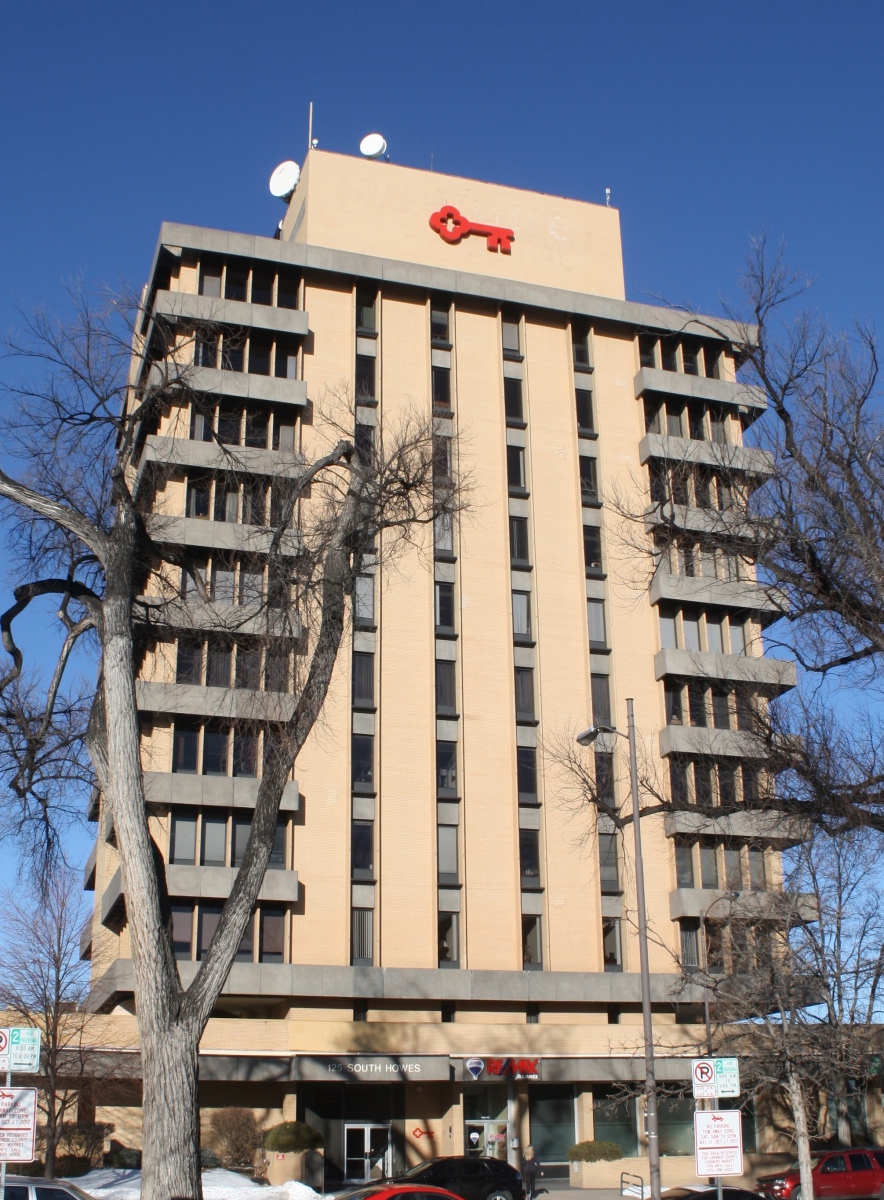 The height of the Key Bank building helps it to conserve land. That is… it would if the land it conserved wasn’t entirely taken over by parking lot pavement.

I’m taking an urban design class online called Designing Cities. It’s offered by PennDesign through Coursera. (It’s a free class. You can still sign up and watch all the videos if you find this sort of thing interesting.) It’s gotten me to start looking not just at buildings, but also at the spaces between them. Are they smack up against each other (like the shops in Old Town)? Or is there space between each building (like we see with the Key Bank building, Target on Troutman, and Intel near Ziegler and Harmony)? How do the streets and other transportation lines interact with the buildings and the public spaces? And how has the natural environment been included in our built design patterns?

Our first assignment in the class was to find the different types of urban design styles in our own city. What I found particularly interesting is that though there were certain time periods where this type or that type of design was en vogue, and that’s reflected in our town, overall it seems like we have a pretty balanced approach to how our city has grown over time.

Traditional Urban Design includes a love for symmetry, long vistas, parks and boulevards, plazas, and above all, an overall human scale to development. A grand example of Traditional Design in Fort Collins would be the Oval on the Colorado State University campus. 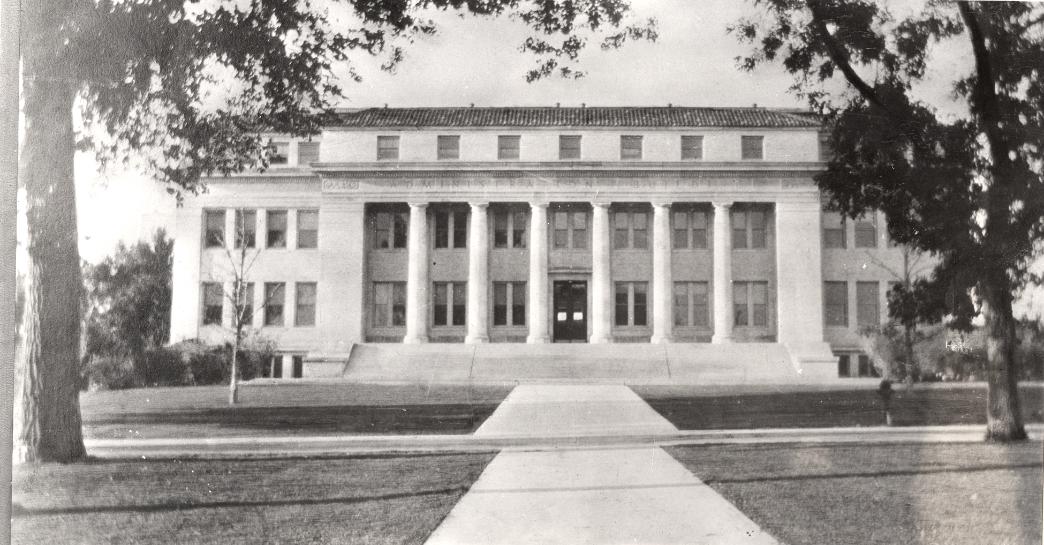 The symmetry of the oval and the vista created by Howes flowing into Shady Lane, all serve to focus the eye towards the grandest building of them all on the old campus, the Administration Building. (Photo courtesy of the CSU Archives & Special Collections department.)

During the early 1900s, there was also a development within the Traditional Design style called the City Beautiful Movement. It focuses especially on parks and grand tree lined boulevards. Mountain Avenue with its tree lined islands of grass along each block, and City Park, the first such expansive park in the city, are both examples of the City Beautiful Movement finding expression in what was, at the time, still a very small town. 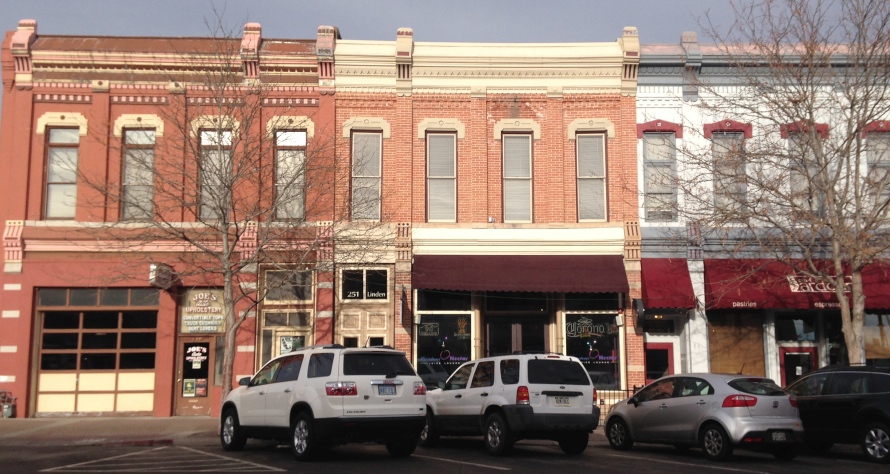 Grouping buildings closely together (so that you don’t have a long distance to walk from one to another) and building them at a height that doesn’t hurt your neck to take in the whole of the building, are both aspects of building at a human scale, as shown by these buildings on Linden Street in the Old Town Historic District.

Traditional design isn’t just a thing of the past, either. The city council has approved a general concept proposal of an expanded civic center. (Although they’ve approved the general plans, the specifics aren’t set in stone. There currently isn’t enough funding available to pull off all of the changes shown in the image below. But they didn’t want to make any changes at all until they had a concept of what the whole would eventually look like. So think of this more as a general end goal rather than a definitive plan.) 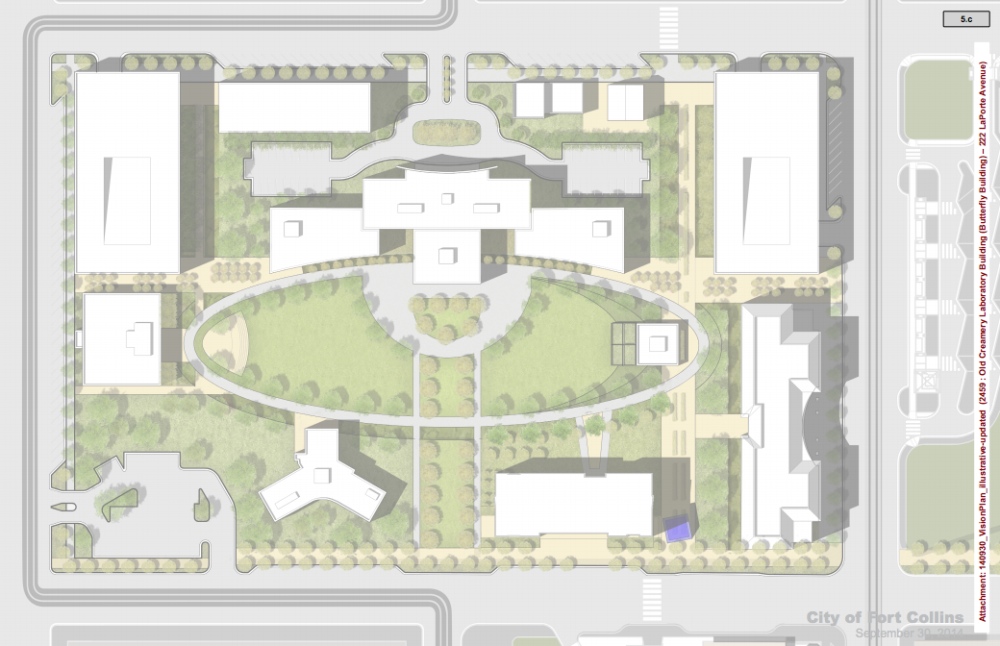 This image was taken from the Landmark Preservation Commission agenda for October 8, 2014. The LPC discussed the movement of the only remaining creamery building (in purple/blue near the bottom of the image) to a point slightly further back and further east along Laporte Avenue. The City Services building (just to the left of the creamery building) will be going up soon.

Note the symmetry of the oval walkway in front of the proposed new City Hall. The ending of Howes Street and continuation instead of a pedestrian path mirrors the scenario at the Oval on the CSU campus. Note also the symmetry expressed in the City Hall building (just north of the oval) and the two parking structures that are proposed to go in at each northern corner. All of these are classic examples of Traditional Design.

I tried to think of examples of Traditional Design in Mid-Town or on the south end of town, but nothing came to mind. If you can think of an example, please add it in the comments section below.

Le Corbusier, a French architect, was one of the pioneers of the Modern architecture and design movement. Looking for efficient ways to house large amounts of people, he envisioned a grand plan of tall buildings surrounded by green spaces. 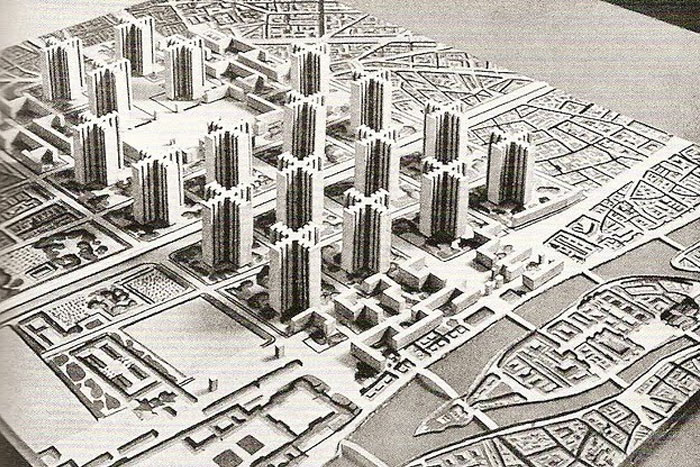 The Ville Contemporaine (meaning Contemporary City) was designed by Le Corbusier in 1922, but was never built. It was intended to house three million people. Repetition of form was important to Le Corbusier as well as access to buildings via automobile.

Fort Collins embraced this vision in the 1960s and 1970s with the Key Bank building (see first image above), the First National tower, the two Parklane Tower buildings, DMA Plaza, the Old Town Professional Center, and Westfall and Durwood Halls on the CSU campus.

Durrell Center and Westfall Center on the CSU campus.

The ideal would be for each towering structure to be encircled with a park like area, with speedy arterials and other forms of transportation bringing people to and from these large buildings. Le Corbusier seems to have forgotten that highways full of arriving cars would require somewhere for those cars to park. So in Fort Collins, many of our tallest structures are surrounded not by beautiful greenery but by expansive parking lots.

We still seem to prefer this Modern form of design and examples can be found all over town. Though we no longer tend to build to the heights achieved in some of these older buildings, we still prize the idea of distinct buildings surrounded by greenery as seen with the technology center near the intersection of Ziegler and Harmony.

It’s important to note that we’re talking about design, not architecture. Though I’d argue that these technology buildings still fall under the general category of Modern architecture, they’re not the sometimes butt-ugly buildings of yesteryear. (And some of those butt-ugly buildings do have a certain sort of charm once you understand what the original vision and ideals were.) HP could have built Post-Modern buildings, or even something in a grand old Romanesque style or some other “old-fashioned” style, and yet if the overall layout remained the same as what is shown above, would still be considered Modern Design. That’s what I meant at the beginning when I said that I’m learning to look not just at the buildings, but also at the spaces in between.

Green Design can be seen in the City Beautiful Movement of Traditional Design as well as in the islands of green that Le Corbusier envisioned around his high rise buildings. But it’s grown to embrace much more than that. Making cities more bikeable and walkable, improving public transit, preserving solar access so that all buildings can be lighted and heated in part by the sun even in winter, and encouraging more mixed use facilities so that people can live near where they work, shop, or eat are all pieces of what is meant by Green Design. 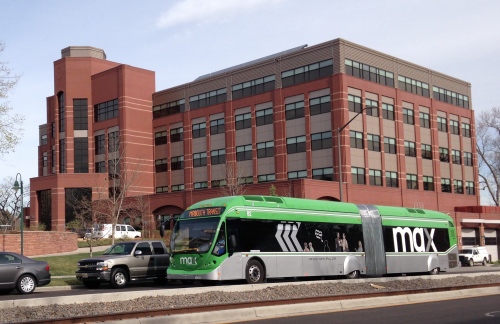 MAX transit, and the rerouting of other transit lines and bike trails to connect with it, will go a long way towards determining where growth in the city occurs in the coming years.

In addition to the examples I’ve already given above regarding historic Green Design in Fort Collins, an important new project is the MAX transit system. By encouraging infill development along the Mason Corridor, the city is aiming to reduce sprawl, which will in turn save the city money as less new infrastructure must be developed to deal with a constantly spreading city. Multi-use and dense projects are encouraged as a means of providing walkable communities that will require less reliance upon the automobile (thereby resulting in cleaner air as well as fewer funds needed for street maintenance and upkeep). 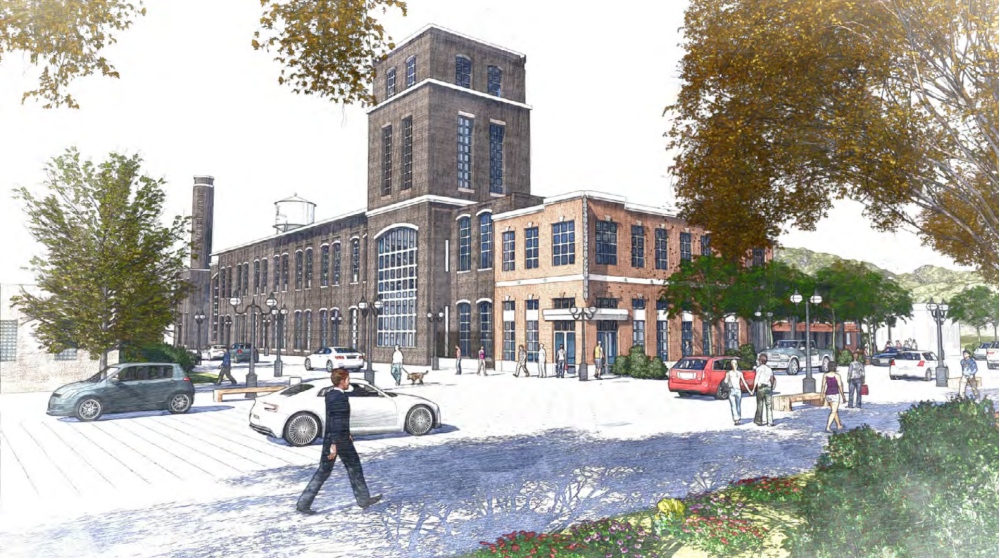 This is a preliminary sketch of the Old Elk Distillery that’s been proposed for the corner of Linden and Willow at the heart of the River District. (This image was taken from the Landmark Preservation Agenda on September 24, 2014. These agendas are available to the public and can be found on the LPC page of the city website.)

Infill doesn’t need to happen just along transit routes to be effective. The city is encouraging infill where there are abandoned or unbuilt lots. There are several new and proposed projects in the River District (the area between College and Lincoln just south of the river). Anywhere that infrastructure already exists but there are empty spaces that can be built upon is a good place for infill because it reduces infrastructure costs for the city and means that those areas will become more walkable than they’ve been. (Midtown Gary recently posted about several mid-town infill projects on Facebook. This isn’t just an Old Town or Mason Corridor phenomenon.) 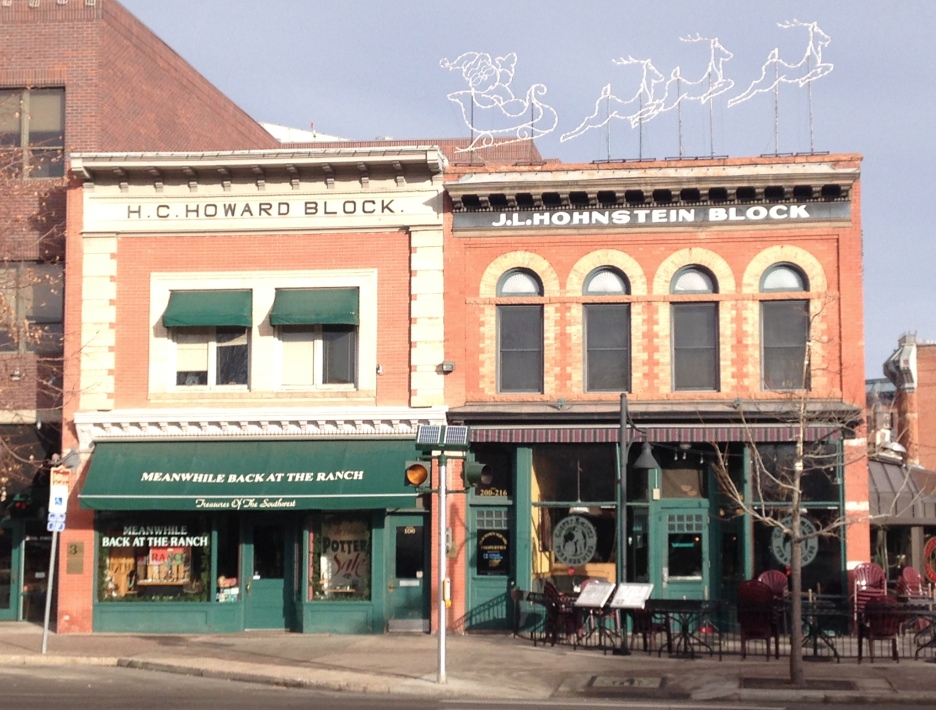 The Howard and Hohnstein Blocks are both part of the Old Town Historic District.

Near and dear to my heart is historic preservation, which can also be an important part of Green Design. By finding ways to renovate old buildings rather than tearing them down and rebuilding, a lot less waste is added to landfills, the energy that was put into making the bricks or other components of the building is conserved, and often times a human scale is also preserved which helps to encourage pedestrian pursuits.

The fourth type of Urban Design involves systems of things, such as transportation systems, water and sewer systems, bike trail systems, etc. and how they affect the way the city grows. One of the earliest systems in Fort Collins and the surrounding area was the ditch system, which enabled agriculture that otherwise wouldn’t have been possible in our arid climate. 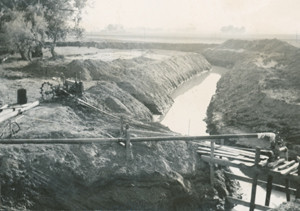 This undated photo from the city Archive shows a ditch that watered the Akin farm located on South Shields.

There’s a lot more planning that goes into how our city looks than is often apparent to the average resident. One thing that I love about Fort Collins is that you don’t have to have a degree in city planning to share your thoughts and opinions with the city planners. If you would like to know more about what’s going on in Fort Collins in terms of planning and development, I’d encourage you to check out the Development Review page on the city website and especially to sign up for the weekly email that is sent out alerting residents to new projects being considered all over town. The more involved we are as citizens, the more our city will grow up reflecting who we are as a community.

To find out more about Coursera, check out their website. They offer classes in many subjects. Classes are free, although certification of completion can be achieved for a nominal sum.

The image of the Ville Contemporaine was taken from a Sourcable.net article by Mercedes Martty entitled, “Four Failed Modern Urban Planning Designs.” You can find out more about Le Corbusier on the Wikipedia page about him or check out this Artsy page. And I got the information for the subtitle to the image of Ville Contemporaine from the Wikipedia page on the project.