The city of Loveland has an incredibly beautiful self-guided walking tour brochure that takes the reader first on a commercial, then a residential, tour of historic Loveland. I’ve written about the pamphlet and the commercial part of the tour in a previous article: Walk Historic Loveland – Downtown. So if you missed that post, you might want to start there.

The second half of the self-guided tour focuses on the residential neighborhood just to the west of downtown. It covers two churches, one store, one school and several historic homes, including some of those in the West 4th Street Historic District as well as the West 5th Street District. If you’re interested in the history of the properties covered here, I’d encourage you to get a copy of the Walk Historic Loveland guide as I won’t be resharing all of the details that are included with each property listing. 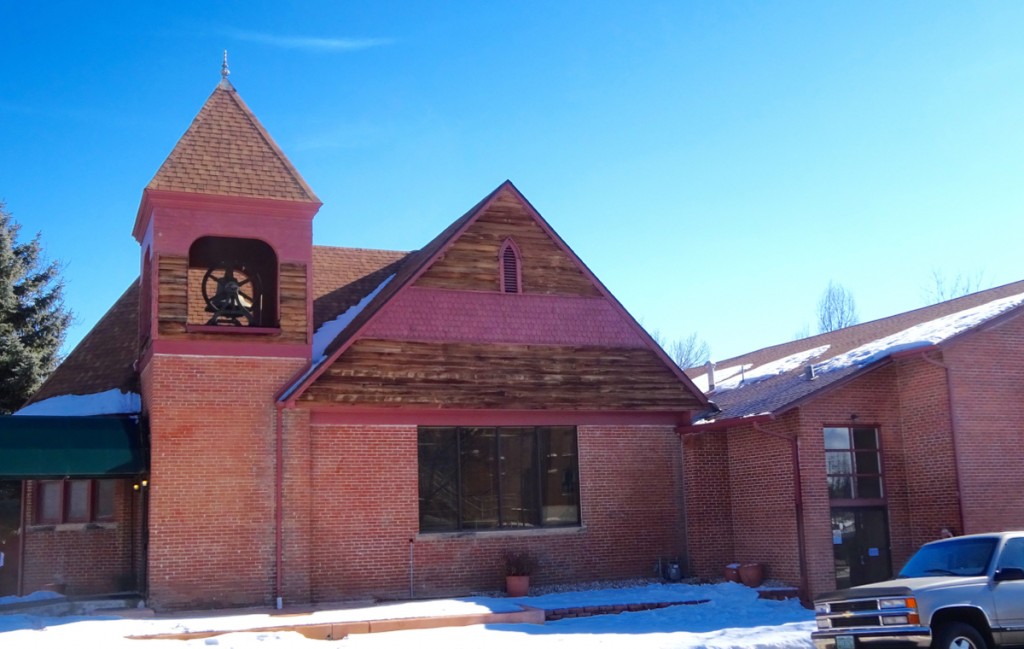 The tour starts out at 4th and Grant with the old First Presbyterian Church, an interesting mash-up of early 20th century church architecture with a mid-century addition (to the right, and mostly not included, in this photo). In hopes of getting a little more information on the building, I searched the National, state, and local historic landmark lists to read the nomination form for this property, and it doesn’t appear to be listed in any of them. So I guess the upshot here is that some buildings were included in the tour that have historic significance, but that haven’t been designated yet as landmarks. 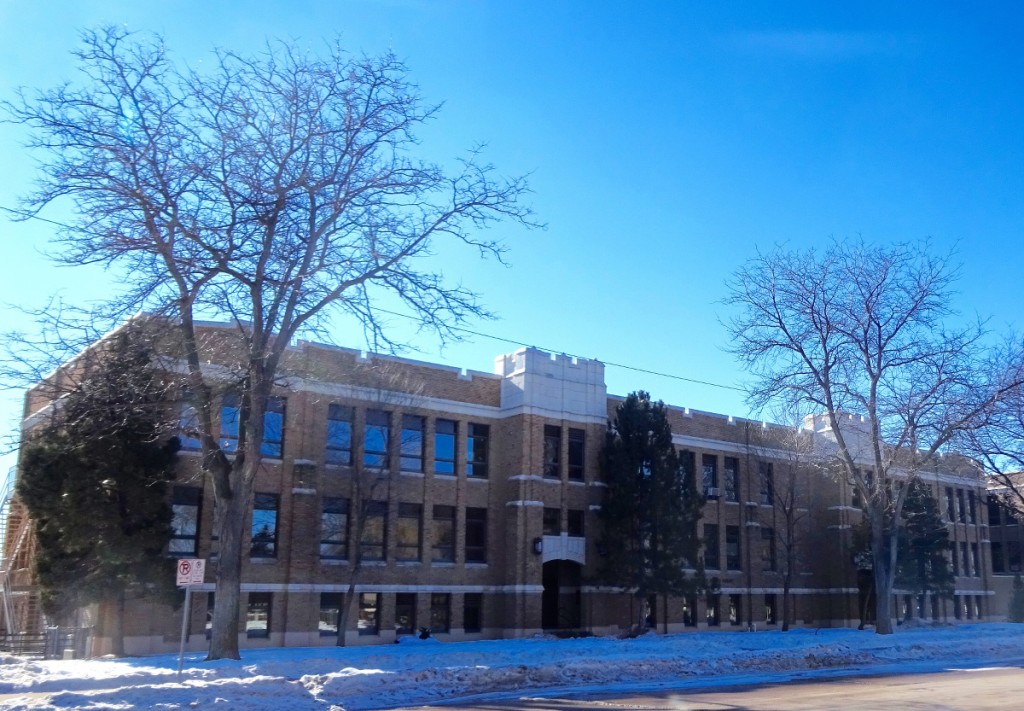 Loveland High School is now Bill Reed Middle School. And it, too, couldn’t be found on any historic landmark registers, although it was mentioned as a preservation win in the City’s 2002 Historic Preservation Plan document.

Loveland High School was built in 1918-19, during the same time that the Rialto Theater was being constructed downtown. 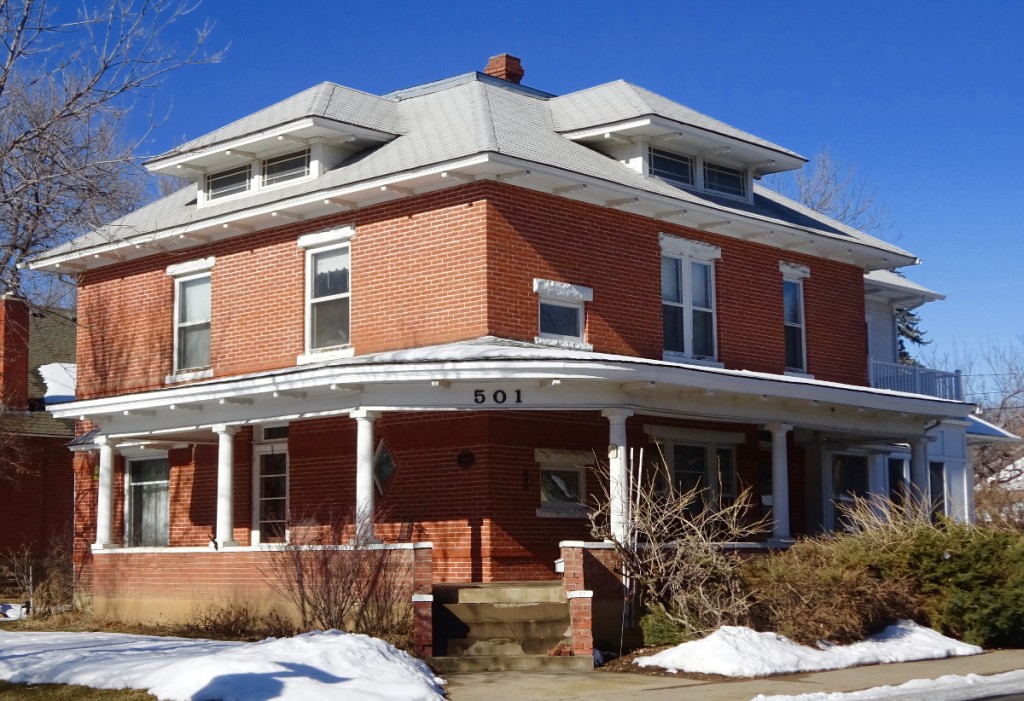 The Jeffrey house is beautiful from any angle. I particularly enjoy the symmetry of the roofline with the matching hipped dormers. They seem to add a sense of stature to the house. 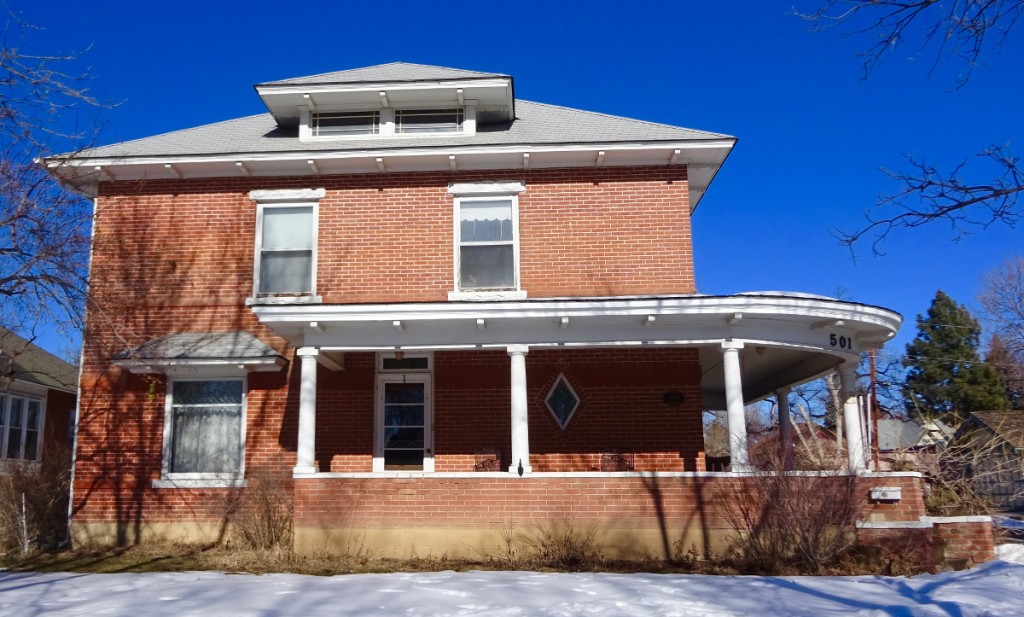 The Jeffrey House from the front – 501 West 4th Street.

Mr. Jeffery ran a Drug Store on the 400 block of Cleveland Avenue in the early 1900s. 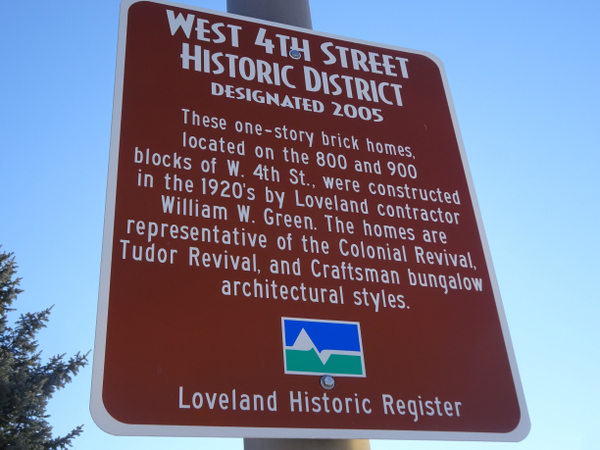 There are signs for the West 4th Street Historic District at either end of the district.

There was a few blocks gap between the Jeffrey house and the next one on the tour. But before reaching the next house, I noted this historic district sign. There’s one standing at either end of the 800/900 blocks of West 4th Street. 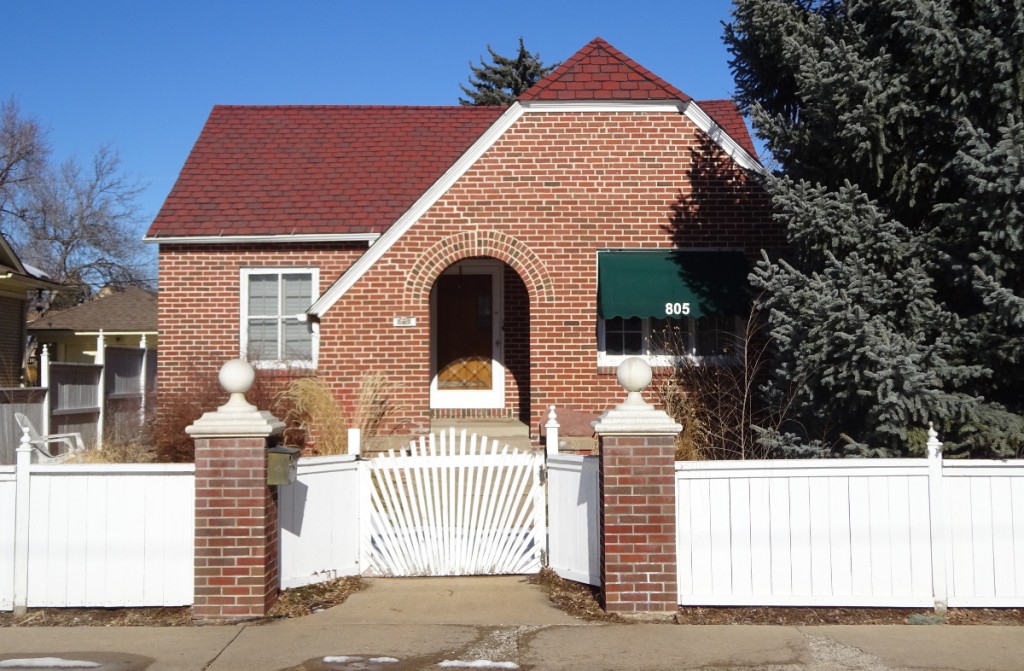 Elmer Ivers was the mayor of Loveland twice and was a key player in creating Loveland’s Valentine Remailing Program (which will be celebrating its 70th anniversary this year!). He lived in this house for close to forty years. 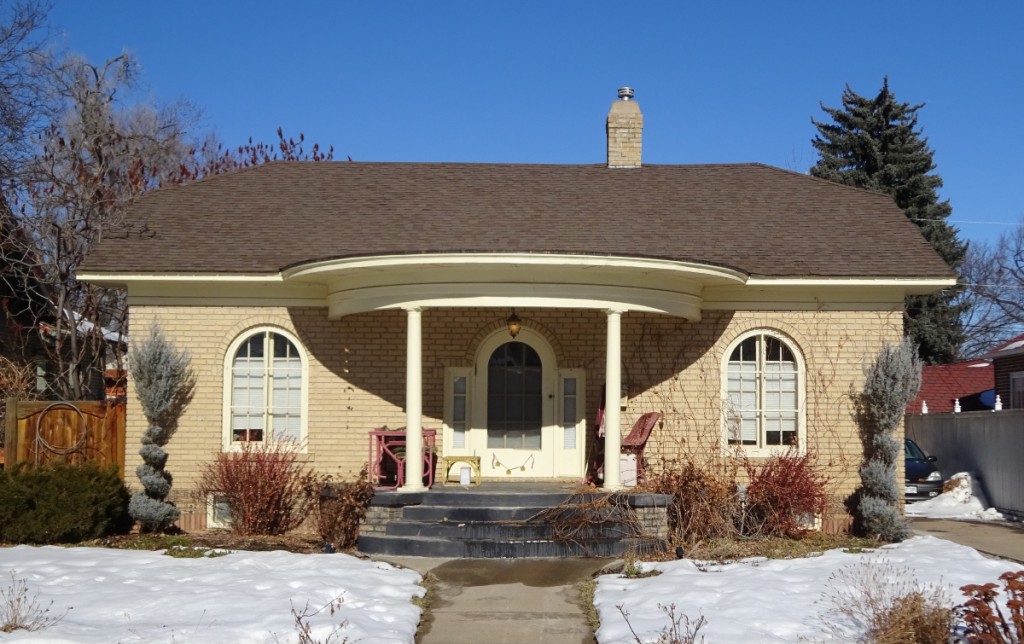 Every house in the West 4th Street Historic District was built by William W. Green. As you look through these photos, you’ll notice quite a variety of designs, though the houses are all of the same basic size and height. According to the tour guide, Green built around 150 homes in Loveland. 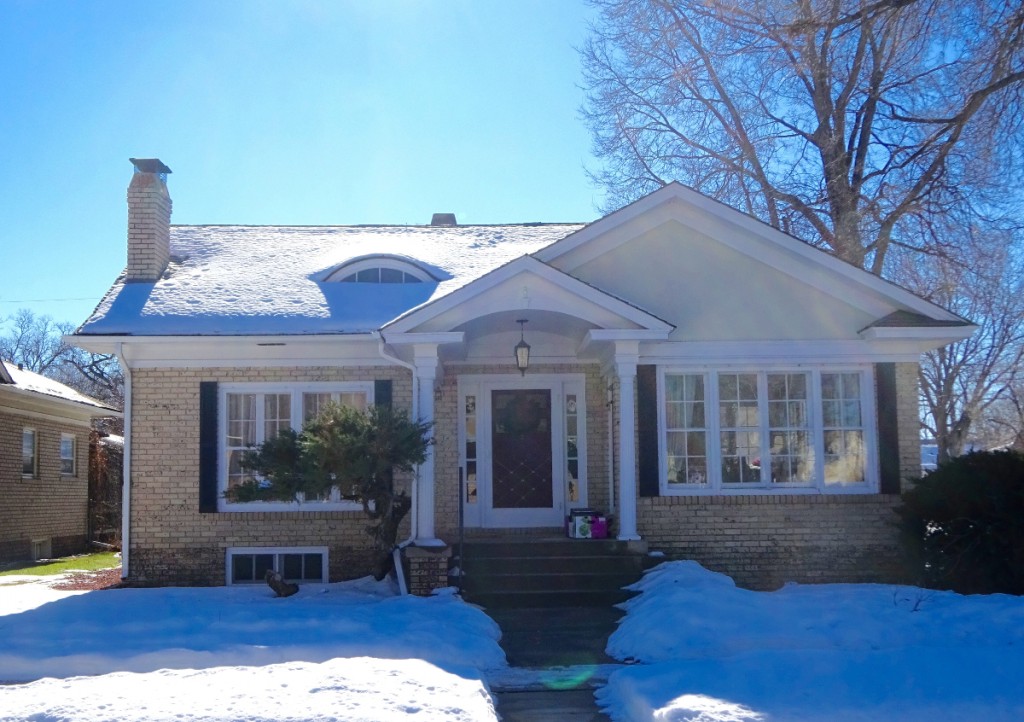 Note the little rounded window popping out of the roof just left of center on this house. That’s called an eyebrow dormer. You don’t see these anymore in most modern day construction, but they do add a bit of whimsy and charm to older homes such as this one. 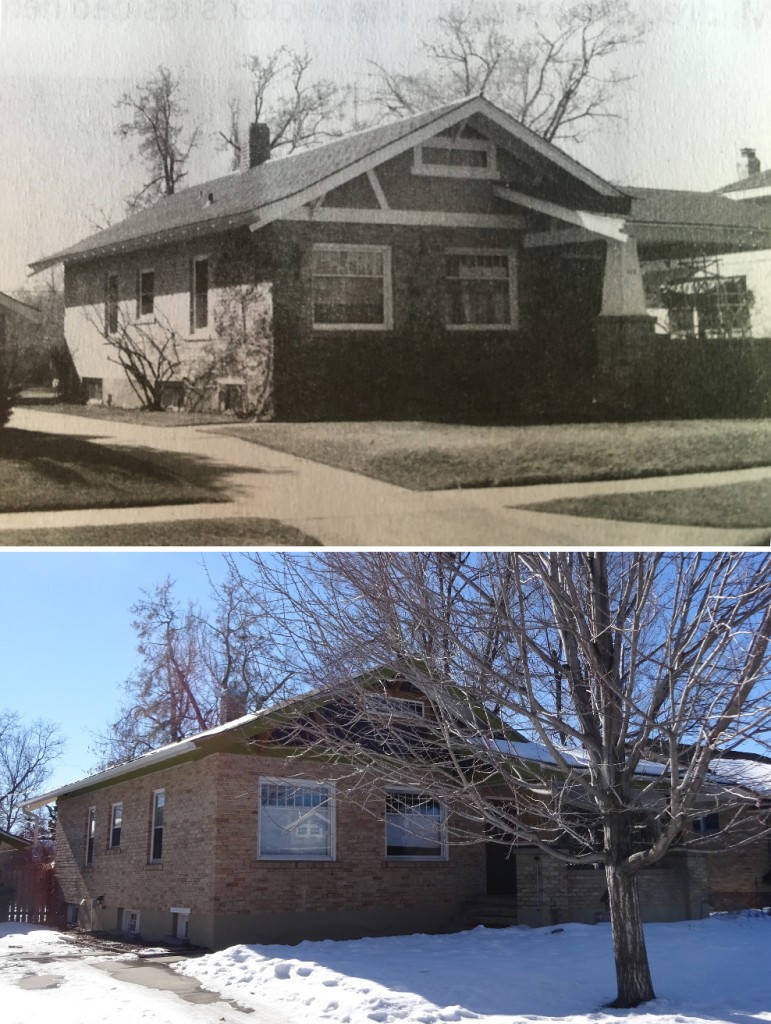 I don’t know why I didn’t walk around to the other side of the house and snap a photo without the tree in the way, but since the angle I got matched the angle of the photo in the walking tour guide, I thought I’d create a Then & Now comparison out of the two shots. 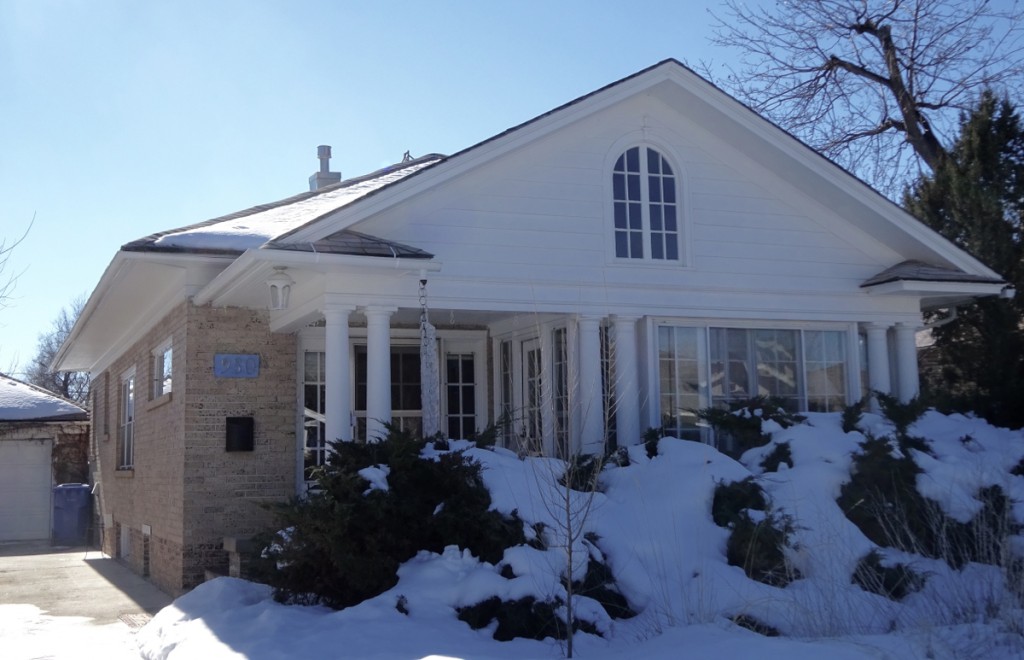 The Classical Revival porch on this house turns what would otherwise have been a pretty basic bungalow into a rather grand looking little house. 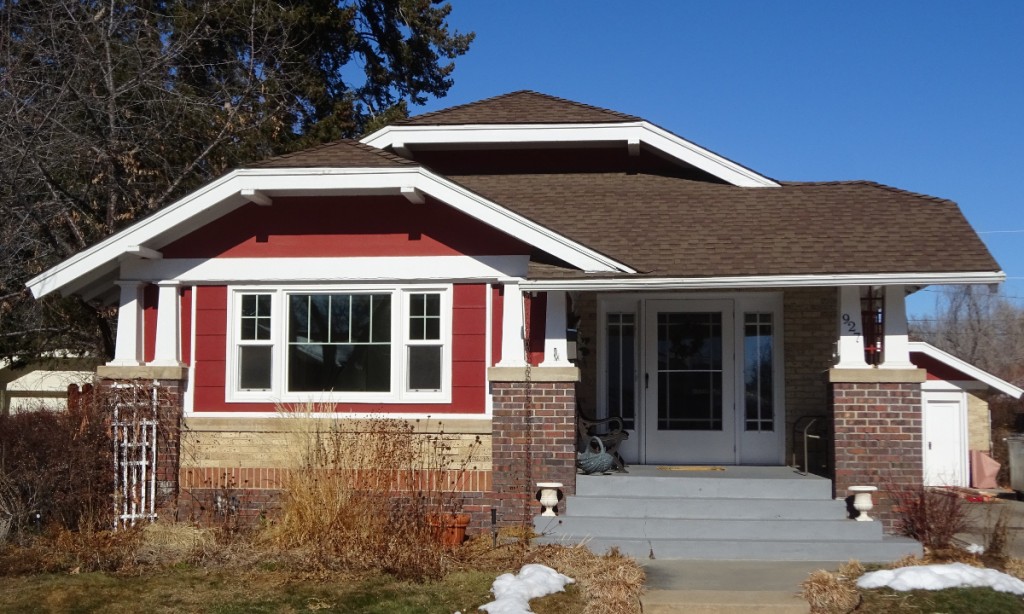 The repetition of hipped gables helps to give this house a low profile, and the deep porch provides welcome protection from the sun during summer months. 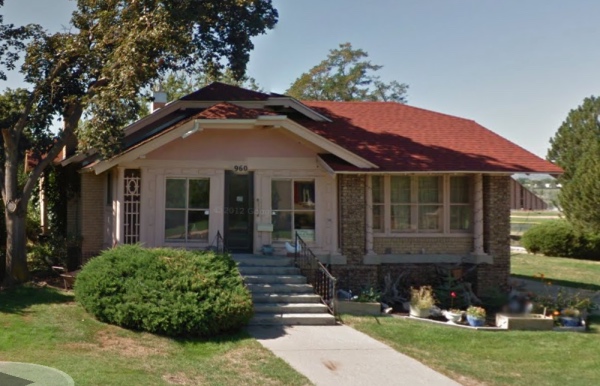 The photo I took of the Green House came out as a major blur. I think the sun hit the lens right as I took the shot. So I snagged an image from Google Maps for this house (and the next, which I somehow managed to miss entirely).

The wood trellis that’s built into the porch of the house just to the left of the front windows was also around in the older picture of this house that’s shown in the tour guide. I assume that it’s original.

This house was not only built by the same builder as the other houses in this historic district, but William Green built this particular house for himself and his family. They lived here from 1924 until the late 1930s. 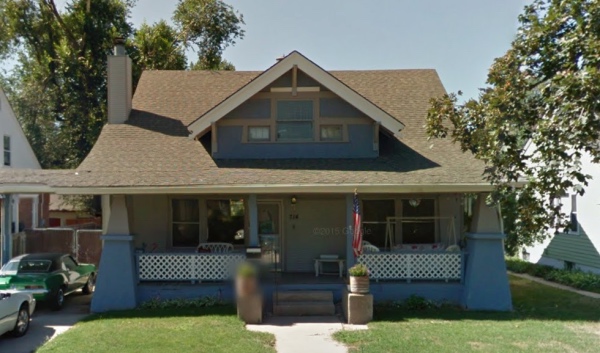 Somehow I managed to miss this house entirely while I was walking on the tour. The houses on West 5th Street seemed to (on average) be a bit larger than the houses on 4th.

During the Depression, the owners Raymond and Mabel Darling converted their home into an apartment house. They continued to live here while renting out the apartments. It was later converted back into a single family residence. 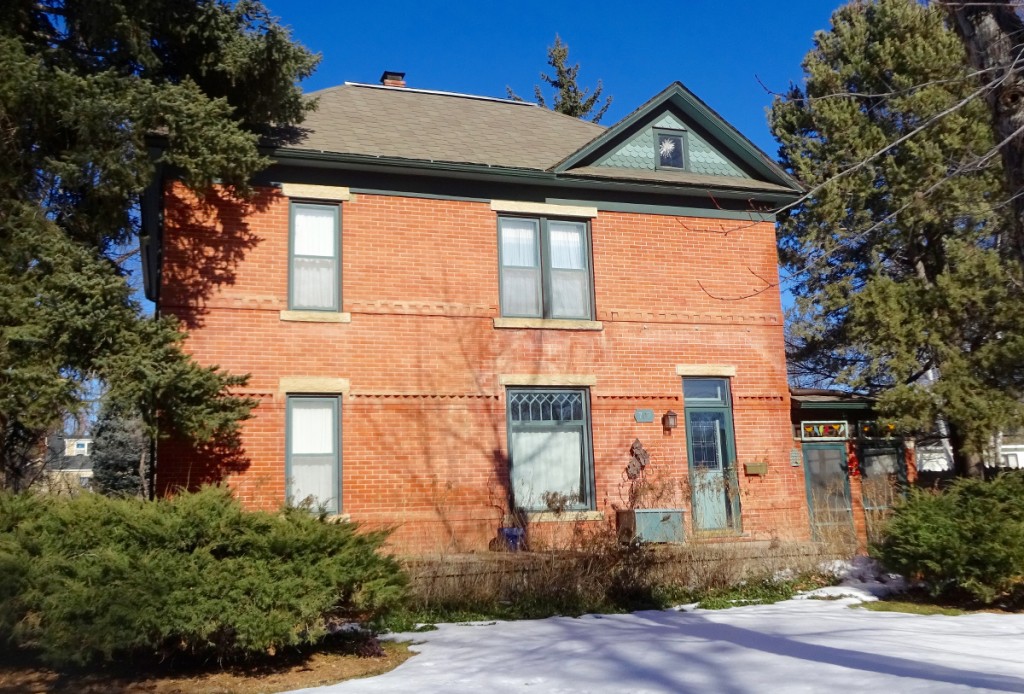 This house was once used as a convalescent home in the 1950s. The side porch was added later, with the original porch being in the front of the house, bracketing the door and the window just to the left. 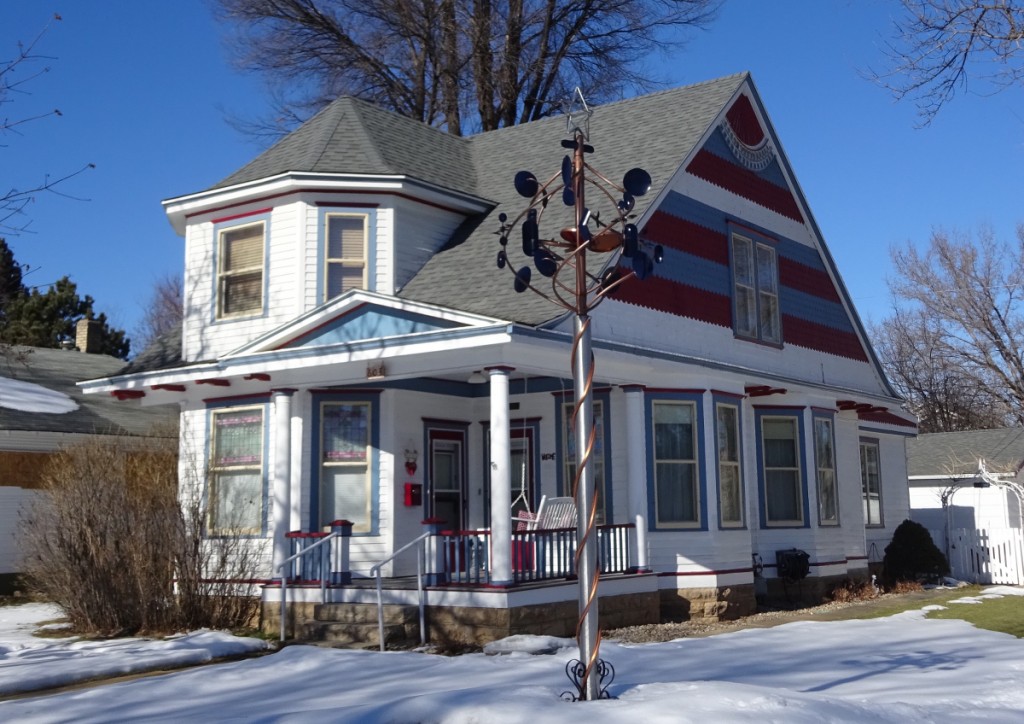 In true Loveland style, this house had a sculpture out front. So I had to be sure to snap a photo that included the artwork front and center.

Norton Fansler constructed this building for a local minister, but later moved into it himself. The minister had a separate front entrance to the parlor for when funerals were conducted in his home.

History Colorado includes a nice description of this house:

Constructed by Loveland contractor and builder Norton C. Fansler in 1905, the house is a good local example of a vernacular variation of a late Queen Anne style residence.  The style was popular in Colorado during the late 19th century and the first few years of the 20th century.  The Fansler House represents the Free-Classic subtype of the style as applied to a moderate sized, 1½-story wood frame dwelling. — HistoryColorado.org 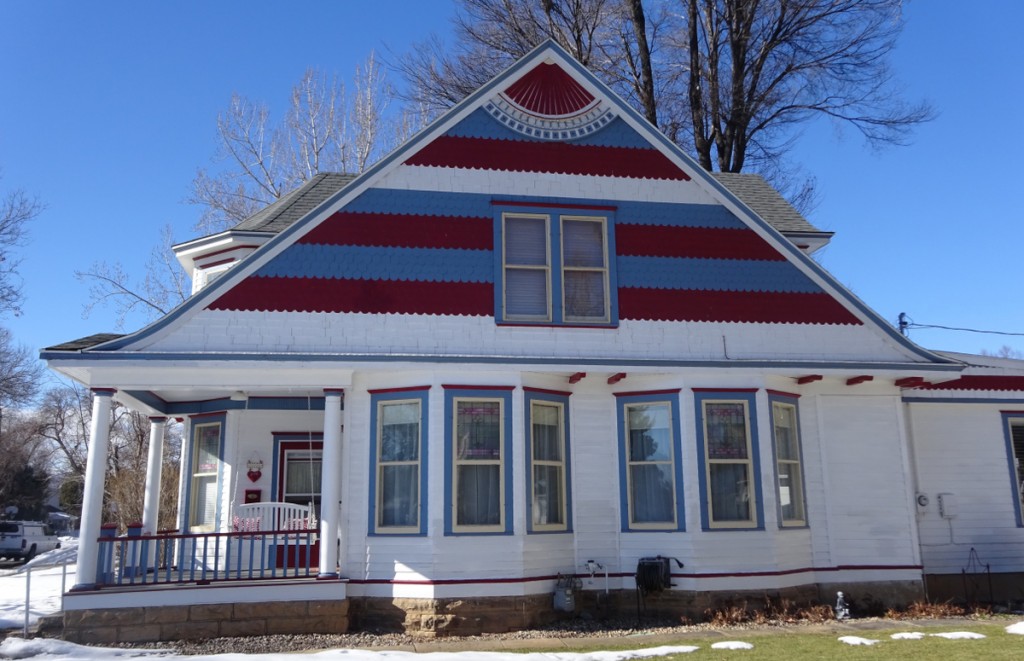 As I was taking the photo of the sculpture in front of the house, I noticed the beautiful design along the side gable of the building. So I swung around to the side to capture the lovely spoke design at the top of the gable. It’s beautifully painted to highlight the detailing. 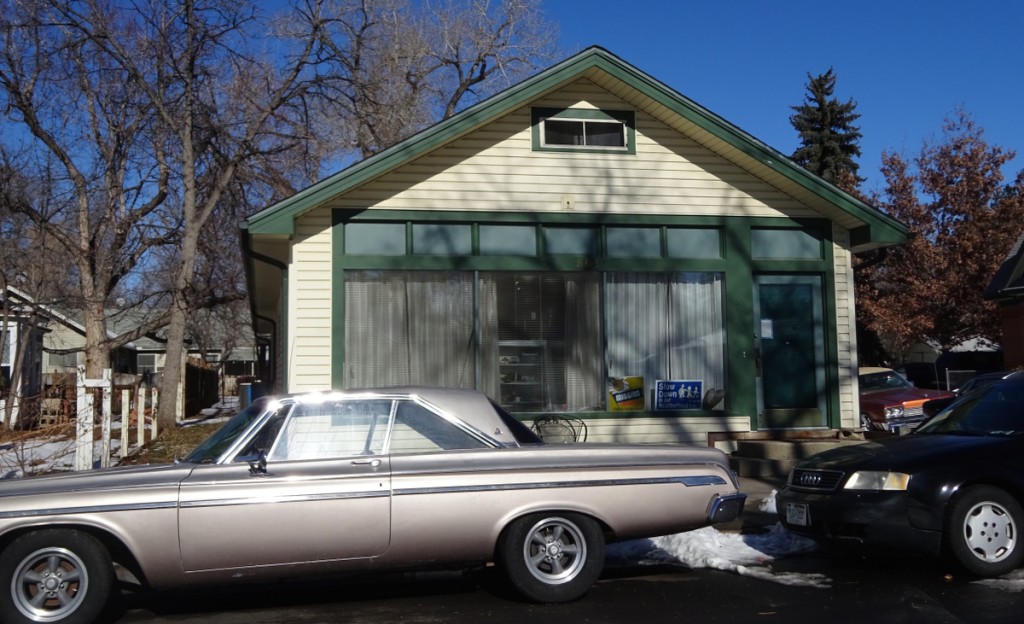 This building sits much closer to the street, which hints at the fact that it was first built as a commercial property. It was used as a grocery store until the mid-1990s when it became a private residence. 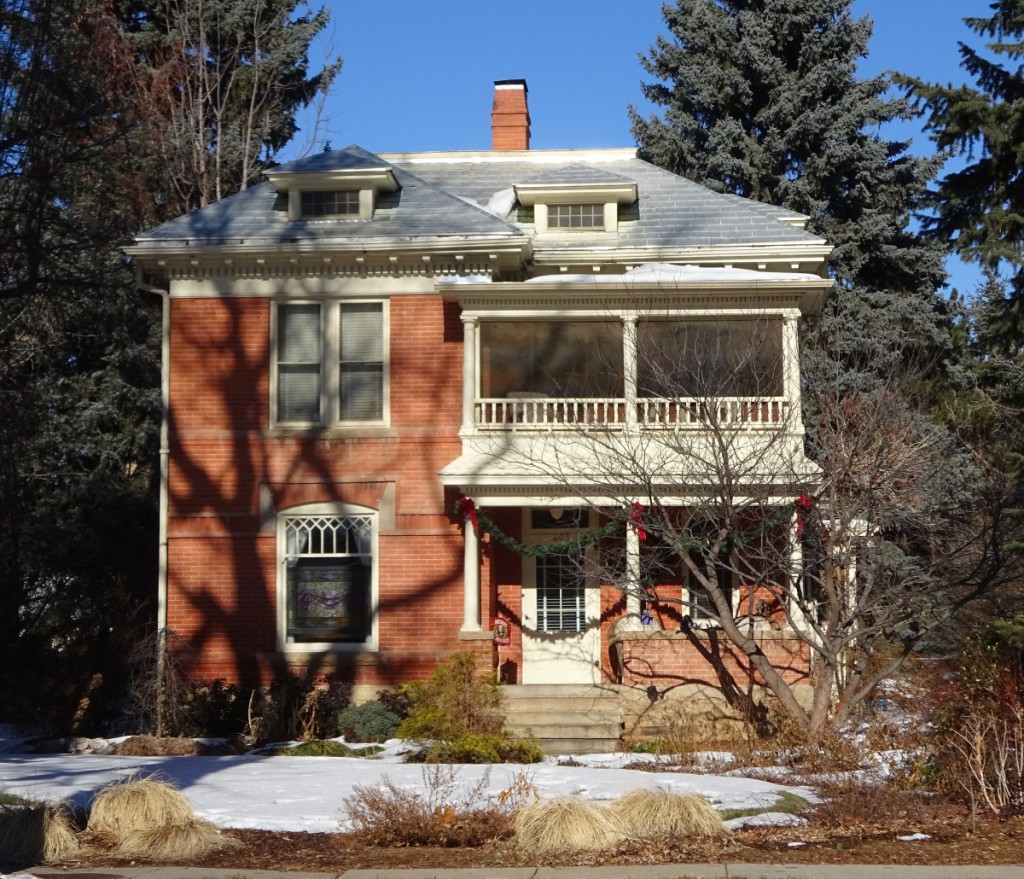 This beautifully detailed house was added to the National Register of Historic Places in 2004. History Colorado gives the following description of the architecture of the house:

The 1897 Benson House is an excellent example of the Edwardian style in Loveland.  Built for prominent local businessman and politician Aaron Shaw Benson, the two-story brick house retains much of its original material.  Details such as dentil molding, Tuscan columns, and segmental arch windows further show the transition from Queen Anne to the classically influenced Edwardian.  An expanded carriage house and shed complete the property. — HistoryColorado.org 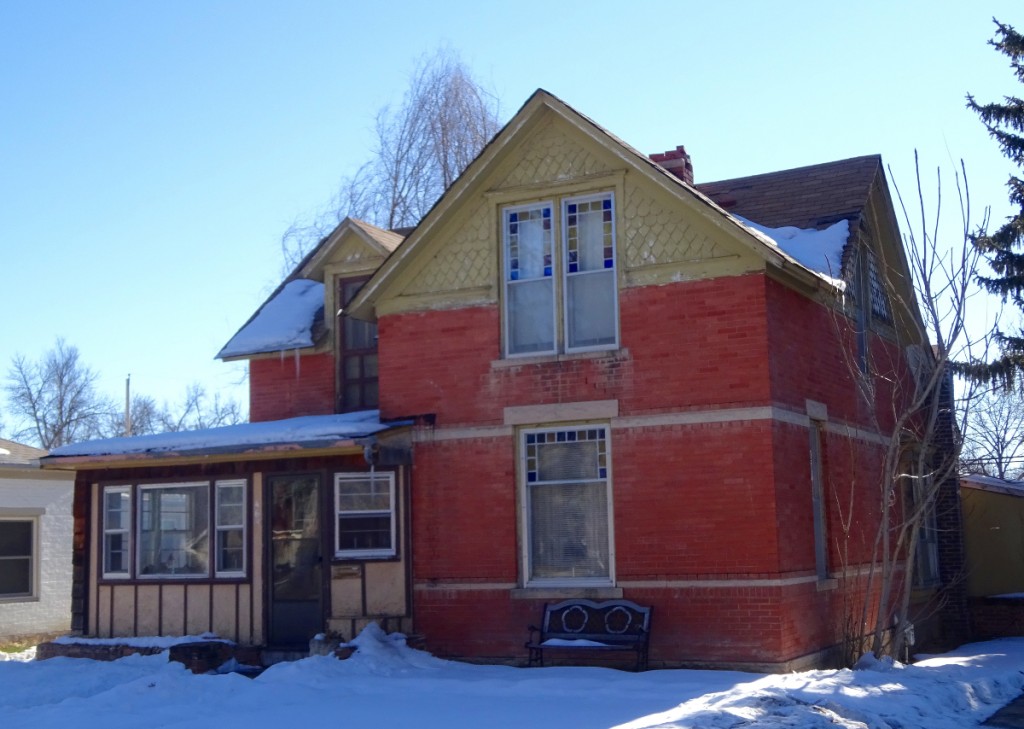 This was the only house on the tour that hasn’t been kept up very well lately. Though its original beauty still shines through, a bit of TLC might go a long way. (I suspect the current owner may be elderly and unable to keep up with maintenance at this point.)

The original owner of the house, Lee J. Kelim, constructed one of Loveland’s earliest power plants. Kelim didn’t live in this house long before selling it to the mayor of Loveland, Harry Kelly. 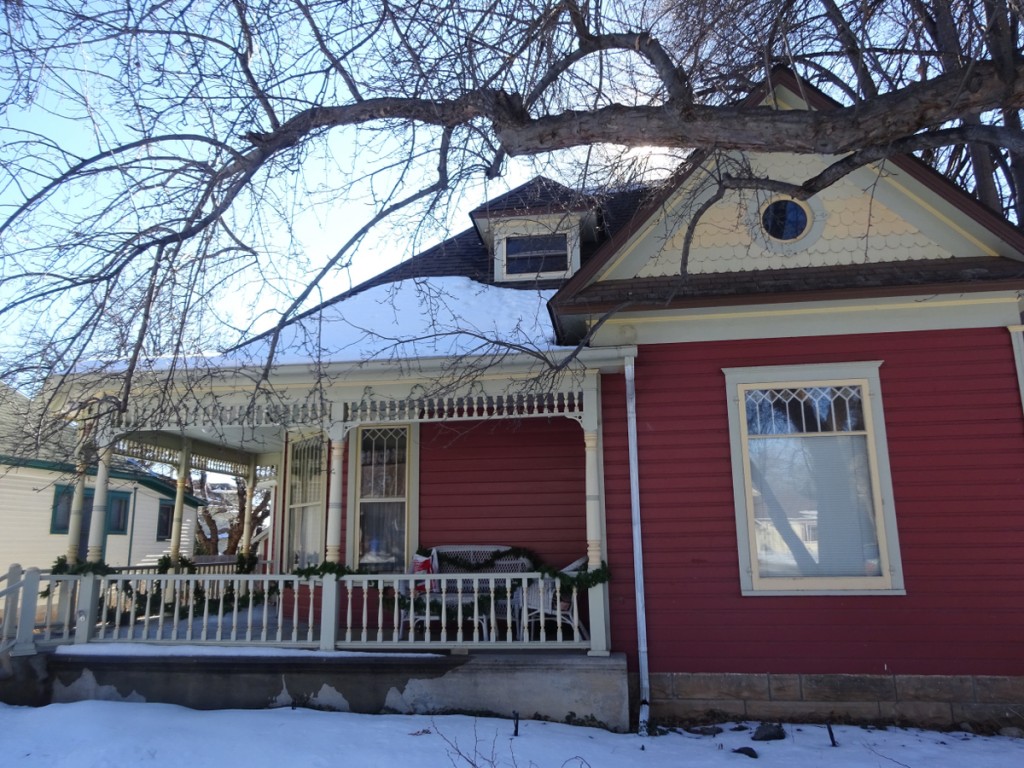 It appears that the name of this house was misspelled in the tour guide. The guide lists it as the Mahaffey House, but the Loveland list of local landmarks says it’s the Mehaffey House.

A park has been named after Winfield Mehaffey. You can read a bit about the history of the park and Mr. Mehaffey’s relationship to that land in this Mehaffey Park History. 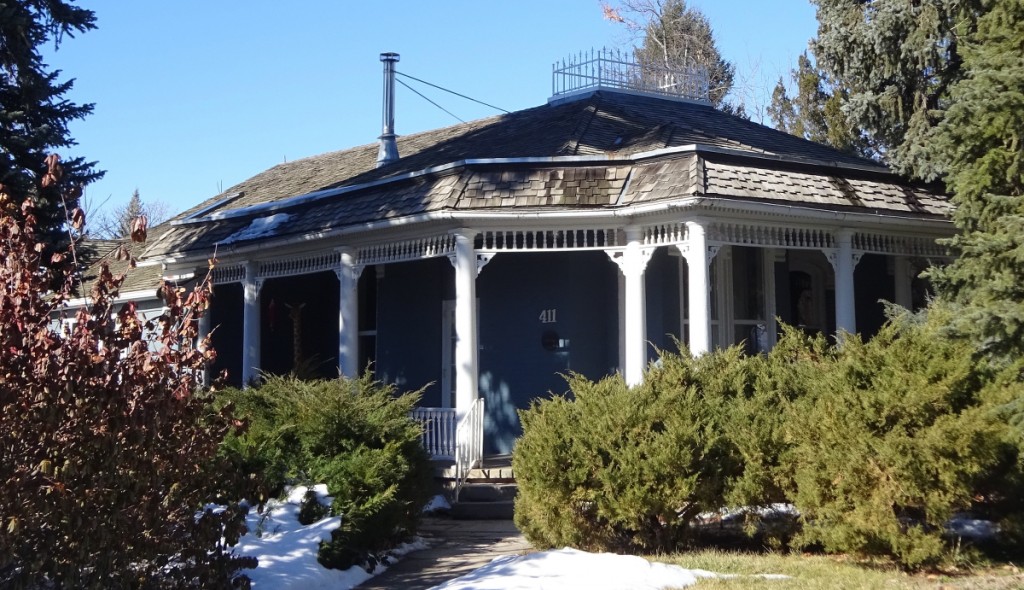 Frank Bartholf built this house as part of a small subdivision. He also financed a fire team and helped to build Loveland’s first opera house. Francis M. and Edith Samuels were the first owners of this house. 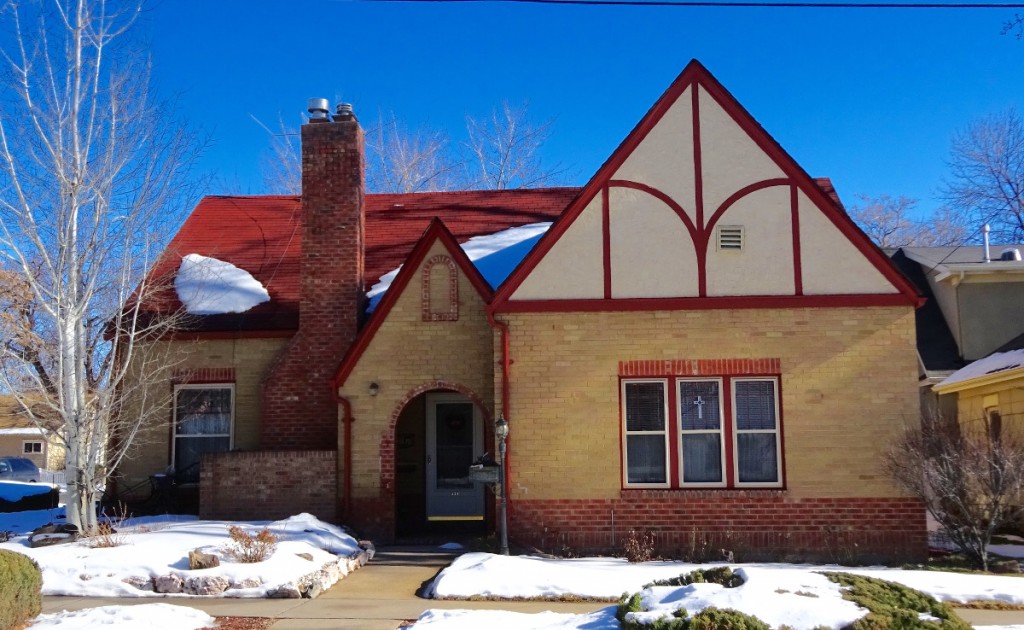 The steep gables, exposed woodwork, archway over the door and prominent front chimney are elements of the English-Norman Cottage style of architecture. 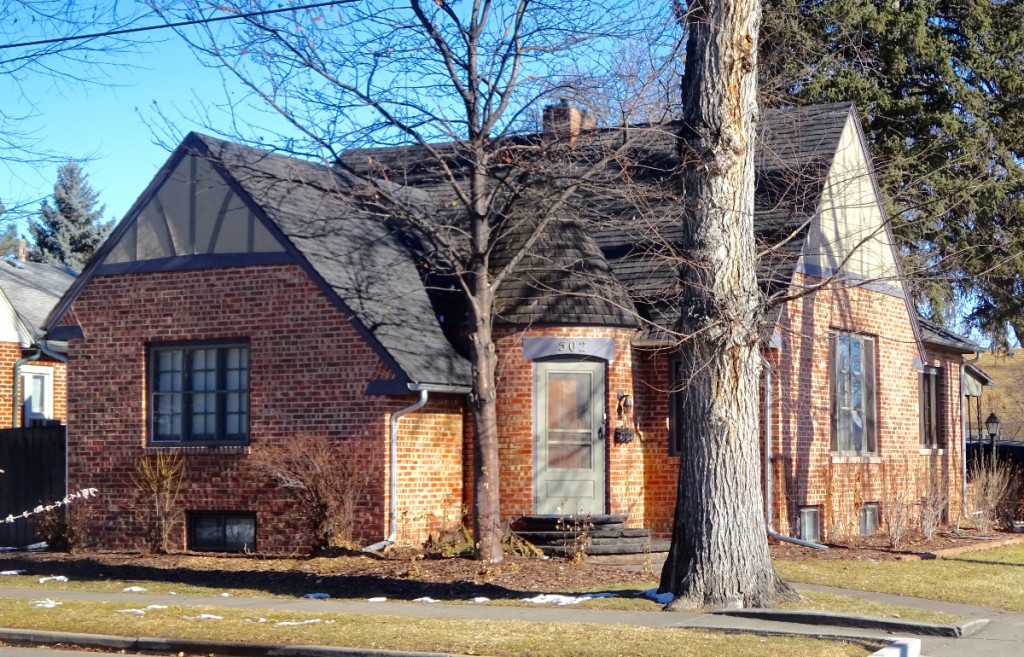 This house also has the steep gables, exposed woodwork, and brick, but it includes a turret-style front entrance. 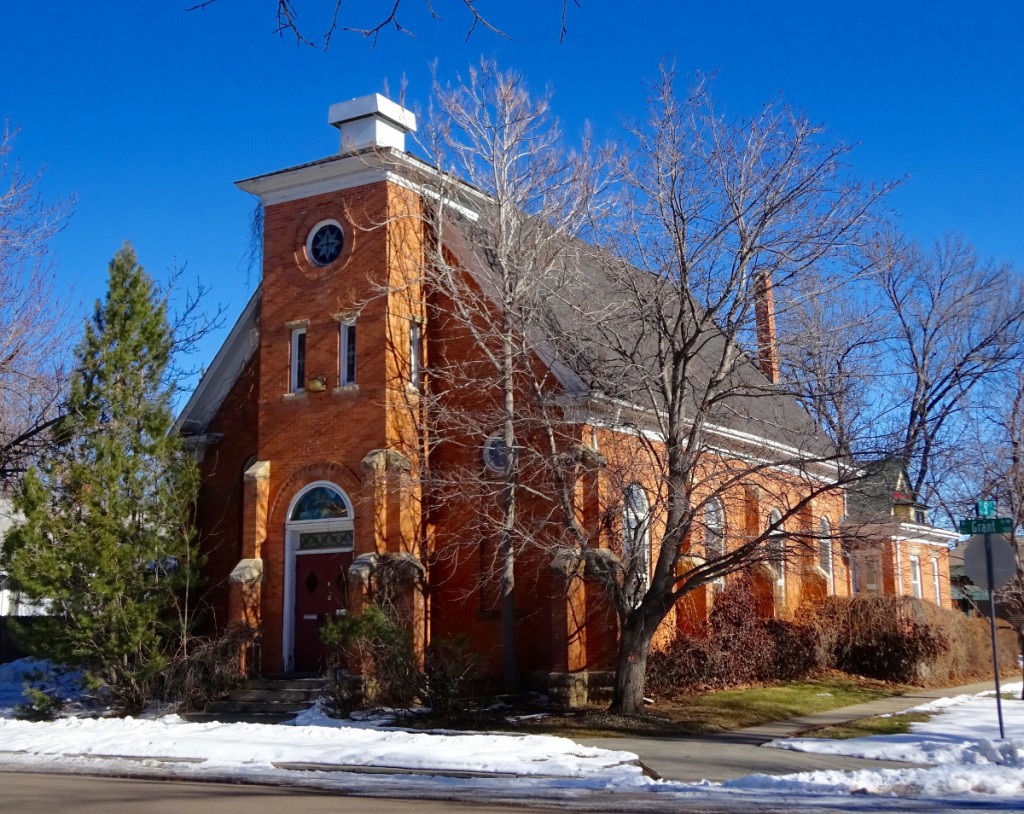 This church is now a private residence. It used to have a bell tower that has since been removed.

And here ends the residential history tour from the Walk Historic Loveland brochure. I want to give Kudos once again to Loveland for putting together such a user-friendly document that’s easy to cart around while checking out these historic places. The only thing I’d wish they’d add is a section of their website that delves in a little deeper than they were able to go on the small page that each property was allotted — with a link given at the end of the tour guide so it’s easy to find.

There were many, many other wonderful houses that I snapped photos of along my way. I’ll be sharing those in an upcoming post.

Tidbits of information were gleaned from the following sources:

Walk Historic Loveland was my greatest resource. You can view an online version at: http://www.cityofloveland.org/modules/showdocument.aspx?documentid=8711

There’s also the list of national landmarks on the National Park Service website. I didn’t end up using this resource, but I thought I’d include it here incase anyone wants to dive deeper.