What Was There – Northern Colorado 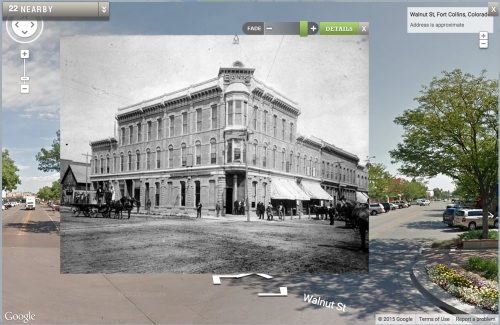 This page from What Was There shows the Linden Hotel in a Then and Now form where you can compare an older picture to a contemporary Google Streetview.

There’s a really nifty little app / website called What Was There that I want to make sure you know about. If you have a smart phone, then it’s a cool way to take a tour around town and see old photos of buildings that you can compare to ones you’re standing right in front of. As the map continues to get filled out, it will also become a really neat way to take a history tour of northern Colorado, starting from wherever you happen to be standing at the time you pull out your phone and open the app. But you don’t have to have a smart phone to use What Was There. There’s also an online website for the less gadget-driven folks among us. Today’s post is going to be a tutorial explaining how to use the site. So if you’re already tech savvy enough to figure it out on your own, I’d encourage you to hop over there right now and check it out. And if you’re not, no worries. I’m going to walk you through it so you can enjoy the cool “Then and Now” action that this site has to offer. 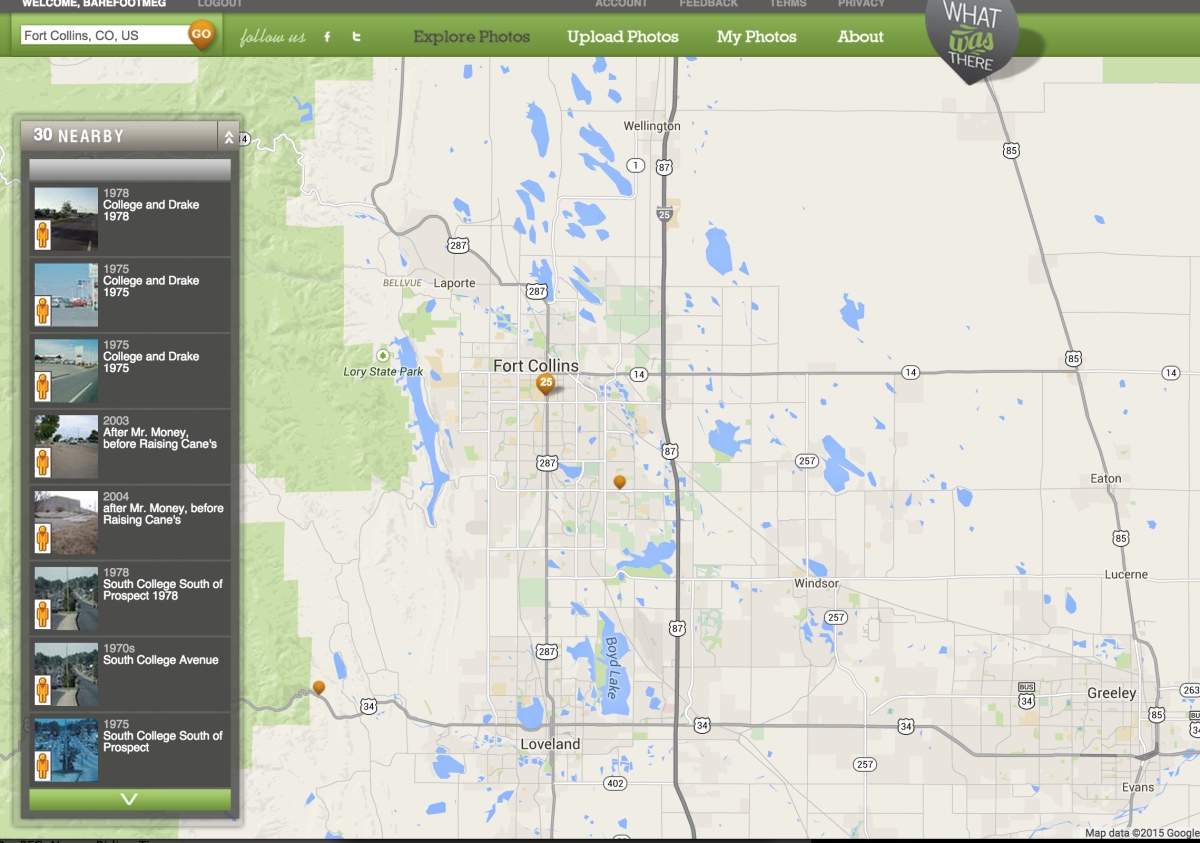 Because What Was There is a crowd-sourced site, it’s up to users to fill in the map with old photos. As you can see, Greeley, Laporte, Loveland, and Wellington are all untouched at this point. (Click to expand size of image.)

The information on this site is crowdsourced. That means anyone can add images and information. If you have old photos, and they’ve been scanned so that they’re in digital form (They’re on your computer.), then you can add them to the site. Fun photos might not just be of campus and downtown buildings, but if you have an old photo of you dressed in your Halloween costume standing in from of your house as a kid, wouldn’t it be fun to overlay that photo on the Google Streetview version of that same house today? It would bring an intimate connection between days past and present.

First I’m going to explain how you can view the images that are already there. Then I’ll run through the process of adding some of your own photos to the site. 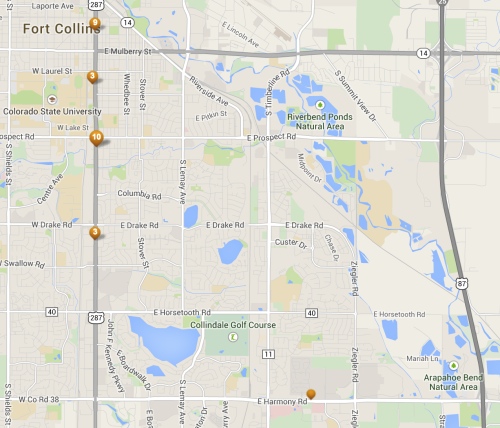 The little orange dots indicate where there are old photos to view. The more you zoom in on the map, the more the dots will spread out to stand in their respective locations. When there are multiple photos for a location, a number will appear inside the orange marker indicating how many photos are there.

First you have to go to the site. It’s located at http://www.whatwasthere.com/. If you’d rather use your smart phone, go to the App Store and search for What Was There. If you’re viewing the site on your computer, you’ll have to search for a location using the search bar to the upper left. Search by city name, not zip code. And don’t include street names. That doesn’t seem to work.

If you’re on your phone, as long as you have location tracking turned on, the app will automatically find your location and point you to nearby images. If you can’t seem to see any, try turning around. I mean that literally. Turn your body. That sometimes brings in to view images that weren’t showing up for you before.

Sidebar on What Was There with thumbnail views of old photos.

Move your mouse to hover over a dot. A popup will appear that tells you how many images are available at that location. There should also be a sidebar on the left side of the map with thumbnails of some of the available old photos. If you hover over a dot and thumbnails from that location are currently visible in the sidebar, they’ll show up as highlighted while you’re hovering. (If that’s a little confusing, go over to What Was There and do some hovering. You’ll see what I mean. It probably makes more sense to do it than to read about it.)

You can either click on the image thumbnail to the left or you can click on the orange marker dot. If there are multiple images at the dot, then clicking will keep zooming you in closer until you’ve clicked on the dot that corresponds to a specific image. Once you’ve selected a specific location, a slightly larger version of the old photo will pop up with two choices: “View Photo Details” or “Google Street View.” 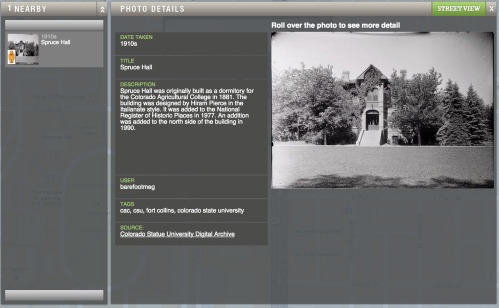 You can find out more about the old photo by clicking on “View Photo Details.”

Under “View Photo Details” there should be information describing the photo, the date, the person who uploaded the photo, and the original source of the image. You’ll note that I’m the user that added the image of Spruce Hall above. (That’s me — barefootmeg.) I took the site from the CSU Digital Archive and provided a link enabling viewers to click through to the original (which can be enlarged). I also tried to add some basic, but helpful information about the building that I gleaned from a couple of other online sources.

Because this is a crowdsourced project, the quantity and quality of information provided is entirely up to the person who adds the photo. I believe there is a way to flag a photo. But I’m not sure if the purpose of that is to notify the site owners to remove offensive material or if it can also be used to alert them about inaccurate information. (I haven’t tried flagging anything yet. If you have a better sense of how the flagging works, please add details in the comments section.) 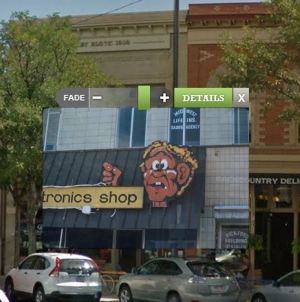 The slider is the best part of the What Was There site/app.

If you select the Google Street View option, then you’ll see the older photo overlaid on top of the Google Street View image of that location. When uploading new photos, the user is given the ability to move both images around until they line up. But I’ve found that even when I line the images up so that they’re spot on, every time I go back later the images have shifted so that they’re no longer the way I had saved them. This bugs me. But I’m hoping that future iterations of this site/app will fix that problem. The old images are still close enough to the proper locations that you can get a good sense of the changes.

And here’s the best part. The site comes with a slider that enables you to gradually fade the old image in and out. (This is where that exact overlap is really cool – and not having that exact overlap is a bit of a bummer.) In the photo above there’s a – and a + next to the word Fade. Just slide that little green bar back and forth to see the old image come and go. The above image shows the difference in facades between what had been used in the 60s to cover up the old buildings and the restored versions today.

That’s it! That’s all there is to it. So head on over to What Was There and have some fun comparing old photos to new.

But if you’d like to add a few photos of your own, read on.

The first step, of course, is to have a digital version of the older photo on your computer. Once you’ve got that, and you’ve made an account for yourself on the site, click on upload photos, then browse for the older image. The photo won’t upload to the site until you’ve added some data. It’s all pretty straight forward to fill out. And you can go back later and edit this information if you want to. So don’t sweat it. But do know that (as far as I can tell) only the uploader of the image can edit these details. So I’d encourage you to be as thorough and accurate as possible.

I found the placement of the image to be the hardest part. First you can enter an address, but as in the case of Spruce Hall, the address was pretty general. Then you’re given the option to either attach the image to Fort Collins in general. (I’m not sure where photos go in that case.) Or you can overlay the old photo on Google Street View. This is tricky because if you drag the old image over the Google Street View and expand the old image to the same approximate size as the Street View image, you’ll no longer be able to manipulate the Street View version. And as I said earlier, even when you get the alignment Just Right, that doesn’t mean that What Was There is going to keep that information. Several times I’ve adjusted Spruce Hall to be right on with the older photo and every single time it seems to jump back to being a few yards away from that. I think we just have to roll with some of these things until the site grows and is updated.

If you upload an image, place it on the map, then change your mind and decide you don’t want it there any more, you can always delete it. So go ahead and give it a go, see what happens, and don’t stress it. Anything you do can be undone.