The Whistling Fish of Nevada… and other news stories from 1883 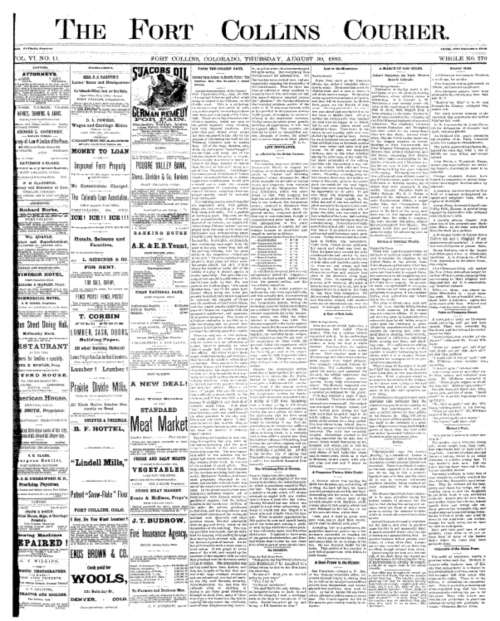 The front page of the Fort Collins Courier on August 30, 1883, contained local ads, but the news was all imported from other states. That is, if you can call a story involving black men at a poker party speaking to each other with a strong southern dialect and using the “N” word “news.” In fact, the most interesting story on the front page had to do with whistling fish. 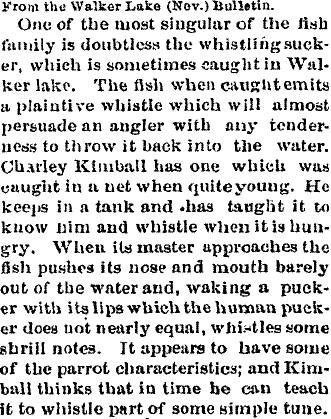 This story was on the front page of the August 30, 1883 Fort Collins Courier.

In other news, the folks of Grand Junction were trying to drive the “Chinese element” out of town, although the article doesn’t explain why. A man by the name of “Buck” Gililand, “made a bad break with a shot gun” and was thrown in jail. The author of the article explains that though he agrees the “Chinamen” should be removed from town, the law is the law and the city marshall had no choice but to arrest “Buck.”

The Colorado Agricultural College was praised by the American Grange Bulletin, in Cincinnati, Ohio, for focusing education upon agriculture and mechanics, as was mandated for land grant universities. They stated that some other states made the agriculture and mechanics part of their programs the “tail end” to some other institution or they focused only upon literary subjects. 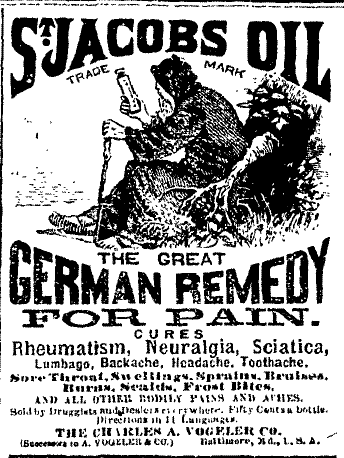 St. Jacobs Oil – for what ails you.

The fifth Annual fair of the Larimer county Agricultural and Mechanical association was to be held October 3rd and things were quickly falling into place for the event. The roads to and from the event were going to be scraped and leveled and bridges were going to be inspected and repaired so that fair goers could “drive as fast as they please in perfect safety” to get to the event.

Watchers of the TV show “Hell on Wheels” will appreciate this one. The Laramie Sentinel was quoted in the Fort Collins paper as being eager to see whether the Burlington & Missouri or the Union Pacific would be the first to get a railroad up from Denver, through Fort Collins, to Laramie. The rumor was that the B & M was about to make another push for the Pacific coast.

Public schools would re-open the first Monday in September. (Labor Day wasn’t celebrated in Colorado until 1887.)

G. W. Emigh sold the south half of his lot on Remington Street, between Myrtle and Laurel, to Professor Elwood Mead, for $270.

A train of four covered wagons passed through town for Washington territory. They were coming from northwestern Kansas.

There was a call to repair the roads into town before the grain market season by editor of the paper who said, “this would be a pious scheme because it would prevent so many from break [sic] all of the X Commandments, and possibly some of their wagons.”

The Fort Collins Courier, 30 August 1883. I accessed this newspaper from the Colorado Historic Newspapers website.

Information on the history of Labor Day come from this government site: http://www.dol.gov/laborday/history.htm