A vibrant, sustainable economy is the ideal of any community. On February 4th, at the Saving Places conference in Denver, Kimber Lanning made the case that the key to a robust local economy is in having healthy locally owned businesses. She took a lot of ideas that have been floating around in my head for years and pulled them all together into a cohesive picture that really blew me away. (Both historic preservation and equitable transportation, two topics I blog a fair bit about, are part of the overall picture that she painted, piquing my interest even more.) My goal this week is to share the substance of her argument with you, albeit in my own words (and with some of my own ideas thrown in to boot).

A healthy economy is one that supports the local population by providing goods, services, education and jobs. A weakness in any of these areas points either to a current problem or a looming one — leading to a lack of growth, imbalanced growth, or even negative growth. (An example of negative growth that’s unfortunately common in the Plains States is found in declining farming communities where the younger generation grow up and move away.)

If residents don’t have access to the goods and services that they need, they’ll move to where they can get them. (Lack of affordable housing comes to mind.) To the extent that educational opportunities are either not present or not available to all, the preparedness and skill of the incoming labor force is stunted. And if jobs are not available, or there is not a wide range of jobs to suit all types of workers, then a community is likely to lose talent, expertise, and diversity.

In an ideal economy, educational opportunities would be accessible. This could range from robust local libraries and equitable public school education to a wide variety of post-secondary options and retraining programs. Job options should be diverse and should span the six career paths outlined in the Colorado Career Cluster Model. And all residents should have access to basic goods and services — healthy food options, clean water, reliable transportation, affordable housing, etc.

Of course, no economy reaches the ideal. Some fail altogether. (When I lived in Detroit, most shopping trips required leaving the city because many items weren’t available where I lived.) Others seem instead to wobble — one aspect of the economy might be going gangbusters, while another part is really struggling. So you end up with some residents doing really, really well while others struggle and may end up moving away… or remaining in place but growing increasingly impoverished. The greater the wobble in the economy, the greater the divide between the lower socio-economic classes and the well-to-do.

And all of this can be undermined by an imbalance in flow between the local and national (and international) economy. To the extent that we, as a community, send the bulk of our money out of the community, we our forfeiting our control over our local economy.

Lee’s Cyclery, a cornerstone in the Fort Collins bicycling community since 1963.

Building a sustainable, resilient community is up to us.

Maintaining a strong local economy over the long haul requires local control. The more we hand the reins over to national or international organizations, the less say we have in how our economy builds upon upturns or how it is undergirded during downturns. And once we’ve ceded control, our destiny can literally be up to the big corporations or the state or Federal government. (And we see how well that worked out for Flint, Michigan.)

How is it that local municipalities are giving away their control? And why in the world would they do that? As with many things, it happens slowly, incrementally, and with the best of intentions.

Bringing in big box retail is a favorite way for a city to bring in jobs and increase sales tax revenues. And in order to secure the big box store, a municipality will often offer massive tax breaks, fee waivers, or other financial incentives — incentives that the smaller local businesses rarely (if ever) receive. But any sales tax gains are tempered (or negated) by the incentives that the city has given away. And any increase in jobs is likewise negated by the loss of jobs not only in parallel retail businesses, but in secondary businesses as well. This was one of the A Ha! revelations I had when listening to Kimber at the conference earlier this month. I’d never thought about the secondary businesses before.

Suppose Walmart moving in instigates the closing of several local retail businesses. We might look at the number of new Walmart hires compared to the number of jobs lost when the local businesses went under. But there’s a whole ‘nother level of jobs lost that we might not think to look at. When the local company wanted to run an ad, or they wanted to rebrand themselves, or they needed legal assistance or accounting work done, they’d most likely turn to another local business for those services. But Walmart already has its own legal department, accounting department, marketing and advertising… and none of those departments are located here in Fort Collins. So while the local businesses were in turn supporting other local businesses, thereby helping to maintain those jobs in the secondary businesses, Walmart sends that work out of the community, creating an overall net loss in jobs for the city when all is said and done.

Does this mean we should pull out our pitchforks the next time a big box store makes overtures about moving to town? I don’t think so. But I do think that we need to be wise about how we grow. In Cape Cod they’ve adopted a model that includes economic impact criteria in their planning policy. A regional planning commission takes proposals from prospective big box companies and evaluates them not only in terms of the usual zoning criteria, but it also looks at the environmental and economic impacts the new store would have. When Lowe’s approached them, they did the math and found that not only would Lowe’s have a negative impact upon the many building supply stores already in the area, but it would also pay each employee less in wages and benefits than the current building supply stores were paying. Which meant that allowing the Lowe’s to move in would likely lead to an overall net loss in jobs as well as reduced wages for the jobs that remained — leading to an overall negative economic impact for the community. The commission concluded that “the probable benefit of the proposed development is not greater than the probable detriment” and they denied the application. (For more on the Cape Cod scenario, see this article by the Institute for Local Self-Reliance “Two Big-Box Decisions Show How Smart Planning Policies Protect Good Jobs.”) 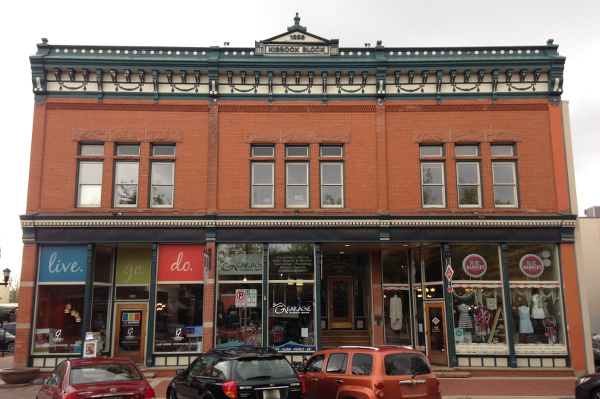 There are some advantages to having big box stores in town. Nothing is ever entirely black and white. When Whole Foods moved to town, it put my favorite local bakery, Maggie McCullough’s, out of business. But I believe it also raised the bar in terms of what our local grocery store options look like today. We had already lost the locally owned Steele’s Markets by the time Whole Foods came. And Wild Oats was lost more because the company got bought out by Whole Foods than because Whole Foods was competing just down the street. Since Whole Foods has arrived we’ve gained Sprouts and Trader Joe’s, and Natural Grocers by Vitamin Cottage has had a makeover. (The Food Co-op is still struggling with its own attempts at transformation.) Whole Foods coming to town upped the ante on what our local food options look like. Though it moves money out of our community, and has brought in other stores that do so as well, it has also changed the way many residents think about sourcing their food, which has in turn lead to growth in local farmers markets and other Community Supported Agriculture options.

So I’m not saying that all big box stores are bad. I’ll admit that I shop at Target and Natural Grocers. But we need to recognize that every time we choose to shop at one, we’re not shopping at a locally owned store. So we may save money, and we may be able to buy things we couldn’t get otherwise, but we also need to be aware that most of the money we spend in those places is going to be wired right out of our town and into another community. As long as we’re creating valuable products and services here that people from other communities are buying, then we can balance this out. But, like the communities in the Cape Cod area, we need to aim at having an overall balance between the money that we’re sending out of town and the money coming in.

And more than that, we need to be aware that every time we bring a big box store into our community, we’re putting a little bit of control over our local economy into the hands of someone that lives somewhere else. When a developer, or owner, or business comes in from Greenwood Village, or Chicago, or Bentonville, then decisions that affect Fort Collins are being made by people who might know almost nothing about what we value as a community. If Walmart wants to blanket our city with stores, then, once it’s pushed out most of its competition, proceed to shut down one of its stores, leaving a huge vacant building in the center of our town, that’s their right. (And that’s exactly what they did for awhile… until Target added a second store and gave them a bit more competition. Then suddenly that shuttered store was reopened. Walmart giveth and Walmart taketh away… until it suits it to giveth again.) 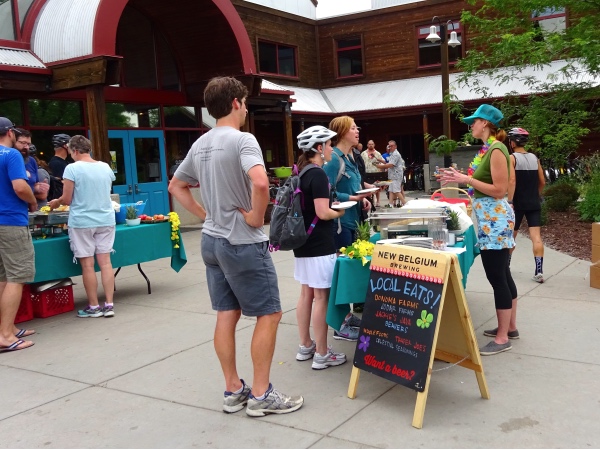 When New Belgium hosted a Bike-to-Work day station in June, they invited local food producers to come and show off their products. This provided an opportunity for small businesses to do some direct marketing with future customers that might not have even heard of them before.

It’s important to look at the big picture.

There’s more to this story than just big box vs. locally owned stores. What Kimber Lanning pointed out in her talk a few weeks back was that there’s a story here that we tend to look at in little chunks. But when we start to put all the pieces together and see the issue more holistically, we begin to realize just how much of our community we give away by sending our money elsewhere. It changes how we build, how we travel, where we shop, and how equitable our community is for those who live here.

This is the first of a five part series.