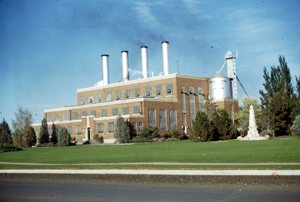 The Municipal Power Plant of Fort Collins. Built in 1935-36. The water fountain can be seen to the right. (Photo taken in 1957. From the FCMoD Archive online collection.)

In 1887, the Fort Collins Light and Power Company was created in order to provide the new fangled power of electricity to the city of Fort Collins. In 1908, a Lafayette based company, Northern Colorado Power, bought up the Fort Collins company and shut down the electrical plant that was located at Mason Street and Mountain Avenue. For almost three decades, power was brought up from Lafayette, Colorado. But in the early 1930s, facing debt and needing another source of income, the city commissioners decided to build a new power plant. They chose a location on the north end of town that was being used as the city dump at the time. The Power Plant was a grand building in the Art Deco style that greeted visitors as they approached the city from the north.

In the 1920s, as terra cotta moldings on buildings became popular, the Northwestern Terra Cotta Company of Chicago expanded by opening plants in St. Louis and Denver.  When the Depression hit, the Works Progress Administration (WPA) funded projects at the plant, including an Art Deco terra cotta fountain made in 1934*, complete with an obelisk, four spouting fish heads, and four gryphons, which was intended to be installed in Denver’s City Park. The Denver Art Board rejected the fountain, however, and it most likely sat in a warehouse until, in 1936*, the City of Fort Collins selected it for our own City Park. It’s possible that someone thought the fountain might look good near the cannon that had been installed only 5 years previous as a memorial to honor the veterans of the Great War. (The miniature replica of the Statue of Liberty wasn’t added until the 1950s.  *The dates that are given here are from the Smithsonian Art Inventories Catalog. Other sources I’ve seen state that the fountain was created in 1936 and installed in 1937.)

The management of the city’s power plant stepped in, however, and negotiated to have the fountain installed by the Power Plant instead.

The terra cotta plant closed in 1965, and it is unknown if there are any other fountains in Colorado that were made from the same molds as the ones that were used to make our fountain here in Fort Collins. (If you know of a similar fountain elsewhere, please let me know!) 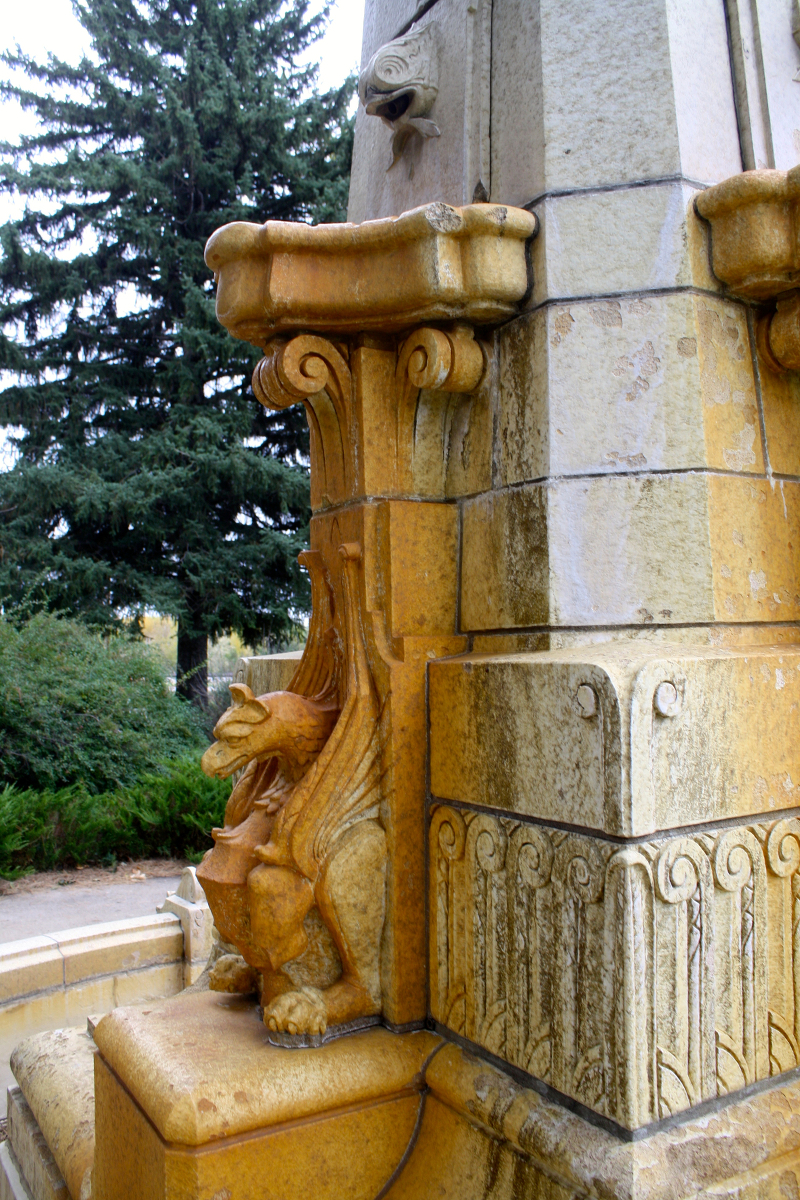 The fountain was in a great state of disrepair up until recently. Chunks of glazing had come off, the gryphons had been stained red from the water running down over them, and all four gryphons had lost their front legs.

The fountain came to the city in large sections which needed to be put together. You can get a sense of this from the photo above. Large slabs were cemented together to form the whole. Roy W. Nye, in his obituary in the Coloradoan on April 18, 1957, was listed as having worked on “… the fountain on the grounds of the city light plant.” Very little besides that is known about the fountain’s installation. 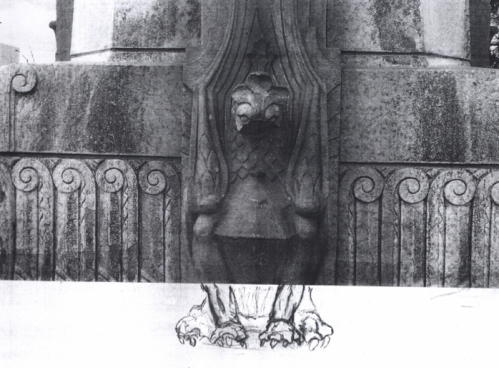 The Old Power Plant has been leased long-term to Colorado State University. In 1992, the  Engines and Energy Conversion Laboratory (EECL) was housed in the previously vacant building. But in the spring of 2014, a 65,000 square foot addition was completed and the complex is now called the CSU Powerhouse Energy Campus. In conjunction with the renovations and new building that has taken place on the campus, the fountain was also given a facelift. 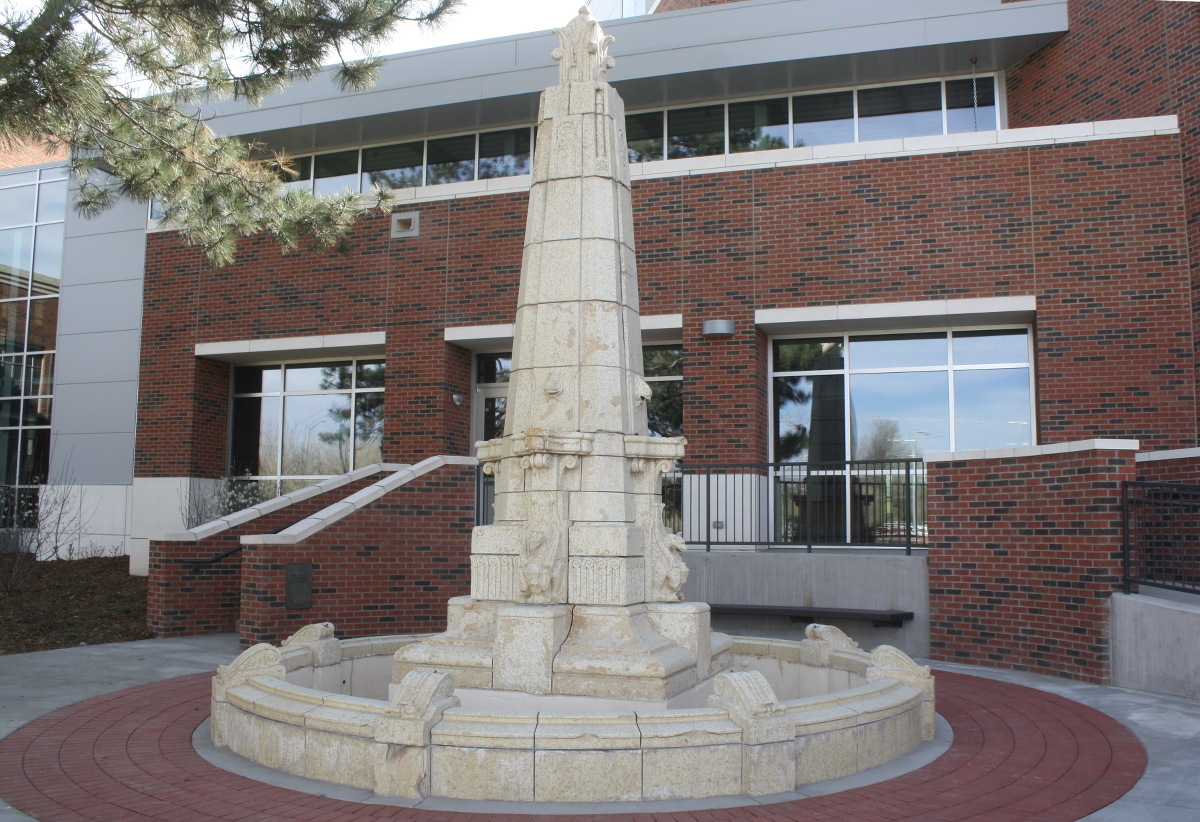 Previously surrounded by grass, the fountain (which wasn’t moved) is now a prominent and beautiful feature adorning a front entranceway to the new building. Note that the rust coloring is also gone.

If you look closely in the photo above, you’ll see a plaque on the wall to the left behind the fountain. It was moved from its previous location on the ground and installed where it will hopefully be more noticeable. 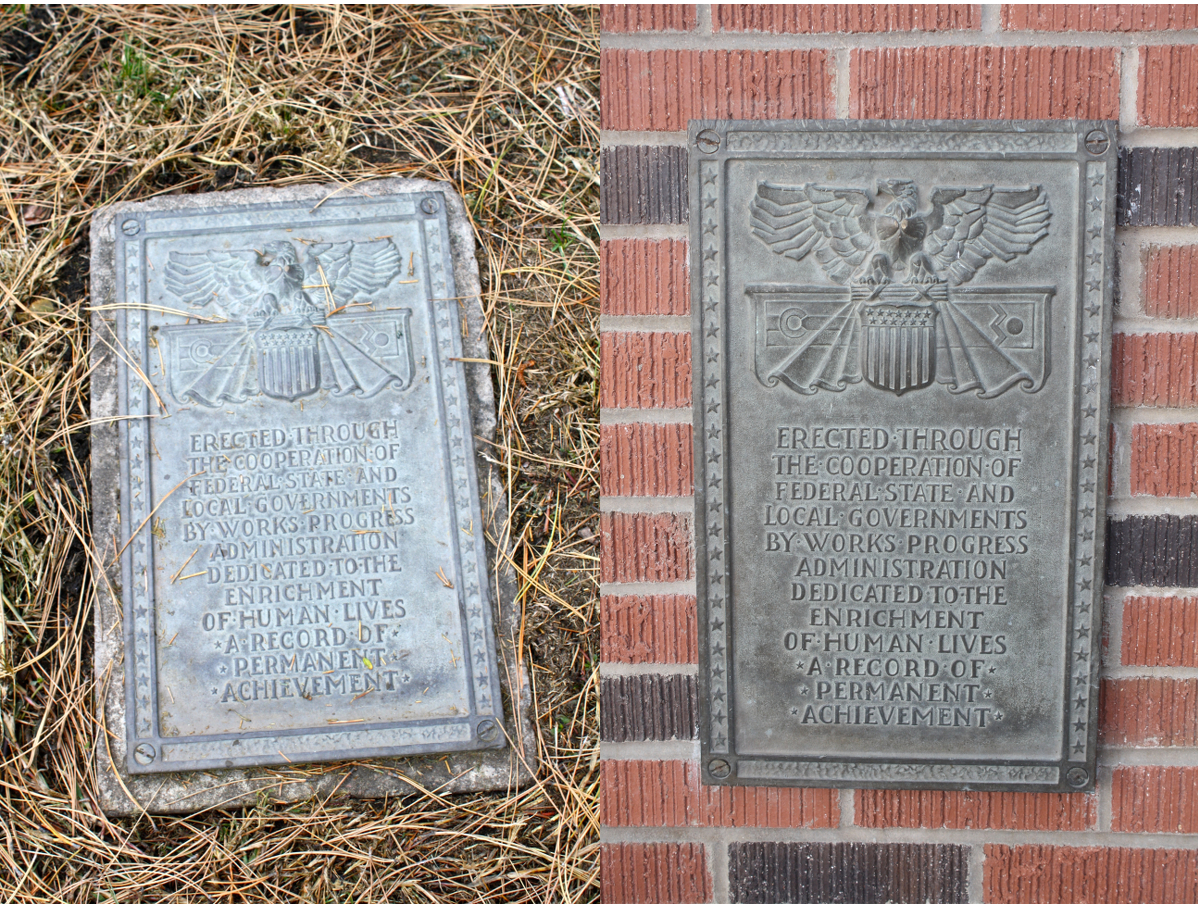 The plaque that previously had been placed in the ground is now located on a wall behind the fountain.

Building Restoration Specialties, Inc., a Denver based company, was brought in to repair and restore the fountain to it’s original beauty. 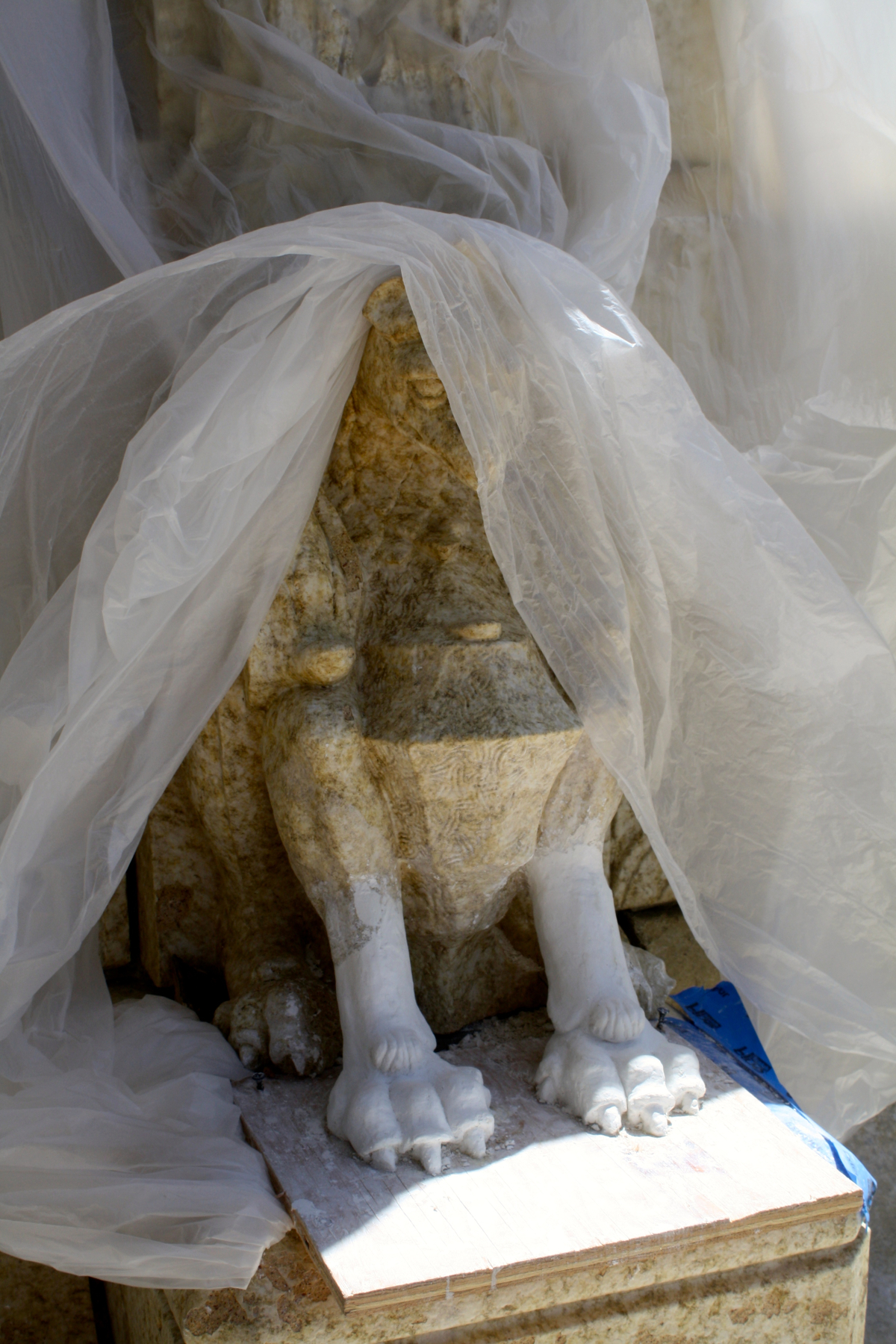 Plaster molds were kept under wraps to protect from rain.

New forelegs had to be created for each of the gryphons. When the work was begun, it was unknown what the original legs had looked like. But after a set of legs had been fashioned, a newspaper article from the November 21, 1984 Triangle Review was discovered which showed a photo of an intact gryphon. The article by John Pfeiffenberger consisted only of a large photo with the subtitle, “Stoned turkey?” and some text which announced that plans were in the works to turn the abandoned power plant into an “exciting place to create and view the visual arts.” (There was apparently more information on the project on another page.) 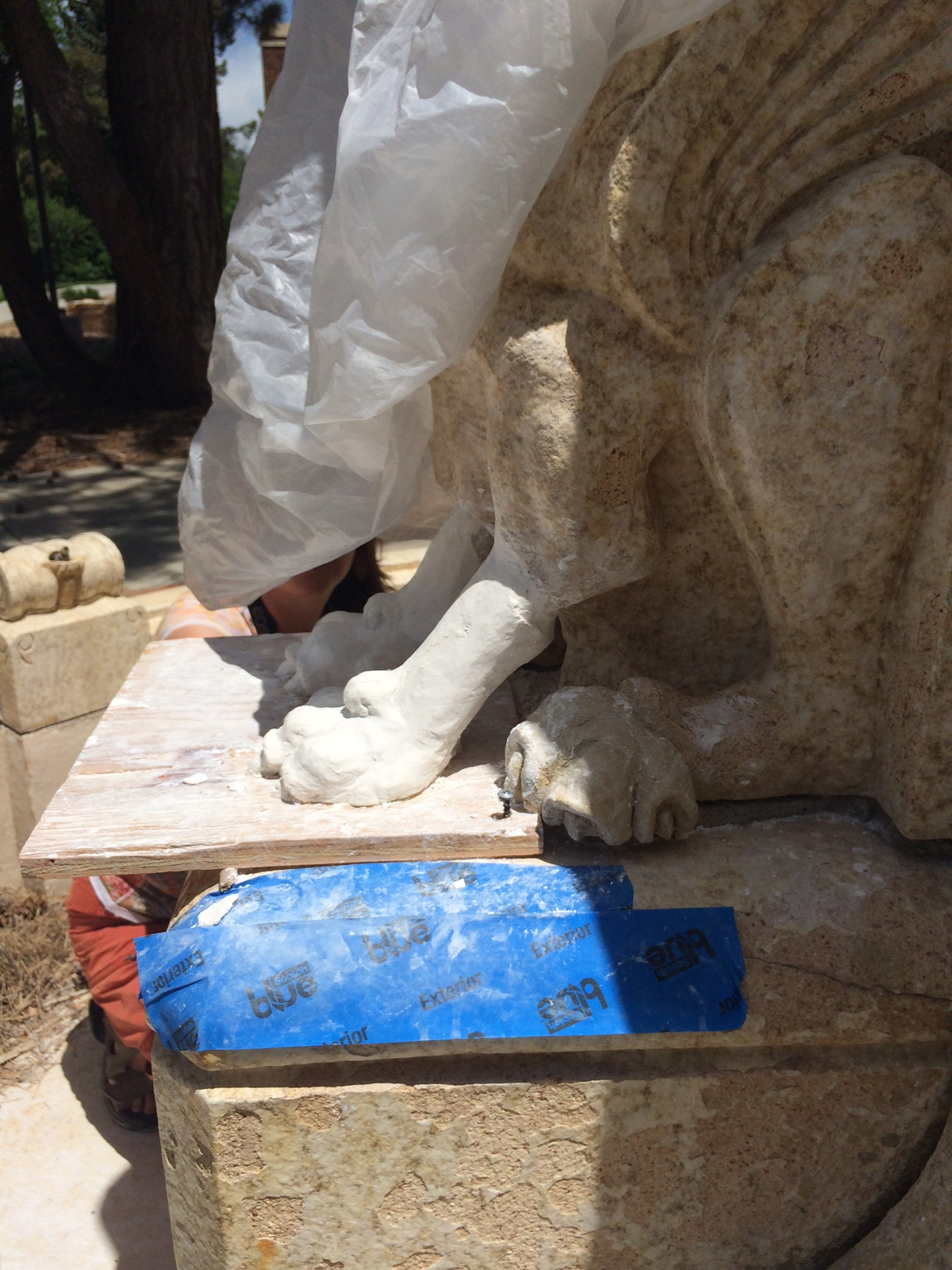 The work on the fountain was inspected by a couple of Landmark Preservation Commission members and one of the city’s historic preservation planners. That’s yours truly crouching down on the other side of the gryphon to get a better view of the new legs. (Photo courtesy of Karen McWilliams.)

The Landmark Preservation Commission and the city’s historic preservation planners looked over the work and gave feedback along the way. The legs shown above were determined to be longer than the originals so they were made a bit stumpier and furrier before they were finalized. 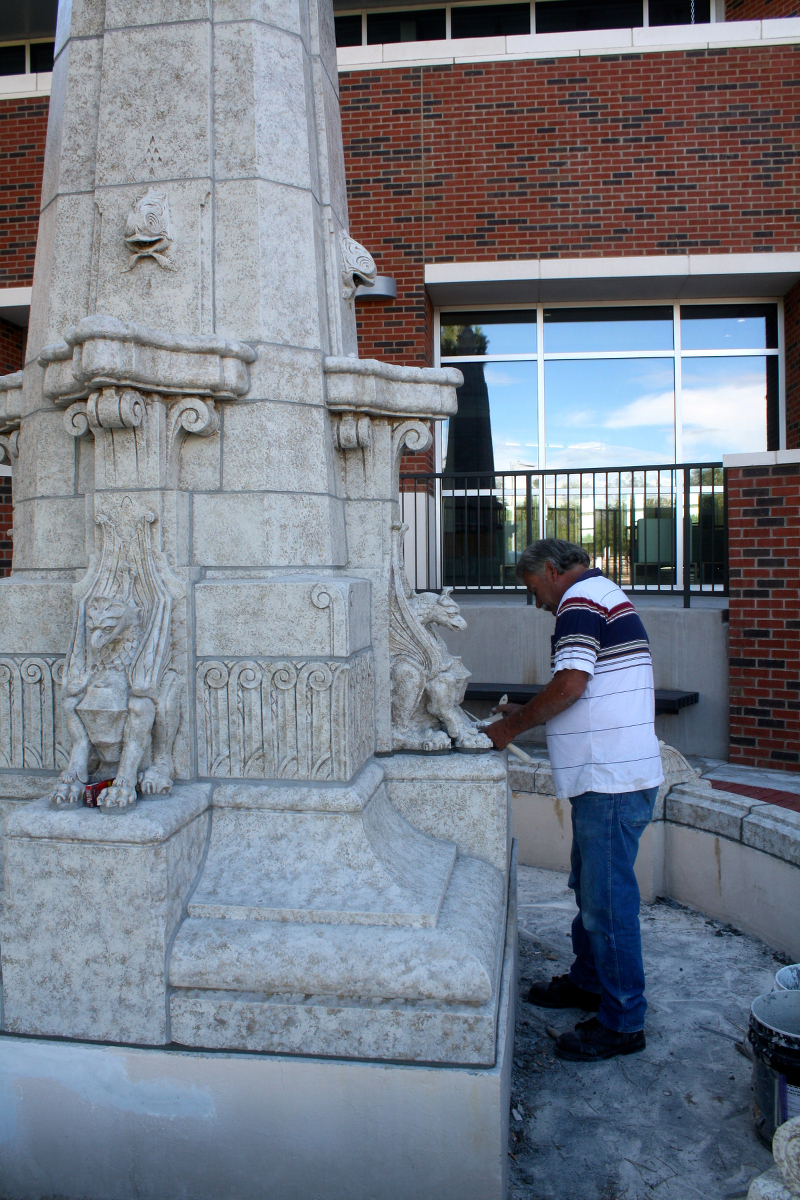 Bryan Riggs was repointing the mortar between the sections of the fountain in this photo. Bryan made the molds for the project. Jared Wolfe made the original plaster legs which Brian used to make the molds.

Because there were large sections where the glazing had fallen off, the entire fountain was re-“glazed.” To truly have been reglazed, the pieces would have had to have been taken apart, coated with glazing, and then fired, which was how the glazing was originally added by the Northwestern Terra Cotta Company. But now that the fountain has already been installed, it’s not possibly to truly reglaze it. So instead a coating was applied that looks similar to the original glazing, but it’s a modern product that doesn’t requiring firing. 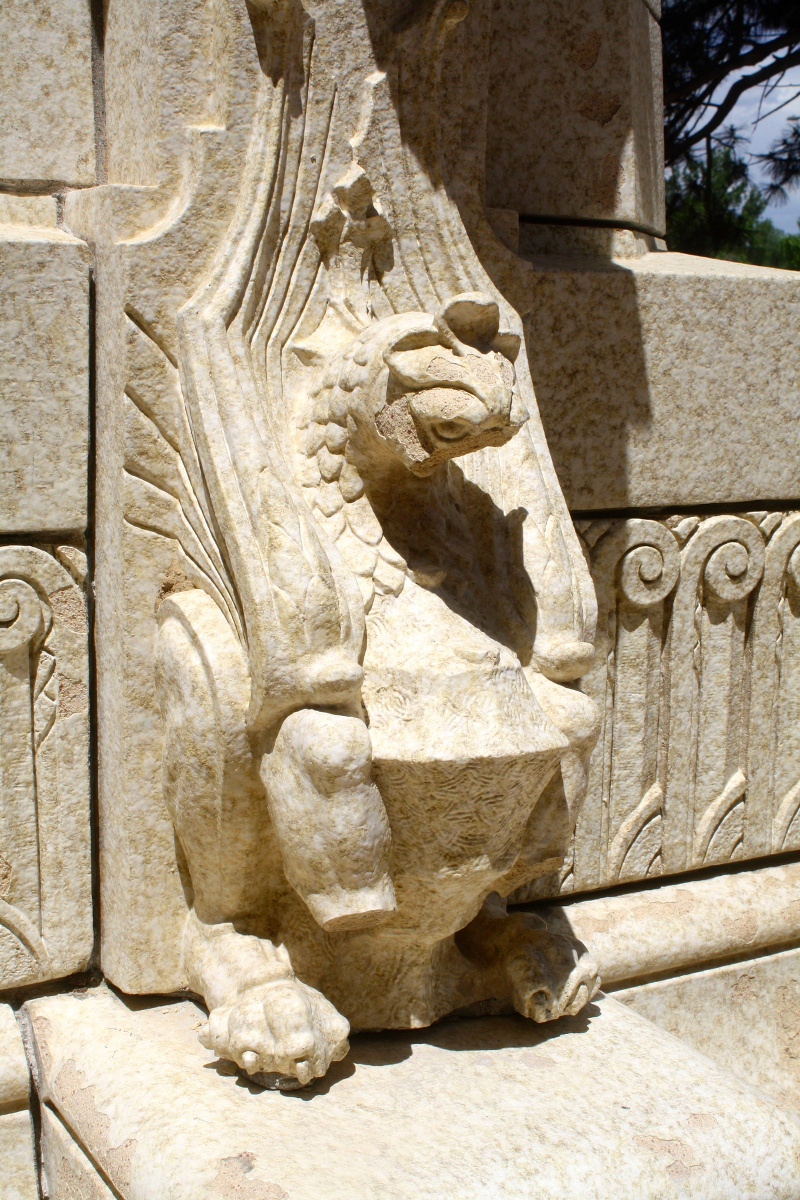 This poor fella was missing his beak.

One of the gryphons was missing not only his front legs, but his beak as well. Because the other three gryphons still had their beaks intact, there was no guesswork involved in figuring out how to make a new beak for the little guy. Bryan Riggs covered one of the intact gryphon heads with a special rubbery substance which he could then peel off to create first a plaster version and then a proper mold for the final product. 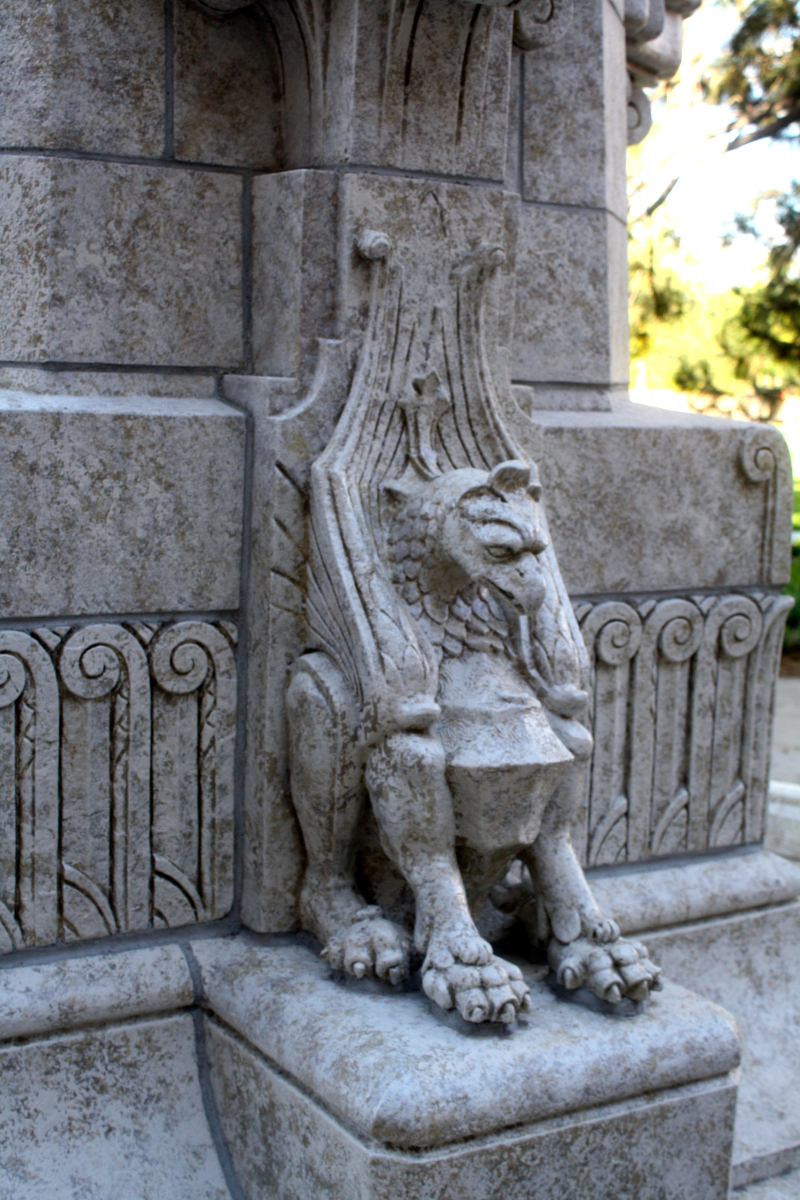 You never know how great it feels to have a beak until you’ve been without one for a couple of decades.

I’ve come across a few different documents that refer to the gryphons as gargoyles. But gargoyles are grotesque figures that are usually used as drain spouts from the tops of buildings. A gryphon, on the other hand, is a creature with the head and wings of an eagle and the body of a lion, a description that suits these little guys pretty well.

Cat, of the now mothballed site, Lost Fort Collins, said that the fountain is “the most bitchen piece of  art we own.” In the intro to her post on the fountain, she summarized its sad state, “Rejected by Denver, ‘negotiated’ away from City Park, and all but absent from the internet. Our bitchen 1936 WPA fountain deserves better.”

I think that day has finally come. All four gryphons are restored, the rust has been removed, and the entire fountain has been reglazed. The restoration company did a fantastic job on our last remaining historic fountain.

Barbara Fleming’s article from February 23, 2014 entitled A Walk Through History: Electricity fires up Fort Collins, published in the Coloradoan – from which I got details about the history of the power company.

Information on the Northwestern Terra Cotta Company came from the Chicago History encyclopedia.

The information about Roy Nye came from a document entitled, “The Municipal Power Plant of Fort Collins, Colorado: A Brief History” which I received from Karen McWilliams, Historic Preservation Planner with the city.

To find out more about the addition to the Old Power Plant, check out this page on CSU’s website. (You’ll note that the year is wrong. Unless CSU has developed time traveling technology, I believe the article was published on April 16, 2014 and not April 16, 2015 as the article states.)

To see Cat’s article on the fountain, check out her post on Lost Fort Collins.