The Ever Evolving Nature of College Avenue — Change Happens

College Avenue is ever changing, ever growing, ever reinventing itself. This is a natural part of life. Sometimes the change is slow and gradual. But other times the city grows so quickly that several development projects take place at once, substantially changing the look and feel of an area. Part of the role of the historian is to track these changes, noting what was there before, and acknowledging the new that is coming in.

From the point of view of the historian, development plays two roles. It alters or removes artifacts from the public realm. (Even if a building isn’t open to the public, there’s still the interaction residents have with it as they pass by it — the feelings it evokes, whether positive or negative, the familiarity of it, and perhaps also the use of it.) And development creates new artifacts that will become a part of tomorrow’s history.

Yesterday, I walked the dogs over to the corner of College and Locust where the gas station on the northeast corner is in the process of being demolished. A Forgotten Fort Collins reader had alerted me to the fact that bits of the facade of the gas station that used to stand on that corner are now visible behind the removed walls of the current gas station. So I took some photos, then walked north on College to head home. As I walked, I passed block after block where I saw a building that will soon be torn down, or an empty lot where a building has just recently come down. It struck me that almost every block between Prospect and Olive is going to have new development on it within the next year or so. That realization stunned me. It’s one of those moments when a historian realizes, “I’m in the middle of it. This is history in the making. I need to pay attention to this.”

So that’s what today’s post is all about. I’m not going to go very deeply into the history, nor the proposed futures, of these lots. But I do want to broadly cover the extent of change that’s taking place on College Avenue right now. This is notable. This is history being lost and history being created. This is a re-creation of a street that has already been recreated many times over. It’s just one more iteration. But it’s an iteration that we’re all going to get the chance to experience. So I encourage you all to take note. Let’s honor the Fort Collins that is passing while eagerly welcoming the new.

Changes to College Avenue in Midtown

Though the part of College Avenue I walked through the other day is all north of Prospect, there has also been several significant changes made recently in Midtown Fort Collins as well. (What constitutes “midtown” changes with time. The present day usage generally refers to the area south of Prospect and north of Harmony.) 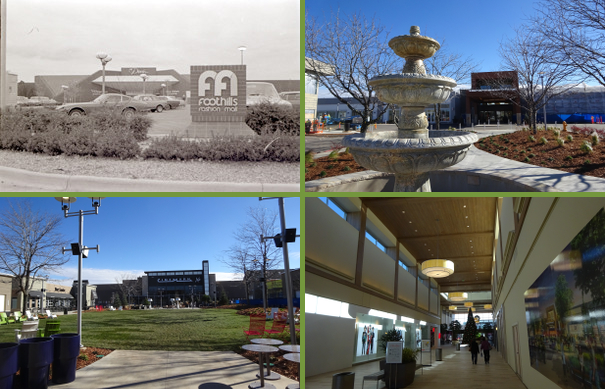 The most significant change is, arguably, the new and improved Foothills Fashion Mall. The area is still under development, but already the entire look and feel of the area is notably different. 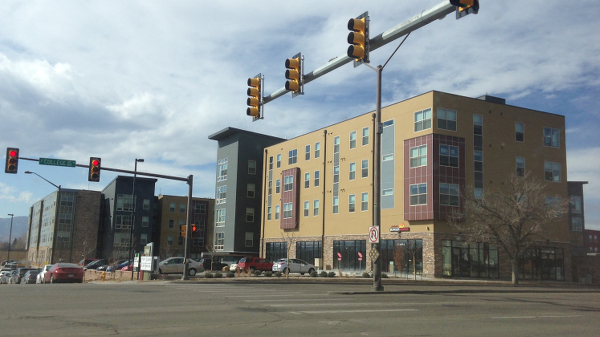 The Summit consists of two buildings between College Avenue and the train tracks by Spring Creek Trail. There are 220 living units between the two buildings for a total of 665 bedrooms. This transit oriented development was built with minimal parking in order to encourage students living in the units to use the MAX transit line that passes nearby. Since the buildings were done before MAX was, students ended up bringing their cars and parking them in the nearby neighborhoods, leading to the City’s first permit parking program.

In between these two Midtown projects is the Midtown Commons Shopping Center, which received a facelift as Jo-Ann’s Fabrics and ARC moved into the space that was vacated by Sutherland’s.

Changes to College Avenue Between Prospect and Laurel

The most significant levels of change will be taking place north of Prospect as multiple projects have been proposed along the Avenue. It should noted that College, south of Olive, was originally primarily residential. During the 1960s and 70s, several homes were removed and replaced with new commercial buildings. The changes taking place now continue this trend as more houses are removed and more commercial (some with multi-family residential included) are built. 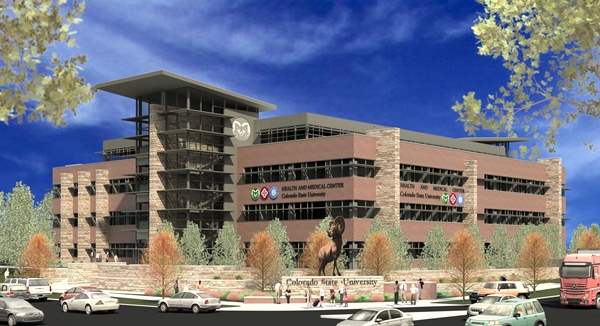 On the 1400 block of S. College and the 100 block of W. Lake, multiple houses and out buildings are going to be torn down. (A local woman is trying to save two of the houses. You can read more about that in the post entitled, “Take a peek inside two houses that will soon be torn down.”) 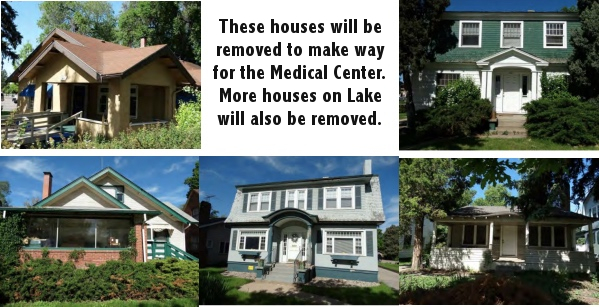 The new medical center will also create a gateway to the University. The plan is for it to be well connected to public transit, making it easy for students and the public to access. There will also be parking included on the north side of the project. And CSU is building a new parking garage just a block north of this along S. College. 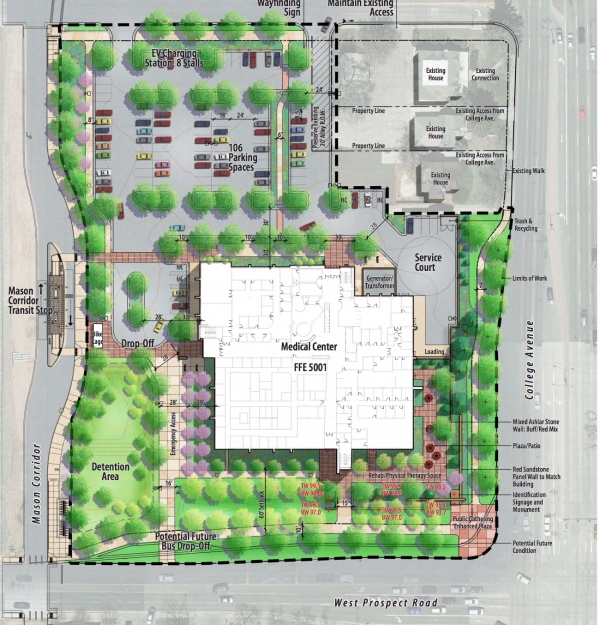 There is a sizable setback from the street along with lawns, trees, and gardens, which should help to keep the somewhat residential feel. (There are still houses just across College from this location, though they’re all used for commercial purposes at this point.) 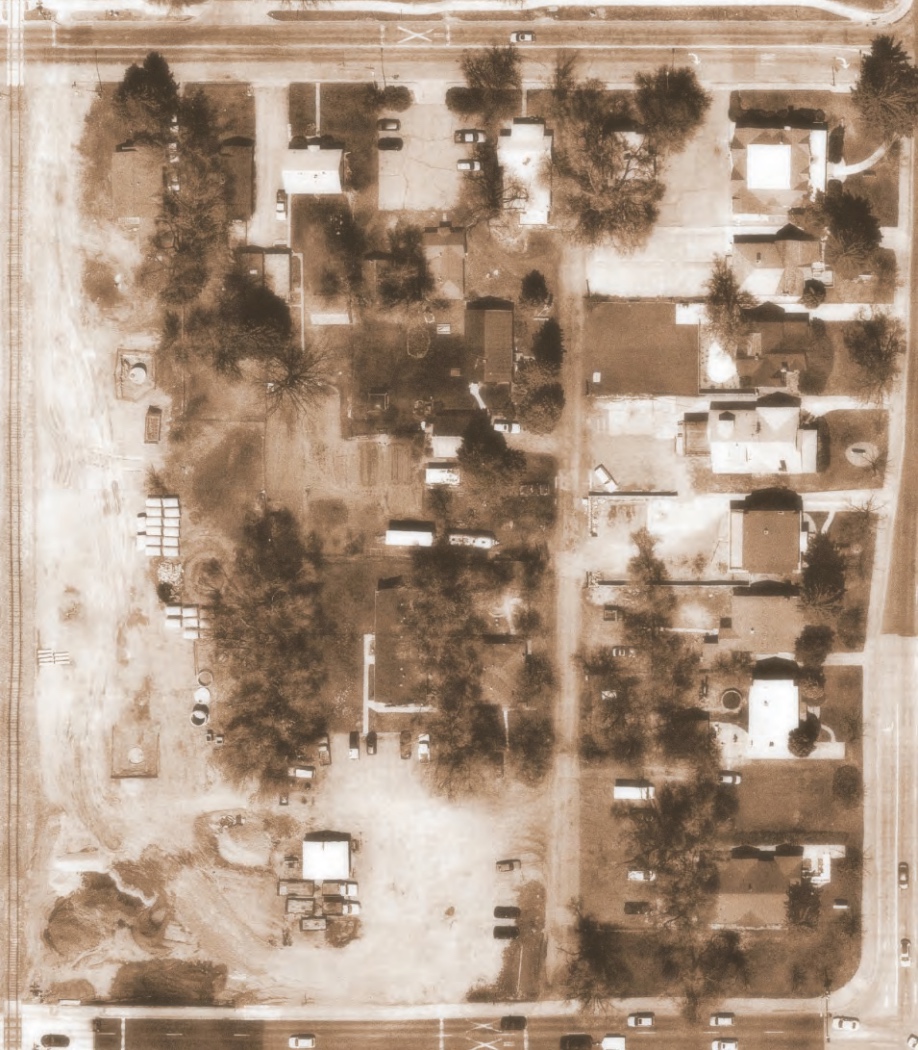 This aerial view of the block gives a sense of how many buildings are going to be removed to make way for the medical center.

As I said above, a new parking structure is going up on the west side of S. College between Lake and Pitkin. Then, as we head north, the next change to take place will be on the east side of the street, at the corner of College and Locust. There is a gas station there that is going to be replaced with a multi-use property. The first story will be commercial and the second and third stories will be residential. 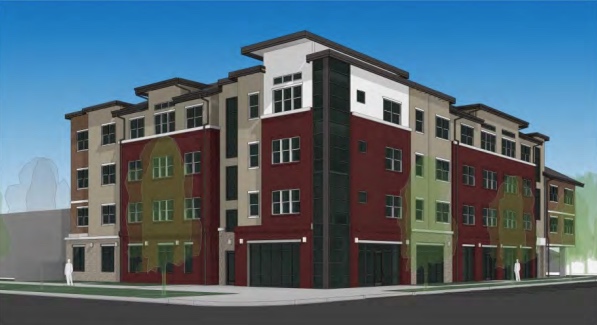 The gas station on this spot is already in the process of being torn down. 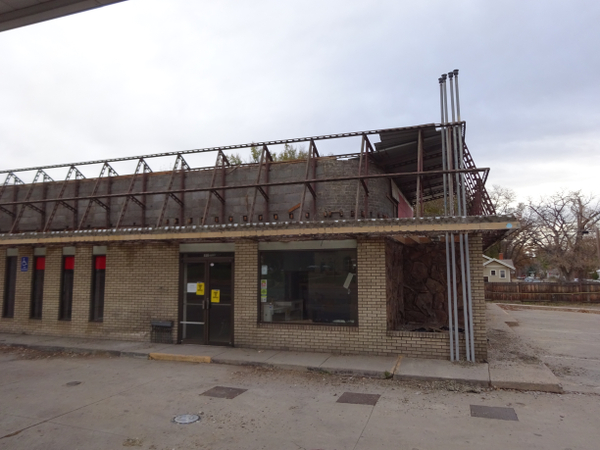 We seem to be losing gas stations right and left in this town. One at the corner of Mountain and Shields was already torn down. This one is in the process of being torn down. And this morning’s paper made mention of one at 1100 Oakridge Drive being turned into a pizza place. 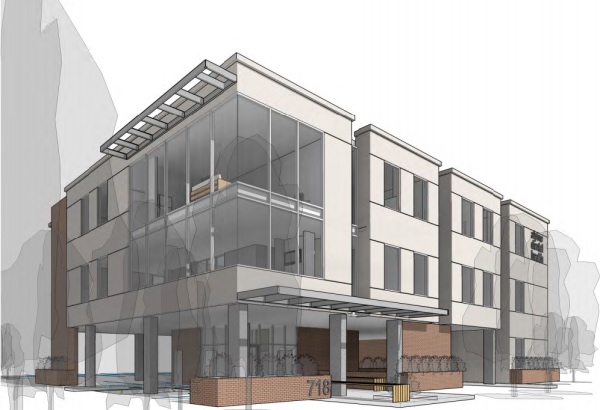 Just one block up, between Plum and Laurel, a multi-use building containing a dental office and residential housing has been proposed.

Its construction will require the removal of three houses along College.

Changes to College Avenue between Laurel and Olive

There are two significant projects in this next section of College Avenue.

The Bohemian Foundation is creating a Music District just north of Laurel on S. College. The two houses on the left used to be the Garment District. The gap in the middle used to be a 1960s era building that came out to the sidewalk and housed a music shop. The building to the far right has been gutted and is being entirely redone on the inside.

At the intersection of Mulberry and College there are no projects in the works that I know of, but the Safeway block was recently purchased by a company that says they’re not going to make major changes, but will give the building some TLC. There has been speculation on what might happen on the side of the street where Sports Authority and Wells Fargo are, but I haven’t seen anything that’s actually been proposed. 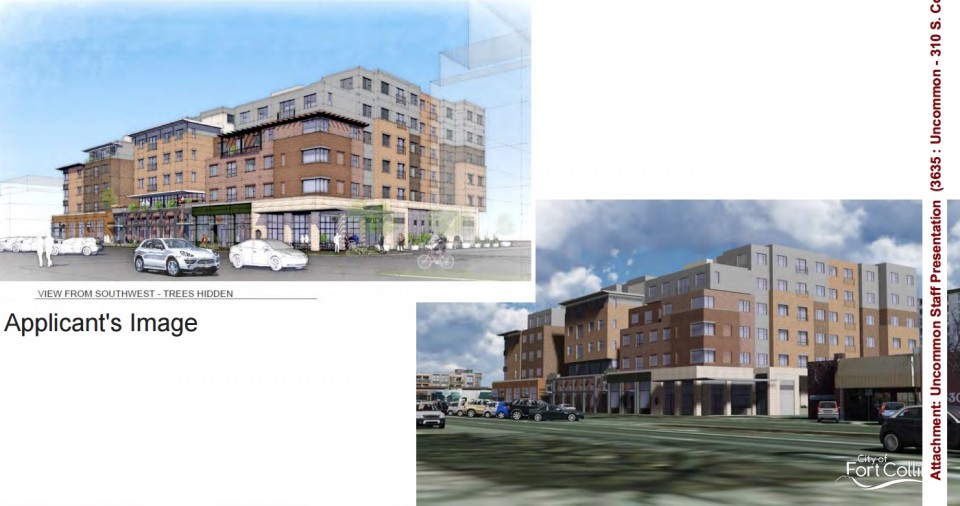 And last, but not least, is Uncommon, planned for the southeast corner of College and Olive. A company from Chicago has proposed a building that would contain 116,800 square feet of residential space in 119 units (200 bedrooms) and 11,000 square feet of commercial on the first floor on .804 acres of land where the Perkins building and parking lot stand now.

This has been a particularly contentious project. The original proposal was much more box-like than what is shown above. After working with the City staff, the architect made several modifications that greatly enhanced the project, especially along the College Avenue side. However, the mass of the building on its east facade remained quite bulky and the City staff recommended denial of the project. The Landmark Preservation Commission agreed with City staff, with 2 members dissenting. But when the project went before the Planning and Zoning Board, they determined that the project meets or exceeds the required code and passed the project with two of their members dissenting. Ross Cunniff, a city council member, has appealed the P&Z decision. He says that he’d like to have a better understanding of the P&Z’s reasoning when they chose to ignore the staff and LPC recommendations. So we still don’t know if this project will get final approval to be built here in Fort Collins.

And there you have it. Multiple changes taking place along the College corridor in a very short period of time.

As I said above, change is inevitable. The real question in my mind is how are we changing. Are we doing so in a way that builds density but still maintains a sense of what Fort Collins is? How do you measure something so subjective? What is there about Fort Collins that makes it unique and how do you capture that in a building? It’s a topic that I could write a whole ‘nother post about. So I’ll leave it here. As a community, this is a hopefully a topic that we will talk about repeatedly as more and more development projects are brought to bear.

The image of the CSU Medical Center came from the Adolfson & Peterson Construction website. The images of the houses along S. College that will be removed for the project were taken from the Landmark Preservation Commission Agenda of September 9th.

The architect’s drawings for all of the other buildings north of the medical center are also from Landmark Preservation Commission agendas. All photographs are mine (with the exception of the old photo of the mall which is from the FC Archive).