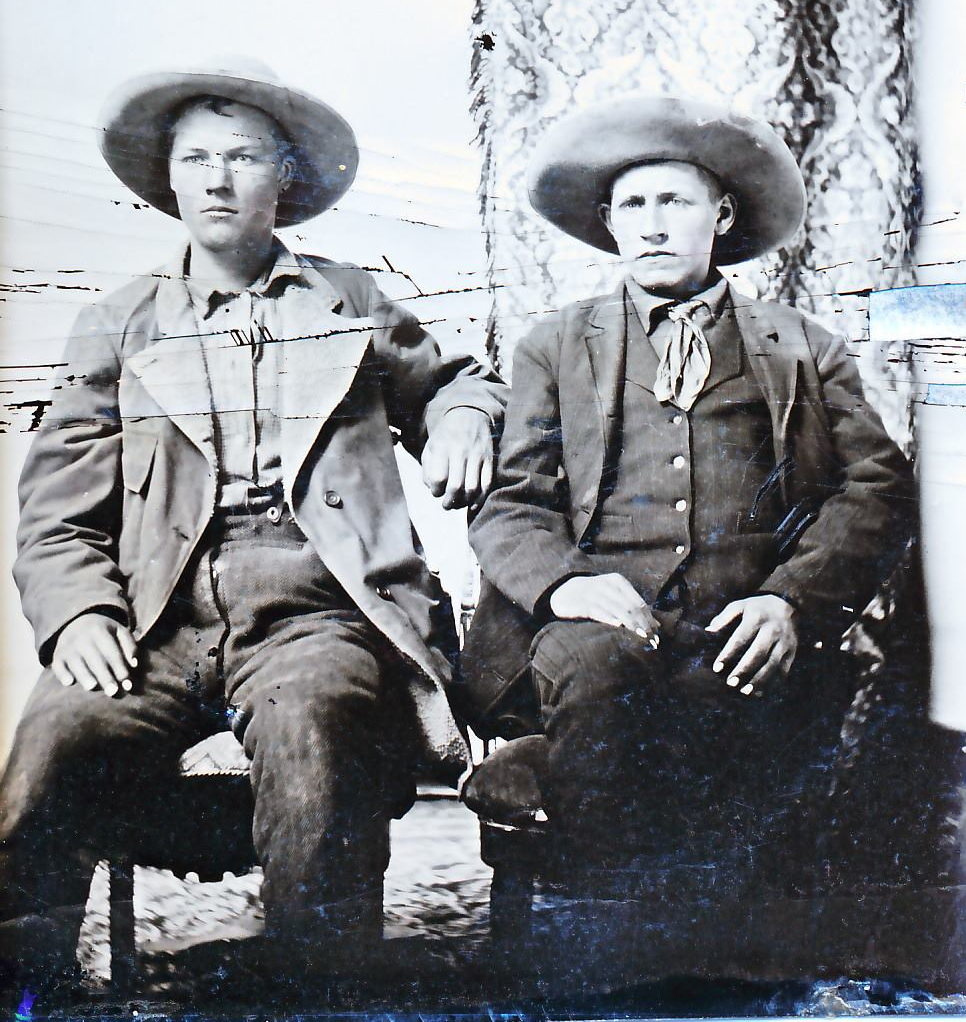 In 1869, A. A. Edwards and Rev. W. T. McAdam came from Mercer, Pennsylvania to spy out a place to build a new agricultural colony. It would be the first in Larimer County. The following year, they were joined by a few other families. And a bit later (1872?) a few more joined them, including Jacob Valentine Collamer’s family. They set up the Mercer agricultural colony around where City Park and the Grandview Cemetery are today. Jacob eventually moved back east, but three of his sons stayed behind – Frank A, Lyman B, and Jacob C.  All three men eventually married and settled in the area. 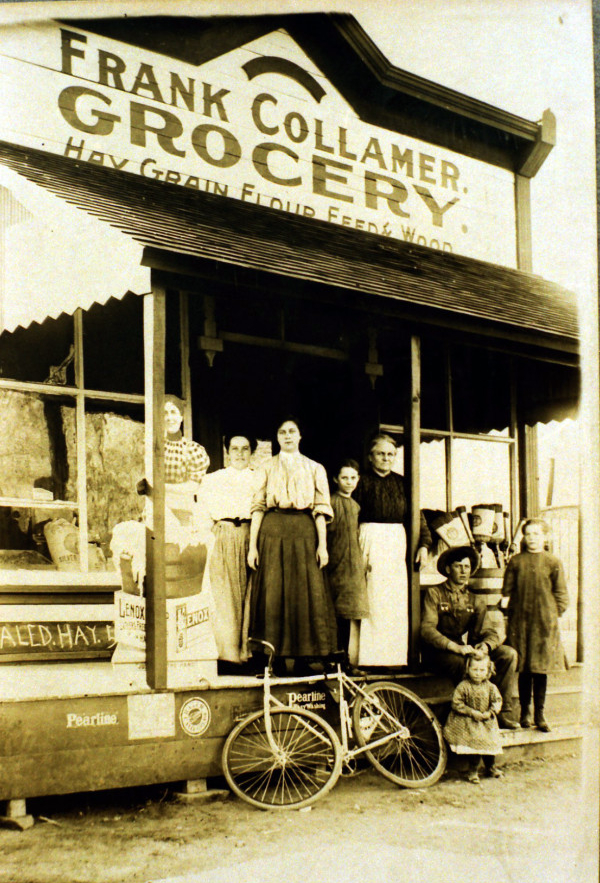 Several members of the Collamer family in front of what is now called the Emma Malaby store (which can be seen on North Meldrum). From left to right: Lenox cardboard “lady” advertisement, Emma Collamer Malaby, Minerva Collamer Stoneburner, Effie Collamer Ayres, Grandma Arthusa Collamer.
(Photo courtesy of the Archive at FCMoD.)

Frank married Achsah Hulse in 1878 and they had ten children: Emma, John, Mary, Frederick, Franklin, Minerva, Arthur, Ruth, Effie May, and Laura. Frank supported the family by selling lumber and running a transfer station. In 1884, he decided to try his hand at cattle ranching. He pulled together most of his savings and purchased 17 head of cattle, which had been driven in from Kansas. The animals all looked to be in good health when they arrived in Fort Collins, but after they were bought and put out to pasture, they started to fall ill. Within a matter of days, all of Frank’s cattle had died of Texas fever and all of his investment went up in smoke. 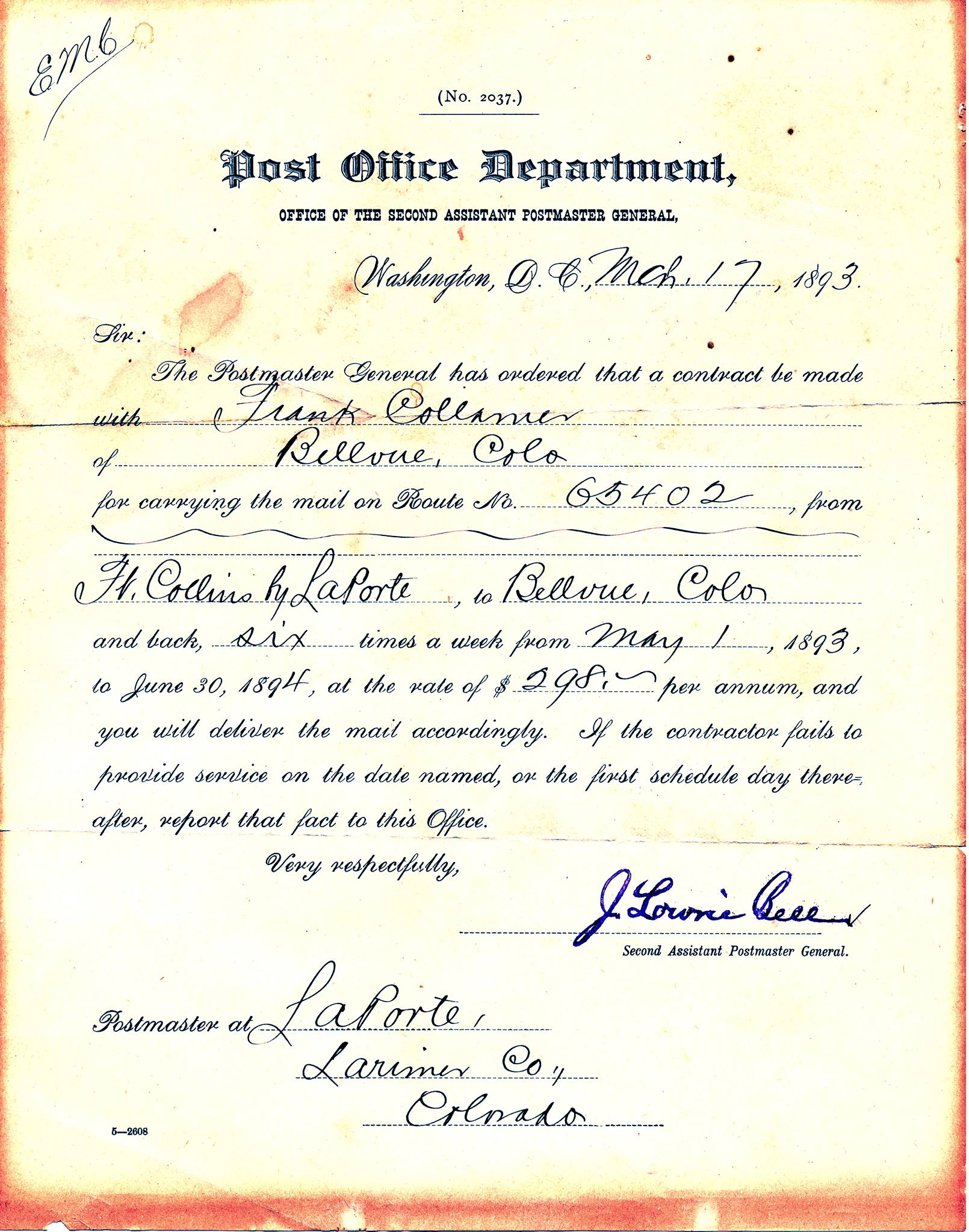 Frank Collamer contracted with the government to carry the mail. (Document courtesy of Jim Burrill.)

In 1893, Frank was able to get more steady work with the post office, delivering mail between Fort Collins, LaPorte, and Bellvue. He also continued to sell wood and carry passengers from Fort Collins into the mountains. For awhile he took Japanese workers up to the Laramie-Poudre irrigation tunnel. The smaller Japanese men were better suited to working in the cramped tunnels than the larger Europeans.

Two of Frank’s kids, Franklin (Frank B.) and Arthur (Art) followed in their father’s footsteps, selling lumber and hauling goods. Frank B. and Art Collamer ran a stage line from Fort Collins all the way out to places like Walden, Laramie, North Park, and Pink Hampton. They started with a team of four horses, but eventually upgraded to a Model T Ford. And after World War I, they changed up again to a four-cylinder Dodge. In time they eventually bought a 7-passenger Buick.

Frank and Art bought a store in Walden and continued to run their stage line, but in addition to hauling passengers and parcels, they also hauled goods for their store. Every chance they got, they added items to their trip in order to cover the cost of gasoline. So at times they carried hay, honey, bread, and even pigs or calves that they’d put in crates and strap on to the running board on the side of the car. They would buy bread from Schauer’s bakery at 4 cents a loaf, take them up to Walden and sell them at 5 cents a loaf. 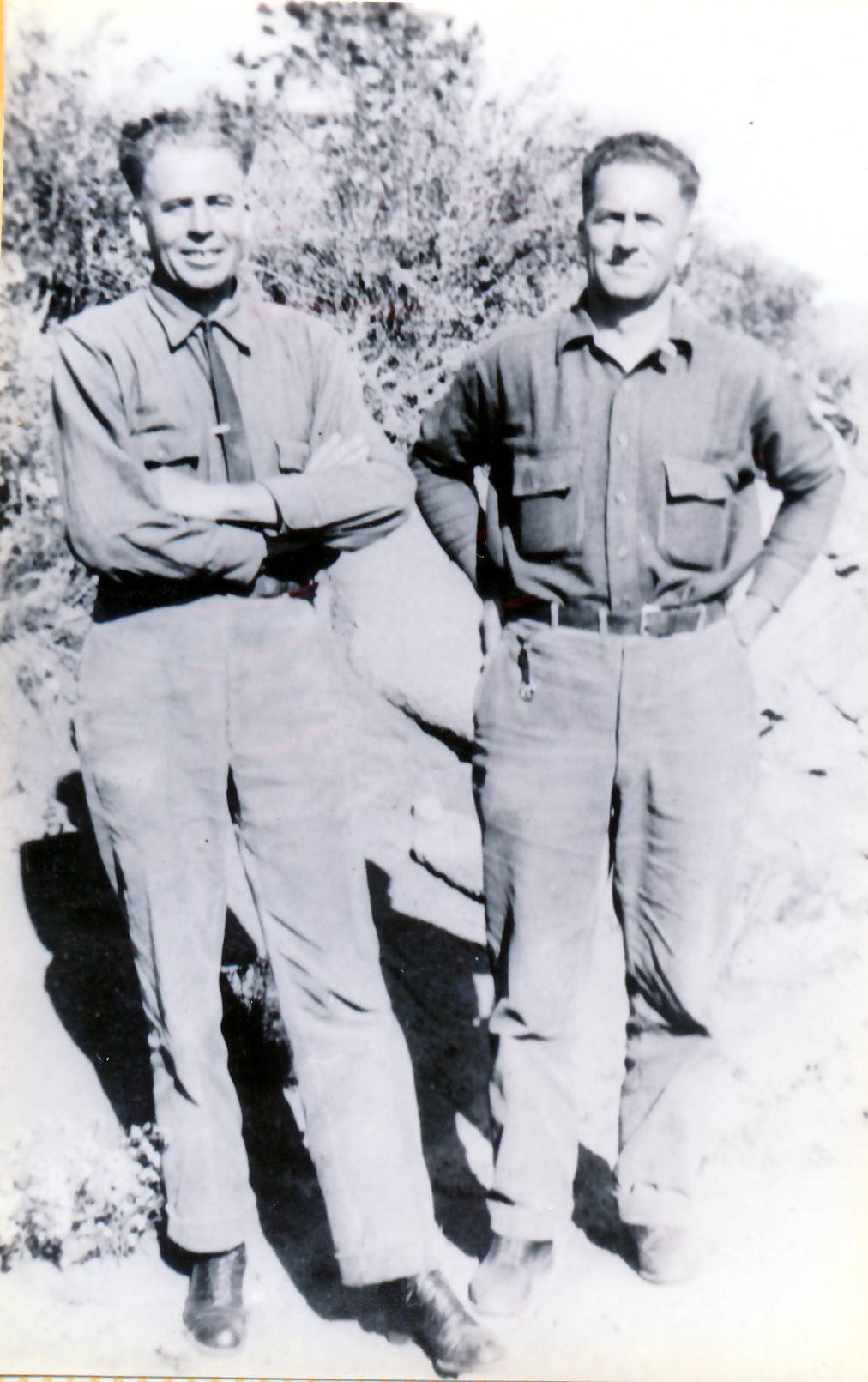 They hauled a lot of passengers and along the way the Collamers would tell stories. One story that Frank particularly liked to tell was about attempting to convert a young boy to Christianity. Art recounted the story to an interviewer in 1970, and it went like this: 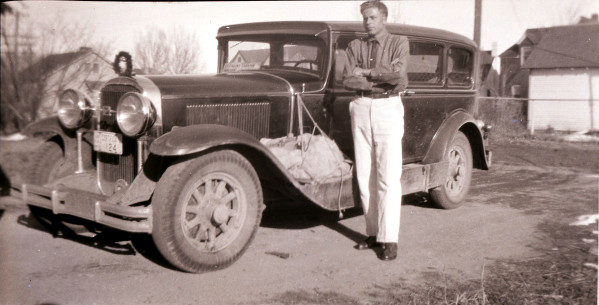 Art Collamer with one of the vehicles that he used for the stage line.

The roads these gentlemen traversed weren’t the slowly steeped, paved roads that we have today. There were ditches where the guys would have to replace the planks over them before they could cross with the horses or their car. In winter, there were some places that they could only reach by wearing snowshoes and pulling their goods with a sled. During snow storms, they’d have shovels with them and often had to shovel their way through.

One year the county commissioners were trying to decide if they should make improvements to the pass up to North Park. They sent a women with Frank Collamer to look over the road through the pass. She was a county superintendent and would report back to the commission. Frank took her in the Dodge that the brothers used, but at one point the road was so bad that a rock knocked the drain plug out of the gas tank and the gas started streaming out. They knew that if they lost all of their fuel, it would be a very, very long walk to the nearest gas station. So the woman jumped out and plugged the leak with her finger while Frank grabbed some wood and whittled a new plug for that gas tank. You would think that would be enough to convince the commission that the road needed repair, but they apparently decided against making any changes at the time. 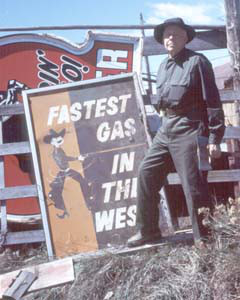 Art Collamer
(Photo courtesy of the Archive at FCMoD.)

Frank and Art also made money off of a few real estate deals and from breaking horses and selling them. But they eventually decided to invest in a filling station. They were known for their quick service and, during the war, for serving gas to folks who were out of gas stamps. They’d pump gas with a promise of collecting the gas stamps when they came in. They were soft-hearted men and always seemed to help others when they could. 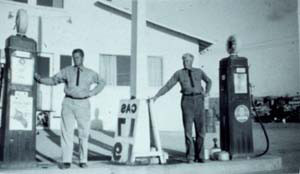 The Collamer’s Gas Station
(Photo courtesy of the Archive at FCMoD.)

The old stage lines were an important life line for the folks living up in the mountains. They tied communities together despite rough roads and far distances. Men like Frank Valentine Collamer and his sons, Frank and Art, risked snowy, muddy, stormy trips along steep mountain passes bringing people, mail, and goods, as well as news and a connection with the rest of the country in a time before radio or television. 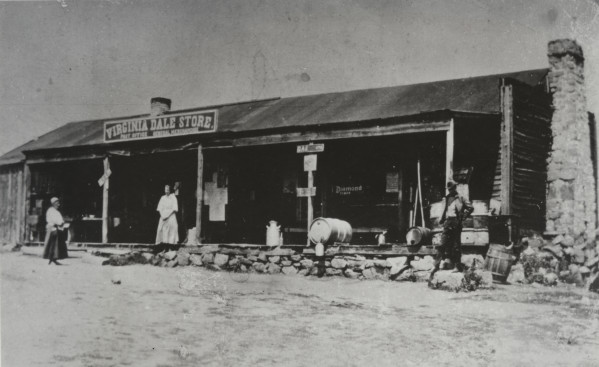 In addition to the stage line, there were stage stops that provided a place for the stage riders to rest, to find refuge from a storm, or to stop and swap goods and stories. One such stage station in Virginia Dale is still standing and the Virginia Dale Community Club is holding a fundraiser this weekend to support the upkeep of the structure.

And on Saturday, June 14th, from 9am – 4pm, there’s a whole series of speakers, crafts, games and demonstrations, and at 2:30 the Cheyenne Gunslingers’ will put on a show. Saturday’s events are free, but donations of canned food, winter hats, or gloves for Harvest Farm in Wellington would be appreciated.

There are a lot of events for history lovers this weekend. Check out the History Now newsletter online for more details. 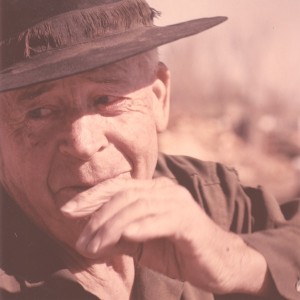 Most of the information in this article came from the transcription of a couple of interviews with Art Collamer. The first interview was conducted on June 12, 1974 by Jonathan Anderson. The second was done on March 9, 1976 by Charlene Tresner. Both interviews have been bound into a single book which is available to borrow through the Poudre Public Library District.

Most of the photos shown here are thanks to Jim Burrill, Art and Frank Collamer’s nephew. (Jim is the grandson of the Ruth mentioned in the list of children born to Frank A. and Achsah Collamer.) Some photos are attributed under the photo. The ones without attribution were also from Jim. Thanks so much for sharing your family with us, Jim.

Four of the photos came from Fort Collins History Connection, which is the Archive at FCMoD’s online collection.