From the FCHS Class of 1943, from left to right:
Arlene Simianer, Louis Hamman, Ray Becker, Phil White, and Jim McIver.

It was the fall of 1941. The football season was coming to a close and the Fort Collins High School football team was headed to the state championship game against Salida. It was a close game, but Collins claimed the victory with a score of 7 – 6. The next day, football player Jim McIver couldn’t wait to see the newspaper, certain that the Collins win was going to be front page news. But for some reason the paper hadn’t arrived at its usual time. So, not having television yet, he went to turn on the radio. Surely they would be covering the big win. Instead they were rattling on and on about some kerfuffle over on some island in the Pacific…. It was December 7th, 1941. Pearl Harbor had just been bombed. 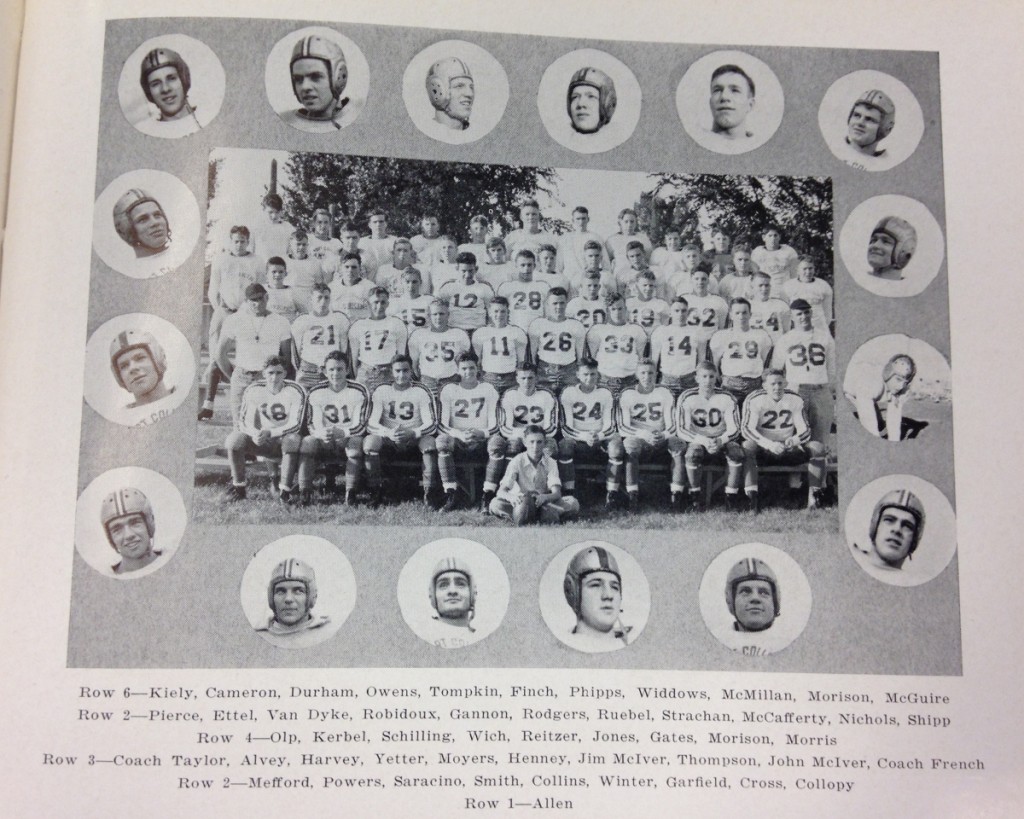 Many of the teenagers weren’t old enough yet to head off to fight, but they found other ways to support the war effort until they came of age. High schoolers were let out early to harvest sugar beets since many of the usual harvesters had enlisted or been drafted. Phil White remembers harvesting beets where the Foothills Mall is today.

One enterprising young man supported the war effort by digging up worms and selling them to fishermen. He sold 7,500 worms at 25¢ for a hundred and was able to raise the $18.75 it cost to purchase a $25 war bond. 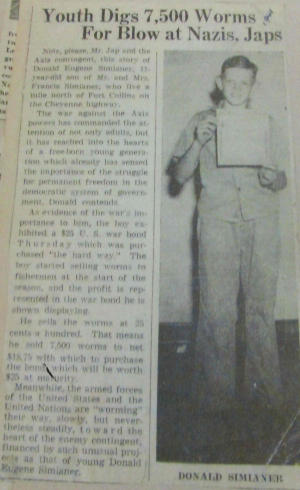 “Note, please, Mr. Jap and the Axis contingent, this story of Donald Eugene Simianer, 11-year-old son of Mr. and Mrs. Francis Simianer, who live a mile north of Fort Collins on the Cheyenne highway.” — This is the first sentence of the newspaper article about Donald’s contribution to the war effort. The photo is from Mrs. Simianer’s scrap book and was provided by Donald’s sister, Arlene.

The Fort Collins High School Class of ’43 sent many young men to war. Two men from that class remained behind, however. Sugar beets had long been a staple of Fort Collins area farms. Once Japan entered the war, the supply of sugar from the Pacific islands was cut off, either because the Japanese blocked imports or cargo ships had been diverted to the war effort. Meat was also in short supply and Fort Collins ranches were important sources for citizens and soldiers alike. So young farmers and ranchers were an important part of the war effort and were given an exemption from the draft.

Phil White enlisted as an army engineer. (Photo from a book that Phil White’s daughters put together entitled, ” “.)

Upon enlisting or being drafted, soldiers first went through boot camp, then they were often sent to college for more specialized training. Colorado A&M hosted several military-oriented programs including pilot, clerical, and veterinary training and a program for army engineers.

Phil White was one of the men from FCHS’s 1943 graduating class who worked as an army engineer during the war. Stationed in the Aleutian Islands, Phil was involved in constructing military bases that would help to bring the Allies just that much closer to Japan. They built several air strips and a large hospital. One of the islands where they worked, Amchitka, was used in the 60s and 70s as a nuclear bomb testing site and is no longer habitable. 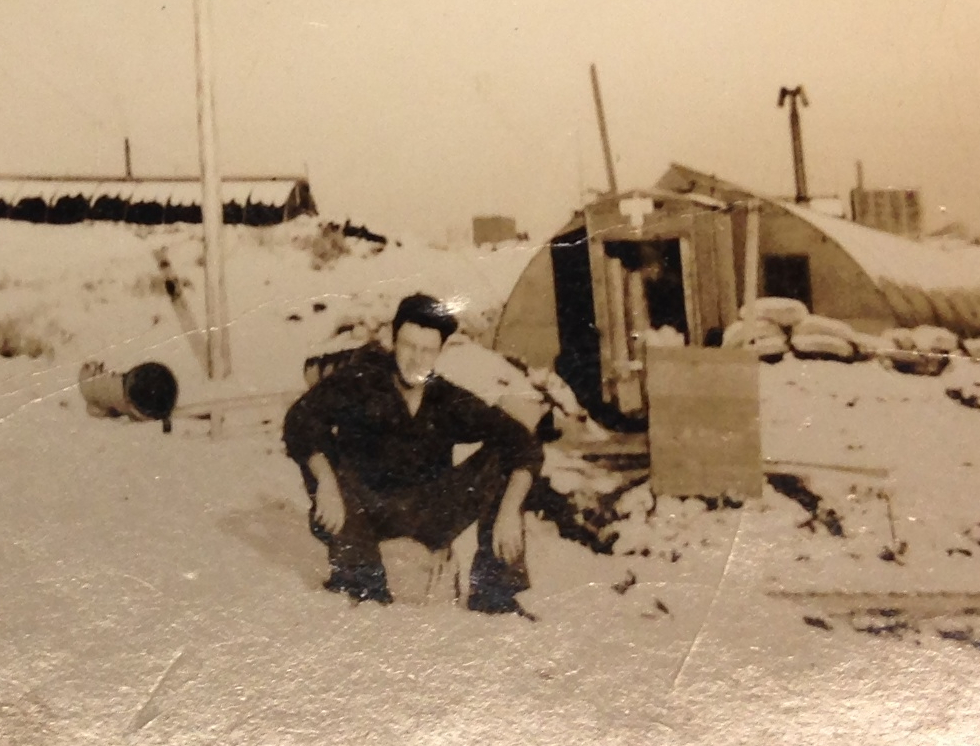 Phil White, without a jacket, in the Aleutian snow.

The dismal conditions on the islands led to low troop morale and a condition called the “Aleutian stare.” The military eventually abandoned plans to pursue actions from that route.

Louis Hamman enlisted in the Army Specialized Training Program (ASTP). He was a little older than the other FCHS graduates (As he says it, he liked high school so much that he went an extra year.) and was able to enlist immediately after graduation because he was already 18. He went right to basic training and then was shipped to New York University  — Washington Square College. The United States had counted on winning the war with air power. But by the time Louis had been at the college for six months, the army found itself in need of more infantry men, so Lou and his cohort were shipped out. Louie ended up with the 104th division, which landed 3 days after D-Day in France. They chased the Germans out of France, Belgium and Holland, pushing them back to the Elbe river where they met the Russians. He was shipped back to the states 2 days after war ended so that he could be redeployed to the Pacific. But the atomic bomb was dropped as they were loading onto the ships, and he didn’t have to go.

While Louie was overseas, students still back in high school were required by their English teacher, Mary Tyre, to write letters to service men. One of Louie’s girl friends handed out his address to several kids so he received multiple letters. One was from Bob Cunningham, whose family owned the filling station. Louie received two letter’s from Bob. The second one said, “Please write back and tell Old Lady Tyre that you liked my letter or I’ll flunk.” So Louie wrote to the English teacher and said he enjoyed receiving all the letters, but he especially enjoyed Bob Cunningham’s letter. So when Louie came home Bob gave him all kinds of gas coupons in thanks.

Ray Becker was drafted into the army as a medic. After basic training in Abilene, Texas and medical training at Fitzsimons Army Hospital in Aurora, he was shipped to Bushnell Military Hospital in Brigham City, Utah, where he saw his first amputation. Once trained, Ray was assigned to various ships traveling back and forth across the Atlantic Ocean. Ships heading to Europe were full of troops and supplies and space was tight. Men slept in hammocks that had to be pulled out of the way during the day because the same room was also used for dining. Return trips from Europe to America were full of the wounded being brought back for medical care. Ray wasn’t assigned to just one ship, but was sent on whichever ship was available and had need of him.

On one trip there were 10,000 troops, plus crew. The ship had to feed the men around the clock. They were only allowed out on the deck for 20 minutes a day. There simply wasn’t enough room to allow them out for longer than that. The ships had double doors so that the light never escaped from inside so they couldn’t be seen at night. And at midnight, all of the garbage from the ship was tossed overboard, a practice that certainly wouldn’t be allowed today.

Jim McIver as a sophomore at Fort Collins High School. (Photo is from the Miller Collection at the Fort Collins Archive.)

Jim McIver, the football player mentioned above, enlisted in the Navy after graduation. Recruiters had come to Fort Collins High School and talked six of the seniors into attending a program in San Francisco, on Ferry Island, where they were tested and then given orders as to where they would go in the war. But this was in December of 1942 and they still had a semester left of high school. So they were told to go back and finish school for their orders to remain valid. Jim wanted to be a pilot, but the Navy had so many candidates enlist that they didn’t have enough airplanes and instructors to go around. So Jim was sent to college instead. But after a semester he said, “This isn’t what I signed up for.” So they transferred him to a land-based patrol that flew back and forth between San Diego, Miami, Jacksonville, and various other places. Their mission was to design a plane that could be stationed on land, as opposed to on aircraft carriers. In order to make it work, they had to find a plane that could be modified such that it could carry enough fuel to make it from the west coast, or from Hawaii, to its destination. They worked primarily with the B-24, changing the wing shapes and design and turning the second bomb bay into extra storage space for fuel. 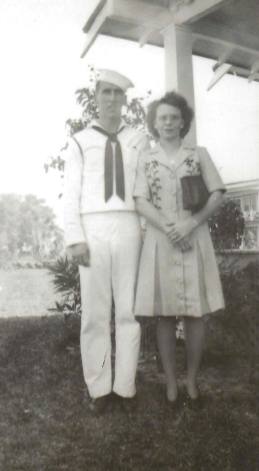 Arlene and her husband posed for a photo. (Image courtesy of Arlene Short.)

It wasn’t only the men who took on the enemy. Women also got involved in the war effort. Arlene Simianer moved to San Diego after graduating from Collins. She worked at the Consolidated Aircraft factory there, which sent airplane parts overseas. Arlene’s husband was a machinist in the Navy and was relocated a few times during the war. They were variously located in Miami, Florida; Norman, Oklahoma; and San Diego, California – each time running into Jim McIver who also traveled back and forth during the war.

It was Arlene’s brother, Donald, that was able to buy a war bond by selling fishing worms. People would come from Denver and other parts of Colorado to go up into the mountains near Fort Collins to go fishing. The family’s dairy farm was located where the North College King Soopers is today and was a convenient stopping place for visitors passing through along 287. 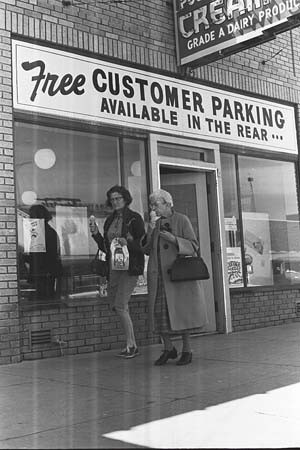 The Poudre Valley Creamery store was located at 145 W. Oak Street. (Image thanks to the Coloradoan and the Larimer County Water Ways.)

Communication from home was infrequent for many of the soldiers that went off to war. Letters would often come once a month, with several letters arriving at once. Phil, out on the Aleutian Islands, found that they had better mail service than most because several of the pilots were also boot leggers and would mail out to the soldiers along with their hooch.

When asked what these Fort Collins graduates missed the most while they were away, besides friends and family, the overwhelming response was ice cream from the Poudre Valley Creamery. In fact, the first thing Louis did when he arrived back home after the war was to swing by the creamery and pick up some ice cream before going to see his parents or friends.

Out of 86 boys that graduated in the class of 1943, two received farm deferments, and one wasn’t accepted because one of his legs was longer than the other, but all the rest were enlisted or drafted into the military. 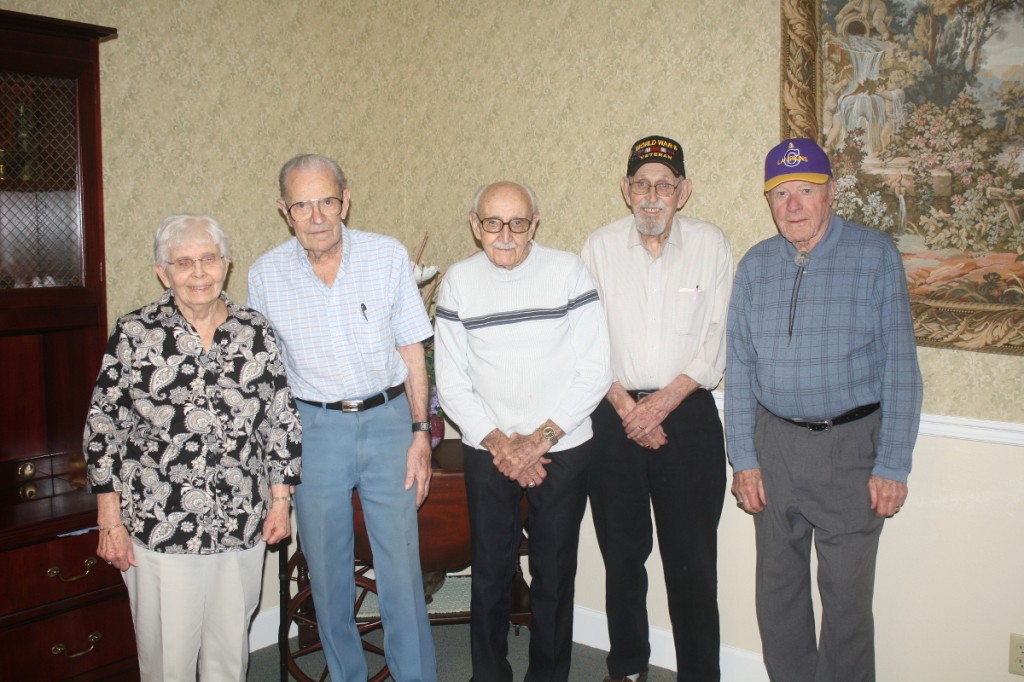 I’d like to thank Ray, Jim, Phil, Lou, and Arlene for taking time to meet with me last week and share their stories. They are truly a Fort Collins treasure.

Other sources for this article:

Information on the need for sugar rationing came from the website Learn NC.

More information on CSU during World War II can be found in the history of the University: Colorado A&M Gears up for World War II. It was on this page that I found information about the war time training that was provided on campus.

Information on the bomb testing done at Amchitka can be found on the Wikipedia page entitled, “Military history of the Aleutian Islands.”