Christmas Shopping in 1930 — Plus a Shoutout to Sponsors

Back in 1930 there was no online shopping at Christmas time. There was no mall and no chain stores surrounded by massive parking lots. Instead there were homemade gifts, mail-order catalogs like Sears-Roebuck, and small, locally owned shops downtown. One such shop was Wolfer’s Market, located at 137 S. College Ave. (Wolfer’s later moved down to the corner of College and Laurel, where Noodles is located today.)

The photo above shows Wolfer’s Market on December 5, 1930. (The photo is from the CSU Digital Archive – #UHPCS05K204220.) Residents could hop on the streetcar and head downtown for all of their holiday shopping needs, from decorations to gifts to food. Note several boxes of apples and nuts available near the front of the Wolfer’s store. There’s also lacy ribbon candies mixed in decoratively in front of the nuts.

Whether you’ve finished all of your holiday shopping already, or you’re still frantically running from store to store, I hope that in the end you’ll have a delightful, and restful, holiday season. 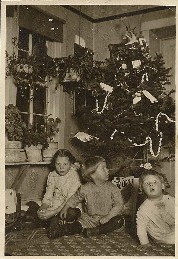 Marion, John and Francis Bee in front of the Christmas tree in 1918. (Photo from Liz Harrison, daughter of Francis Bee.)

What’s really neat about the Bee Farm, though, is the Bee’s tradition of thrift. Items that still might have use weren’t thrown away. Which is why turning the farm into an agricultural museum made so much sense. There are buildings, tools, furniture and much more at the Bee Museum that has been in the family for decades. Many museums are filled with items that help to recreate what the place might have looked like long ago — but the items themselves were found in other places. With the Bee Farm Museum, everything is original!

I wanted to include a Christmas photo from the Bee family in this post. So I contacted Liz Harrison (daughter of Francis Bee) and she sent the above photo over to me with a note that this was “the only Christmas tree they had. Our Grandfather thought it took trees too long to grow to just cut them down.” The man’s got a point.

The museum won’t be open again until May. But in the meantime, I highly recommend you check out this thirty minute PBS film on some of Colorado’s Centennial farms. The Bee Farm is included!

And thank you, Bee family, for supporting Forgotten Fort Collins over the past year! 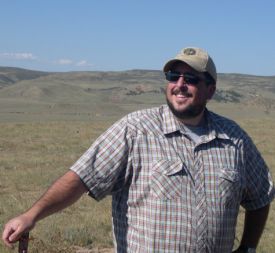 Jason Labelle is the director of CSU’s center for Mountain and Plains Archaeology. (Photo from the CSU website.)

The Fort Collins Historical Society will be starting up again on January 10th at the Masonic Temple located at 225 W. Oak Street at 7pm. (Enter through the back door, or use the ground level floor in front that’s closest to Howes.)

Jason Labelle will be speaking on the earliest inhabitants of what we now think of as northern Colorado. If you’re interested in ancient history, archaeology, Native peoples, or anthropology, this would be a great time to come and hear a Historical Society talk.

All meetings are free and open to the public.