The Building of the Hottel House

Benjamin Franklin Hottel moved to Fort Collins in 1877 at the encouragement of friend and business partner, Joseph Mason. He became part owner in the Lindell Mill (Ranchway Feeds). And he quickly settled in as one of the people who would build and care for the small town of Fort Collins.

Ansel Watrous, in his History of Larimer County, describes Hottel as an industrial pioneer. Though he wasn’t one of the first to arrive in the area, Watrous explains how important he was to early Fort Collins saying, “He was not afraid to invest his money in undertakings that ultimately helped to make Larimer county, its towns and cities what they are today.”

There was clearly a sense that Hottel wasn’t only investing his money for himself, toward the increase of his wealth. But also to provide economic benefit to the community and surrounding agricultural lands. Everything he set his hands to seems to have supported the local economy in some way or other, helping to make Fort Collins a viable, sustainable community. 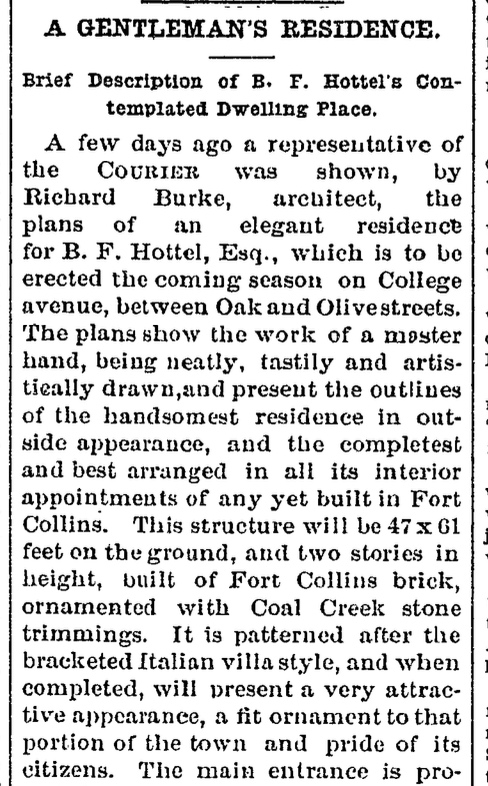 The beginning of an article on the house that was being built for B. F. Hottel on College Avenue. (Fort Collins Courier, December 21, 1882, p. 3.)

So when B. F. Hottel decided to build a grand house for himself and his family on “the avenue,” it was with great excitement and a sense of community pride that residents followed every detail of the building project with eagerness and excitement. Instead of being jealous of Hottel’s fortunes, people recognized that his wealth and largesse were a benefit to the entire population.

Hottel selected a location next to what had once been the Post cemetery. It was just a couple of blocks from the commercial heart of the town, along a grand, wide street that was soon to become the main artery of the community. By December of 1882, plans had been drawn up by architect Richard Burke, an Irishman that had been stationed at Fort D. A. Russell in the Wyoming Territory during the Civil War. Burke moved with his family to Fort Collins in the 1870s, and worked as a contractor and builder in the small frontier community. His drawings depicted a house in an Italian villa style with a welcoming front porch. 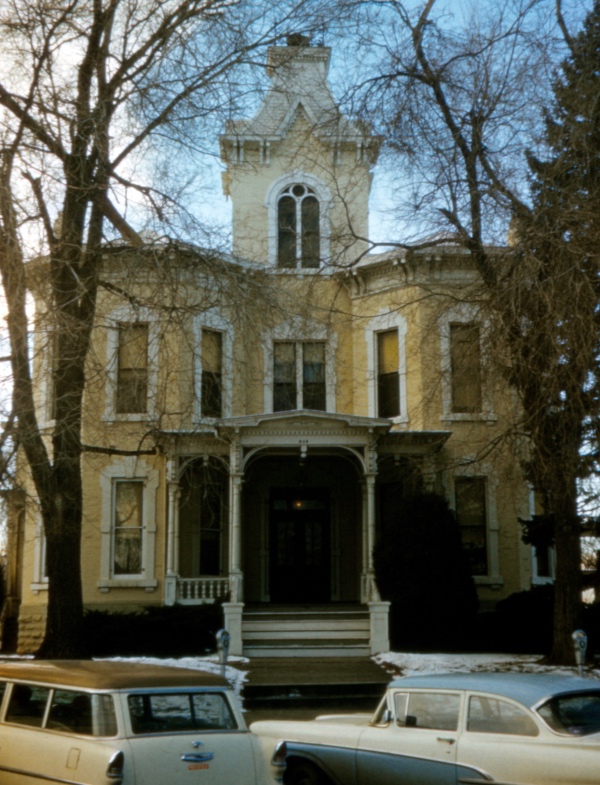 It was in building his new house that Hottel began to look into the possibility of bringing electricity to Fort Collins. As the Fort Collins Courier describes:

Some of our citizens are seriously discussing the feasibility of an electric light plant for Fort Collins. It is generally believed that the scheme might be made a success. Mr. Hottel, we understand, intends to put the electric light in his new residence which he can do cheaply by reason of having abundant power at his mill for driving the necessary machinery. Mr. Hottel has been investigating the subject and finds that the first cost of a plant will be but little in excess of the expense of gasoline, and, as all know the former is much to be preferred on the grounds of safety from explosions and fire. It cannot be long at the farthest before Fort Collins will insist on having the electric light. (Fort Collins Courier, January 18, 1883.)

With a discussion such as this, it must have run through the minds of all that lived in the area that if Hottel was looking into using electricity in his house, perhaps it wouldn’t be long before they would have electric light in their own houses as well. Fort Collins might be a frontier town, but its residents were ready to be on the cutting edge of technology! 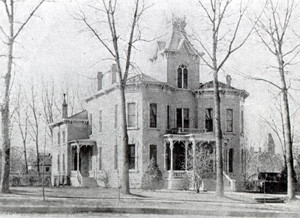 This very early photo of the Hottel house is from the Fort Collins Archives – #H03716.

Though Hottel probably had the funds to import supplies for his grand estate, the newspaper reports make it clear that the materials were all fairly local. The bricks were made here in Fort Collins. The stone for the foundation, window sills and lintels, and so on was from Coal Creek in Boulder County. All the craftsman and laborers were local. It appears, however, that his heater was imported. Reports state, “The entire building is heated by a McGovern & Rutland heater, warranted to keep the room at a temperature of 65 degrees when the thermometer indicates 40 degrees below zero outside.” (Fort Collins Courier, December 27, 1883)

The foundation stones began to be hauled in at the end of 1882, with the foundation completed by early March. The walls of the house (excluding the tower) were up by the end of April 1883. 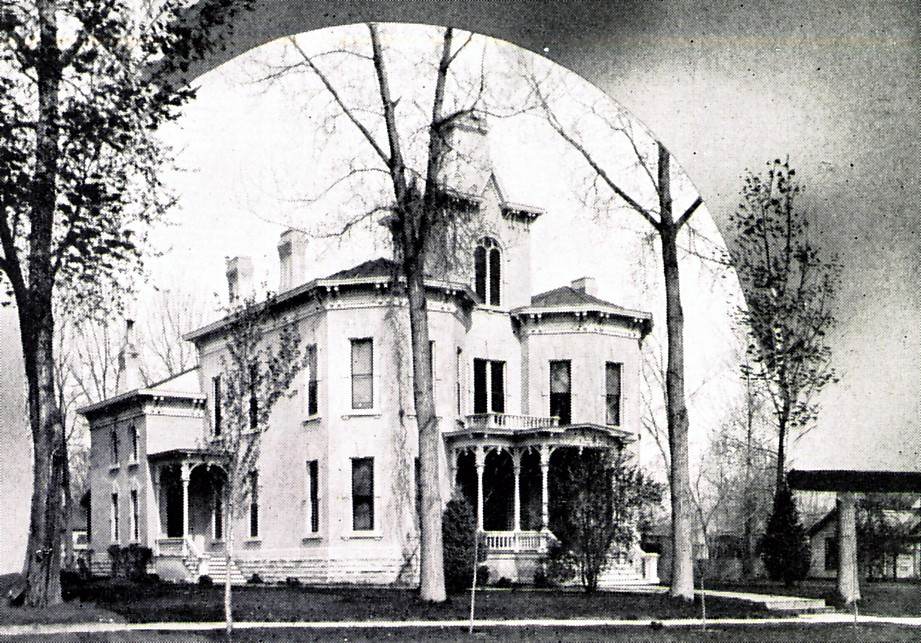 Jim Burrill scanned this photo of the house from the book Sunshine Views of Fort Collins. Note that the Post Office hadn’t been built yet. There’s a house to the right.

The Hottel’s neighbors were Mr. Andrew Armstrong (at the corner of College and Olive, where the Armstrong Hotel stands today) and Mr. Dave Patton (presumably on the lot where the old Post Office stands today… now the Fort Collins Museum of Art). 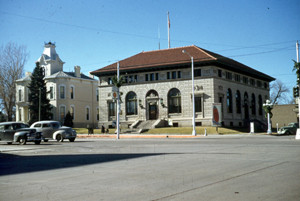 The post office was built at the corner of College and Oak, next to the Hottel house. (Courtesy of the Fort Collins Archive – S00442.)

B. F. Hottel helped the town in many ways. He brought a library to Fort Collins — the Carnegie library located on Mathews, with the pioneer cabins in the plaza just outside. He was instrumental in getting a beet factory in Fort Collins, an important part of the City’s economy for decades. He directed fundraising to build an Episcopal church. And he helped struggling farmers during the Depression. 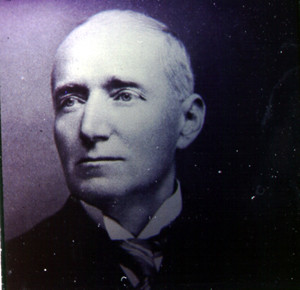 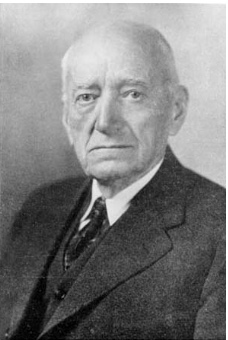 This photo of B. F. Hottel in his later years is from the Fort Collins Archive – H02596.

The Hottel house remained in the family until 1960 when Benjamin’s daughter, Mary Hottel Street, died on November 12, 1960. In 1962 the house was razed to make way for a J. C. Penney (now Ace Hardware). As Barbara Fleming explained in one of her weekly history columns, “With the disregard for historic buildings that characterized much of the 20th century in the United States, no thought was given to saving the structure.”

David Everitt, in speaking to the Fort Collins Historical Society on April 7th about the tremendous influence his father, Bob Everitt, had in developing the city during the huge population boom of the 60s and 70s, said that his one big regret was that the Everitt Company chose to demolish the Hottel house rather than to find an adaptive reuse for it. The preservation movement was in its infancy in the United States at the time and the value of these older buildings simply wasn’t understood.

Thanks so much to Jim Burrill for sharing the photos that his grandma Ruth Collamer Dermody took when she heard that the Hottel house was slated for demolition.

To learn more about the house, check out the extensive photos and descriptions that can be found on the City’s history site: Welcome to the Hottel House, 215 S. College. There are also several more photos on the Fort Collins Archive site.

I accessed the Fort Collins Courier thanks to the Colorado Historic Newspapers website.