There are things that we pass down from parent to child to grandchild: photographs, stories, homemade furniture, favorite books, significant items of jewelry. Some families have a family Bible full of genealogical information. Others pass on property — houses and land. These tangible objects speak to us of who our people were, what they valued, and how they lived. But some of our ancestors left behind legacies which can be enjoyed by a far wider range of people. Musical composers, authors, and architects come to mind. Their works pass into the domain of musicians, readers, and residents, creating communities among otherwise unrelated people. It has been through this context, the appreciation of a wider community, that I have learned about, and grown to appreciate, the legacy that Montezuma Fuller, an early architect, left behind in Fort Collins. But just last week, I had the privilege of meeting Montie’s great grandson, Archie Call, and I was able to connect to this part of Fort Collins’ history in a whole new way. 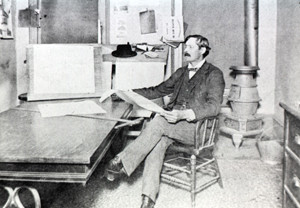 Back in early February, I received an email from Archie. He introduced himself as Montezuma Fuller’s great grandson and asked if I’d heard of the man. I replied, “Of COURSE I know about Montezuma Fuller!!!!  He’s THE name in historic architecture in town.” Well long story short, after an exchange of emails, we determined that while Archie and his wife Chey were in town, we’d meet up and take a brief tour of some of Fuller’s creations.

I invited a few other local historians and two of them were able to join us: Wayne Sundberg (who many locals will recognize as their history teacher from junior high days) and Judy Jackson (keeper of Bellvue’s history). The buildings that we saw will be included in a future article.

For Archie, and his wife Chey, the interest was in seeing the artifacts left behind by Archie’s great grandfather. But what intrigued me was the ability to talk face to face with a living descendant of a local legend. (I have interviewed several descendants of pioneer families, and I must admit that I am thrilled every time. It’s one thing to walk through a museum and see a stagecoach or a dress or photograph. But there’s an extra layer of Wow! involved when you talk to someone who jots notes on their iPhone or  mentions documents found online — so they’re clearly people of our present day — and yet they have memories, and family stories, and connections that date back to a time that’s really foundational to where we are as a city today.) 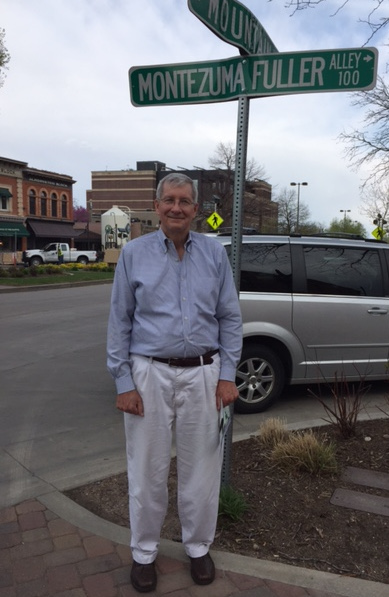 As we toured about, we talked. Archie shared stories and speculations about his family, which went beyond what can be found in the City Archive or the various biographies written about his great grandfather.

Here is a glimpse into the life of the Fuller family.

Montezuma Welesley Fuller was born in Nova Scotia on November 13, 1858. He was the fourth of seven children, but less than a year after his birth, his three older siblings all died within days of each other, most likely due to the diphtheria epidemic that passed through Nova Scotia that year.

The other siblings all had rather mundane names — Eugene, Fred M., Clarence, Amelia, Fred S., and Stanley. Montezuma’s far more colorful name has often been a point of notice among historians, though none that I could find had any clue where it had come from. Archie Call has a theory, however. There was a trans-Atlantic clipper ship by the name of Montezuma that frequented the part of Nova Scotia where the Fuller family lived. Could it be that Montezuma was named after that ship? Whatever the case, Montezuma frequently went by the nickname of Montie, and in the newspaper he was generally listed as M. W. Fuller. 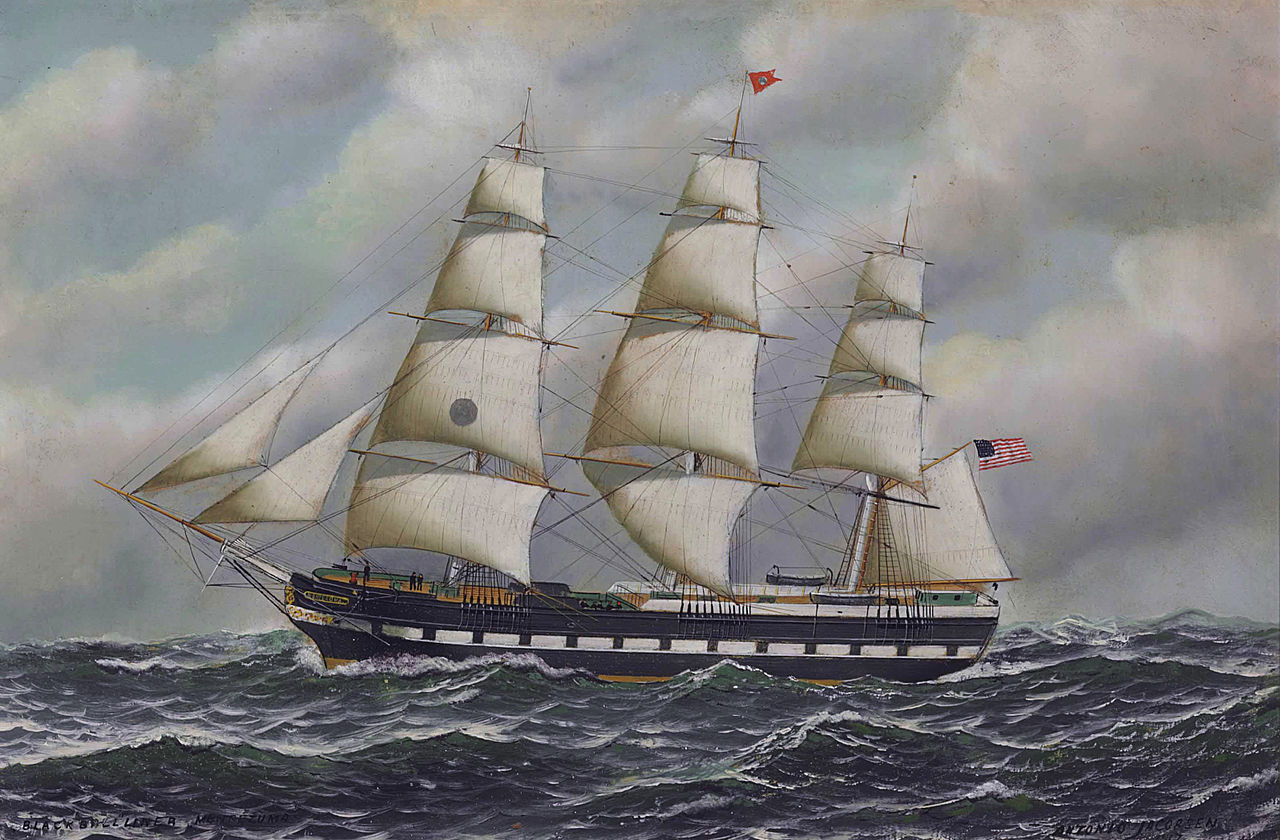 Montie trained as a ship’s carpenter in Nova Scotia, but in 1879 he decided to move to the United States. He worked for awhile in Kingston, New York, where he appears to have met Guy and Bessie Graham, and more importantly, their daughter Lizzie. In 1880, Montie moved to Colorado and the Grahams appear to have followed fairly soon after.

In the 1880 census records, M. W. Fuller is listed at a boarding house on College Avenue. Lizzie Graham just happened to have found a house servant job in the same residence. (Both were marked as being single at the time.) There Lizzie assisted the owner of the house, Bettie S. with the chores. (Unfortunately Bettie’s last name is covered with tape on the census and isn’t legible. Bettie had a 4 year old son, but no husband was mentioned.) Montezuma Fuller and Anna Eliza Graham were married on January 27th, 1881. 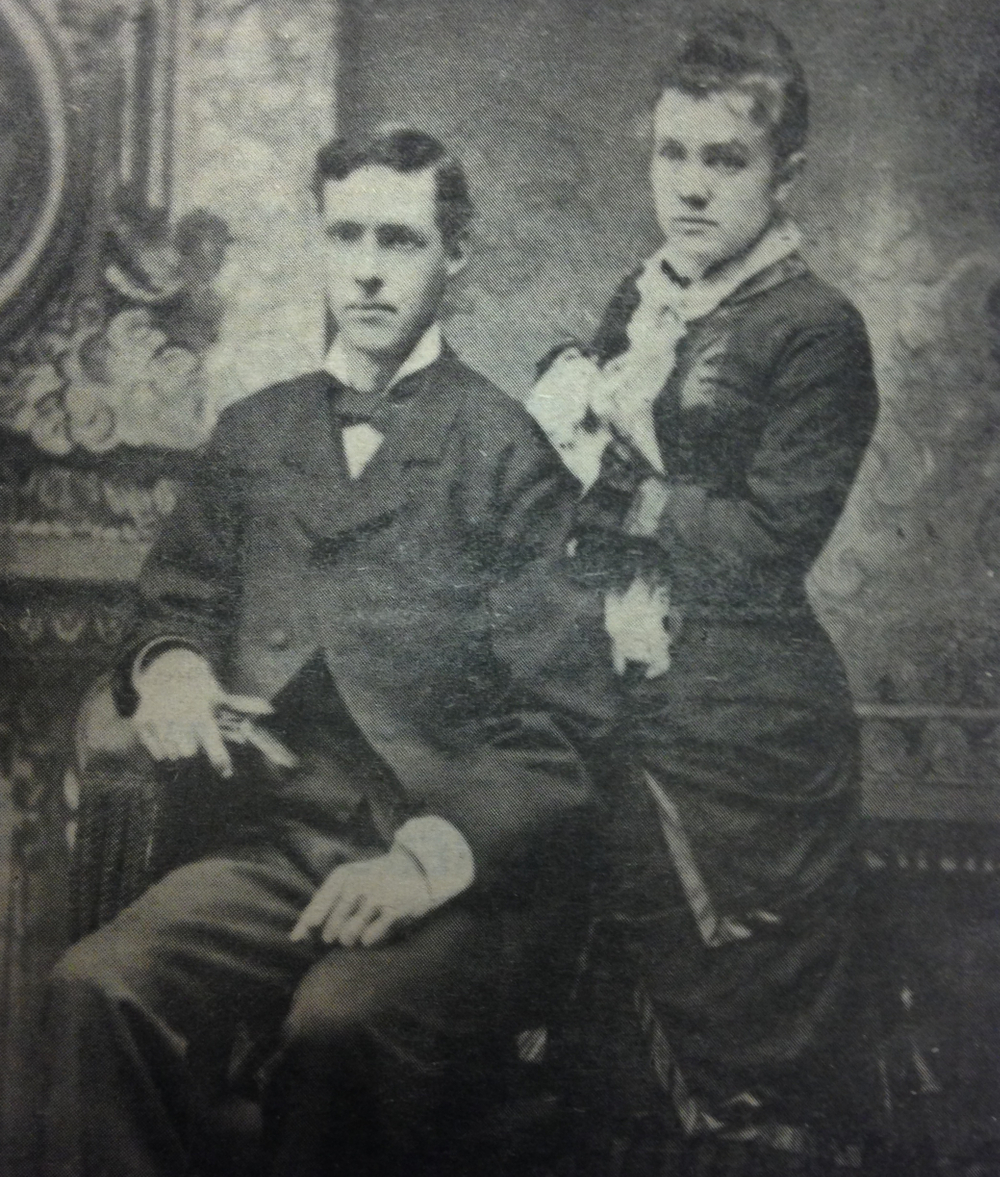 It’s unknown how Fuller crossed over from being a carpenter to an architect, but it happened within the first decade of living in Fort Collins. By July of 1889, the Fort Collins Courier told of the plans he had drawn up for the Kissock and Murray block on E. Mountain Avenue. (This building burned down in 1895 and was replaced by the Kissock building (AKA Odd Fellows Hall) that stands on the south side of Mountain today, just across from Old Town Square.) Fuller began taking classes at the Colorado Agricultural College (now CSU) in 1883, likely to improve his skill in drafting. 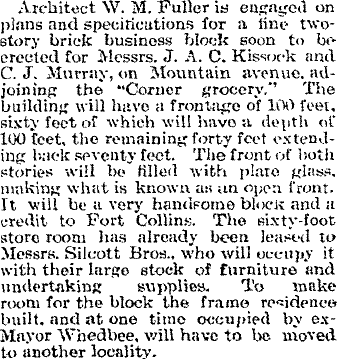 Montie and Anna had eight children, although their firstborn, Thomas Graham, died as an infant. Their second, Graham Welesley, was Archie Call’s grandfather. He and his wife, Geraldine, were missionaries to Siam where they became acquainted with Anna Leonowens, a governess in the court of Siam who was immortalized first by Margaret Landon in her book Anna and the King of Siam, and then by Rodgers and Hammerstein in the musical, The King and I. (I would never have made this connection, even knowing the couple had gone to Siam. But Archie mentioned it and the Margaret and Kenneth P. Landon Papers, 1824-2000 in the Wheaton College Archives & Special Collections confirms a connection.) 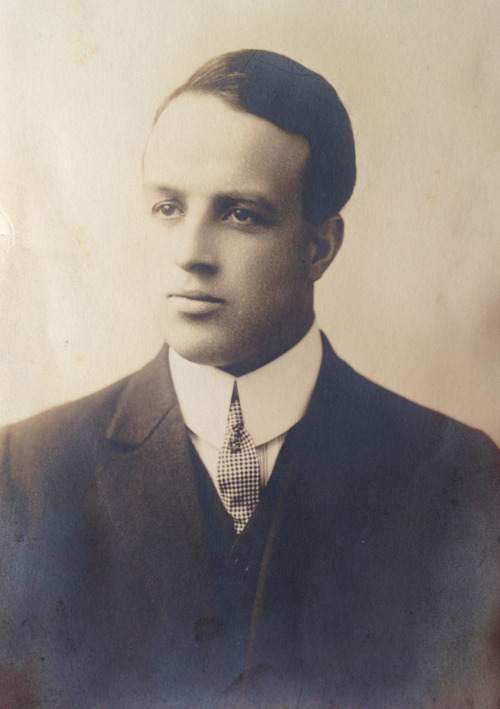 The residential portion of the tour that we took with Archie and Chey ended at the Montezuma Fuller house at 226 W. Magnolia, where Spokesbuzz now has their offices. The house was designed and built by Fuller in 1894 according the biographical sketch of the architect kept by History Colorado. In a circa 1980 handwritten letter from Margaret Hazelton (Fuller’s youngest daughter) to Gary Hixon, then owner of the house, Margaret describes a dining room cupboard where she used to play. She says, 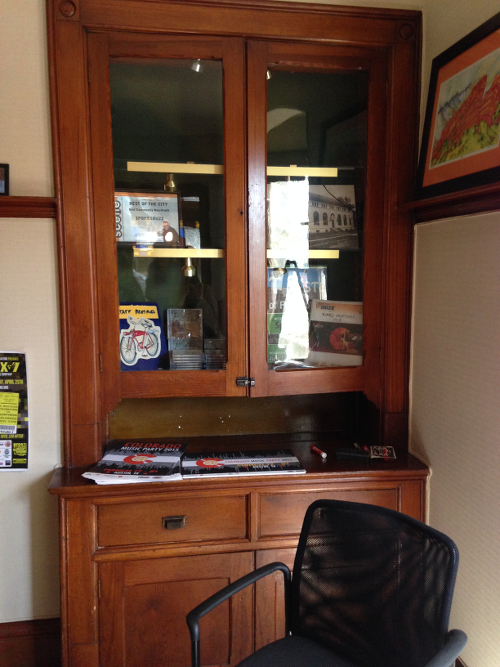 The built in dining room cabinet is still in place in the Montezuma Fuller house on W. Magnolia Street. (I wish I’d thought to move the chair when I took this photo.)

“…in our dining room was a built in china closet. Underneath it were two long shelves closed in with doors. My family gave me those shelves for my very own. So I made it into a doll house. I had the toy furniture and the little dolls. So I use [sic] to sit on the floor and play by the hour there.”

Margaret also talked about playing in the yard by the house. She said,

“When we were kids, the big corner lot on Magnolia and Howes was in grass. So we had a big time romping on it, playing pump pump pull away…. Later my father built the apartment house that still stands there. I have many memories of friends who lived there, etc.

It’s one thing to know that a person built a house… a really beautiful house. But it’s another thing to think of how it was used. All seven of the architect’s children were raised in this house. They knew it not as a historic artifact that is now on the National Register of Historic Places, but as home. The dining room cabinet wasn’t just a beautiful piece of woodworking. It was a doll house. The bricks on the front of the house weren’t a sign of the value of the house to them. They were a place to scribble when they were bored. (Their scribbles are still in evidence thanks to Hixon’s preference towards preservation.)  And as we walked through the house with Archie and Chey, it wasn’t just a monument to one of our city’s greatest architects, it became the home of a great grandpa, and the place in which grandpa grew up as a boy. In other words, it took on a meaning that none of the rest of us can give it. When Archie crossed the threshold, it became a family home again. 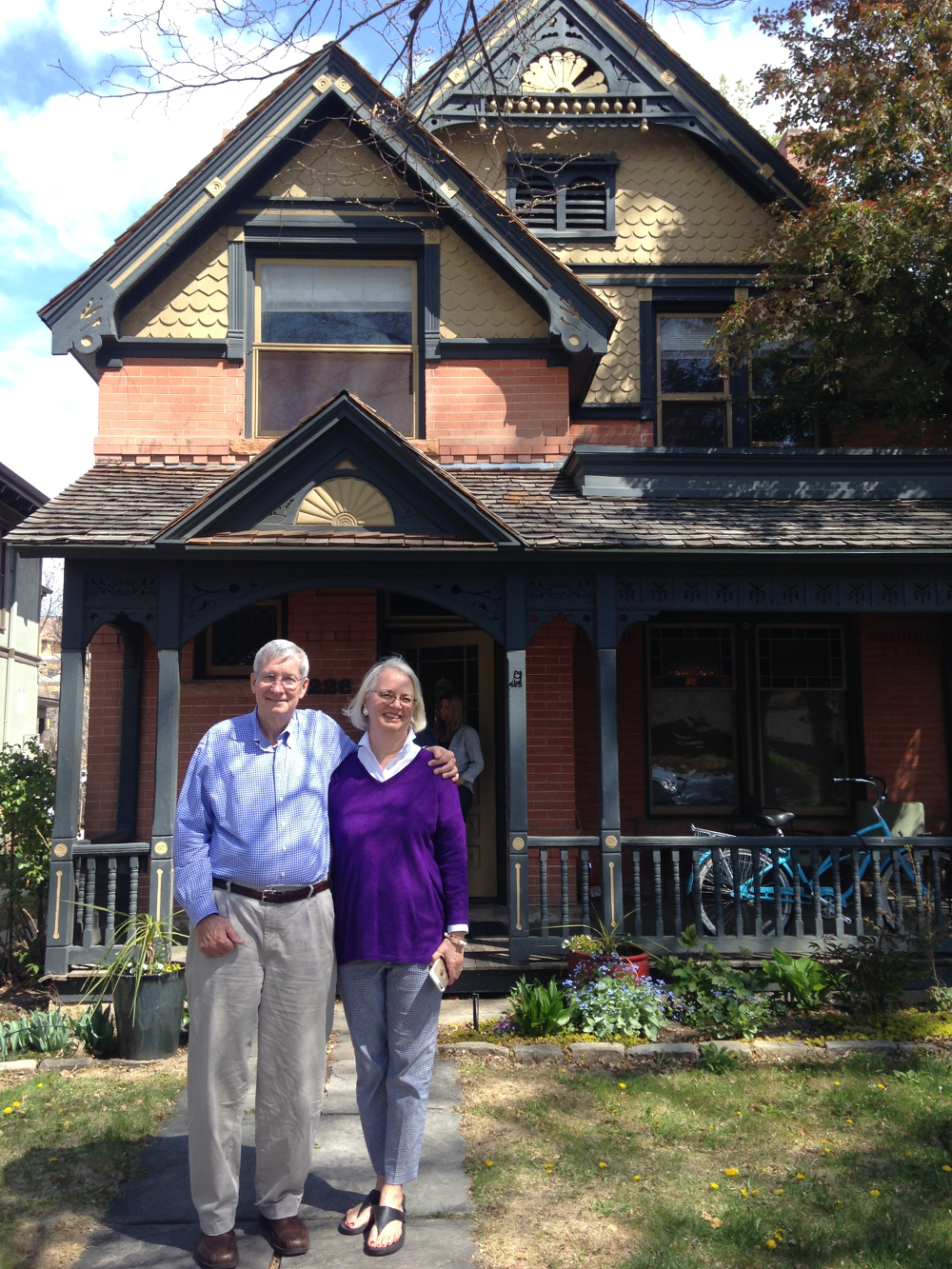 Archie and Chey Call in front of the Montezuma Fuller house on W. Magnolia Street. Founder and executive director of Spokesbuzz, Dani Grant, is in the doorway of the house behind them. 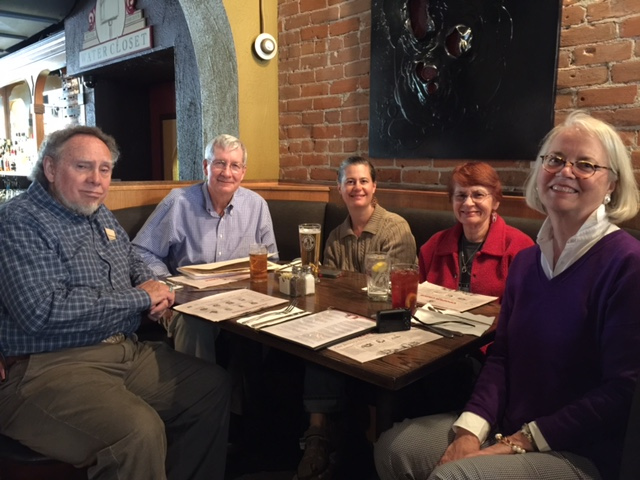 From left to right: Wayne Sundberg, Archie Call, Meg Dunn (That’s me!), Judy Jackson, and Chey Call. (Photo courtesy of Chey Call and taken by our helpful waiter at Coopersmiths.)

Information on the epidemic in Nova Scotia in 1859 was found in A Year-book of Medicine, Surgery, and Their Allied Sciences, for 1862. The reference is from page 54 and is from an article by J. N. Radcliffe entitled, “On the Recent Epidemic of Diphtheria,” published in the Lancet on July 12, 1862. The description attached to one of the photos of Monte Fuller in the Fort Collins Archive also mentions diphtheria as the cause of death of his three older siblings.

Elizabeth A. Bacon wrote a paper published on July 9, 1979 entitled Montezuma W. Fuller: A History of His Life and Architectural Practice. A copy of the paper can be read at the Fort Collins Archive in the Museum of Discovery. From Bacon’s paper I got a sense of the overview of Montie’s life, and I picked up some details and dates, such as the date that Montie moved to Colorado and the time period when the newspaper started to refer to him as an architect. (Though I managed to find an earlier date than Bacon has turned up.)

Wayne Sundberg provided me with a copy of Elizabeth Bacon’s paper as well as a copy of the handwritten letter by Margaret Hazelton. He has an amazing collection of historical materials and I’m always thankful when he graciously shares some of it with me.

I gained access to census records and other details of the Fuller family through Ancestry.com.

Archie found more information on how Lizzie and Montie met up from the History of Laramie County that was published in 1985. Kenneth Fuller added the story of Lizzie and Montie’s meeting in Kingston and of the Graham family moving out to Colorado following Montie’s time here.